Quilt of Valors presented in Exeter 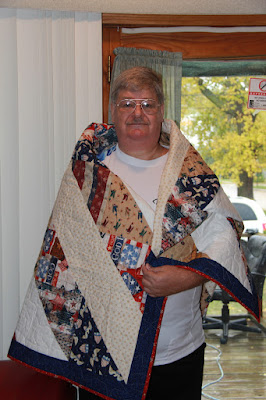 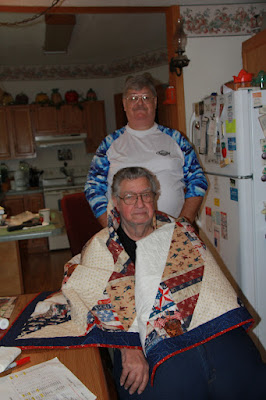 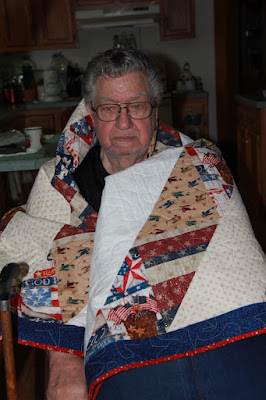 The beautiful patriotic themed quilts were wrapped around the Stevens’ in the home of James Stevens, Sr.

Becker explained that the program was started in 2003 when QOV founder Catherine Roberts’ son was deployed in Iraq.  A dream gave her the idea that quilts from home would be comforting to those serving and so she began to make them to award to active military along with veterans.

Roberts created a non-profit foundation to guide the project.  Since 2003 over 275,000 quilts have been awarded to those who have served.

Becker added in presenting the quilt, “As a grateful nation to thank you for your time in military service. . .and for putting your life on hold for serving your country.”

Stevens Sr. served in three branches of the military.  He first enlisted in the Army in 1957 and in February headed to basic training at Fort Riley, KS.  When he came back home he realized “that wasn’t working.”

When he returned home he joined the See Bees (United States Naval Construction Battalions – C.B. he was under the Marine Corp.) and was part of the reserves in Lincoln.  He served as a mechanic and was honorably discharged from three service branches.

His son, Stevens, Jr., enlisted in the Navy in 1977 and served until 1983.  He went to basic training in Great Lakes, Ill.  He then was sent to Camp Lejeune, North Carolina were he trained as a combat field medic.  In 1980 he was sent to Camp Pendleton, Calif. And remained there until 1982 when he returned home and served in the active reserves.

Again Becker thanked both of the Stevens for their service, “Use this quilt. Don’t put it in a box.  We want you to be comforted by the quilt. Mere words cannot express thank you for putting your life on hold for the fulfillment of duty to a thankful nation.”