A Private Family Memorial Service will be held on Wednesday, July 29, 2020 at the United Church of Christ in Exeter, Nebraska with Pastor Stuart Davis presiding.

Graveside Services will be held in the Exeter Cemetery.
Posted by Leesa Bartu at 5:44 PM No comments:

A Graveside Committal of Ashes will be held in the Exeter Cemetery following the Memorial Mass.

Memorials are suggested to the St. Stephen's Catholic Church or the Exeter Volunteer Fire Department.

Due to Covid 19 restrictions, we will practice social distancing and follow health department guidelines allowing us to have 50% occupancy for the Mass.
Posted by Leesa Bartu at 9:30 AM No comments: 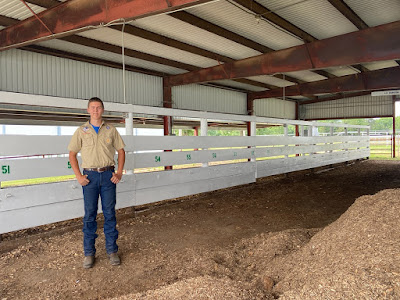 Clint Oldehoeft, a Boy Scout in Troop 218 in Exeter, recently completed his Eagle scout project at the Fillmore County Fairgrounds in Geneva.

Oldehoeft, who shows cattle at the fair with his 4H club, noticed that the cattle barn area had started to look a little rough.  “We would pull staples off the boards to try to make the area look nice.  I wanted to paint our section.  I thought it looked tacky and needed to be redone.”

Besides spending a lot of time in the cattle barn Oldehoeft noted that the cattle barn is the only permanent livestock area.  “It’s a good centerpiece for the fairgrounds.  There is a lot of pedestrian traffic going through there.”

Time and weather had gotten to the inside of it.  “Paint was peeling, boards were rotting.  It was overdue for a freshening,” explained Oldehoeft.

Oldehoeft researched the project and approached the Fillmore County Fair Board for both permission and financial assistance for the project.  His plan was to scrape and paint all of the sound boards and replace rotten boards inside the cattle barn.

Oldehoeft obtained the supplies and the manpower and the Fair Board funded the paint and tool bill.

An Eagle project is never just about the actual service project.  Instead it’s a tool to teach young people how to show leadership, coordinate workers and finish a job, including the paperwork.

For Oldehoeft the biggest challenge was “learning how to estimate time and quantity of supplies needed.  There were a few hiccups and I learned from them.”

Fortunately the COVID 19 virus did not affect his project.  He had a small group of about 14 helpers for the project. Oldehoeft was disappointed that not as many people got to see it at the fair this season but was pleased with the response last week at the slimmed down version of the county fair.  “We’ve gotten quite a bit of appreciation. People are really happy with it.”

Fillmore County Fair President Mark Becker worked closely with Oldehoeft on the project. “This was something that needed to be done.  It wasn’t on the top of our list but it is one we can scratch off the list. Now that it is done it really improved the looks of the building and will extend the life of the boards and make everything look new again.”

“We were disappointed that it was a shortened fair and we didn’t get to utilize it as well as we would have usually.”

Becker was pleased with the interactions he had with Oldehoeft, “Clint was very polite and ran everything by me or one of the other board members. I was really impressed with the work he did on the numbering of the stalls.”

Scoutmaster Dean Bartu was also impressed with Oldehoeft’s leadership during the project, “Clint was very organized and concise in his direction and leadership at the cattle barn.  He has done an outstanding job staying on top of the paperwork that is required for the project as well.”

Earning the Eagle rank has been a long standing goal of Oldehoeft’s since he got his arrow of light in Cub Scouts.  It has been the culmination of a great experience for him, “I have learned a lot in scouts and am very thankful for our troop and everything we have done.  Being able to have a troop here in Exeter was a big deal for me.”

Scouting has helped him grow in many ways, “I have become more outspoken. I have learned leadership. I am not very extroverted but have gained a lot of confidence and learned a lot of life skills and basic knowledge like tying a sheepshank knot.”

The project was challenging but with the help of his family members, troop members and friends who altogether contributed 111 hours, Oldehoeft met his goal and now has one more last board of review before the Eagle rank is earned.

Scouts and friends helped Clint Oldehoeft work on his Eagle project at Fillmore County Fairgrounds.  They paused for a photo once the work was done.  Pictured from the left are Ben Bartu, Wes Ronne, Clint Oldehoeft, Mikey Bartu, Tyler Sysel and Braden Capek (not pictured are William Yokel, Will Yokel, Carol Capek, Laura Sysel, Jill Oldehoeft, Kiley Oldehoeft and Dean and Leesa Bartu). 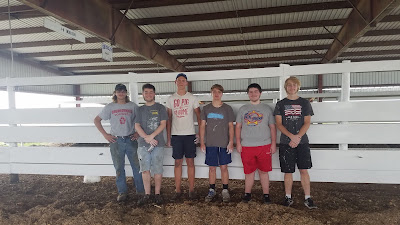 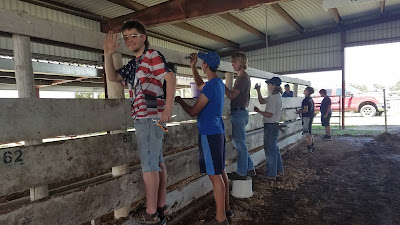 
The Exeter Area Community Foundation has received a $20,000 contribution to its endowment fund in memory of Elmer and Carolyn McCabe from their children Judy and J.J. Dinneen, John and Cindy McCabe, Jim and Linda McCabe and Jane and Dan Drake. This contribution will help meet the challenge grant offered by Dick and Louisa Manning that was received earlier this year. Elmer and Carolyn McCabe were lifelong supporters of the Exeter community.

His father passed away when he was 5 years old. His mom and him moved to Richland, Missouri with his two younger sisters Marvel and Jean. Ed graduated from Richland High School in 1953. On June 5,1955 he married Holly Peters and they resided in Bassett, Nebraska. Edward was in the Army from 1957 to 1960.

In 1967, the family moved to Exeter, Nebraska where they lived with their four children Lynn, Larry, Lyle and Lori. Edward coached little league baseball for many years. He was also a truck driver for the majority of his working life. He enjoyed playing cards with his friends at the Exeter and Fairmont senior centers, loved selling pickle cards on bingo nights, always had a garden, and he enjoyed attending his granddaughters’ events.

A Memorial Service for Ed was held on Friday, July 17, 2020 at 10:30 a.m. at the Farmer Funeral Home in Exeter, Nebraska. Pastor Katherine Rahorst officiated the service. The recorded selections “How Great Thou Art” and “The Lord’s Prayer” were played during the service.

Following the Memorial Service, Inurnment was held in the Exeter Cemetery with Military Honors provided by the William Sullivan Exeter American Legion Post 218.
Posted by Leesa Bartu at 7:30 AM No comments: