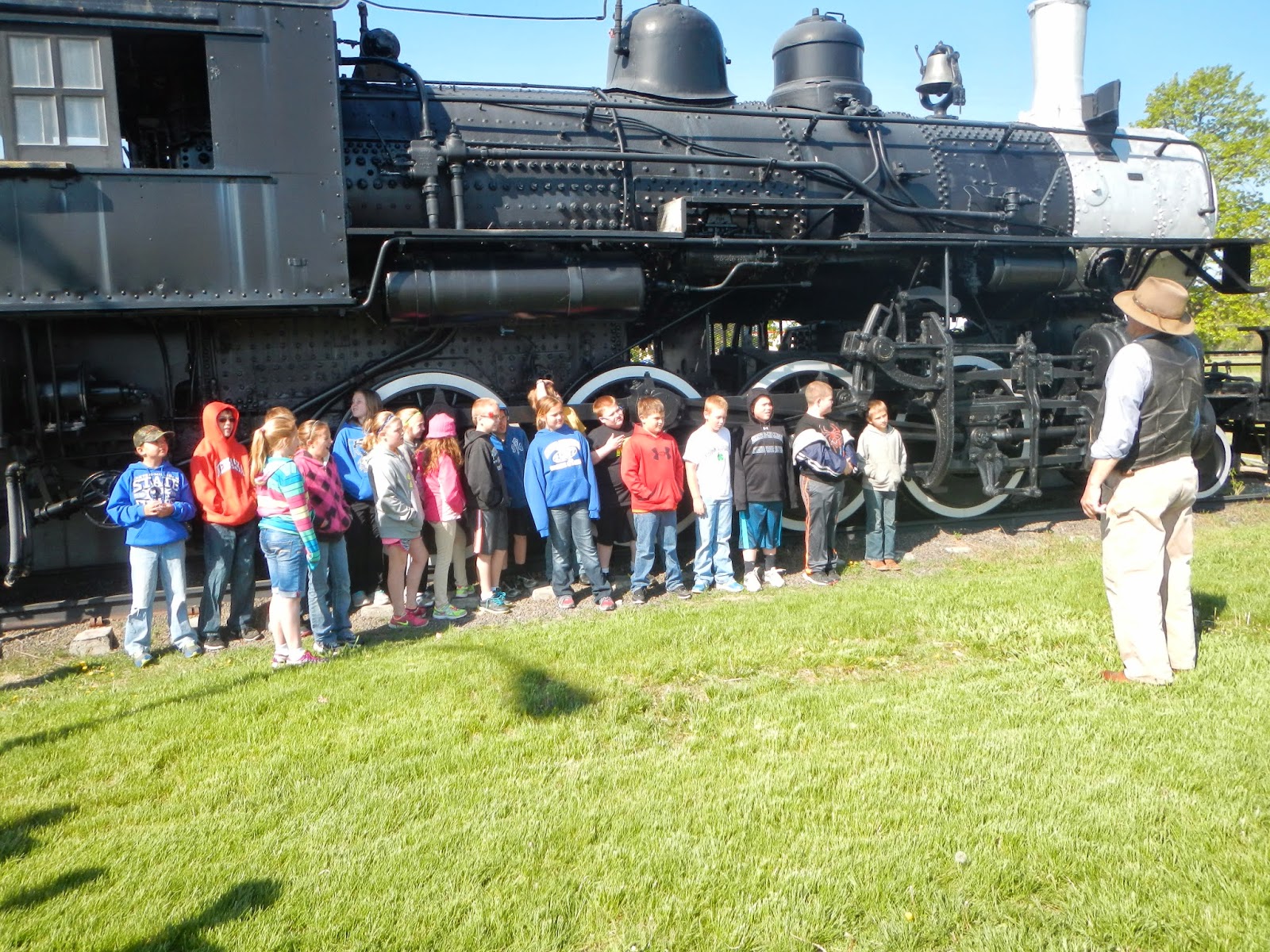 Exeter-Milligan third and fourth grade classes enjoyed a field trip to Stuhr Museum in Grand Island.  The students had a tour about transportation on the plains.  They learned about wagons and trains along with a tour of the prairie town.
Posted by Leesa Bartu at 7:30 AM No comments: 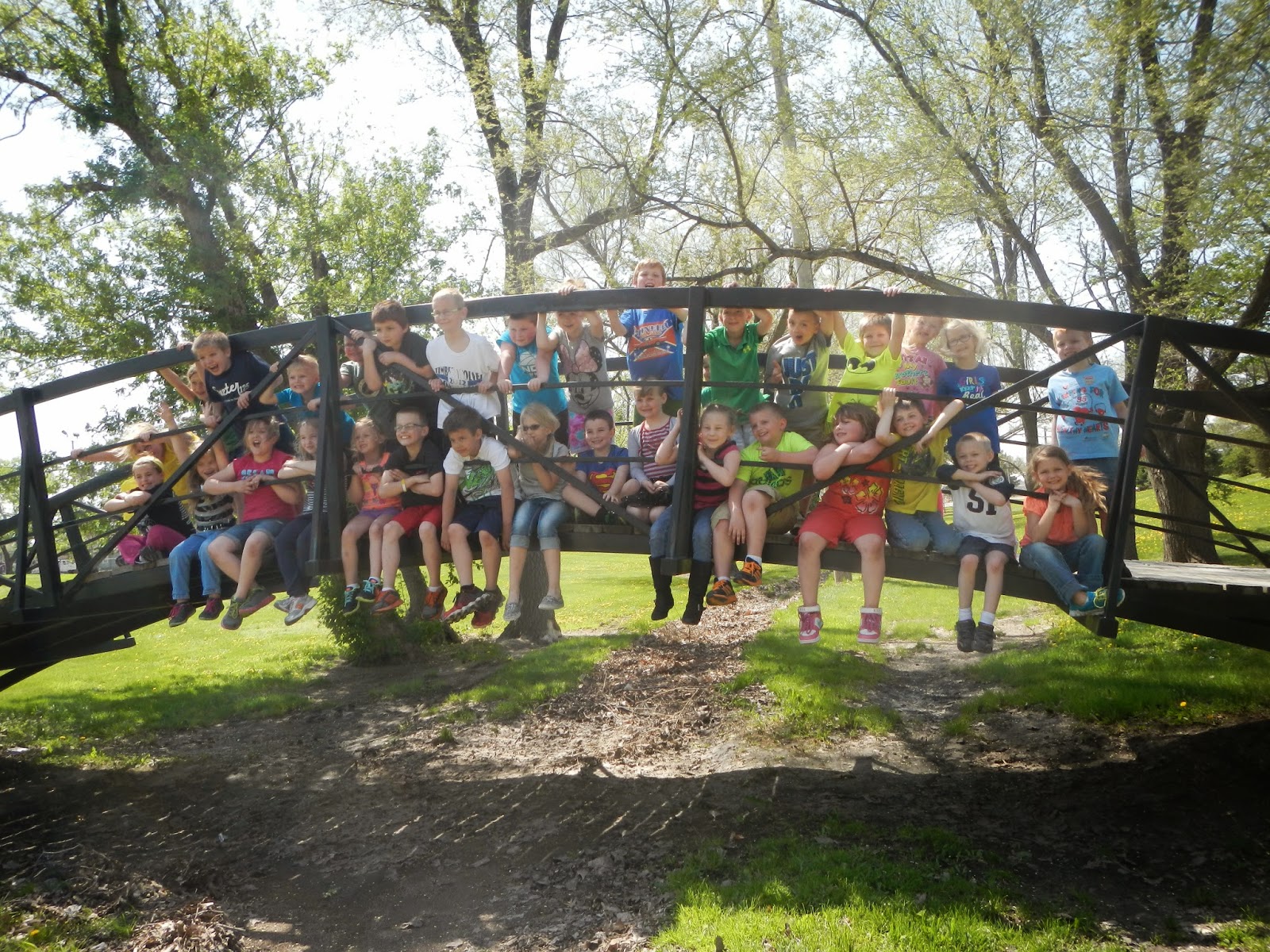 Exeter-Milligan Kindergarten, first and second graders enjoyed their field trip to Aurora May 8th.  They toured the Edgerton Explorit Center and learned about electricity and made bubbles.  For lunch they went to local park and enjoyed playing and a picnic.
Posted by Leesa Bartu at 7:30 AM No comments:

The Exeter Memorial Day program will be held at the Exeter Cemetery on Monday, May 26th at 10 a.m.
Mr. Tim Wilbeck will be the speaker and the Exeter-Milligan Band will perform several patriotic numbers.  Kylie Briske will read the Gettysburg Address and Brooke Manning will share "In Flanders Field."  Taps will be played by Amber Pribyl and Trystan Brandt will play Taps Echo.

In Case of inclement weather the service will be held in the Exeter-Milligan High School Gym.

The Exeter American Legion Auxiliary will be serving coffee and rolls after the service until 11:30 a.m. at the Legion Home. Everyone is invited to attend.
Posted by Leesa Bartu at 7:30 AM No comments: 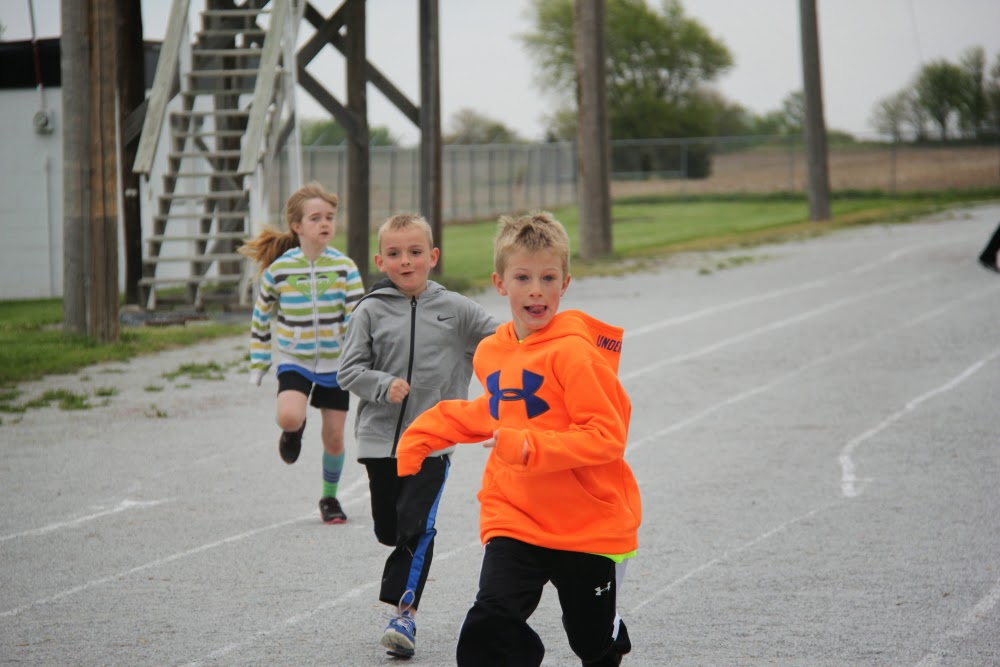 Exeter-Milligan Elementary students enjoyed their field day on Friday, May 16th.  Kindergarten through sixth graders had the opportunity to participate in running and field events.  All enjoyed the potato sack races and the impromptu tug of war. For more pictures see the slide show on the sidebar.
Posted by Leesa Bartu at 7:30 AM No comments:


Patrons in the Exeter-Milligan school district that expected to hear more about the proposed combining of the elementary grades were disappointed as the topic was not even mentioned at the May 14th meeting in Exeter.

Opening the meeting, Dr. Sharon Kuska, school board president welcomed the crowd, “We are glad you are interested in the school system and what we are all about.”

Working through the agenda the first discussion was held on the work study program.  Secondary Principal Lin Schlueter reported the successes of the program to the board, “It went better this year but right now we only have one student interested in the program for next year.”

Dr. Kuska also praised the school’s efforts in helping clean up the storm damage near Cordova, “It was a good idea to incorporate the students into the storm damage clean up.  Service learning is so important.”
Superintendent Paul Sheffield quickly game the credit for the idea and organizing the school day event to teachers Lisa Soukup and Mary Kay Pribyl.

Sheffield reported there was not too much new on the TYKE program planned for the fall.  The playground equipment will be delivered in June and any parent wanting to enroll their student can contact Beth Lightwine in Geneva.

Next under old business was the building project. “There is no building project update because the committee has not been able to get together with the busy school schedule right now,” according to school board member Tim Pribyl.

When the topic of the 2014-25 breakfast and lunch program was discussed Sheffield still was receiving differing opinions from the State and the district’s legal advisor. “Other schools are wanting us to do this and watching what we do.  We could lose over $20,000 in state funding,” according to Sheffield.

Kuska was not in favor of leaving the current government program, “I don’t feel like we need to be the guinea pig on that one, it’s too big of a gamble at this point.”

The board discussed the summer maintenance projects and Sheffield reported that they will move the weight room up to the south half of the small gym for the summer and also purchase a few more pieces of equipment.

The board discussed the two requests to coop junior high football from Friend and Meridian.  No decision was made.

The board approved the non-certified employee contracts with Sluka abstaining.  They unanimously approved admitting East Butler to the Crossroads Conference.

The board looked at bids to replace the furnace in the gym at the Milligan site and voted to go ahead and do the furnace but let the administration and the maintenance department make the specific equipment decisions.
Schlueter and Sheffield reported that they are still working out the 2014-15 schedule along with the extra duty roster and should have that ready in the next week.

After approving the absence of board member Jim Zeleny the board scheduled the next meeting for June 11 in Milligan at 8 p.m.
Posted by Leesa Bartu at 7:30 AM No comments: 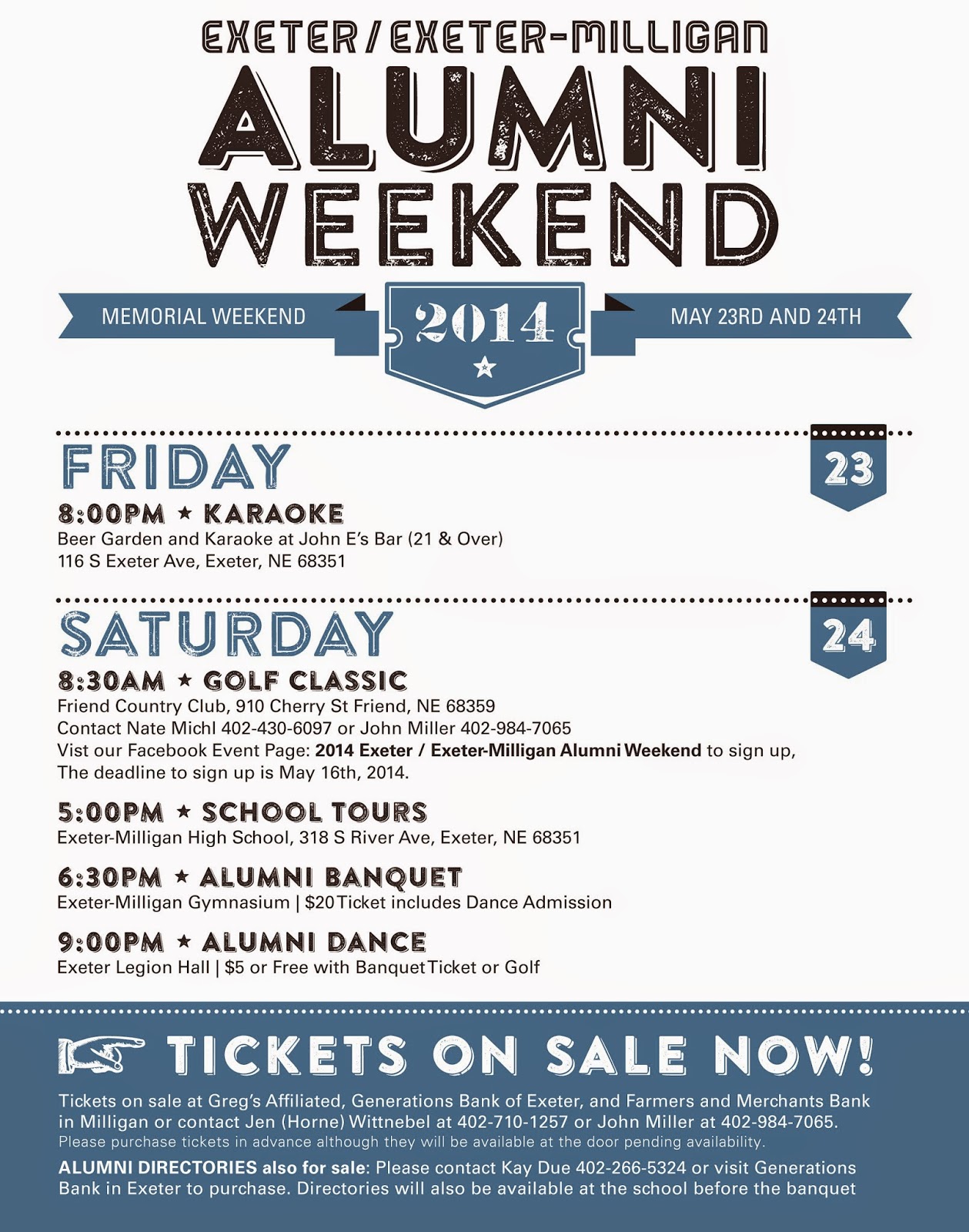 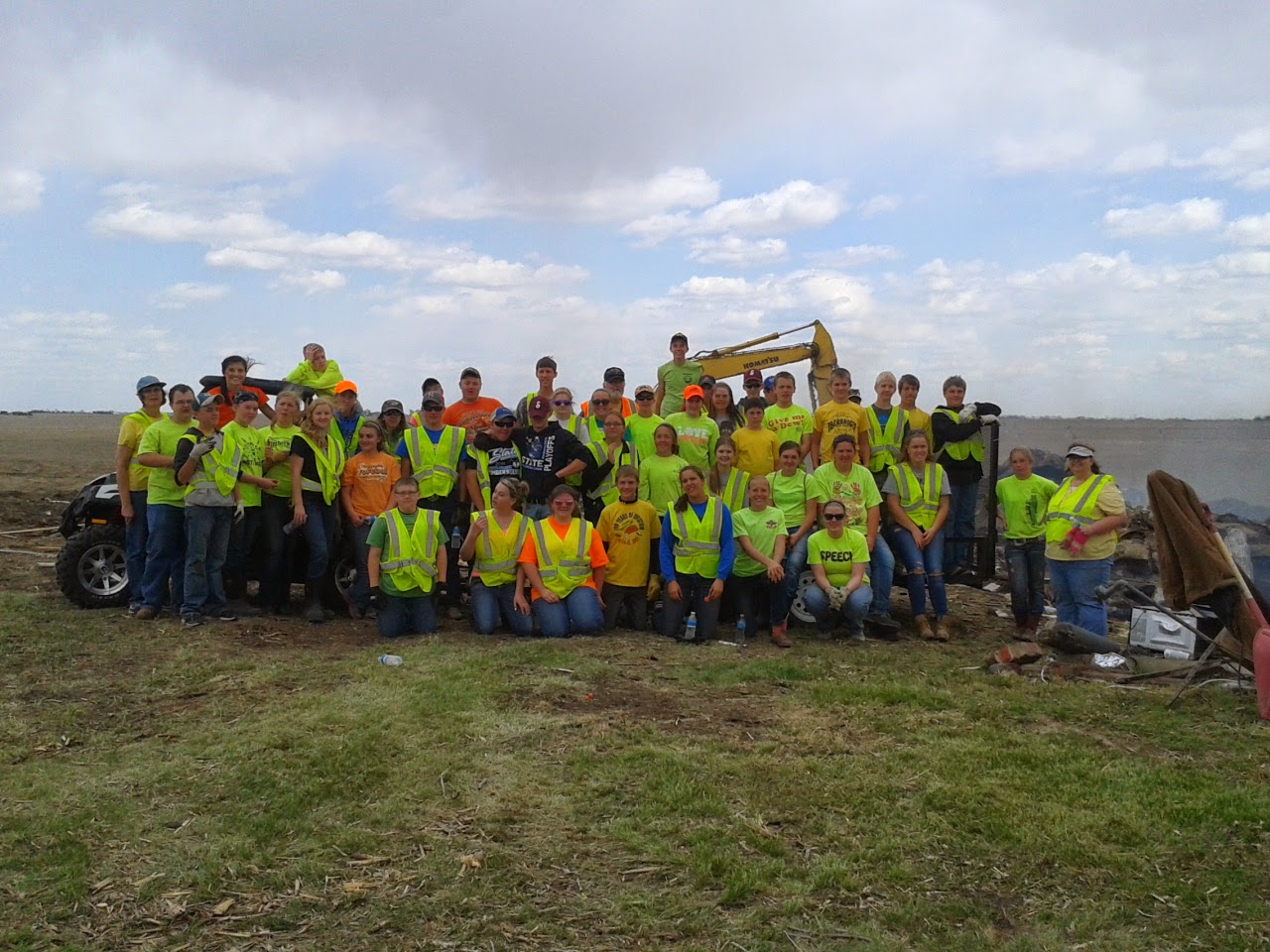 On Wednesday, May 14th, 43 Exeter-Milligan students and 12 faculty/staff members spent the day in and around Cordova, helping those affected by the recent storms.  The group focused on those families associated with Exeter-Milligan schools - including Mark Due, Wayne and Vicki Olsen, and Doug and Dacel Thomsen.  Teachers Mary Kay Pribyl and Lisa Soukup organized the clean-up day.  Pictured is the group at the end of the day.


The Exeter Public Library will have a book sale Wednesday, May 21 through Wednesday, June 4, during the library's regular hours. Books will be available for a free will donation. Proceeds will go towards Storybook Park improvements
Posted by Leesa Bartu at 7:00 AM No comments: