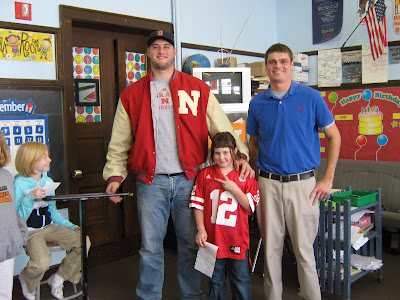 Hopefully a visit to the Exeter-Milligan schools made for good luck for the Huskers at the Gator Bowl. That's exactly what Husker football standout, Lydon Murtha, #76 did on Wednesday, December 17th.
Murtha decided to come and eat lunch with his good friend, Exeter-Milligan third grader, Victoria Androyna. He is a good friend of the Androyna family and at Vicki's request, he came by to enjoy a school lunch, tour her classroom and sign some autographs.
While at the Milligan site Murtha enjoyed lunch in the cafeteria (it was chili and cinnamon rolls on the menu) and meeting some of the students. He also answered their questions. While there he introduced the students to his new puppy, Necco.
The students wished him good luck at the Gator bowl and invited him to visit again any time.
Murtha also stopped at the Exeter site before returning to Lincoln and visited other members of the Androyna family, Deidre Stevens and Robbie Androyna in class. After the Gator Bowl, Murtha plans a return visit to Exeter and possibly visiting the kids at school again.
Posted by Leesa Bartu at 9:30 PM No comments:

Students must be a varsity player or organizational leader who has played a significatn role on the team or in the activity during the season. Students must also maintain a grade point average in all curricular subjects of at least 93%.

Students meeting these qualifications from the Exeter-Milligan school are:

WHAT'S HAPPENING WITH THE POOL CONSTRUCTION 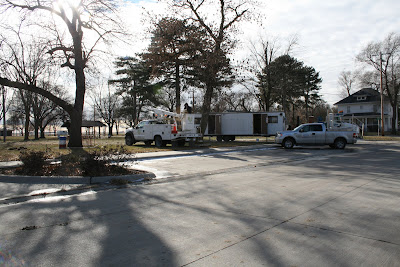 After the construction trailer was moved in, no more equipment has appeared on site. According to the Village Office a construction meeting is scheduled for Tuesday with Christensen Construction and they expect equipment and work to begin as early as next week.
Posted by Leesa Bartu at 9:00 AM No comments: