The Exeter-Milligan School Board began their meeting on Wednesday August 13 without board member Tom Sluka and Superintendent Paul Sheffield.
The board discussed the building and grounds update, specifically the storm damage repair.  They also received an update on the TYKE playground noting that there are fourteen students enrolled in the program this semester.
The board recognized the written agreement from the Friend school to join the Exeter-Milligan junior high football team.  “They are welcome to bring one coach but it will be an Exeter-Milligan team,” noted board member Jim Zeleny.
School Board President Dr. Sharon Kuska confirmed that there were no changes to the junior high football agreement and it was for one year only.
After setting the budget work session and approving Tara Milton as a local substitute the board took a recess until Sheffield and Sluka could join the meeting.
After the recess further discussion was held on the building updates.  Sheffield noted that the carpet was installed but the windows for the shop building had not come in yet.  The window air conditioners in the band room were not working and so an air conditioning unit was installed along with the furnace in the Milligan gym.  The damaged and diseased trees at the Exeter site were removed but the flagpole has not been replaced since it was taken down by the storm.
There was also discussion on replacing the roof and the board decided to reroof using Connor Roofing.
This summer the weight room was moved to the south half of the small gym and with the extra equipment that was purchased there is not room to put the equipment back.  Board member Tim Pribyl was concerned, “Can we do concessions in just half of the small gym?”
Board member Jim Zeleny asked, “Are there any partitions we can put up?”
Sheffield noted “Steve (Briske, Head Custodian) and I have talked about room dividers.  We will have to take a couple of pieces of equipment out just to let the concessions fit.  We will lose the southeast door.  It would be a little bit smaller but it would fit.”
Sheffield reported that the fence for the preschool playground would be installed once a little more cement work was completed in the area.  The board noted that they hoped to remove the barb wire from the top of the track fence when the TYKE fence is installed.
The discussion moved on to budget and valuations.  Sheffield had attended a Cross Roads Conference meeting earlier that evening and reported, “All of the schools in the CRC reported their valuations had gone up.  York County went up about 25% instead of 12% like Fillmore County.  Saline County was around 32%.”
“The State gives us a budget.  Our Special Ed expenses are up as we have had a couple of families move in with some kids with needs.  We were sitting at a 67.5 cent levy but with valuations it should be lower. If valuations stay the same or increase as projected we may not need the levy override again.  Our state aid got cut in half again.”
Right now Sheffield reported that the building fund levy is at .07 cents.
The board asked Sheffield if they could dissolve the JPA since they have no building plans in the works right now.  Sheffield responded that that would be up to the Village.  Chairman of the Exeter Village Board Alan Michl was in attendance and so the Board asked if the Village would be willing to dissolve and Michl answer with a quick and decisive, “No.”
Board member Annette Gloystein asked, “Can we have the JPA and be inactive?”
The answer was yes, according to Sheffield, “We can amend the budget to spend funds but you cannot receive funds.  There should be about $500,000 in that JPA account.”
The board moved to another agenda item, transferring funds to the depreciation account.  Sheffield explained that this was an expenditure fund but the purchases made from the account must be for items that depreciate over time. The board did not take an action on transferring funds as they wanted to wait until the budget is confirmed.
The Fillmore County Development Corporation approached all the school districts in the county asking if they want to become members of the group.  There were given a brochure with different levels of membership by dollar amounts.
“The one thing I don’t like about it is one public tax entity supporting another,” noted Brent Moore, “But the FCDC has done a career day that our students participate in.  They go to different businesses in the county and see what is available in Fillmore County.  It enhances the education experience for our district.”
The board adjourned setting the next meeting for Wednesday, September 10th in Exeter.
Posted by Leesa Bartu at 9:55 AM No comments: 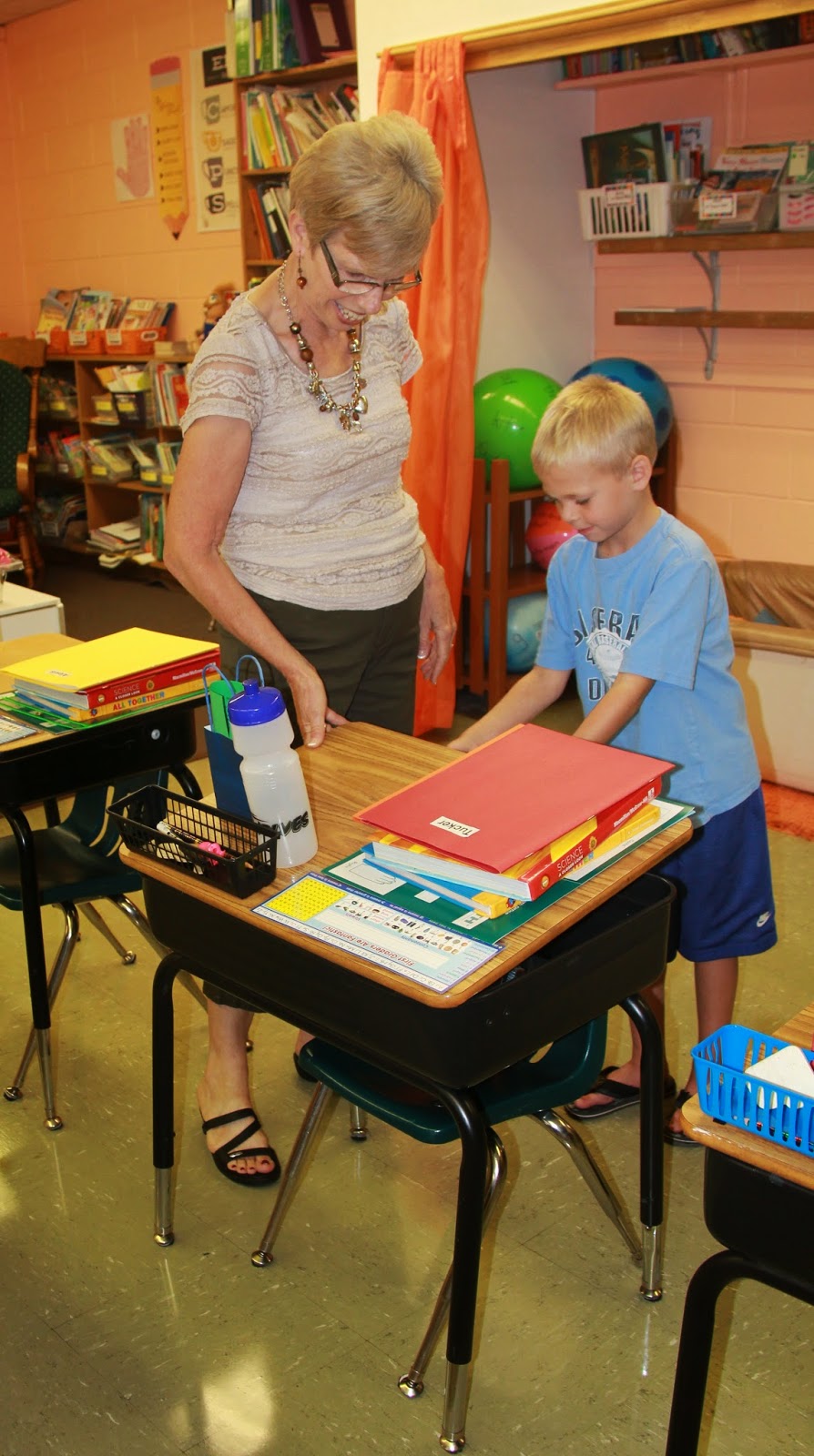 Exeter-Milligan held an Open House on Thursday, August 12th at both the Exeter and Milligan sites.  Hot dogs and Smores were served and students had the opportunity to meet their new teachers and see their classrooms.  Students also were able to bring their supplies and load up their desks.  First grader Kole Svec emptied his backpack and filled his desk with the help of his teacher Sharon Lott.
Posted by Leesa Bartu at 9:54 AM No comments: