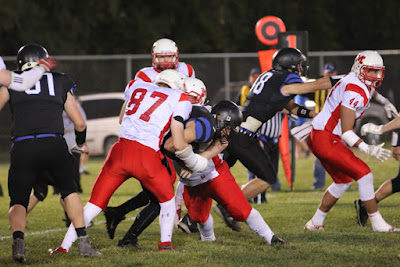 Trevor Luzum held onto the ball through a big Mead rush to gain a few yards.  Luzum had five touchdowns for the Timberwolves in the 50-30 win.  Luzum gets some help from teammate Jos Cremers #81 and Cameron White #48. 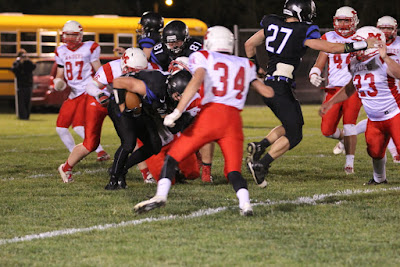 Trevor Luzum held onto the ball through a big Mead rush to gain a few yards.  Luzum had five touchdowns for the Timberwolves in the 50-30 win.  Luzum gets some help from teammate Jos Cremers #81 and Joey Bartu #27. 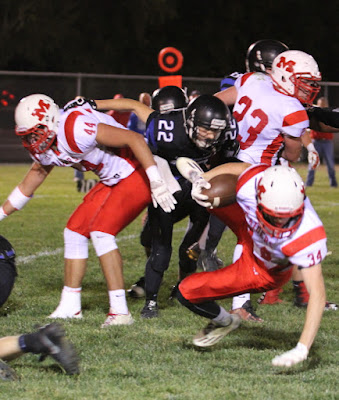 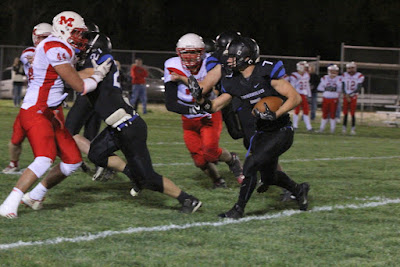 1
2
4         #7 Exeter-Milligan’s Trevor Luzum follows the block of fullback #27 Joey Bartu for some of his 300 yards and six touchdowns during Friday night’s home matchup versus Mead.
Posted by Leesa Bartu at 7:30 AM No comments:

Exeter-Milligan Elementary Takes a Ride Around Town in Style 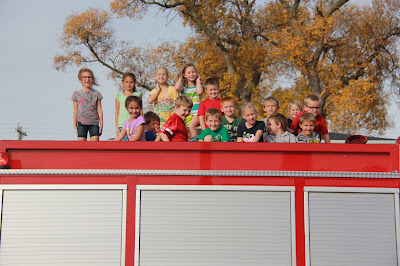 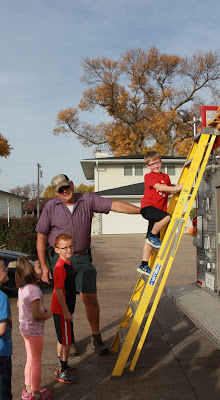 The Exeter Volunteer Fire Department gave the Exeter site elementary and TYKE students a fun Tuesday morning activity as they let the kids explore the fire truck and climb a ladder to ride around town with the sirens blowing and the lights on.  Here, Exeter Volunteer Fire Chief John Mueller helps the kindergarten class up the ladder to ride on the fire truck.  Maddox Milton is on the ladder with Joel Vossler ready to go up next with Mackenzie Jaeger behind him.
Posted by Leesa Bartu at 7:30 AM No comments: 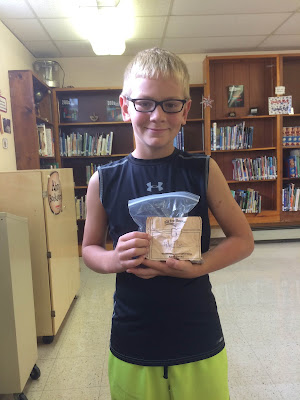 Heroes tend to be people we see on TV or hear about on the Internet, radio or in the newspaper. They attract our attention and usually do something good. We seldom think of a classmate or colleague as a hero.

Exeter-Milligan Public Schools hosted a Scholastic Book Fair during Parent/Teacher conferences. One of the activities the elementary students participated in was “All For Books”. It is a program where students can donate change to help purchase books for any students who may not get a book from the fair. It is a huge success every year.

This year, Tyler brought in a bag of change for “All For Books”. He had to double sack the money because one bag would not support the weight of the money. He said, “my mom was putting my money in the bag and grabbing hand fulls. Finally I told her to just put the whole container in there.” Well, the whole container of money was over $48.00.

Tyler did not realize how much was actually in the bag and when he was told, his reply was, “that’s OK, kids need books”. Tyler said he earned the money by working at the farm and doing chores at home. We were able to purchase 11 books with the money Tyler donated. What a selfless act of kindness by this young 5th grader. Hats off to you Tyler! 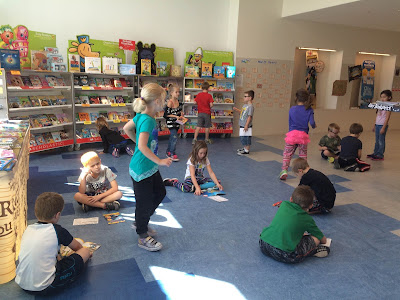 Another Success with Scholastic Book Fair
Exeter-Milligan Public Schools hosted a book fair again this year during Parent-Teacher conferences. Pirates was our theme- Long Live Bookaneers! It was our biggest success to date, taking in over $1,800.00 in sales. The new “Commons” was the location of the fair this year and the traffic flowed nicely through the area. The Fair was set up 4 days before the fair started which gave jr. high and high school students time to browse the books. They did an awesome job putting books back where they found them especially when the fair was unsupervised.

Books were taken as profit instead of cash.  We were able to fulfill all the teachers wish list books for their classrooms which totaled 38 books. Another 133 books were taken from profits for the three libraries.

“All For Books” brought in $140.00 with 43 students and staff donating to the fund. That money allowed us to purchase 28 books for students in preschool to 6th grade.

Thank you to everyone who came to the fair and help make it such a success. Your contribution helped the classroom libraries and the 3 other libraries purchase many books. 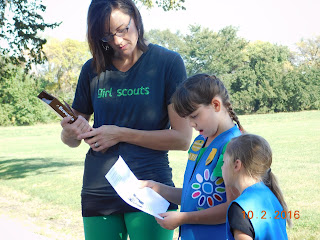 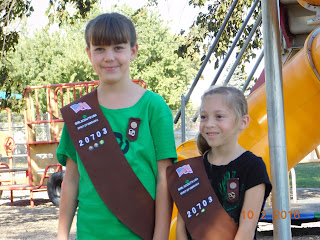 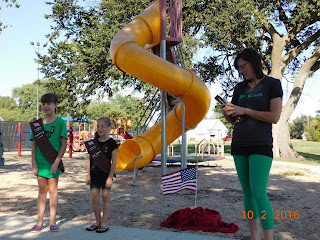 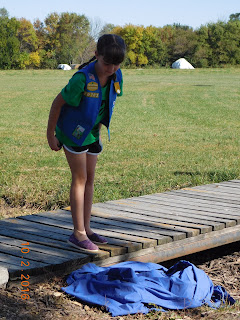 Above, Brooklyn and below, Sydney, look into a "pond" to see the helpers they have become. 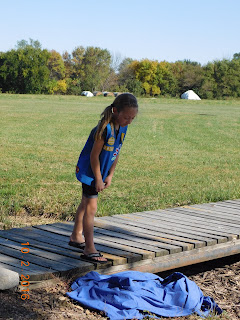 Exeter-Milligan Girl Scout Troop 20703 held their bridging ceremony on Sunday, October 2 at Gilbert’s Park in Exeter.  There ceremony was for the two girls that stepped up from Daisies to Brownies.
The program began with the Pledge of Allegiance and then the Girl Scout Promise. The girls walked over the bridge at the park with their Daisy uniforms on and looked into a mirror decorated to look like a pond.  The girls repeated a statement from The Brownie Story about how the Brownies got their name, "Twist me and turn me and show me the elf, I look in the water and see myself".  In England, the brownies are a mystical creature that people tell stories about, they are supposedly little elves that come in a person's house and help out while people sleep.
Brownies are learning to be helpful and this is why the founders thought it would be a great name for the group.  Each girl switched from their Daisy vest to a Brownie sash, sang “The Brownie Smile Song,” and ended with the Friendship Squeeze.
Posted by Leesa Bartu at 7:30 AM No comments: