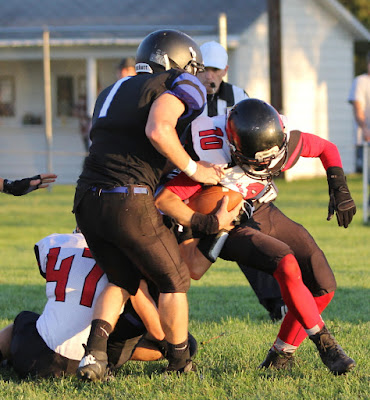 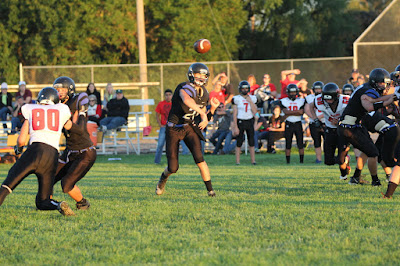 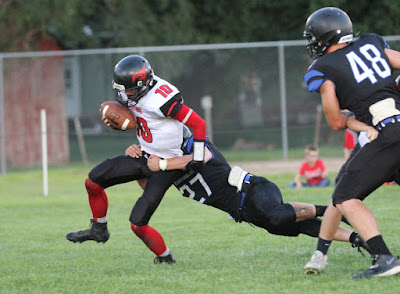 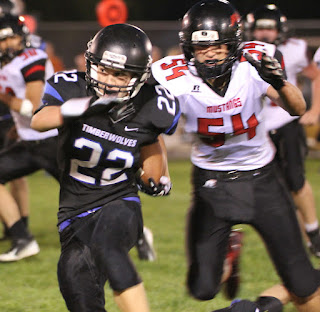 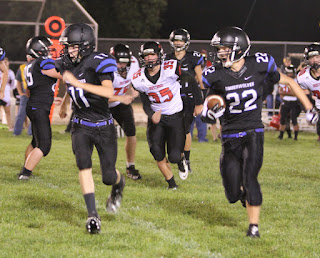 Under the Friday night lights is was obvious in the first set of downs that Meridian wasn't going to even get close to trampling the Timberwolves.  Their first set of downs included a loss for 1 yard, on the second down holding was called against Meridian, they gained back some yardage on the third down but when they decided to kick on the fourth down Cameron White blocked the kick giving Exeter-Miligan excellent field position on their own 17 yard line.

The Timberwolves made quick work of the spot when Trevor Luzum carried for six yards and then ran into the end zone with 9:21 on the clock.  Spencer Pribyl added the two extra points for the Timberwolves and the score was 8-0.

After Meridian went four and punted to the Timberwolves Trevor Luzum took off with the ball and broke multiple tackles to cross the yellow line into the end zone with 7:31 left in the quarter.  Score was 14-0.

The Mustangs had a better start on the next set of downs find th first down but when they decided to go at fourth and one the Timberwolves put a stop to it.  After taking over the E-M team moved the ball steadily down the field with Luzum breaking free for a 20 yard touchdown run. Luzum took the conversion pass and the score was 22-0 with 5:02 in the first quarter.

The Timberwolves marched down the field for another Luzum run for 33 yards.  After making the two point conversion the score was 30-0 at the end of the first quarter.

Meridian converted for a first down before having to punt for fourth and 16 and Luzum returned the ball straight into the end zone.  Unfortunately a penalty at the T-wolf 36 yard line brought the ball back.  Joey Bartu had a run for eight and then crossed the line for a first down.  Mitchell Manning carried for a gain of three.  The T-wolves went back to Bartu who carried the ball before Pribyl went to the air with Colton Bossaller receiving in the end zone. With 8:01 left in the second quarter the T-wolves were ahead by 36-0.

After Exeter-Milligan forced the punt from Meridian again the T-wolves alternated between Manning and Bartu on the ground.  Bartu punched it in to the end zone with 3:45 in the second quarter to bring the score for the first half to 42-0.

The T-wolves started the second half marching down the field again.  Bartu carried for a first down before Luzum cut loose for over 30 yards.  Manning brought the ball to the three yard line but a Meridian face mask penalty pushed the ball to the 1 1/2 yard line.  Manning pushed in for the touchdown at 8:11 in the third quarter.  Pribyl hit the air to find Bartu in the end zone for the two points. It brought the score to 50-0.

The Mustangs got on the board with 5:25 left in the quarter when Beale went to the air to #80 in the end zone.  The Mustangs also put the two points on bringing the score to 50-8.

The T-wolves went back to the ground game but a fumble was picked up by Meridian who headed down the field.  Ryan Sharp made a big tackle for Exeter-Milligan stopping the fumble from making it to the end zone.  The Mustangs decided to go to the air but a Timberwolf face guarding penalty that was protested by Coach Dean Filipi (face guarding is not a high school penalty) brought them closer to their goal line.  After a score by Meridian, Max Zeleny stopped the runner on the two point attempt.

The Twolves capped the evening with a score at the 8 minute mark.  Pribyl completed the pass to Bossaller bringing the final score to 56-14.

Posted by Leesa Bartu at 9:47 PM No comments:

Exeter-Milligan Gets Set for Homecoming

The students and faculty have outdone themselves dressing up for these special days:
Monday - HOME of the Brave - dress in your favorite AMERICA attire
Tuesday - HOME team - support your favorite team
Wednesday - HOMies - Class Colors

There will be a pep rally downtown Exeter at 1:45 on Friday afternoon.

Congratulations to the Homecoming Court 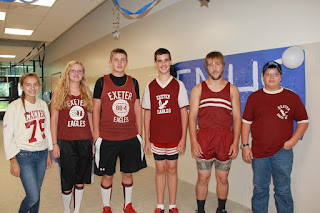 Showing their team pride wearing vintage Eagle attire above and Roosters below! 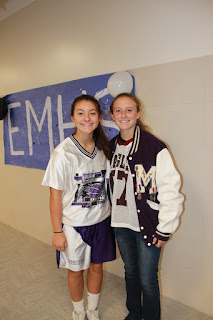 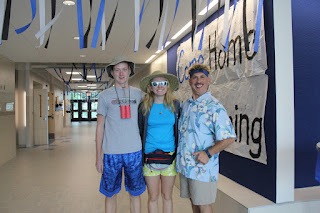 Look at all those tacky tourists! 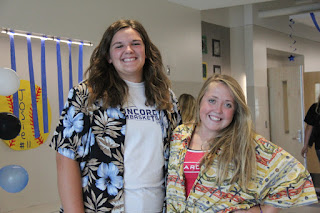 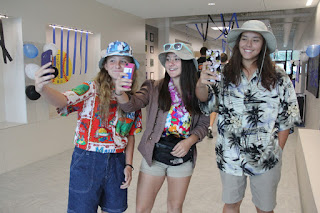 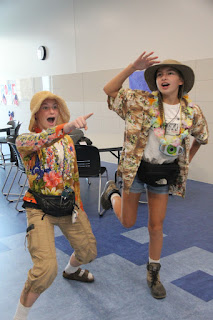 Posted by Leesa Bartu at 4:32 PM No comments:

The Exeter Village Board met on Wednesday, September 7, at 7 p.m.

The Board quickly moved through the agenda approving minutes along with the invoices.

First on the list the board set the budget hearing for Sept 14 at 7 p.m.

Chairman of the Board Alan Michl reported that the village received a grant from the state to do sanitary sewer mapping updates for the village.  The board approved the contract with JEO Engineering to do the project.  The cost will be $13,500 with the grant covering all but $3500.
Village Vice Chair Tim Wilbeck noted , “This really needs to be done.”

Another project the board discussed was finishing off the south side of the village building where the adjacent building was removed.  The bid to finish off the exposed part of the building from one contractor was $2743.

Michl reported that there have been some black mold issues in the city building.  The board was concerned about the health of the employees who currently work in the building.  To start, the board has purchased an air purifier for the facility and is looking for a company to inspect the building.

The board heard an update on the progress of resurfacing the ball field.  Board Member Justin Harre has been working with the vendor and researching the process.  Chairman Alan Michl announced that the Exeter Area Community Foundation will grant $7500 to the project.

Harre explained that the vendor recommends that sprinklers are installed as part of the process.  First, however, the field has to be properly graded.  Harre has talked to Exeter resident Jim Horne who has volunteered to bring a skid steer and laser level to move the dirt at no cost to the ball association or village.

Harre noted that the vendor, “Recommends covering home plate and the pitcher’s mound after each game with a tarp.  We are just waiting to hear on a sprinkler bid and then we can get started. It would be nice to be done before November.”

Clerk Becky Edkamp reported that she had applied for a grant from the Fillmore County Foundation for funds for the field upgrade.

Village Maintenance Supervisor John Mueller  reported that he had done some work on sewer lines on the north side of town.  He noted that they found some issues with some of the main lines and had to have some of them cleaned out.

Village Clerk Becky Erdkamp gave a brief report which included the sales tax figure for June which was $9779.72 and the Keno funds for July which were $312.02

Paul Sheffield reported on the Joint Public Agency  construction project, “The Fitness center is now open and we have sold about 15 memberships.”

Sheffield added that the  landscaping is mostly done and the siding contractor came to work on one entrance and will get to the other entrances soon.

There was a discussion on some issues with water on the road near the addition and some possible solutions before the road is repaved.

The Board entered Executive Session at 7:50 to review employee compensation.  The board returned at 8:10 and Wilbeck made a motion to give employees  John Mueller, Becky Erdkamp, Jessica Votipka, Sharon Cudaback,  Jodee Mika and Keith Mathiesen a three percent increase.  The motion passed and annual raises were completed.

The board set the next meeting for Wednesday, October  5 at 7 p.m.

Posted by Leesa Bartu at 3:17 PM No comments: 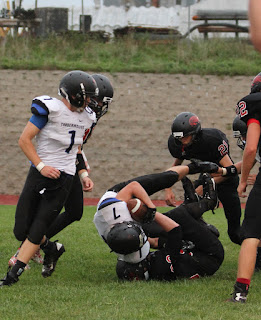 The Timberwolves earned their first victory Friday night at Pawnee City beating the Indians 50-22.  The Twolves came roaring back from a 6 point deficit at halftime to score twice within a minute just over two minutes into the third quarter.
Next week the Timberwolves will host Meridian in their homecoming matchup.


above - Trevor Luzum #7 rolls over a Pawnee City player to gain a few more yards for the Timberwolves. 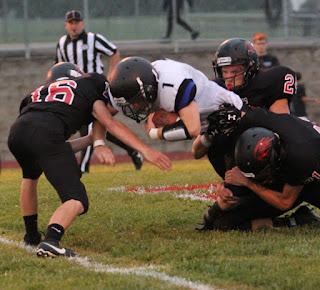 Colton Bossaller (#1) pulls for a few more inches during the light mist in Pawnee City.  The Timberwolves warmed up in the rain but the skies almost cleared as soon as the game started.

Below - Trevor Luzum holds onto the ball for the Timberwolves as he is tackled in a group hug from the Indians. 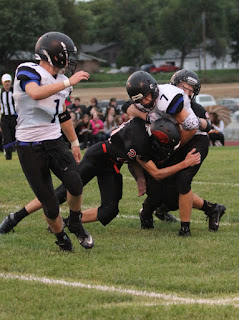 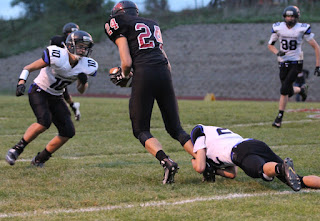 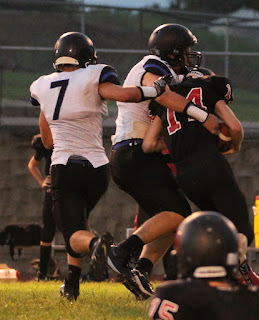 Cameron White stops the Pawnee City ball carrier #14 Nathan Jacobs with Trevor Luzum coming in for back up.

Posted by Leesa Bartu at 1:07 PM No comments: