Exeter-Milligan senior Shane Manning was named one of the co-captains of the 2009 York News-Times All-Area Football Team.

Also named to the team were Seniors Dillon Rischling and Greg Pribyl.
Posted by Leesa Bartu at 5:40 PM No comments:

It was recently announced that several Exeter-Milligan athletes were chosen for the Class D-1 All State Teams.

Kelsey Moore was named to the second team and Taylor Erdkamp was given an honorable mention.

Caroling time of the year 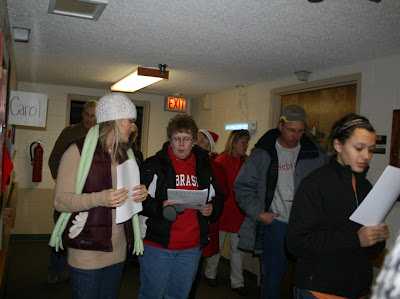 A group of Exeter residents caroled around town Sunday evening despite the icy mist falling and the slick conditions. They brought cheer to residents at the Exeter Care Center as well as individuals around town and delivered plates of cookies. At the Care Center they met up with the youth group from Trinity Evangelical Lutheran Church at caroled together. After braving the chilly weather they all enjoyed supper at the United Methodist Church.
Posted by Leesa Bartu at 7:18 PM No comments:

Keep entering your name in the Exeter Chamber of Commerce Drawings and check out in Exeter!!!

This weeks winners were: