The Exeter Village Board met on Tuesday, November 3 in the village office.

After reviewing the minutes from the last meeting the board examined the bills and approved them.

Clerk Becky Erdkamp noted that the new bookcase is in place at the library which was purchased with memorial funds given in memory for Erma Adamson.

Chairman Alan Michl and Clerk Erdkamp gave an update on the Salazar property.  The Board reviewed a list of expenses which were sent to the property owner who now has 30 days to respond.

Clerk Erdkamp reported that Jim Votipka did not pick up the certified letter she sent about the village ordinance violations. The Village Marshall advised the clerk to send an additional letter stating that the equipment will be towed by Nov 30 if it is not moved.

The inspector has visited the houses the board indicated they might condemn,  but they have not received his report yet.

Michl advised the board that the governor had approved a measure to allow any board member to electronically be a part of the meetings for the rest of the year because of COVID.

The board held a discussion on providing ice melt for downtown businesses again this year.  The cost is about $600 per season, “It would be better to use that, fixing a patch costs at least $600,” noted Michl. “Once it’s pitted, it’s ruined, and it’s done.”

Board member Justin Harre added, “The amount of money we spent on that concrete, this stuff is cheap.”

Under the marshals report Michl noted that there was a break in at a business in town and the board briefly discussed the village officer’s and the sheriff’s department.

Village maintenance supervisor John Mueller noted that the concrete sidewalk at the park was poured but one of the picnic tables under the shelter is missing.

The board set the next meeting for Tuesday, Dec 8.

Also Congratulations to the Exeter-Milligan Football Team as they were named District Champions.  The 4 - 4 Timberwolves will travel to Howells (8-0) on Thursday for a 6 p.m. game.

On Monday evening Exeter-Milligan Superintendent Paul Sheffield presented a power point overview of the district levy override measure that will be presented to voters on November 2nd.

Kelly Sladek, of Cordova, was presented the Outstanding Woman Athlete Award at the 2010 Athletic Hall of Fame Induction Ceremony at Midland University, in Fremont, Neb.  Kelly , a 2010 graduate of Midland and a 2006 Exeter-Milligan graduate, was a four year starter for Midland in softball.  As a pitcher, Kelly currently holds career school records for innings pitched (616.0) and for strikeouts (705).  She also holds the season school record for ERA at 1.23 in 2009.  In 2010, Kelly led Midland to their second ever berth in the NAIA National Tournament.  She recorded a career-high 196 strikeouts in 164 2/3 innings in 2010, an average of 8.33 strikeouts per 7 innings.  For her career, Kelly averaged 8.01 strikeouts per 7 innings.  Kelly earned First-Team All-Conference honors in 2007, 2009 and 2010.  She received Second Team All-Conference honors in 2008.  In 2009, Kelly was also selected Conference Pitcher of the Year and she received NAIA Honorable Mention All-American Honors.  Kelly is the daughter of Bill and Tammy Sladek of Cordova, and she is presently teaching in the Fremont Public Schools.

2,333 votes were cast for the Trump/Pence ticket

691 votes were cast for Biden/Harris

Posted by Leesa Bartu at 6:01 PM No comments: 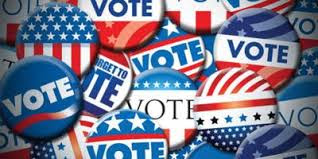 Specific to Exeter will be three running for three spots on the Village Board:

Exeter ghosts and goblins had an easy haul Halloween night at the village’s second annual Trunk or Treat.  Over 25 vehicles popped their trunks and set up their booths to pass out treats to area children.  Special guests were Clifford the Big Red Dog, Carole Baskin and Joe Exotic, the Price is Right team, a fortune teller and some deer hunters (complete with their kill).  The event was organized by Exeter Librarian Lynette Trauger with sponsors Generations Bank,  Sweetwater Bar, Ekeler Repair, Greg’s Market, Exeter Fire and Rescue, Casey’s, Exeter Senior Center and the Village of Exeter.

After walking up and down the block collecting goodies, trick or treaters and their families were welcomed into the Exeter Senior Center for cotton candy and on to the Fire Hall for a hot dog supper. Serving hot drinks was the Pour Horse drink trailer. 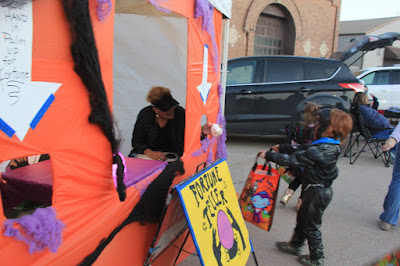 A brave soul gets his treat from Fortune Teller Terri Volkmer at Exeter’s Trunk or Treat. 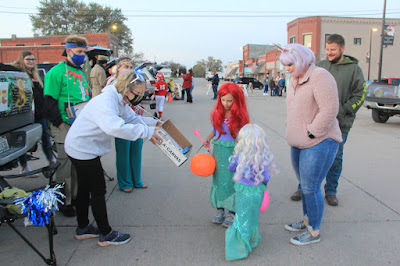 The Kassik family, Tony, Ashley, Saydee and Rylee, play the Price is Right with the Sheffield’s (Paul, Karla and Haylee) at Trunk or Treat in Exeter. 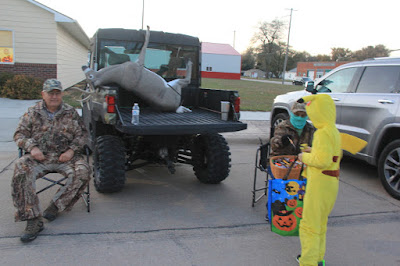 Paul Jensen, left, his “fresh” kill Bambi and Nancy Jensen give a treat to Reed Pulliam at Trunk or Treat. 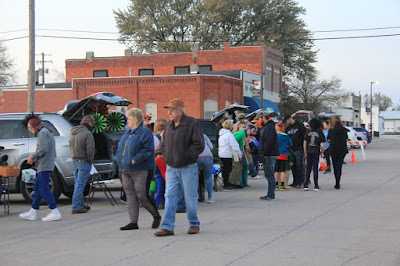 Lots of trunks to find treats in in downtown Exeter. 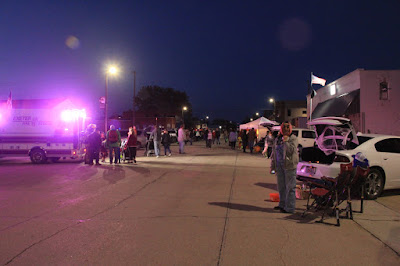 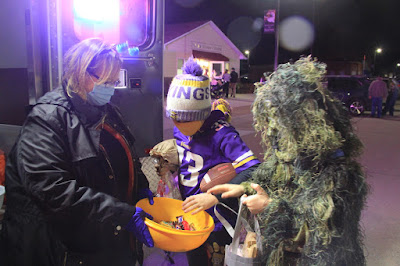 The Exeter-Milligan Timberwolves traveled to Schuyler to meet Wynot for the district final.  The Timberwolves took the first set 25-20 but fell to the Bluedevils in the next three sets 21-25 (yes that is the score from all three of the last sets).  The Timberwolves came back from an 11 point deficit to tie up the score but Wynot pulled ahead in each set. 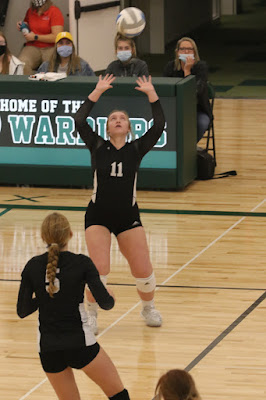 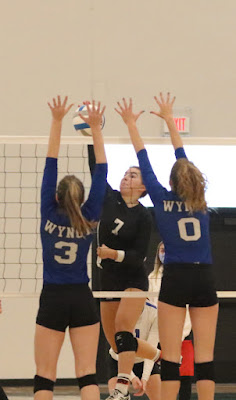 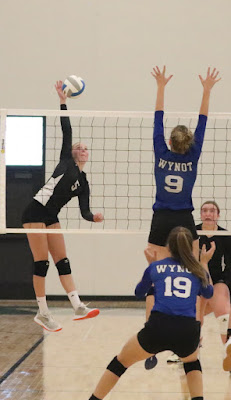 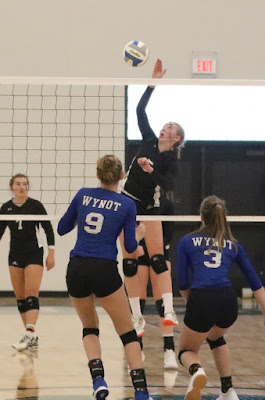 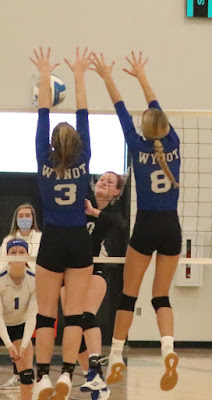 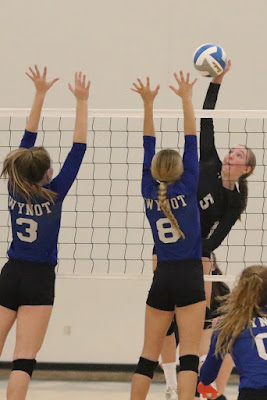 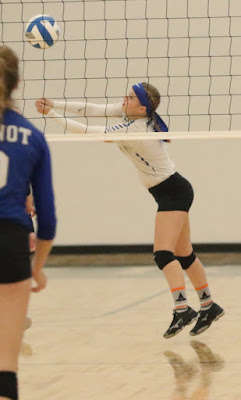 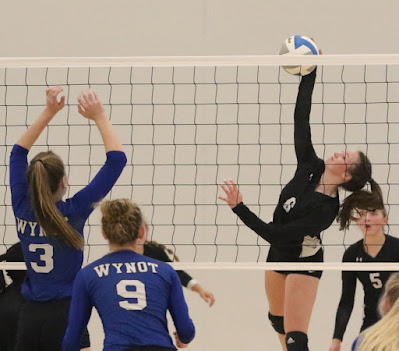 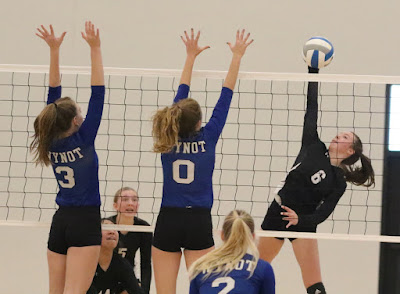 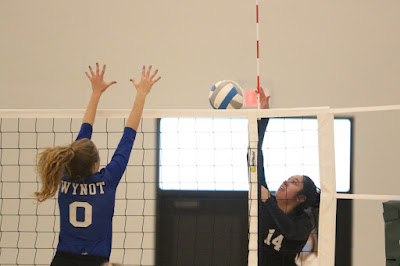 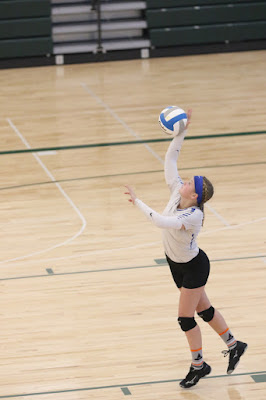 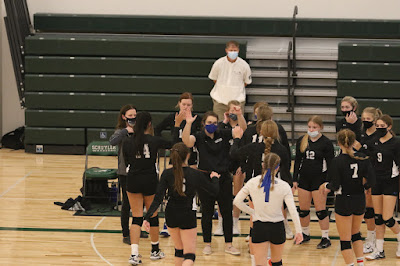 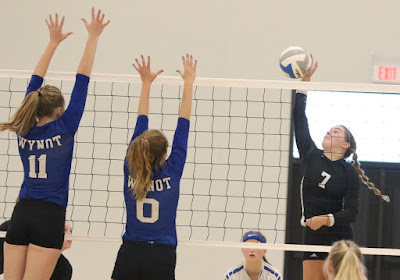 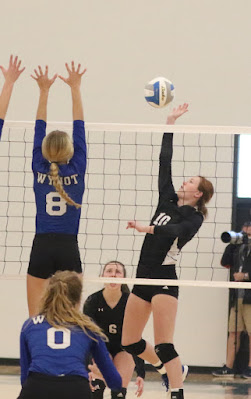 Posted by Leesa Bartu at 8:32 PM No comments:

On Monday, October 26th, Barb Jansen and Marilyn Anderson Red Cross coordinators held the Exeter Blood Drive at the American Legion Hall. Despite the cold snowy start of the day, the goal of 40 units of blood was met.  Forty-five units were donated including six units of Power Reds and 39 whole blood units.  The Exeter Methodist Women's group provided delicious bagged sandwiches and cookies for the donors to take with them following their donations. Alan Songster was kind enough to scoop the sidewalks and Sharon Dyer helped sanitized the chairs, reading material, and pens. Bonnie Cudaback helped at the canteen and Rhonda Maxson and Jim Anderson cleaned the Legion and set the chairs and tables back up. The coordinators “appreciate everyone that came out and helped save a life, we really need each and everyone's help and donation.” The next Blood Drive will be in Fairmont on Monday, December 21st. Call Bonnie Gangstad or go to redcrossblood.org to schedule the time you want!