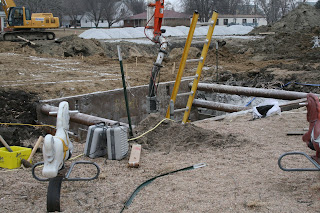 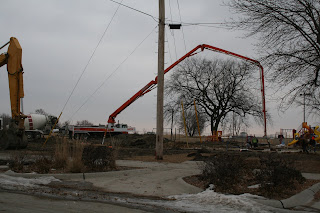 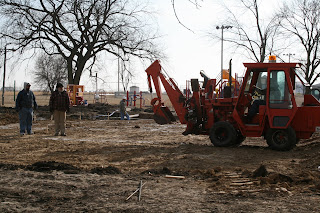 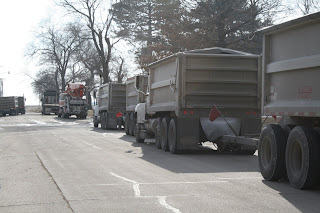 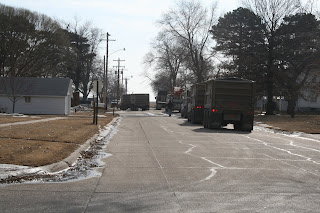 There was a constant stream of traffic and things happening at the pool on Friday. Friday afternoon saw the arrival of the plumbing contractor, Kelch Plumbing who were assisted by Styskal Irrigation (Dave Polak is running the ditch witch while Mike Kelch and Keith Mathiesen keep a watchful eye).

At one point in the afternoon, a semi with a flatbed arrived and construction workers unloaded several long pallets of pipes while a cement pumper truck was waiting on site for things to be ready and then three truck and pups showed up full of sand. It was a traffic jam in Exeter!

By using all of these local vendors the pool is paying for itself in part. Everything delivered will have Exeter sales tax on it and that money goes toward the pool.

Later in the afternoon (around 3:00 p.m.) the first cement was poured. One cement truckful was pumped into the area close by where the baby pool used to be. As soon as I find out what it will be I will post that information.
Posted by Leesa Bartu at 9:01 PM No comments: 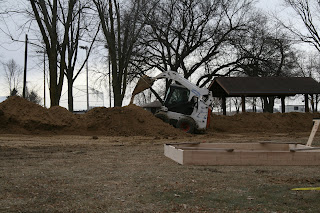 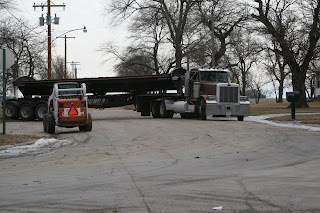 There was lots of activity at the pool construction site on Wednesday. Horizontal Boring continued their excavator work and brought in some more equipment for safety. In addition three dump trucks, including Bill Volkmer's big sidedumper brought in clay all day long. The clay was dumped and then rearranged by two skid loaders throughout the day until a front end loader took over the job. Some more sidewalks were removed that were adjacent to the playground equipment and some special fabric arrived that might possibly be the "insulation blanket" that will keep the ground from freezing so construction can continue if the weather turns.
Posted by Leesa Bartu at 9:18 PM No comments: 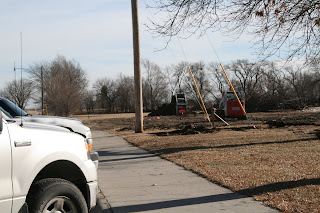 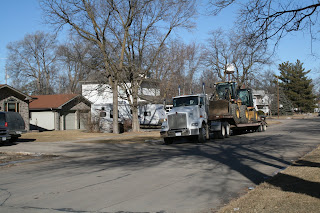 Construction began in earnest on Tuesday as subcontractor Horizontal Boring along with their subcontractor WyAd out of York started moving some serious dirt. Bill Volkmer and John Mueller drove dump truck after dump truck of clay onto the site to become a more stable fill for the construction. Two skid loaders kept busy all day arranging the giant piles of dirt along with an excavator removing some more of the old pool residue. Kopcho's also dropped off two large roll offs for construction trash. 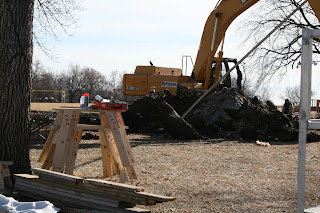 Posted by Leesa Bartu at 9:14 AM No comments:

The Exeter Chamber of Commerce meeting time has changed. They will now meet on Wednesday at 5:15 p.m. at the fire hall. There will not be a meal served. Please come and give your input on how we can improve our businesses in Exeter!
Posted by Leesa Bartu at 1:46 PM No comments:

Exeter-Milligan played 7-0 Deshler in the first round of the
Holiday tournament losing by a score of 58-47. Heather
Pribyl led Exeter-Milligan with 19 points and 11 rebounds.
Tina Kassik chipped in 11 points.

In the 3rd place game Exeter-Milligan came back with a win
against Cross County 65-55. Leading the T-wolves was Kelsey
Moore with 14 points. Heather Pribyl had 13 points and 13
rebounds. Amber Filipi and Claire White each scored 11
points.

Exeter-Milligan got a nice win last Friday as they defeated
McCool Juntion by a score of 55-20. Leading in scoring was
Amber Filipi with 15 points. Heather Pribyl followed with
10 points 8 rebounds and 6 steals. Tina Kassik had 9
points.

Exeter-Milligan's next game is in the Holiday tourney at
Dorchester. They play Monday December 29 at 6:30pm against
Desher in Dorchester.
Wednesday, December 17th

Heather Pribyl led in scoring with 11 points and 13
rebounds.
Kelsey Moore followed with 6 points and 3 steals.

Exeter-Milligan is at Home FRIDAY vs McCool Junction


Senior Maddy Emshoff led in scoring with 12 points. Kelsey
Moore had 11 points and 3 steals.
Heather Pribyl had 8 steals in the game.


Record 0-2. Next game Home VS Hampton on Friday in Exeter
Posted by Leesa Bartu at 9:40 AM No comments: