What to recycle and where can I recycle it???


In Exeter, our recycling trailer holds:

Where can I recycle things that I can't recycle in Exeter?

Here is a good site to recycle many things like computers, used oil, hazardous waste etc.
recycle nebraska.org
Posted by Leesa Bartu at 7:30 AM No comments:

The August Newsletter, which contains all pertinent school information, is available online at www.emwolves.org,.  If you would like a newsletter mailed, please contact the school at 266-5911

An Open House, at each site, is scheduled for Monday, August 12th from 5:00 PM to 7:00 PM.  This is a time to meet with teachers, students may finalize schedules, and everyone may tour the facility.  Parent packets will be distributed at this time.

The first day of school for students will be Wednesday, August 14th with a dismissal time of 2:21PM.

CHILDFIND: Exeter-Milligan Public Schools has the responsibility to identify, locate, and evaluate all children (birth through age 21) with disabilities regardless of the severity of their disabilities, and who are in need of special education and related services. If you have questions or concerns about a child, please contact the Superintendent of Schools (402-266-5911) concerning the district's special education referral process. 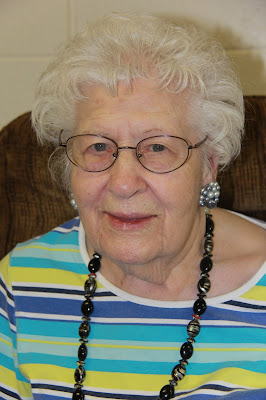 In 1913, milk was just .35 a gallon, potatoes were .01 a pound and on July 19 of that year, Esther Margaret Eurich was the fifth of twelve children born to John and Nellie Eurich on the family farm south of Friend, Neb.

Esther celebrated her 100th birthday with family and friends on July 19th at the Exeter Care Center where she now resides, but she lived and worked for all of her life in the Friend area.

Esther grew up on the farm and was the oldest healthy girl in the family of twelve children, so as she grew up she was responsible for a lot of the cooking and cleaning along with raising some of the younger children. As more children came, Esther also was entrusted with the care of her oldest sister, Leona, who was in ill health and died at the age of 12.

Even with the extra responsibilities placed on her she still found a way to get in trouble.  “I would have more fun in the closet.  I would sit down and be quiet and while I was in there I would tangle all the shoelaces up, tying the shoes together.  With that many kids trying to get ready for church it was a real mess,” recalled Esther.

Esther shared some of her memories growing up near Turkey Creek, “It was right near our pasture, there was a shallow, sandy place and we would wear some old clothes we didn’t care about and go in the water.  It was kind of dangerous, but we got by with it.  We knew our limits.”

There were always chores to do on the farm and Esther claims she didn’t mind most of them except, “I didn’t like washing the cream separator.  All of those paddles and it had to be so clean.”

After country school, Esther headed to Friend for high school graduating in 1934, as she took a few years off of school to help with the children at home.  After high school Esther met Virgil Conner and married him in 1939.

“I grew up with so many kids and then when I got married in 1939 it seemed like I had nothing to do,” explained Esther.

She and Virgil ran the Green Top Café in Friend for a few years, but ten years went by and according to Esther “somehow we got tangled up with this adoption thing.”

That somehow turned out to be a great thing for Esther and Virgil.  They adopted daughters Ruth Ann who was 6 and Dorothy Faye who was 4 from the Child Saving Institute in Omaha.  They girls were blood sisters who had been given up for adoption.

“It was a pretty special day when the girls came.  My days got a lot busier.  Ruth went to school but I had to keep an eye on Faye, that’s for sure.”

Unfortunately the girls just enjoyed the family life for eight years as Virgil Conner died in 1957.  After he died Esther met Joe Deterding and married him in 1960.

Daughter Ruth Ekeler explained, “When Mom married Joe he inherited a 16 year old and a 14 year old and he had never been married before.  If you look at pictures of him his hair turned thin and gray not too long after they married, but he accepted the whole shebang.  He was a very patient man.”

Esther always did what she knew best, cooking and caring for lots of people.  She and Joe ran a locker in Friend for a few years, but late in the 1960 Esther began cooking at the Friend school and stayed there for close to 25 years.

Esther has seen so many changes in the world in her 100 years but one of the highlights to her, “Having hot water is one of the most amazing things I’ve seen.  We always had to heat water on the stove.  So many people had to carry water in but we had a pump and a reservoir on the stove which helped so much on wash day.”

Esther had a few words of wisdom for living a long life, “Keep busy.  Get out and go.  Walk. Every day was special to me.”

She walked every day in Friend until she was 85.  “I enjoyed my life.  We had to walk a quarter of a mile to get our mail.  When we heard that Model T coming with mail we would hike down there.”

Also important to her was her church in Friend, the United Church of Christ, where she received her 75 year member plaque the she proudly displays in her room at the care center.

Her easy going nature, which is reflected in her favorite saying, “What is, is,” probably has contributed to her long life as well.

Celebrating 100 years didn’t seem to fluster Esther. She has enjoyed looking at the many cards she received for her birthday and had a great party with her daughters Ruth and Faye, who were joined by many of her 11 living grandchildren, her 21 great-granchildren and one great-great-grandchild. 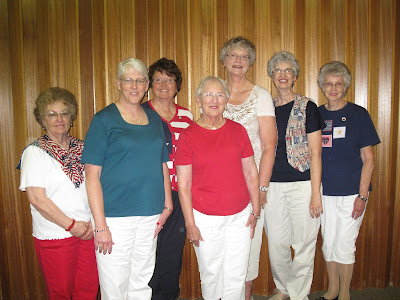 The GFWC District IV Woman's Club Workshop was held at the First Evangelical Lutheran Church in Wilber on July 19, 2013.  There were 30 present from seven clubs.  Mary Keller of Wilber welcomed the group to Wilber and Karen Chapman, District IV International Outreach Chairman, of the Exeter club, gave the response.

Nancy Galaway, District IV President, of Fairmont, presided at the meeting.  NFWC District Chairmen gave reports of new projects in each particular division, and ideas for each individual club to carry out in the coming two-year administration.  Information was handed out to the members for each clubs' favorite program and project.

Pat Gage, NFWC State President, of Aurora, spoke about the GFWC International Convention held in Hollywood, Florida, in June.  She also reported that Elaine Oldehoeft of the Exeter club had won an award for the picture she entered in the "Year in Pictures" contest, which will be included in the 2014 GFWC Woman's Club calendar.

Jan Jones, NFWC President-Elect, of Omaha, announced the upcoming events, and about clubs' reporting.
Revised corrections and additions to the Standing Rules of District IV were read, voted upon and were passed.
A tasty luncheon was served by the Wilber club.

The program followed, with Karen Statham of Second Chance Pups, and her dog "Sheroz".  Nebraska State Penitentiary inmates volunteer to obedience train dogs from different shelters in Nebr.  They are initially instructed by a certified AKC/CGC evaluator, who instructs the inmates on dog training skills.  It takes 9 weeks to train these dogs and they are then available for adoption to area families for pets.  It is a true form of rehabilitation for inmates. The Woman's Club members thoroughly enjoyed "Sheroz" as she mingled amongst them.  The members gave "Sheroz" treats after she obeyed a command, and one member even received a kiss.  Members brought treats and toys for the program and gave a monetary donation.

The Fairmont club extended an invitation for next years' workshop.