The Exeter Alumni Association is in the process of updating our Directory.  A new directory will be printed this Spring and will be sold at the 2013 Alumni Banquet.  Directories are printed every 5 years.

If you or you know of graduates who have moved or changed their name in the last 5 years, please submit updates to Kay Due.  Each class will be contacted as well.  You can email information to Kay Due or call or text to 402-641-3512. You may also find Kay on facebook under Kay Ruhl Due.
Posted by Leesa Bartu at 7:30 AM No comments:

All Postal Customers in the Exeter area should have received a letter about the POST plan.  The letter includes a survey that all customers should fill out and return in the postage paid envelope.  If you want to continue to have a post office in Exeter you should return the survey and mark #1.  This needs to be returned by March 4.

The post office has announced that they will hold a meeting at the Exeter Fire Hall on March 18th at 4:30 p.m. to answer any questions and provide additional information about the POST plan.  At the time of the meeting they will be sharing the results of the survey.  IT IS VERY IMPORTANT THAT EVERYONE RETURN THEIR SURVEY!!! Mrs. Julia Polak's 6th grade science class  at Milligan studied forces and motion.  The teach constructedf "skiers" out of ice cream sticks and pipe cleaners.  then they tried different substances that they thought would reduce friction between the skier and the plexiglass "slope."  This particular example used body powder as a lubricant. 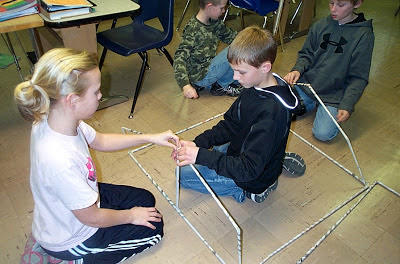 Katherine White, Mitchell Manning, Blake Steuben, and Trever Zelenka build the "attic" of their newspaper-rod structure during the STEM activity.  They are Mrs. Julia Polak's sixth graders at the Milligan campus of the Exeter-Milligan Schools. 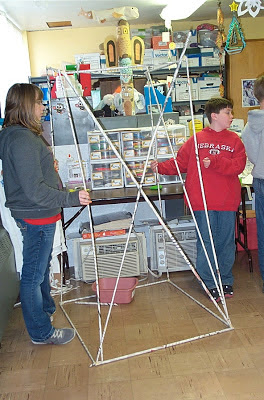 Exeter-Milligan 6th graders participated in some STEM (Science, Technology, Engineering, and Math) activities.  In this one they had to roll newpapers in to long narrow "rods," and build a structure that the whole team could stand up in.  Here, Macy Due and James Becker hold on to their structure until the rest of the team can put in the supports.


The Exeter Village Board welcomed Exeter-Milligan Superintendent Paul Sheffield to their meeting Wednesday to talk about the possibility of a joint effort for a wellness center and gym to be used by the school and the community.

In September of 2012 Sheffield approached the board to see if they would be interested in pursuing a joint effort for a wellness center and in this meeting once again explained, “Under the joint powers act if two government entities come together on a project they can issue bonds.”

Since September a committee of three Exeter-Milligan School Board members and Village Board Members Mitchell Schlegelmilch and Alan Michl have met and discussed both the facility needs of the community and the school.

Sheffield came to the Village Board asking if they were willing to commit to working with the school on the project, “What does the village have to do? Just give their blessing.”

After looking at the current facilities and assessing the needs, Sheffield and the committee have compiled a square footage estimate which would now include a performance gym, weight and fitness area, locker rooms, offices, concessions and restrooms which total 31,185 square feet.

According to the paperwork that Sheffield reviewed in the village board meeting the facility with an estimate of $3 million and with a 15 year bond the total estimated annual payment would be $234,000 at an interest rate of 2.3%.

Sheffield reassured the Village Board that there would be no additional cost to the tax payers and the Village would not be required to make any contribution toward the project. “With our current levy we have 8.8 cents going into the building fund, we would reduce the building fund by 5.7 to pay for the bonds and the school would use the other 3.1. If we do this, your tax statement it would just show another line noting joint powers bond and the building fund amount would be reduced by the same amount.”

The budget amount for the project is estimated at 3 million but plans have not come back from the architects yet to see if the wish list will fit into this budget.

“This would be built on the current practice football field with a connecting hallway to the existing school building. We want to make changes to allow the current gym to be more fine arts friendly and would move the music department into the small gym,” explained Sheffield. “We would also use an existing building in Milligan to do a wellness center there.”

Village Board member Schegelmilch responded “It kind of seems like a no brainer to me.”

Sheffield summed up the project, “We want to enhance the educational experience for our kids.”
The Village Board responded positively to working with the school board and Sheffield reported, “As far as timeline goes, it will take approximately three to four months to create the joint entity and my hope is to be up and running by Jan 1, 2014 with the new facility.”
Posted by Leesa Bartu at 7:30 AM No comments:

Mrs. Sharon Lott's first graders are doing many hands on activities in Saxon Math. We are now shopping at our classroom store-- buying two items, writing price and item on blank receipts. We use pennies and dimes to add two-digit numbers with regrouping by trading ten pennies for a dime. We are using real money which makes it more fun. 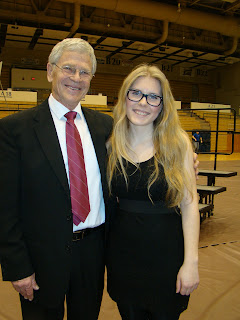 Madeleine Ensrud, an exchange student at Exeter-Milligan, recently participated in the UNK Honor Choir.  She is pictured with Dr. David Bauer, director of this year's Honor Choir.