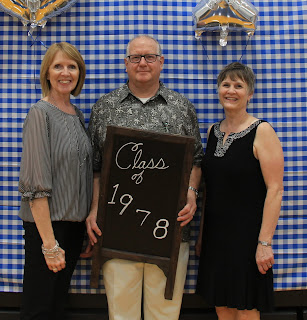 The Exeter Class of 1978 from the left:  Sue Rhodes Kittinger, Greg Yound and Lori Bristol
Posted by Leesa Bartu at 7:30 AM No comments: 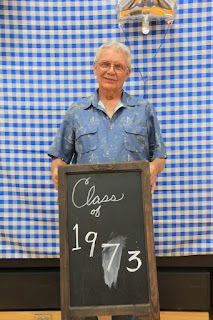 The Exeter Class of 1973 representative was Kenny Soukup.
Posted by Leesa Bartu at 7:30 AM No comments:

The Exeter Village Board met on Tuesday, June 5th with a maze of fresh concrete around the building.

The board started their meeting without board member Justin Harre who arrived at 7:30 p.m.  After they noted his absence the board approved both the minutes of the last meeting along with the invoices.

JEO employee Andrew Wilshusen gave a report on the downtown and street construction project.  “The new water main is in service but they haven’t abandoned the old main yet.  They are working on the sidewalks on the east side of the street in the block south of main.  The light poles aren’t in yet
but when they come in they will install them right away.”

When asked where the street crew would head next Village Maintenance Supervisor John Mueller responded “Burlington will be next.  That’s what they told me today.”

Wilshusen continued,” So far it’s going pretty smooth. The only hiccup has been the gas service on Union but Black Hills has been working well with us on that.”

“The intersection of Seneca and Empire has been completed with just a few finishing touches left.  It has a one year warranty.  Each individual street and block will have its own substantial completion and warranty.  It will be inspected in 11 months.”

The board approved the substantial completion of the intersection of Seneca and Empire.
Michl noted how much higher the street level of Union is now than it was before.

Wilshusen explained, “There will be a change order because we took out a foot of mud out of the street and put a new subgrade in. The subgrade underneath it was basically mud.”

The board approved the first payout on the street construction in the amount of $71,008.06   It did not include the first payout for the downtown items which was $166,545.92.  This amount covered the partial removal of the sidewalks and the new sidewalk installed as well as all of the light pole removal and trenching of wiring for the new lights.  It also covered the pieces of the water main that have been placed.

Wilshusen explained that the next two invoices were for Thiele Geotec, Inc. the contractor that JEO uses to do all of the cement and soil testing.  The downtown portion of the ill was $1186 downtown and the street portion was $1460.00.

Wilshusen reported there was an issue with the rock face on the front of the Legion building when they pulled the sidewalks out.  Some of the rocks cracked and came out.

Vice Chairman Tim Wilbeck responded, “Let’s pour the sidewalk and if they keep those pieces of sidewalk maybe we can put them back in.”

The next item on the agenda was a request from property owners Dean Bartu and John Mueller.  They requested that the city work with them on removing trees on several properties so that a power line can be placed.  The Board discussed what options were available and decided Michl will call Perennial and discuss the options.

Maintenance Supervisor John Mueller reported that the pool has been acting up.  Have had issues with airlocks and power issues.  Michl reported he had advised the pool manager to drive by every morning to make sure the pool filter is working.

Mueller noted the water main is at a depth of eight to nine feet and the board discussed this placement.  Mueller noted that he is keeping the summer help busy.

Clerk Becky Erdkamp reported that sales tax for March was $10081.46 keno for April was $1376.51.  She noted that she had finished the insurance audit. She and Chairman Michl met with JEO to review some ideas on what to do with the current office space.  The current space was built in 1974 and the village “received a grant to do that planning phase.  But that doesn’t mean we will go forward with it,” explained Michl.

He continued, “If we decide to do this some of those grants we can get is money for the library only, not the city.”

Visitor Rhonda Stokebrand asked where a new building would be located.  Michl responded it would go where the old Tag Factory was, “We are in the early stages.  We cut it down quite a bit.  We want to make it clear it’s just a study we are doing.  We had a guy in to look at our facilities and he told us we need a library twice as big as what we have.  He also recommended that our employees need to be not so vulnerable to the public.”

The board set their next meeting for Tuesday, July 10th.

Posted by Leesa Bartu at 8:07 PM No comments: 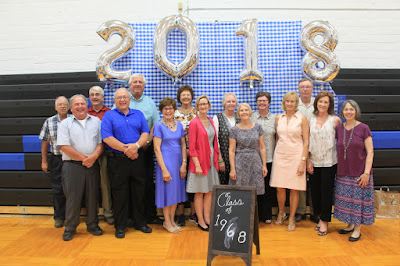 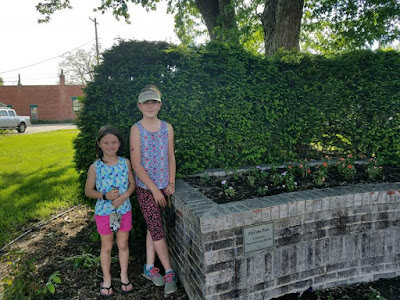 Two Exeter Girl Scouts in Troop 20703 planted flowers at the McCabe park in downtown Exeter recently.  Pictured are Chezney Kanode (left) and Brooklyn Oldehoeft.  The girls did some clean up in the park before the planted the flowers.
Posted by Leesa Bartu at 7:30 AM No comments: 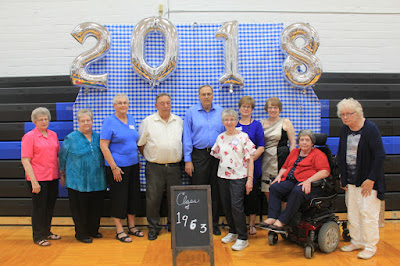