Students at Exeter-Milligan won gold medals by competing in the 2021 Mini-Olympics! The Olympics was the culminating activity and a celebration for participating in summer school these past ten weeks. Events at the Olympics included the plastic straw javelin throw, cotton ball shot put, paper plate discus throw, right-handed marble grab, left-handed sponge squeeze, and big foot. At each of these six events students estimated how well they thought they would do and then measured the actual outcome. The difference between these two numbers their score for that event. These activities provided practice with estimating, measuring, subtracting and loads of fun and laughter. Facts about the history of the Olympics was shared and a story called “Olympig” was read.

Summer school at EM was open to all kindergarten through second grade students this year. EM summer school has been quite popular through the past years. This year, 89% of these three classes attended the weekly program. During summer school students rotated through four sessions including reading comprehension, reading fluency, writing and math. The intent of this free program was to practice skills learned during the school year while making it fun for the kids! 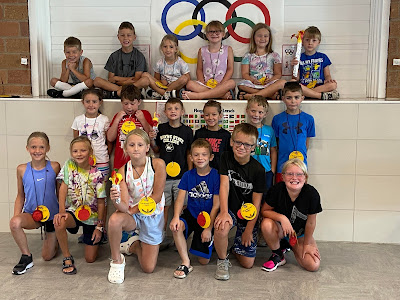 For six weeks this summer the Exeter United Methodist Women's group opened the Garment, Gadget Giveaway store on Friday and Saturday mornings and gave everything away. Donations of clothes and household goods were also accepted and were graciously received.

Roma Rhodes who spearheaded the group's efforts was overwhelmed with the outpouring of generosity of the community, "The tables were piled high, over a foot deep with clothing for all sizes."

The Exeter Village Board met on Tuesday, August 3 in the village office.

After the minutes and invoices were approved the board welcomed new owner of the Twisted Wrench Bar, T J Slezak, to talk about his application for a liquor license.

The board recommended to the state that the liquor license be approved. Also, Slezak applied for a keno license transfer from John Graham to himself.  The board accepted the transfer.

The board also recommended the liquor license for new corporate manager for Casey’s General Store in Exeter.

The board reviewed the one and six year road plan.  Clerk Becky Erdkamp noted that she has contacted JEO to make several corrections on the map.

The board didn’t discuss the plan much but Michl reminded them, “The six year is our wish list.”

The board discussed librarian wages. The board set the starting wage for all three of the librarians at $12.00 an hour.  They discussed a possibility of raising wages for those who attain accreditation.

The board approved replacing the trap house.  Harre commented,”We have a lot of use out there so it’s a good deal.  Thank you for letting us do it out there.”

Maintenance Supervisor John Mueller presented a photo of batting cages that he saw in Deshler.  The board was very interested in updating the batting cage area in Exeter.

Erdkamp gave her report with sales tax for May at $10856.80 and June Keno at $293.12. Erdkamp reported that they received the first half of the CARES act funds, $46,193.80 and it was deposited into a village savings account.  She also reported that the pool will close August 7 as the managers and staff goes back to school. The board set the next meeting for Wednesday, September 8. 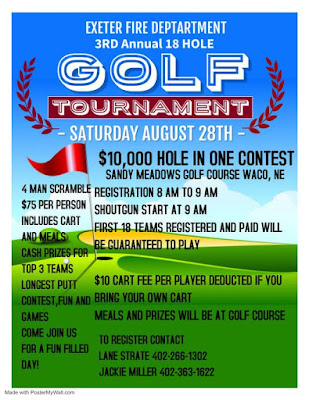