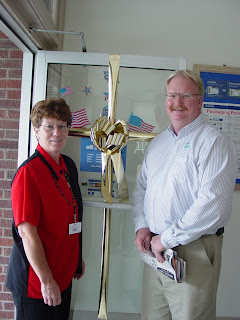 The Exeter Chamber of Commerce is offering the opportunity for you to get a little holiday decorating done. For $10 the Chamber will decorate the door of your choice with a Christmas ribbon and bow. There is a choice of red or gold ribbon. The proceeds go to the Exeter Foundation. Forms are available at the Exeter Library and City office, First National Bank in Exeter, Greg's and at the Exeter Post Office. Please place your order by November 19th.
Posted by Leesa Bartu at 11:20 AM No comments:

Terry Salyer honored to fly with the Veterans as an Escort

Terry Salyer, of Exeter, had several strong motives for volunteering as an escort for the fourth Heartland Honor Flight and this was his most important one, honoring the World War II veterans.

He emphasized that “The story is not about me. It is about the World War II veterans. I was just there to help them along.” Both Terry and his wife Elaine are veterans of the Vietnam War. The served at the same hospital in Qui Nhon where Terry was a medic and Elaine was an R.N. She served a one year tour and Terry was there from 1966 to 1969.

When a spot to ride with the veterans on the October 22nd flight to Washington, D.C. came up he jumped at the chance, “I know my Dad will never get to see it so I wanted to go for him and see it for him. I sent my Dad a letter about my trip and all of the pictures and he got very emotional about it. That made the whole experience worth it for me. It meant so much to him," Salyer reported.

For the rest of the story on Terry's trip see The Friend Sentinel
Posted by Leesa Bartu at 9:15 AM No comments: 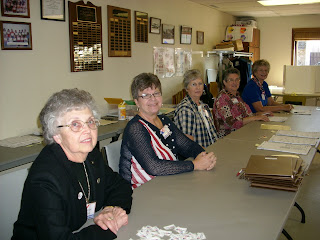 The Exeter Election Board spent 12 hours on Tuesday checking names, taking signatures, passing out ballots and collecting the completed ballots. The ladies who served are pictured from the left Bethine Leif, Sue DeJonge, Pat Koca, Elaine Krejci and Bonnie Cudaback.

For the full tally of Fillmore County Election results please visit election results
The results are now posted but you have to use Internet Explorer as your browser to see them. As far as Exeter goes, the unofficial results are:

The proposition to eliminate township board did NOT pass.
Posted by Leesa Bartu at 5:51 PM No comments: