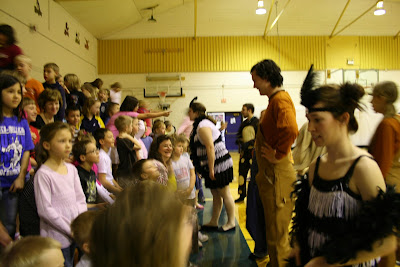 Theatre at eight-thirty in the morning may be a little early in the day for some, but the timing was perfect for the York College Traveling Children's Theatre.

The theatre group made a stop on their whirlwind 22 show run at Exeter-Milligan Elementary School last Thursday morning and brought laughter, applause and a whole lot of theatre to the students.

The show, In One Basket, was written by Shirley Pugh and weaves together twelve folk and fairytales from around the world. The general theme of the short scenes was to be happy with what you have right beside you.

The students roared with laughter when the rich man paid his noisy neighbors to move and they just moved into each others homes still leaving him with noisy neighbors. A husband and wife who misused three wishes ended with the statement "happiness comes when you don't have any wishes at all."

Throughout the twelve mini scenarios the theme continues with the mother of "Gustav" who always finds her son right no matter how many mistakes he makes. The "Tale of a Mouse" in which a mouse hunts high and low for a mate and then find him in the field outside her house embodies this theme in plain language but was funny enough to keep the students and adults engrossed.

The actors showed an amazing amount of variety in character, costume and scenery. There was plenty of action to keep even Kindergarteners still in their seats. At the end of the program the actors introduced themselves, including their year in college, their hometown and their major. While many are arts majors some major in very different fields. The actors mingled with the crowd again after the show and answered the elementary students questions. Before leaving, the group invited the students to a backstage tour and showed their costumes, props and sound effects items.

If you won't have the opportunity to see this entertaining performance at a local elementary school, the York College Traveling Children's Theatre will be performing their show for the general public on April 16th at 7:00 p.m. in Gurganus Hall on the York College campus. 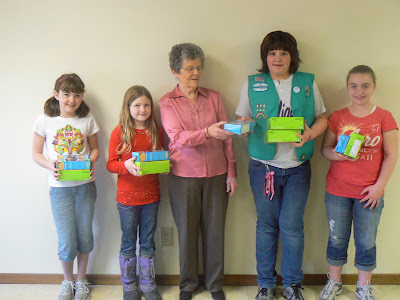 Exeter Troop 390 recently participated in the Gifts of Sharing project by donating cookies to the Backpack program that is sponsored by the United Methodist Church. Accepting the cookies for the program was LaVonne Guthrie who is pictured with some of the girl scouts. The are from the left Hannah Beethe, Janey Erdkamp, LaVonne Guthrie, Tara Mueller and Kaitlyn Vavra. As the Girl Scouts sold cookies, customers were given the option of purchasing cookies just for this project. The girls also donated cookies from the troop.
Posted by Leesa Bartu at 10:57 AM No comments: 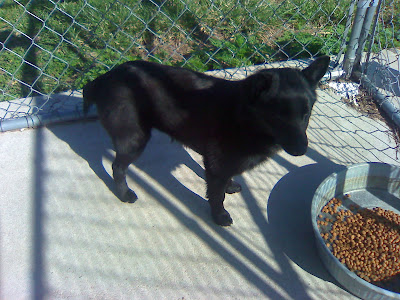 Did you lose your dog recently? This dog was found running around near Casey's on 04-04-10. If you know the dog leave a message on the Exeter PD phone (266-5331) and they'll get back to you. It's currently in Exeter's doggie jail but if no one claims it soon they'll have to take it to York. UPDATE: The dog was adopted in town.