Camille M. Kuska, 92, a resident of Bettendorf, Iowa died on Wednesday, July
15, 2009 at Genesis Medical Center, East Campus in Davenport, Iowa.
Her funeral services were held at 1:00 p.m. Saturday at the Asbury United
Methodist Church in Bettendorf. An additional funeral service was held in Exeter at the
Farmer Funeral Home on Monday, July 20, 2009 at 3:00 p.m. Following services in
Exeter, Camille was laid to rest in the Bohemian National Cemetery in Milligan.

Camille was born June 19, 1917 in Cody, Wyoming. Upon the death of her
mother in 1918, Camille was raised by her maternal grandmother, Lucy McDougal and
her aunt, Mary McDougal in Neligh, Nebraska. Camille attended the University of
Nebraska and taught school in Orchard, Nebraska in earlier years. On June 1, 1940, she
was united in marriage to Donald E. Kuska in Lincoln, Nebraska.

Camille was an active member of the Asbury United Methodist Church where she
was a member and past president of the United Methodist Women. She volunteered for
many activities at Asbury over the years and was always there to help when needed.

She & Don loved to travel and have visited all 50 states including two trips to
Alaska. They had also visited many provinces in Canada and visited Europe as well.
Camille was a devoted wife, mother, and homemaker who enjoyed taking good
care of her home. She loved to play bridge and was a member of several bridge clubs.
She was also a member of the “Red-Hatter’s” who met monthly. Camille loved her many
friends and greatly enjoyed attending the Quad-City Symphony Orchestra performances
in Augustana College.

Those left to honor her memory include her husband, Don; her daughter, Cindy
Buchman of Bettendorf, Iowa, her grandchildren Dominick Marcott, Danielle Potenzo-
Temple & her husband, Brian, Aaron Buchman & his wife, Heather and Jennifer
Buchman; her great-grandchildren, Avery Temple and Kira Marcott; and many other
relatives and wonderful friends.

Her daughter, Sherry Potenzo preceded her in death in 1989.
Memorials are directed to the family.
Posted by Leesa Bartu at 10:33 AM No comments: 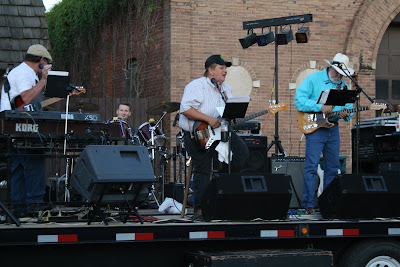 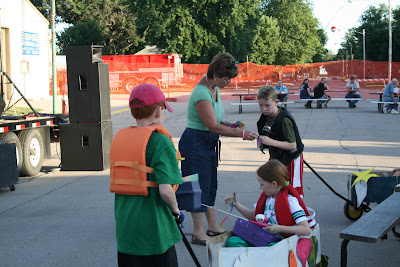 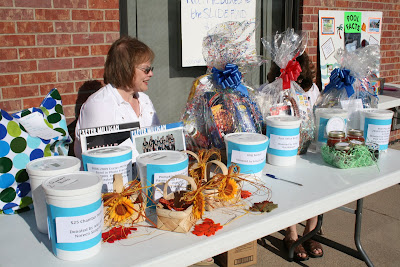 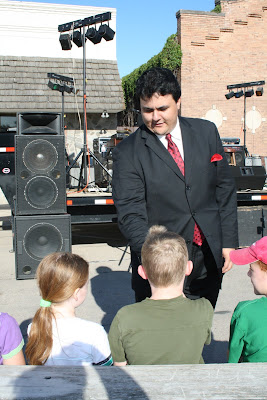 Magician Adam White entertained the kids and parents alike with his comedic magic show Saturday at the street dance.

Softball, snow cones, swimming and a street dance all added up to a great day in Exeter on Saturday.

The softball tournament started Saturday morning and continued through Sunday with teams from all over the area competing.

The Exeter Aquatic Center had snow cones at the pool on Saturday afternoon and the Exeter Chamber of Commerce passed out $2.00 gift certificates to be used at the pool to each child entering the first hour. Despite the cooler temperatures the snow cones were a hit.

Raffle tickets for donated baskets to benefit the slide fund were available at the pool in the afternoon and were also displayed at the street dance. The Exeter Chamber of Commerce sponsored the raffle. The baskets were raffled off at 8:15 p.m. Winners and donaters were:

The Village of Exeter donated a 2010 family pool pass to the new Aquatic Center and Paul and Becky Erdkamp donated a basket with pool items - Won by Hope Androyna.

Vickie Ozenbaugh donated a basket on behalf of the post office stuffed with stamps, envelopes and other goodies and LaVonne Guthrie's name was drawn.

Greg's Market donated a BBQ basket with frozen burgers, buns, chips and condiments and it was won by Annette Gloystein.

Alan and Noreen Songster donated two $25 chamber bucks certificates to be raffled off and Hope Androyna won as well as Kay Due.

Just before the baskets were raffled off the Exeter Chamber of Commerce sponsored a kiddie parade. There were twelve participants. From pedal tractors, to bikes and buggies the parade was adorable and everyone loved the Shetland pony who brought up the rear!

The fireman served a very nice supper of hot dogs, grilled chicken breasts, or beef sandwiches for the crowd. Then the band started playing. Midnight Magic had a great mix of oldies, country and rock to please everyone.
Posted by Leesa Bartu at 10:14 AM No comments:

Colby Chapman of Colorado Springs, CO passed away July 4th at the age of 38. He is the son of Gerald and Peg Chapman of Cayon City, CO. Burial was at Fort Morgan National Cemetary.
Posted by Leesa Bartu at 10:09 AM No comments: