He is survived by his wife Annabelle of Milligan, NE 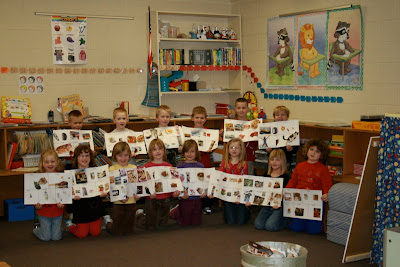 The Exeter-Milligan Kindergarten class has been busy learning about the five senses in science class. After studying each of the senses, the students looked through magazines and made a "Senses Collage". 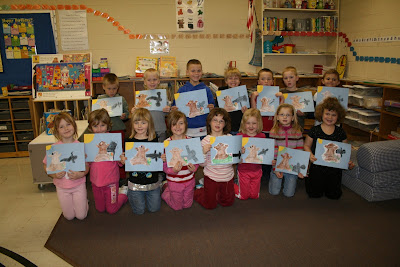 The Exeter-Milligan Kindergarten class learned about Groundhog Day on Tuesday, February 2nd and made a groundhog picture with the groundhog and his shadow. 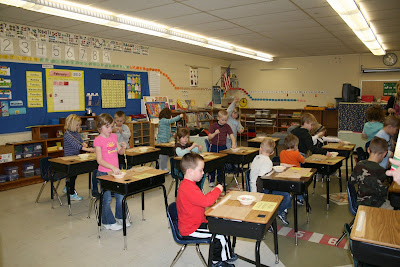 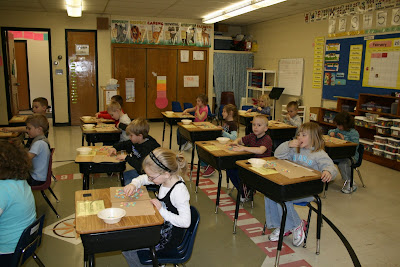 The Exeter-Milligan Kindergarten class celebrated the 100th day of school with special snacks, then they made an 100 piece cereal necklace and at the end of the school day were joined by the First and Second grade classes and jumped on filled balloons in the hallway.
Posted by Leesa Bartu at 10:24 AM No comments:

Mr. Lewandowski's American Government class at
Exeter-Milligan recently finished a Unit on the Executive
Branch and Elections by holding Mock Presidential Elections.
Throughout this unit students studied the roles of the
Executive Branch, Political Parties, and the Electoral
Process. During typical election years, students would
choose actually candidates but due to the off year, students
developed their own candidates. Students designed a
campaign motto, poster indicating their platform, and a
campaign commercial in attempt to gain support from the
student body. Students utilized the school's new MacBook
Pro laptops and software programs Pages and iMovie to
complete the project.

The project went through both the Primary and General
Elections with the selection of a running mate. In the end,
Chuck Norris and Bo Pelini group from the Republican party
were victorious in the battle for President and
Vice-President winning both the popular vote and electoral
college vote. Members of the winning group were: Jameson
Trauger, Landon Rhodes, Spencer Bures, Andrew Colson, Tanner
Odvody, and Tyler Rainey. Michael Jordan and Will
Ferrell(Independent) group finished second, and the Zach
Galifianakis and John C. Reilly(Democrat) group finished
third.
Posted by Leesa Bartu at 10:23 AM No comments:

Private family burial will be held at a later date
Officiating Rev. Jeff Adams
Posted by Leesa Bartu at 2:29 PM No comments:

Posted by Leesa Bartu at 2:09 PM No comments: 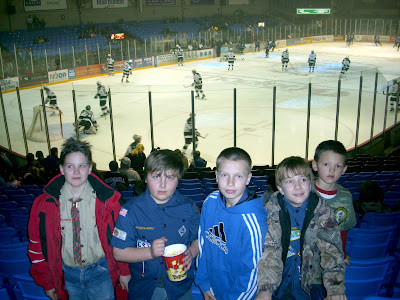 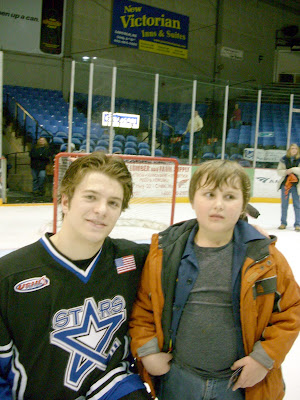 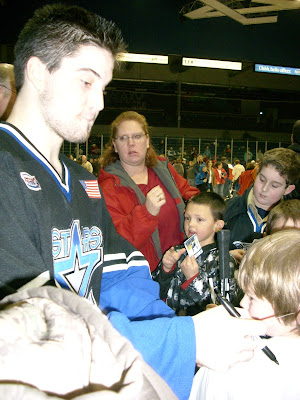 Tiger Cub Jackson Beethe, waits in line with his mom, Jane Beethe, to
have a Lincoln Star sign his trading card.

Exeter Cub Scout Pack 218 enjoyed a visit to the Lincoln Stars Hockey game with their families. The pack met at the Stars Ice Box and watched the two teams warm up and then saluted for the flag ceremony.

The Stars played a great game, with one puck flying over the glass. Webelos Scout Travis Gilliam got the puck and the score was tied at the end of the regulation time. It remained tied after one session of overtime so it was off to a shoot out. Unfortunately, the Cedar Rapids Roughriders scored two goals during the shoot out and the Stars couldn't get it in the goal.

After the game was over, all of the scouts in uniform were invited on the ice to get autographs and pictures with the Stars players. The players were very accommodating and friendly with the Scouts.
Posted by Leesa Bartu at 11:36 AM No comments: