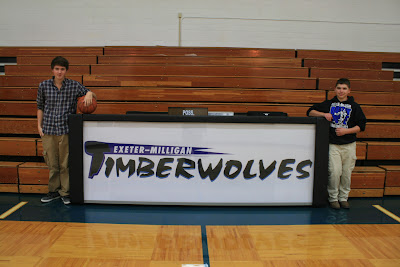 Ochsenfeld, who lives with his mom in Luenen, Germany, population 90,000, found out where he was headed and went online to Google maps to check what he was getting into. “I was just hoping for everything new, I knew it could be everything from a big to a small town.”

In Germany, Ochsenfeld has around 140 in his class, so coming to a school the size of Exeter-Milligan was a bit of a shock. Another adjustment for Ochsenfeld was the importance placed on sports in the States. “If I wanted to do sports in Germany we don’t have school sports. You have to go to a club team.” He played club soccer and club golf at home and is looking forward to playing on the Exeter-Milligan golf team.
From his perspective this is a great option for students, “It’s good, you’re always busy, never time to be bored.”

After arriving on August 4th Ochsenfeld got active right away, serving as the student manager for the Exeter-Milligan football team. Living with the family of Superintendent Paul Sheffield has been a wonderful experience for him. He has enjoyed the contrast to his home life in Germany. He doesn’t have any siblings so he has enjoyed having three new siblings. “It’s cool when you are at home there’s another kid or two - shooting hoops or whatever, but we have to discuss what we watch on tv.”

As far as the food goes, he notes that they have fast food where he lives in Germany but the biggest difference is that he eats lunch at home, where his mom prepares their main meal at 2 pm when he gets home from school and then they eat a very light, usually cold evening meal.

Ochsenfeld also finds the culture very different as he lives in a large city and the Exeter-Milligan community is primarily agriculture and rural. He also finds the mentality in Nebraska to be a stark contrast to his homeland. “Everyone is more open and friendly to people you don’t know here. You don’t do that in Germany.”

While in the States Ochsenfeld is working on obtaining his driver’s license, taking driver’s ed this Spring hoping to return to Germany and transfer his license. Not only is the driving age 18 in Germany but the coursework to get the license is close to $2500. However, driving is not as important in Germany, as the train system is extensive and is a practical means of transportation.

If Ochsenfeld isn’t riding the train to visit his friends, he will ride his bike ten or fifteen minutes to get to the mall to hang out with them. Just how big Nebraska is has been one of the biggest adjustments for Ochsenfeld, “Driving everywhere, to go to the mall you have to drive for an hour. Everything is so far away and so big.”
Over the Christmas vacation the Sheffields and Ochsenfeld drove to Phoenix for the holidays. Felix enjoyed the trip immensely especially the day trip they made to the Grand Canyon. He had seen it in pictures but the experience of being there was “amazing.”

The extremes of weather have also been am adjustment for Felix. The summertime temps in Germany hover around 70 to 80 degrees versus Nebraska’s 90’s and 100’s. He was looking forward to lots of snow because in the wintertime in Germany “three inches is a lot of snow, parents let their kids stay home from school.”

So far Felix has really enjoyed his year here, the only drawback he can see so far is that he will have to redo the school year, “Who cares about one year, it’s worth it. I would do a class twice again for this. . .plus I’ll dominate in English and maybe geography.”

The Sheffield family has thoroughly enjoyed the experience so far as well, “It’s great to have another brother at home,” according to tenth grader Devin Sheffield. Paul Sheffield concurred, “It’s been great so far. Felix has fit so well with the family. It has been a scary good experience. I wouldn’t mind doing it again but we’ve been so spoiled with this experience.”

Ochsenfeld will be staying until June when his Mom comes to visit. He is excited to share the community of Exeter with her. “I want to show her all the country life and the people. I want the families here to meet her and I want to take her to a farm.”

Until that time Ochsenfeld is looking forward to finishing the basketball season, playing plenty of golf and lots more driving here in Nebraska.

Exeter Sees Over a Foot of Snow

After a foot of heavy wet snow in the Exeter area starting Friday evening, trees and bushes were weighted down to their maximum with many breaking under the weight.  The only thing that could have made the Exeter-Milligan students happier about the snow would be a snow day.  Despite having to go to school, the Exeter-Milligan elementary students had a blast playing on the piles of snow cleared from their playground. 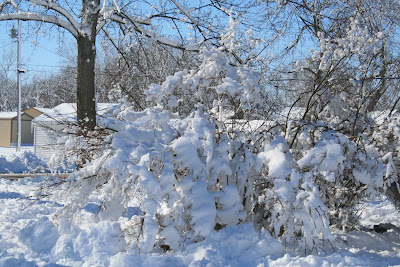 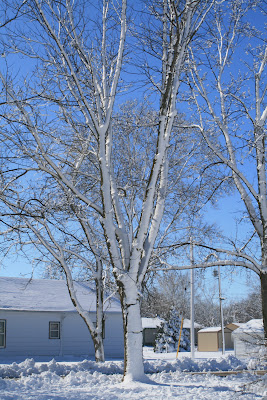 Snow clung to the trees for days after the Friday night storm. 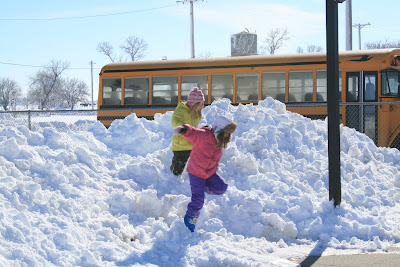 The girls enjoyed playing on the snow pile at Exeter, too. 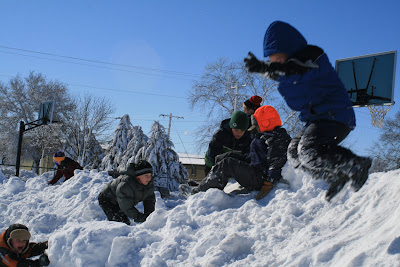 Almost all of the elementary kids were on the snow piles during the lunchtime recess. An unidentifiable Exeter-Milligan student yells "cannonball" has he jumps off the pile of snow.
Posted by Leesa Bartu at 11:03 AM No comments:

The Exeter Chamber of Commerce will host their FREE Community Pancake Feed tonight, Monday, Feb 6, from 5 - 7 pm.  Come enjoy the fun and food!
Posted by Leesa Bartu at 10:00 AM No comments: