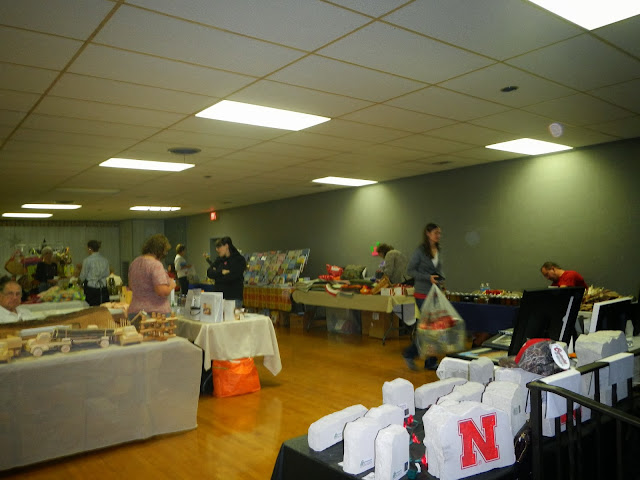 Over 200 shoppers headed in an out of the Exeter American Legion home on Saturday to peruse the many booths of handmade items and vendors that lined the inside of the building.  The Annual Exeter Avenue Holiday Sampler is organized every year by the Exeter American Legion Auxiliary.  The Auxiliary also sponsors a café and this year’s menu included Prime Rib sandwiches and homemade Kolaches.  One of the most popular stops besides the café is at the homemade pie booth by the Exeter G.F.W.C. Woman’s Club.  Pictured below are woman’s club members left to right Patty DeMoss, Elaine Oldehoeft, Karen Chapman and Agnes Loukota. 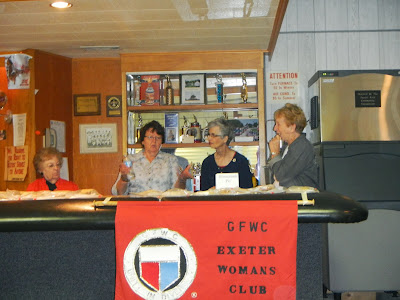 Exeter-Milligan took on the Friend Bulldogs in Friend on Friday night and showed them back to the doghouse.  The Timberwolves shut out the Bulldgos 58-0 during the lopsided matchup.  The undefeated Timberwolves have one more regular season game at Pawnee City next Friday night.
Posted by Leesa Bartu at 9:09 PM No comments:


The GFWC District IV Woman's Club Convention was held at the United Church of Christ Church in Exeter NE on October 3, 2013.

District President Nancy Galaway of Fairmont called the meeting to order.  Judy Dinneen of the Exeter club gave the "Thought for the Day" telling about the District meeting being held in the Geneva High School with 231 women present, representing 53 clubs.  Exeter President Elaine Oldehoeft welcomed the group to Exeter and Alan Michl, Mayor of Exeter, also welcomed the women, and told them of the many features of our town.

Bonnie Cudaback, Secretary, read the minutes of the prior convention, gave the presentation of the program and had each clubs' members stand for roll call. There were 37 women present, representing 7 clubs in the district.

ESO State Chairman, Donna Lefler of Fairmont, presented Patty DeMoss of the Exeter club a certificate and pin, as she has reached the Member Level, having read 16 books in the various categories.

Donna Lefler gave the GFWC/NFWC District IV slate of officers for 2014-2016.  Bonnie Cudaback of Exeter will be the new Treasurer.

Gerry Merck, Outpatient Therapist from the Fillmore County Hospital Senior Behavioral Health Clinic, presented the program centered on "Anxiety and Stress".  She also led the group in exercises that can control stress.

The Seward Woman's Club extended an invitation for the 2014 District Convention.

The fundraising auction was held with Exeter's Linda Underwood doing the honors.  It was very entertaining!

Ten members of the Exeter Woman's Club helped with the noon lunch and attended the days' activities.
Posted by Leesa Bartu at 7:30 AM No comments: 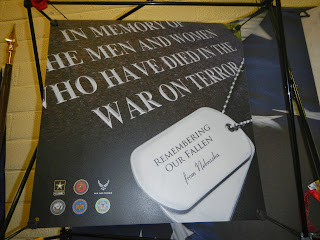 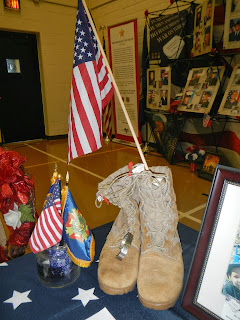 The Remembering the Fallen from Nebraska memorial stopped in Exeter last week from September 30 – October 4th.  History teachers in the Exeter-Milligan district took the opportunity to share this piece of American history with their students.  Generations Bank sponsored the exhibit. The mission of the project is to honor those who made the ultimate sacrifice in the Iraq and Afghanistan wars.  Its legacy is that these men and women will never be forgotten and that their names will be remembered and spoken.
Posted by Leesa Bartu at 7:30 AM No comments: 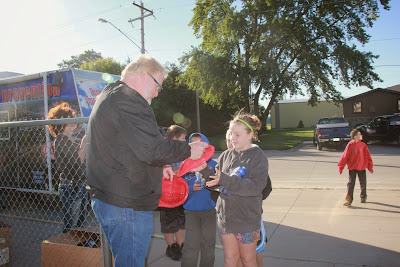 Exeter Volunteer Fire Department Member Ed Mark passes out Fire Hats to all of the Exeter-Milligan Kindergarten through Sixth Graders.  Emma Olsen is getting her hat. 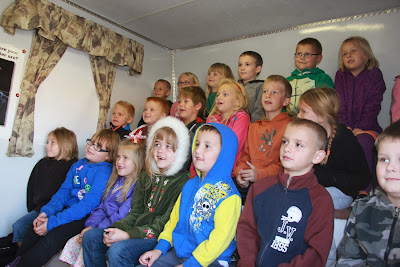 The Exeter Volunteer Fire Department sponsored a Fire Prevention Awareness event at the Exeter-Milligan school in Exeter on Wednesday, October 9.  State Fire Deputy Marshall Ray Nance brought his Fire Safety Education trailer and all of the kindergarten through sixth grade students had the opportunity to learn about fire prevention.

Nance travels throughout the state with the trailer doing programs on fire prevention and safety, “The key thing we want to get out to the kids is prevention.”

During the morning sessions, the students got to see a presentation from Nance in the trailer and then they were treated to rides on the Exeter Fire Department equipment along with a tour of the rescue unit.  The fire department also passed out hats, refillable water bottles and snacks.

Nance used some of the audience members to help him demonstrate kitchen safety, putting out a pot that is on fire and also the proper use of some kitchen appliances.  The students got to watch as one volunteer made a fire emergency call to 911 with a dispatcher on the other end of the line.  It was a good lesson for the students to know the correct information they need to share with an emergency dispatcher.

The students also had the opportunity to escape from the trailer after it was filled with fake smoke.  This stimulation helped the students understand how difficult it is to escape from a home that is during a fire emergency.  During each session a student was purposely left behind and Exeter’s assistant fire chief Jacob Miller suited up and “rescued” the student out of the smoke filled trailer.

“The biggest message I want to give to parents is to practice at home.  Just because your kids do a fire drill at school doesn’t mean you don’t need to do one at home.  You have to make sure that all of your rooms have working windows that operate.  There are many older homes and windows can be painted shut.  You have to make sure that kids can open them to get access outside,” explained Nance.

Nance also uses Deputy Dan, his ventriloquist dummy, to share fire safety tips with the students before performing his favorite fire prevention rap.  Nance shares about some of the fire dangers that are found in the home like candles, space heaters and extension cords.

Sam's Club in Lincoln sponsored the snacks for the event.
Posted by Leesa Bartu at 7:30 AM No comments: 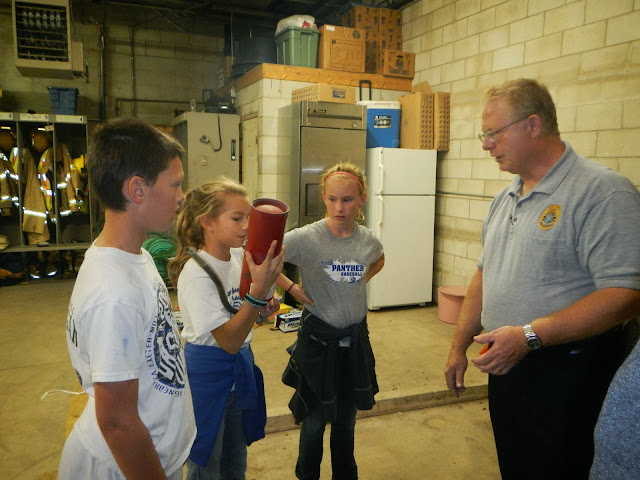 One of the key tools that the Exeter Volunteer Fire Department uses to fight arson among young people is the Junior Fire Patrol program.  Four nights during the month of October the fifth grade students at Exeter-Milligan school are invited to learn all about fire prevention and fire fighting tools at the Exeter Fire Department.  During their meeting on Tuesday, October 8th the participants got a lesson on fire extinguishers from Nebraska State Deputy Fire Marshall Ray Nance.  They learned how the chemicals work to put out a fire, and how to properly employ them in dousing a fire.  Pictured are Deputy Fire Marshall Ray Nance, jr fire patrol candidates Jackson Beethe, Jaiden Papik (middle) and Georgia Meyer.
Posted by Leesa Bartu at 7:30 AM No comments: