Jordyn Brandt, a Senior at Exeter-Milligan, has been selected to participate in Nebraska Wesleyan University's Bridge Art Exhibition.  The juried exhibit is held annually to showcase the talents of High School Seniors.  Students may submit five pieces of art for consideration.  Brandt's acrylic painting of her cat titled, "Naptime", was selected for display.  The exhibit will run from December 2-7 at the Elder Gallery, in the Rogers Center for Fine Art, on the Nebraska Wesleyan campus.  Hours are Tuesday – Friday 10:00 to 4:00 and Saturday – Sunday 1:00 to 4:00.  On  December 7, a brunch and awards ceremony will be held for the participants 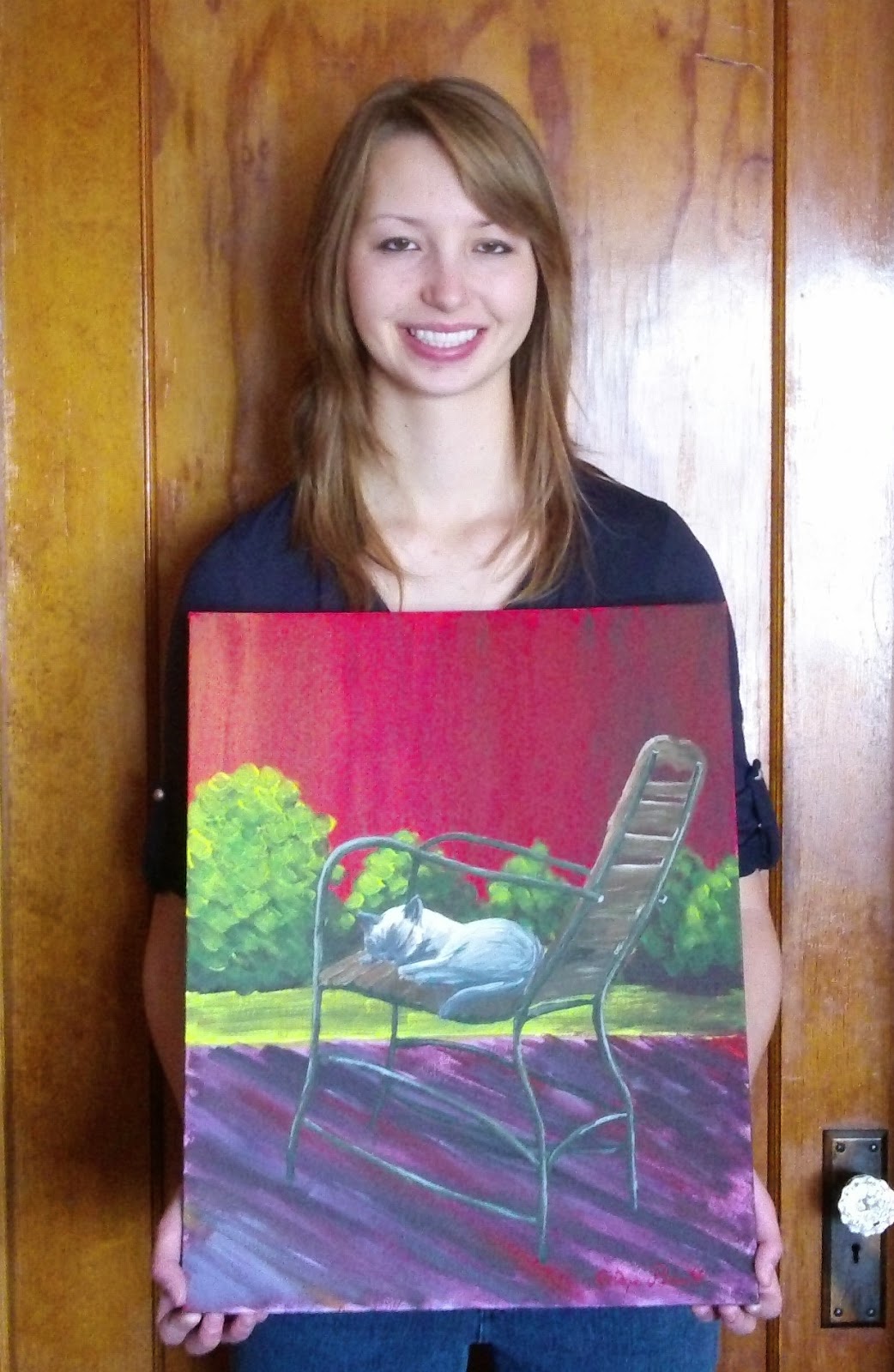 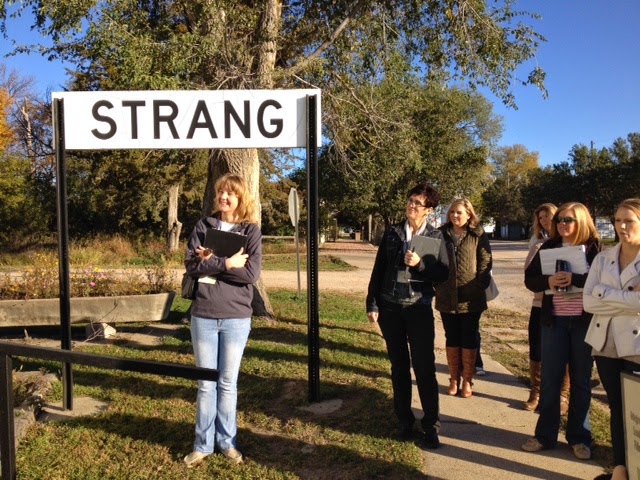 FILLMORE COUNTY - The “Odegeo. . .Leadership for Fillmore County” class visited museums and historical sites for their October History and Tourism session on October 21th.
The class began their day at the Rialto ll Theatre where Brandy VanDeWalle talked to the group about the Three Kinds of Leadership Styles and using the styles that fits the group you are working.
Pat Mau told the group how the theater is run by volunteers with just one paid part-time staff.  The group then learned about the historic theater building and was able to hear about and see the new digital program used for showing movies and the new seats that have been installed.
The next stop was the Strang Museum.  Janet Lentfer told some interesting stories of the items housed in the Museum. The group went to Bubba’s Café and enjoyed break provided by Waddell & Reed Investments.
The group traveled to the Maple Grove Barn near Tobias where Bob and LaDean Endorf took the group on a tour of the historic Maple Grove Sales Pavilion and Farrowing Barn that was built in 1912.
The next stop was the three World War ll Memorials north of Milligan. Shirley Brunkow met the group and told interesting stories of finding information on the soldiers that were killed in the crashes while training at Fairmont Army Airfield during  World War ll.
Melvin and Arlene Vavra, Janet Fong and Mark Vavra were our guides at the Ceski Bratri Cemetery and Pioneer Chapel west of Milligan.  They explained the history of the chapel and cemetery to the early pioneers and the people of the area.  Several of the class members witched for graves.
The next stop was lunch in Geneva at the VFW. The lunch was provided by “Walter Insurance and Real Estate”.
The group traveled  to the Historical Maker on Hwy 6 where Doug Rung talked about the World War ll soldiers getting off the train and being trucked to the Fairmont Airbase. He also stated this entrance is the road to take to enter the front gate to the Airbase. Most people think the entrance off Highway 81 is the main entrance, but that is actually the back entrance. The group then proceeded to the Airbase where Doug talked about where the buildings were located during the training for the young pilots and told stories from the time that the base was active.
The group traveled to the Fillmore County Museum were Linda Bristol, Doug Rung and Shirley Trauger gave the members a tour of the two facilities. The Fairmont Creamery Building/Ashby Building and the McClellam Drug Store.
The last stop of the day was at Meriwether Park at the home of Bob and Joan Ackland. Bob Ackland gave the members history of Meriwether and Lewis and the naming of the park. .The members also enjoyed break sponsored by the ‘Geneva Casey’s”.
Persons interested in learning more about the Odegeo. . . Leadership for Fillmore County should contact the Fillmore County Development Corporation at 759-4910 or email lentfer.fcdc@genevamail.com 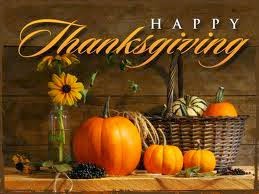 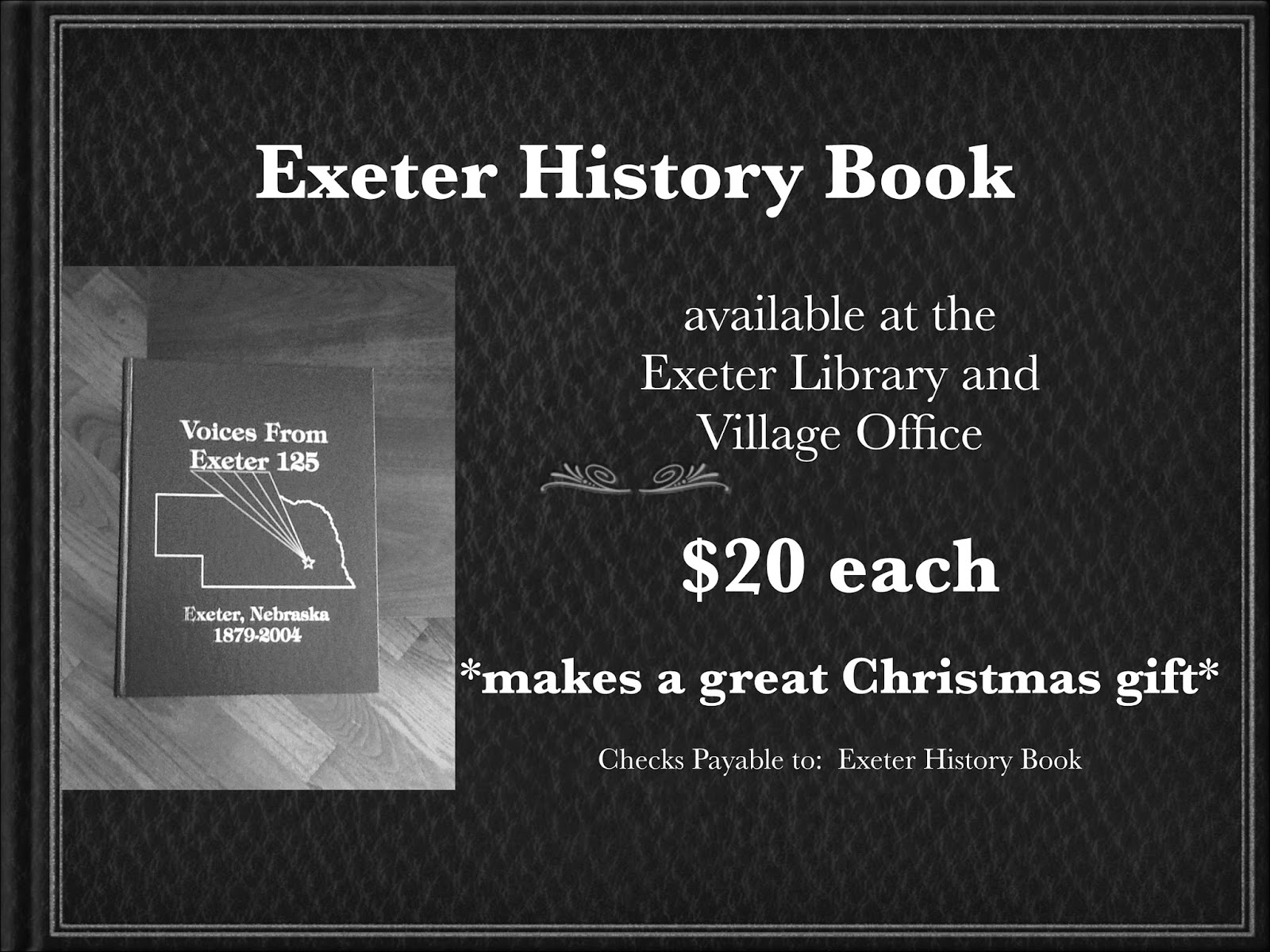 For the 10/11 news story on the Maxson brothers playing football click here
Posted by Leesa Bartu at 2:42 PM No comments: 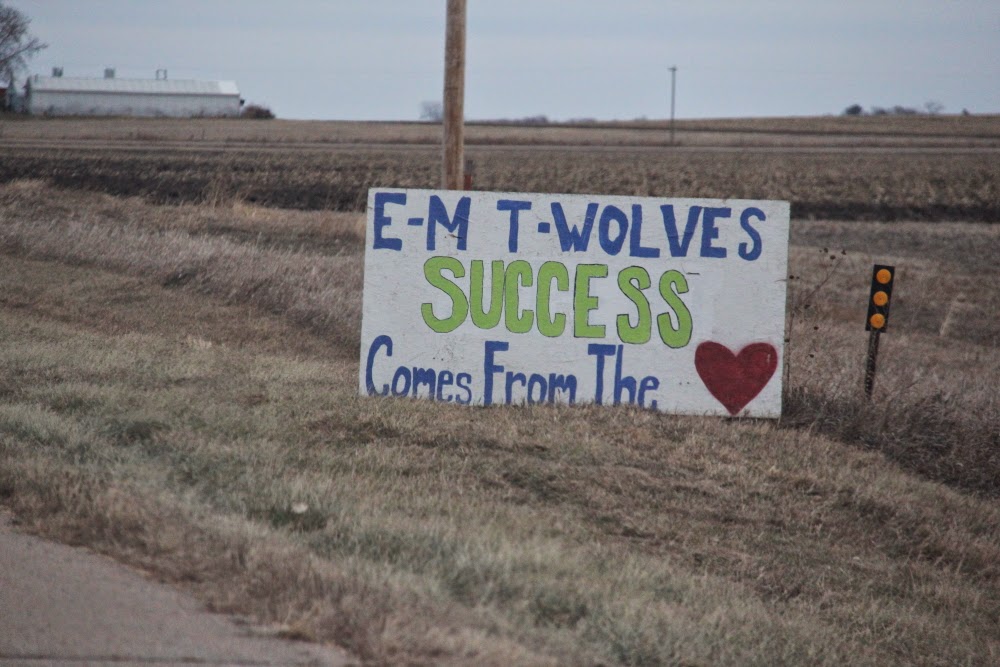 There were plenty of naysayers this year about a repeat appearance at the state title game for the Timberwolves, even among Timberwolf fans. At their first game against Kennesaw (then ranked #5) some fans were unsure as to where this season would lead.  Apparently they neglected the heart factor, because that is what it takes to make it to the state finals and this team has it.  They've had it for a long time but it's been fine-tuned and focused for the last three years.

They've poured their heart and soul into making their team a team and it shows in the Wcolumn.  The last four games of this season the team was behind at one point or even most of the game.  They didn't start panicking and make mistakes, instead they listened.  Their coaches coached and they listened.  And then, they made the changes and made the plays and it happened, they won.

They didn't just listen at games either, in practice they tweaked plays to make them work, listening to their coaches at every step.  This team, despite the fact that they lost a great group of seniors last year, kept their focus and made another appearance their goal.  One Team, One Mission.

One game at a time, they put the naysayers to rest and today, they killed them.  Mission Accomplished. Thank you to our coaches and our boys. . .STATE CHAMPIONS AGAIN!!!! 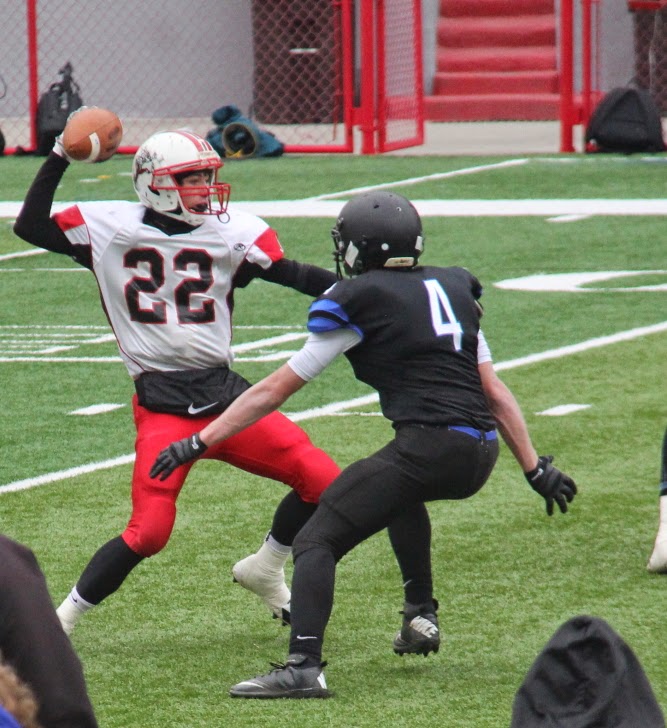 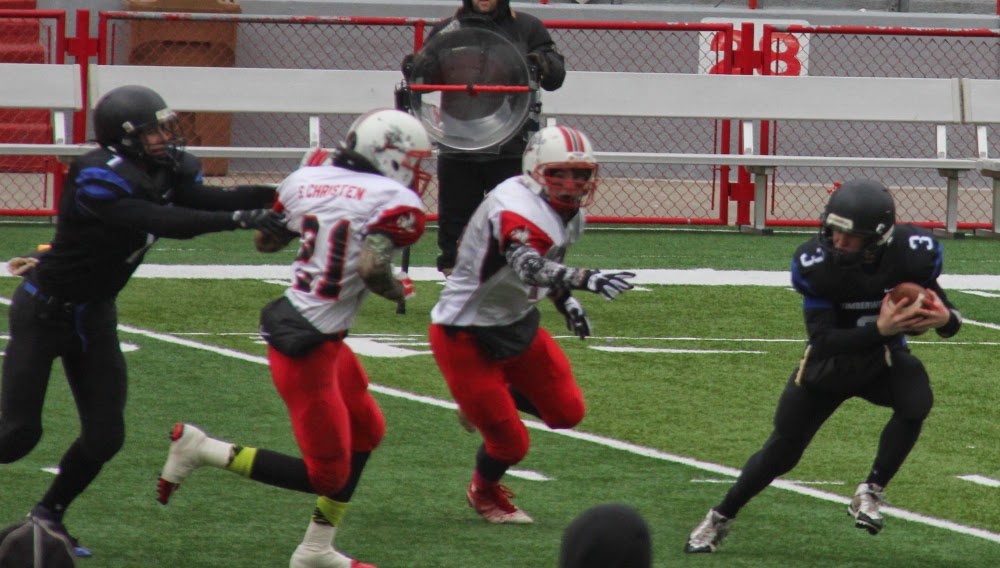 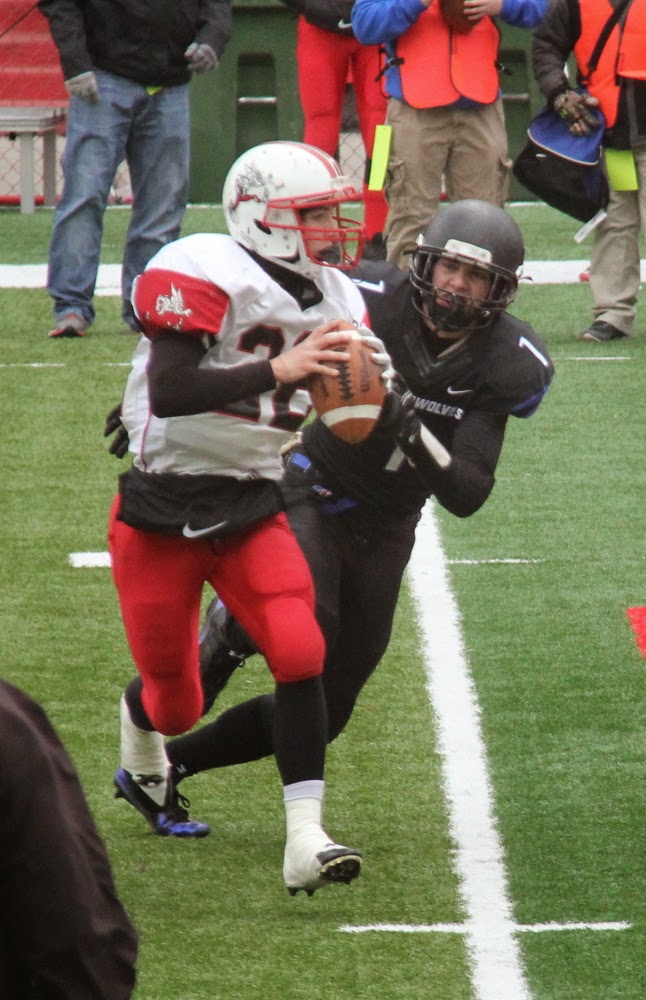 Axline takes another A-M player down. 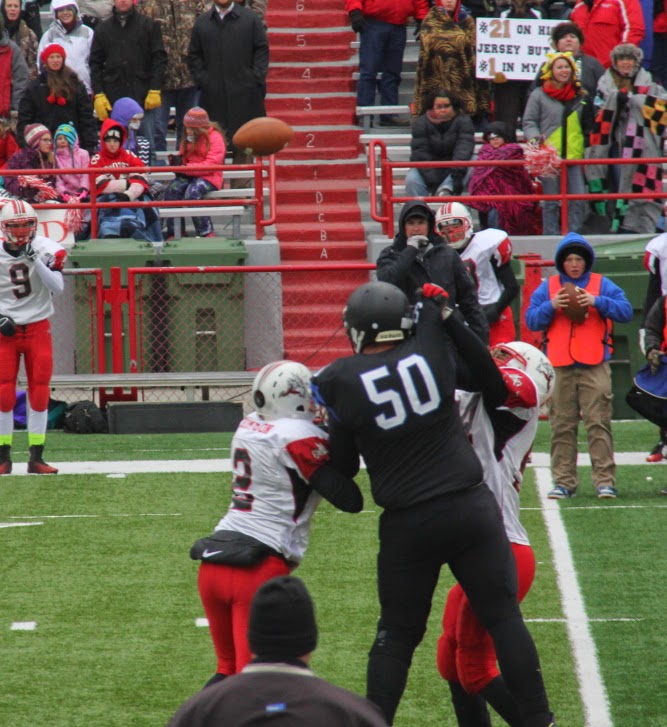 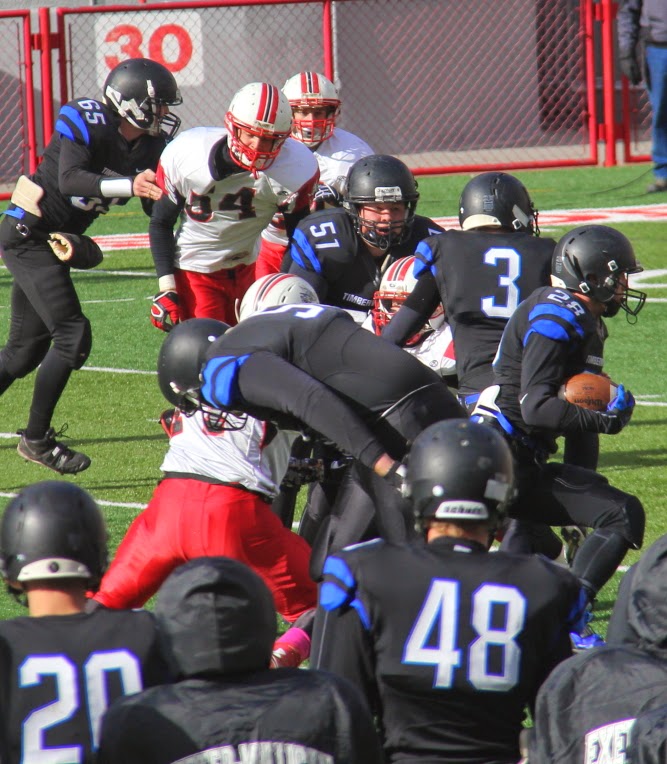 Kyle Jensen #28 finds the hole that the Timberwolf line makes for him.  Below, Kyle Jensen heads into the end zone for another Timberwolf touchdown. 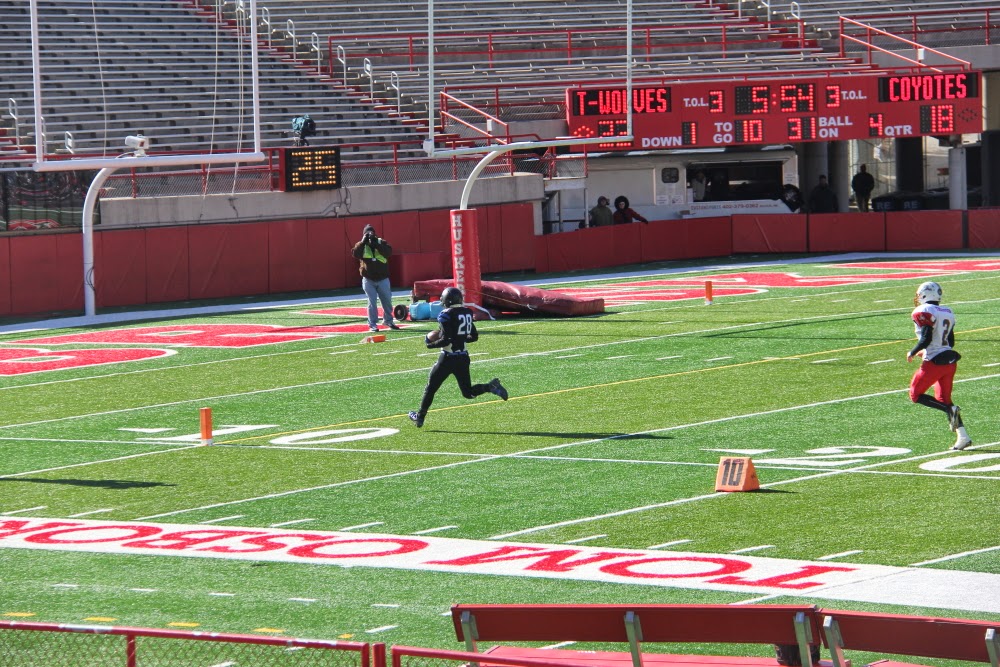 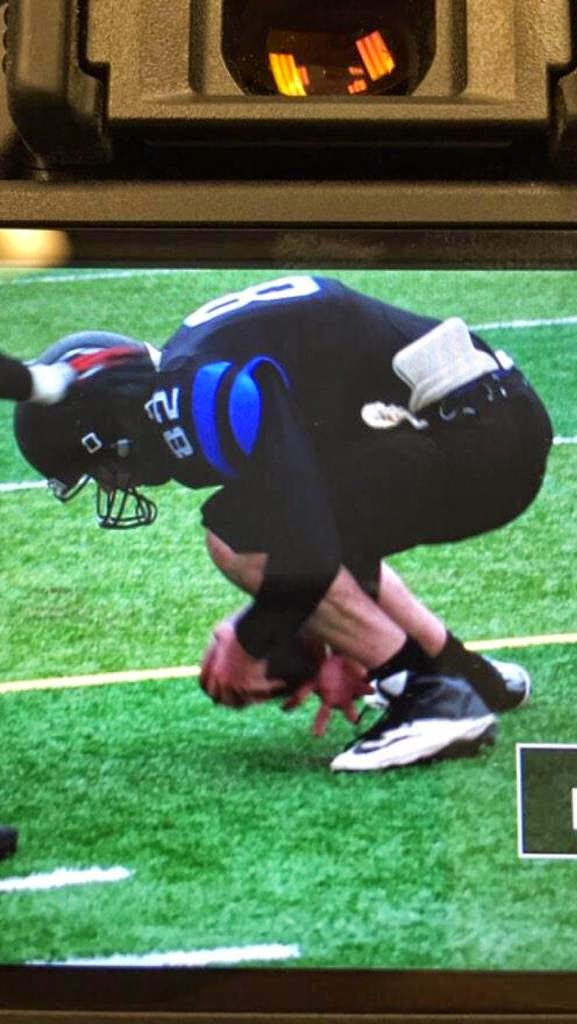 Here's a photo for those who questioned Derek Luzum's touchdown catch - those fingers are under that ball. (courtesy photo) 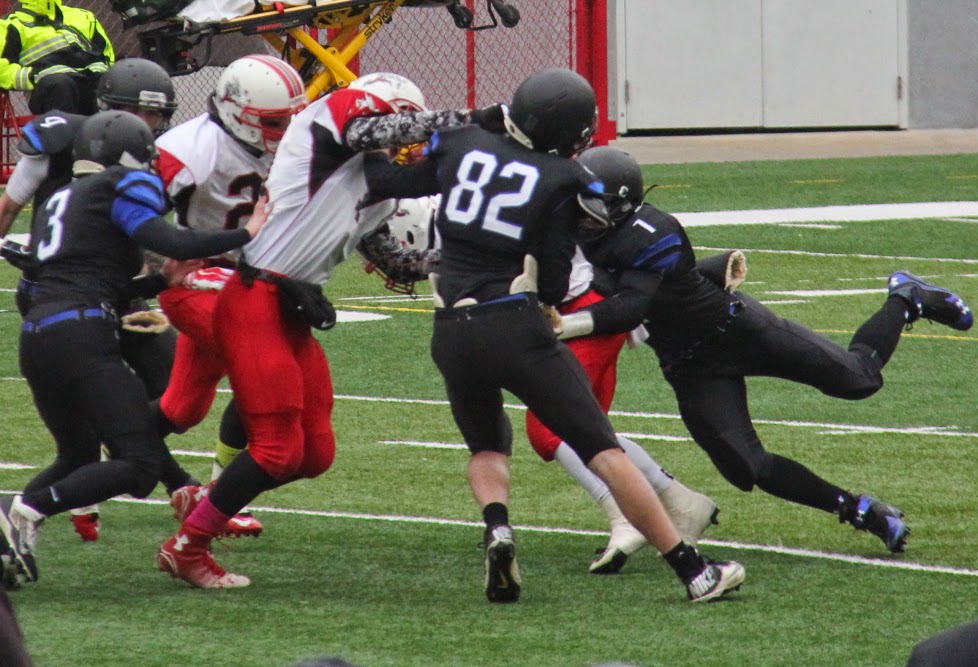 #82 Derek Luzum and Axline do their part in shutting down A-M. 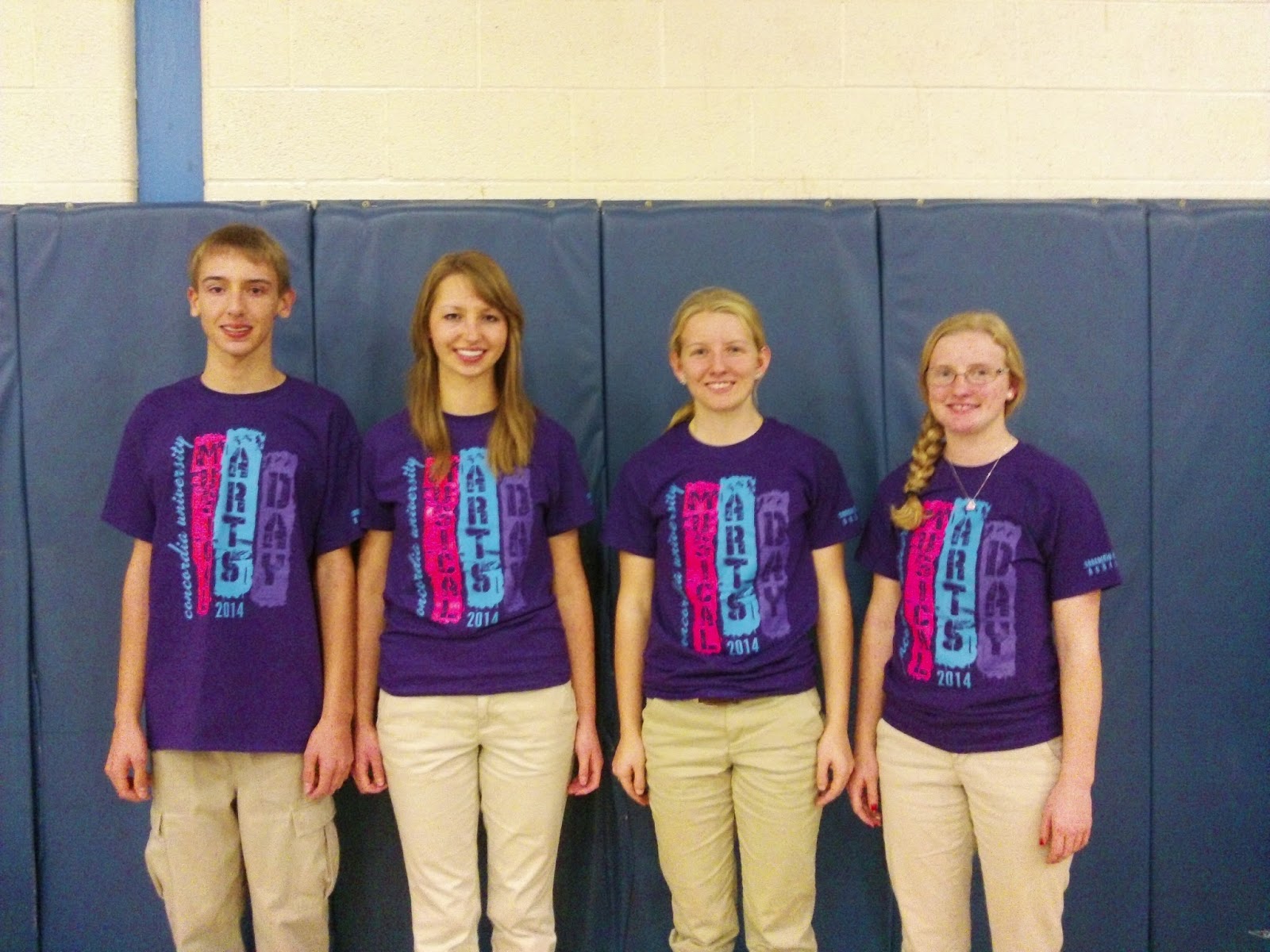 The Exeter-Milligan Timberwolves will be playing in the D-2 Football Finals Monday morning at 10:15.  The game will be broadcast on KTMX 104.9 radio and also online at their website.  The game can also be seen on NETV Channel 12 and 29. Go Timberwolves!
Posted by Leesa Bartu at 8:38 PM No comments: 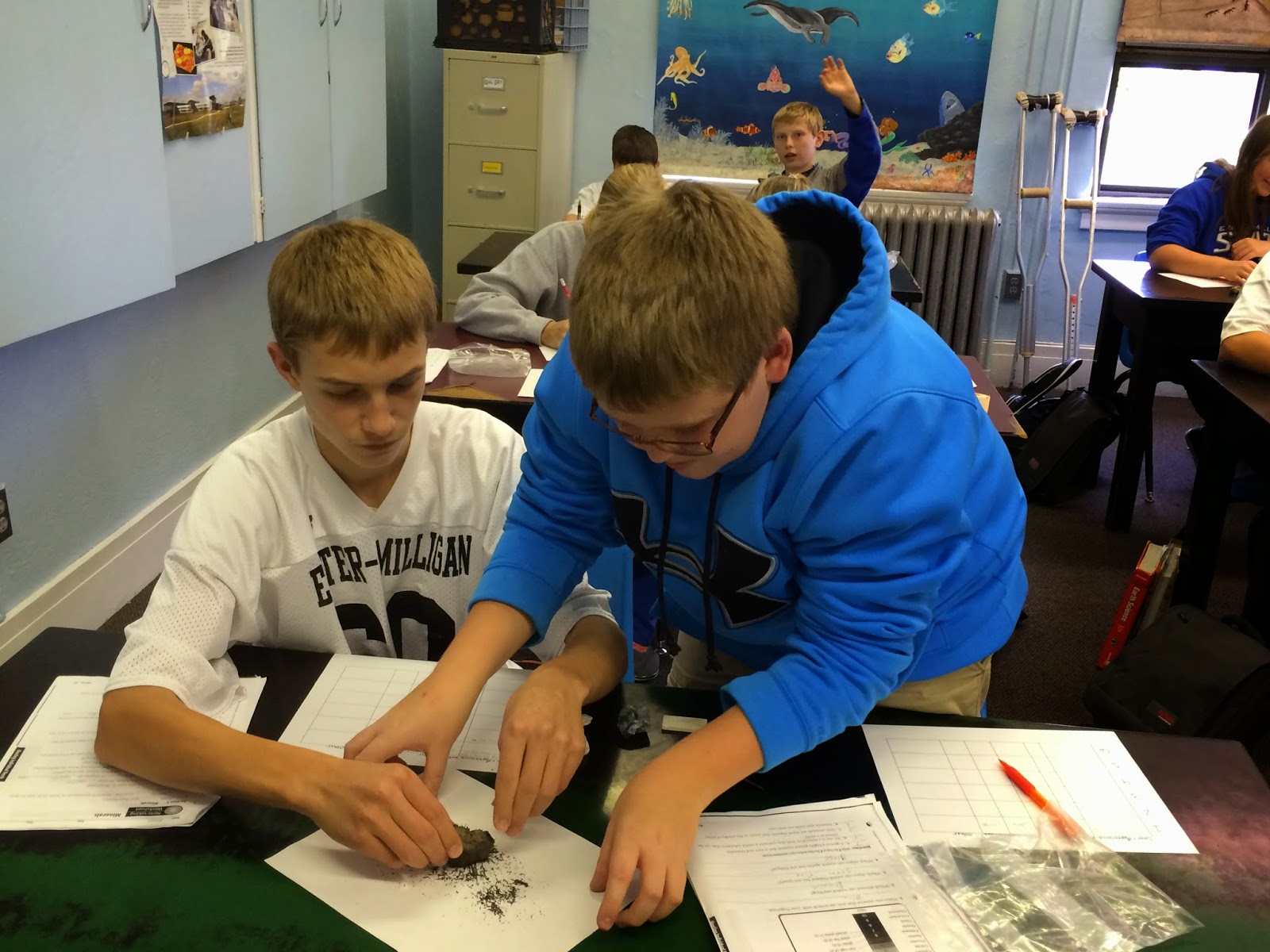 This week in 8th Grade Earth Science, Students were given a very important task. They were given a bag of minerals and asked to identify them. The task of identifying mineral is a very tedious process. The students had to use patience and teamwork to accomplish their goal. They also had to use their knowledge of mineral properties to solve the puzzle. Their skills were put to the test as they measured the hardness of their unknown minerals. They were also challenged to identify several other properties such as: streak, luster, fracture, and cleavage. The students were able to use print and internet resources to analyze their data and come up with their final answers.


above - Mitchell Manning and Theron Odvody

below - Kate Jansky and Joel Klemm 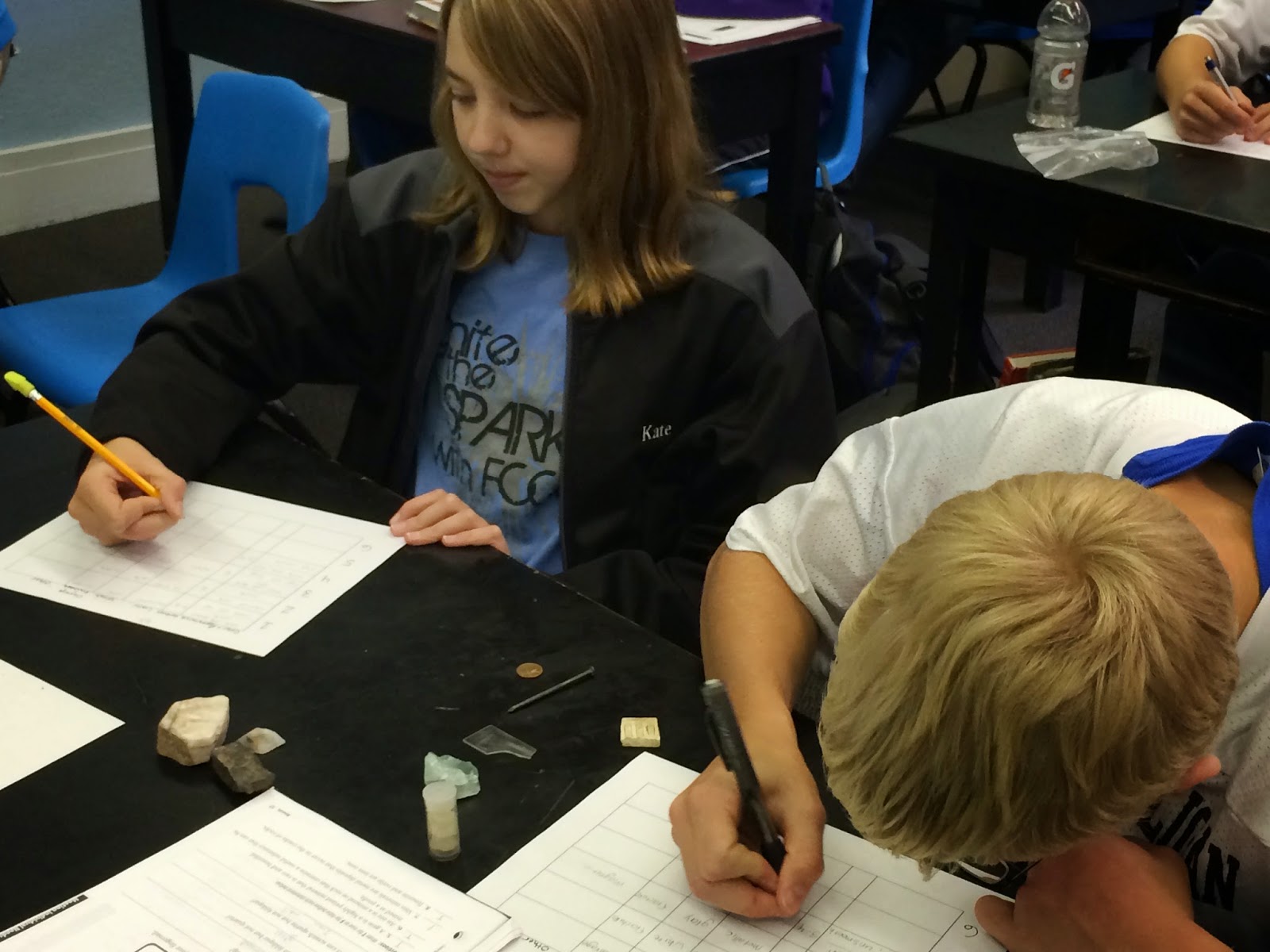