ATTEND A FREE PRESENTATION in MILLIGAN, NE March 14, 2012
"Helping to GROW Entrepreneurship Statewide: The Story of GROW Nebraska"
The public is invited to attend an afternoon presentation about GROW Nebraska™ by Erin Malzer on March 14th in Milligan. She will explain how small businesses can receive coaching, product consultation and market access for Nebraska products. GROW Nebraska™ is an Entrepreneurial Service Organization, which is membership-based and driven. GROW Nebraska’s™ goal is to connect entrepreneurs and small businesses to the world marketplace. The event will take place at 1:00 p.m. at Evening With Friends Restaurant located at 524 Main Street in Milligan, NE.
The Fillmore County Development Corporation is hosting the program. This program is in conjunction with the Southeast Nebraska Resource Network (SERN). SERN is a group of development resource and service providers interested in the betterment of Southeast Nebraska. The SERN business meeting will take place from 10:00 a.m. – Noon prior to the event.
SERN includes the following Nebraska Counties and their municipalities: Butler, Cass, Fillmore, Gage, Jefferson, Johnson, Lancaster, Nemaha, Otoe, Pawnee, Polk, Richardson, Saline, Saunders, Seward, Thayer, and York.
For more information contact Patt Lentfer at 402-759-4910 or lentfer.fcdc@genevamail.com
Posted by Leesa Bartu at 8:35 AM 2 comments: 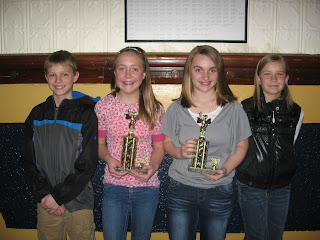 Eight Exeter-Milligan students participated in the Fillmore County Spelling Bee this year.  The Junior High students below are from the left, Janey Due, Elliot Erdkamp, Samantha Horne and Ashley Benorden who placed third.  Fifth and sixth grade participants are pictured from the left Mitchell Manning, Clarissa Mounce, who placed second, Kaitlyn Vavra, who placed third and Josie Kresak. 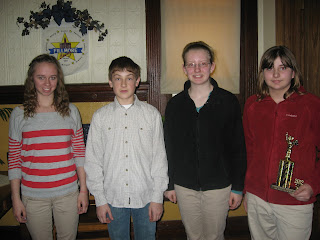 Posted by Leesa Bartu at 8:13 AM No comments: 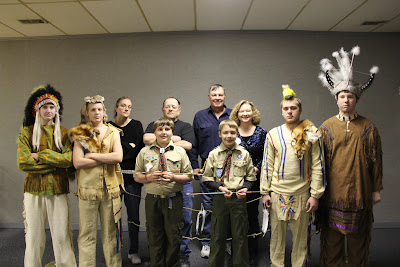 Webelos II Scouts in Pack 218 are pictured with their parents and the members of the Order of the Arrow who conducted their crossover ceremony.  They are from the left Jacob Noel (Akela), Micah Gill (Nutiket), Katie Babula, John Babula, Johnny Babula, Roger Brandt, Peytan Brandt, Dianne Brandt, Brandon Dyer (Medicine Man) and Brandon Yoder (Guide).
On Sunday, February 19th, Exeter Pack 218 held the crossover ceremony for the  two members of their Webelos II den.
Peytan Brandt and Johnny Babula both achieved the highest rank in Cub Scouts, the Arrow of Light.
To obtain the arrow of light the scouts must earn activity pins in physical skills, mental skills, technology and outdoor skills.  The scouts must also know the Boy Scout Law and Oath and participate in two Boy Scout activites.
After Cubmaster Leesa Bartu spoke on the meaning of the arrow of light members of the Cornhusker Council Prairie Winds District Order of the Arrow assisted the boys in crossing over to Boy Scouts.
Participants in the crossover ceremony were the Nutiket, the Guard, (Micah Gill) Kichkinet, the Guide (Brandon Yoder), Medicine Man Meteu (Brandon Dyer), Akela, the Mighty Chief (Jacob Noel) welcomed the Cub Scouts and examined their arrow which records their record in cub scouts. Both were found to be worthy and were welcomed into the tribe of Boy Scouts.
Posted by Leesa Bartu at 8:05 AM No comments:

Exeter-Milligan Timberwolves fall by one point

The Exeter-Milligan Lady Timberwolves fought a hard battle and were ahead by one point with eight seconds left in the quarter finals state tournament game against the Friend Bulldogs.  Unfortunately Friend sunk a basket in those last eight seconds leaving the final score 37-36 with the Timberwolves facing no time left and a loss.
Posted by Leesa Bartu at 12:25 PM No comments:

Snowflakes was the theme for Exeter Cub Scout Pack 218's Blue and Gold celebration this year.  They decorated the Exeter American Legion Home in white snowflakes with snowflake lanterns and beautiful pipe cleaner snowflakes.
The members of Pack 218 opened the evening with a flag ceremony led by Webelos II den member Johnny Babula and then the large crowd was led in a prayer for the food by Wolf den member Braden Capek.
After a potluck dinner, Cornhusker Council Prairie Winds District Executive Jerad Reimers spoke for a few minutes on the Friends of Scouting Program before Cubmaster Leesa Bartu presented the scouts with their rank badges.
Tiger Cub Marcus Krupicka earned his rank badge and the Bobcat rank.  The three members of the wolf den, Braden Capek, Alec Schlueter and Ben Bartu all received their rank badges as did the members of the Bear den, Jackson Beethe, Clint Oldehoeft and Blake Meyer.
Both members of the Webelos II den, Peytan Brandt and Johnny Babula, earned the arrow of light and were presented with the award by their parents.  Peytan Brandt earned all 20 of the Webelos activity pins and received a special patch recognizing this achievement.
Four families in the pack, the Roger Brandt family, the Roger Capek family, the Mark Beethe family and the Dean Bartu family also earned the Fun with our Family patches.
Next on the evening's agenda was the pack Pinewood Derby.  Stanley Rhodes, of Cordova, coordinates the event every year bringing his track and his helpers, Robert Rhodes of Exeter and Lance Larsen of Cordova.  Prior to race time the men had judged the cars for show, but the results were not revealed until after the race.
After each boy raced the others twice, there was one more race off to determine the winner and the results were announced.  In the modified category Blake Meyer won first, Peytan Brandt took second and Braden Capek was third.  In the stock category Clint Oldehoeft was first, Jackson Beethe, second and Johnny Babula was third.
The show results were announced next.  Modified show first place was Ben Bartu, Alec Schlueter was second and Brayden Capek was third.  In stock show Clint Oldehoeft took first, Johnny Babula was second and Jackson Beethe was third.  Winning the Cubmaster's Choice award this year was Marcus Krupicka. 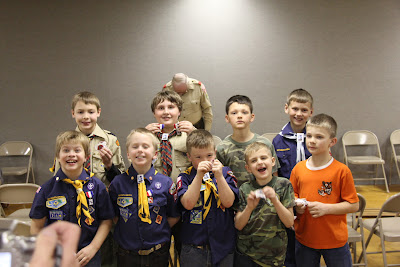 Posted by Leesa Bartu at 8:26 AM No comments: 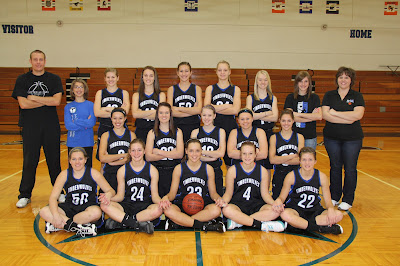 The Exeter-Milligan Lady Timberwolves head for Lincoln Thursday morning.  The send off for the team will be Thursday at 8 a.m. at the Exeter site.  The #5 seeded Timberwolves will meet #4 Friend Bulldogs in the first round of the tournament at Lincoln Southwest High at 10:45 a.m.  If you can't make it to the game it will be broadcast on KTMX 104.9 York Station. Go TIMBERWOLVES
Posted by Leesa Bartu at 6:04 PM No comments: 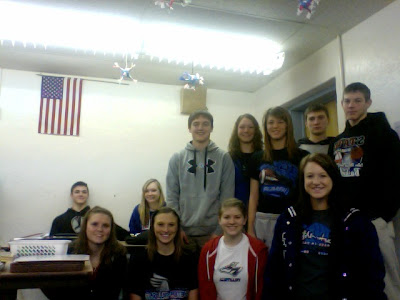 EXETER-MILLIGAN HIGH STUDENTS ARE CONNECTING LANGUAGE AND
CULTURE OUTSIDE OF THE CLASSROOM BY DOING CULTURAL PARTICIPATION AND RESEARCH PROJECTS
By Student reporters Taylor Erdkamp, Megan Zwickl, and Brady Bristol
Ms. Elizabeth Rios’ Spanish II class at Exeter-Milligan has been busy this semester. The class had CPR presentations three times this year (Cultural Participation and Research projects). Each student does four CPR’s during the year, one for every quarter.  In the past students have researched Spanish countries, athletes, artists, and food.  CPR’s give students an opportunity to connect with the Spanish culture and try new thing they wouldn’t normally try.  Some students make traditional Spanish dishes such as tacos or enchiladas.  Others have eaten out at an authentic Mexican restaurant and some students with more artistic attributes draw maps of Spanish countries, including landforms and major cities. CPR’s make students step out of their comfort zone to relate their culture with the Spanish culture, giving them a better understanding of the Spanish language.
Pictured are: Front L-R: Becca Vossler, Megan Waldron, Taylor Erdkamp, Megan Zwickl
Middle: Robbie Androyna, Jackie Luzum, Quinten Loontjer, Jenn Pribyl, Alicia Bigelow, Jacob Kroll and Brady Bristol
Posted by Leesa Bartu at 8:51 AM No comments:

Mrs. Julia Polak’s Reading Mastery Novels class at Exeter-Milligan just finished the book Hatchet by Gary Paulsen.  It is the story of a 13 year-old boy who becomes stranded in the northern Canadian forest after the bush plane in which he is a passenger crashes.  Brian survives for 54 days before being rescued.  He encounters bears, wolves, a skunk, and a porcupine.  Brian gets quills stuck in his leg, and must pull them out himself.
In order for the students to understand about porcupine quills, Mrs. Polak contacted Dave Erdkamp from Exeter, who contacted some other hunters through the Internet, and Nancy Haefer from Moscow, Idaho, sent the class some quills to examine under the microscope.  Mrs. Polak had the students draw what they saw in the microscope so the students would better understand how loosely the quills are attached to the porcupine’s tail and body, and also how hard they are to remove!
Dave Erdkamp also loaned the class a moose antler from a forest moose, similar to the one that tried to kill Brian in the book.  Forest moose are smaller than moose we are familiar with, but the students realized what strong neck muscles it would take to hold up two of them!
The class wrote thank you notes to both Ms. Haefer and to Mr. Erdkamp for sharing the wildlife artifacts with us. 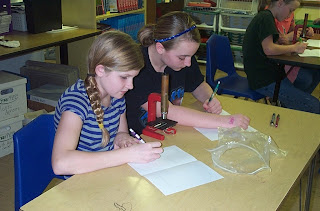 Janey Erdkamp and Kaitlyn Vavra draw the porcupine quills as they appear in the microscope.  Mrs. Polak’s reading class was reading the novel Hatchet  by Gary Paulsen. 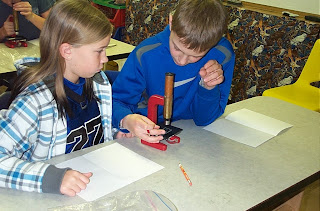 Josie Kresak and Mitchell Manning examine their porcupine quill under the microscope in Mrs. Polak’s reading class.
Posted by Leesa Bartu at 8:41 AM No comments: 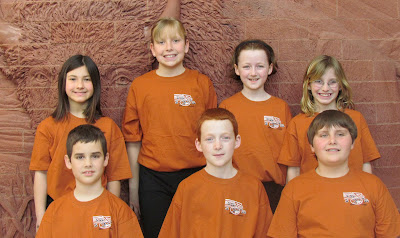