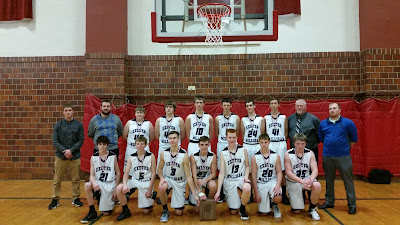 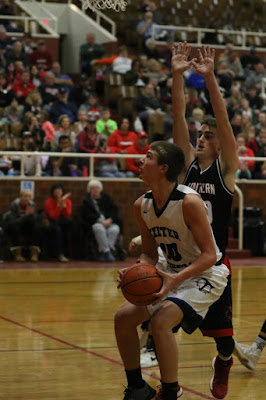 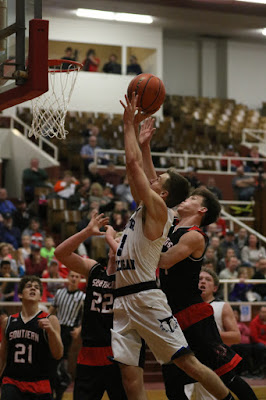 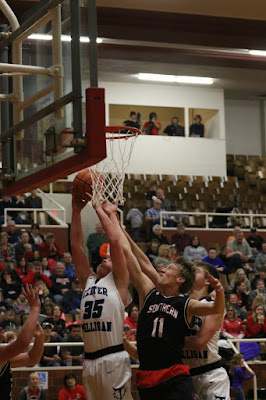 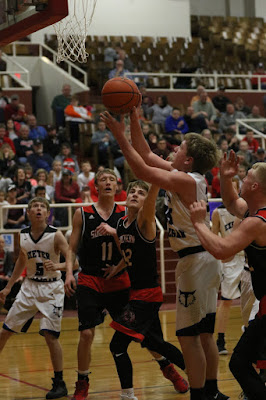 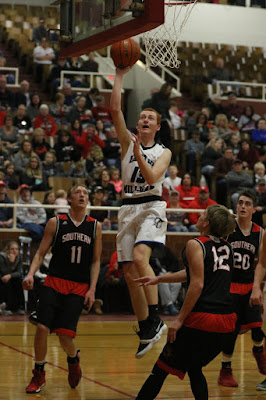 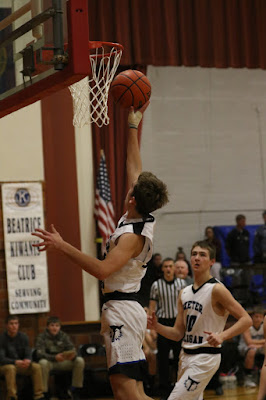 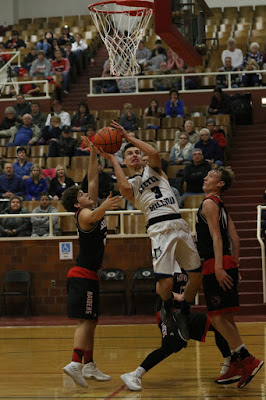 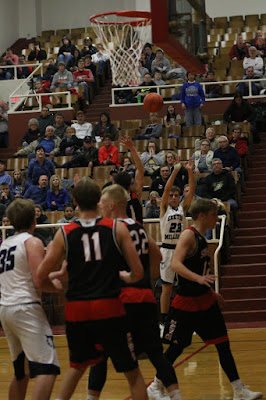 Seth Maxson makes another three pointer in the final minute of the game to bring the score to 35- 34 and the Timberwolves hold on to the lead to beat Class C-2 Southern in the MUDECAS Division B final.
Posted by Leesa Bartu at 6:34 PM No comments: 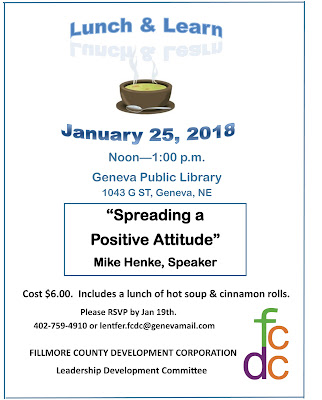 The Exeter Village Board met Wednesday, January 3 for their regularly scheduled meeting.
The board had no concerns or corrections to the minutes and quickly reviewed the invoices and approved the bills.

The two rows of trees would run east and west and be on the outside of the current wind break.  Dinneen assured the board that the additional 250 red cedars would be very hardy trees.

Dinneen has also talked to members of the Exeter Area Community Foundation board about assistance in funding for the project but approached the village board because the tree order needs to be submitted now and “for them to submit a tree order they have to be guaranteed that it is paid.”

The cost for the trees and planting will be $2134 with the possibility of a discount and village board chairman Alan Michl agreed with Dinneen that the new trees, “were a good idea.”

The board quickly reviewed the one and six year road report before hearing from Tyler Doane from JEO on the sewer report.

The board approached JEO to do some research on options for the sewer plant.  The Nebraska Department of Environmental Quality recently adjusted the ammonia limits for sewer discharge. Doane presented a chart with the levels of ammonia tested in Exeter which showed that the new limits will find Exeter in violation.

According to Doane, “Some of the limits were cut by a quarter by the state.  NDEQ seems every five years ammonia levels get lower. They didn’t say anything specific but they always find some new species that can’t handle ammonia as well.  That’s why they continue to get lower.”

Doane presented three options to reduce the ammonia percentage. The first would be land application of the liquid.  His calculations showed that the village would need a minimum of 30 acres for the liquid to be distributed through a pivot.

“You may take some soil samples and put it in a file and then a field rep may come and check it out. You would have to have an agreement between the village and property owner for the right to land apply the water.”

The second option would be to build a mechanical type treatment which would include an ammonia polishing zone.  The current processes would stay in place and then the discharge would go onto rock beds that have air that blow on the rocks.  This would be a secondary treatment that would be a continuous discharge system.  This option would add $18.45 to the monthly sewer bill.

The final option would be to purchase adjacent land and build an additional lagoon.

Michl expressed his concerns about paying for the improvements.  He reminded the board that any sewer improvements have to be paid for through sewer rates. The land application option showed a cost of $14.05 a month which would raise the sewer rates to $25.05 a month.

“Don’t do anything is an option but I don’t know how long that is an option,” explained Tyler, “It’s not just Exeter they are cutting ammonia limits on it’s going to be everybody.”

Michl added his opinion, “If we have to, my first thought would be to put in another lagoon.  We wouldn’t have to worry about a landowner or pivots.  After initial costs, there would be no operating costs or maintenance.  One of the main costs for building a lagoon is riff raff, but we are tearing up a bunch of streets here and we are going to have lots of riff raff that can be used.”

Michl noted that the cost to build a new lagoon would be less than $16.84 extra per month on sewer bills.  “Compared to pivots and maintenance on a pivot that is going to eat us up.”

Vice Chairman Tim Wilbeck agreed, “It makes sense to me.  We don’t have to do anything now.  In good faith, we are trying to stay ahead with this report.”

Board member Mitch Schlegelmilch added, “We are trying to stay in compliance.  We need to be proactive.”

The board didn’t make any decisions and plan to watch the tests results of the ammonia .  They discussed the possibility of raising sewer rates in anticipation of changes to come since the infrastructure for sewer has to be paid for with sewer funds.

The Board approved purchase of land adjacent to the water tower they had discussed in a previous meeting.

The maintenance report was short from supervisor John Mueller.  He notified the board that the well work is scheduled for February.  The board thanked Mueller for his quick and efficient snow removal.
Clerk Becky Erdkamp reported that October sales tax total was $9185.62 and November keno receipts were $902.98.

The next meeting was set for February 5.
Posted by Leesa Bartu at 2:07 PM No comments:

Oliver F. Jensen was born to Frederick and Mabel (Guthrie) on June 16, 1935 on the family’s home place north of Exeter, Nebraska and passed away on January 4, 2018 at Heritage Crossings in Geneva, Nebraska at the age of 82 years, 6 months and 19 days.
Oliver attended grade school at District #20 north of Exeter and graduated from Exeter High School in 1952.

After graduation Oliver worked at Western Electric in Lincoln where he met his future wife. He enlisted in the U.S. Navy on January 4, 1954. He was a helicopter mechanic on the U.S.S. Oriskany for two years during the Korean War. He was then stationed at the Hutchinson Naval Air Base in Hutchinson, Kansas until he was honorably discharged on November 11, 1957. He was very proud of his service to his country.

During his service in the U.S. Navy he was united in marriage to Betty Krupicka on October 15, 1955 in Milligan, Nebraska. To this union, two children were born, Denese and Randall.

After serving his country, he was employed at the Chevrolet dealer in Tecumseh, Nebraska until the business burned to the ground. The family then moved to Exeter in January 1965 where Oliver owned and operated his own mechanic business. He then worked as a gravel pumper for Central Sand and Gravel in Belwood, Nebraska until his retirement. After retirement he worked for Orscheln’s Farm Store in York, Nebraska for 15 years with his last date of employment on December 24, 2016. He truly loved his Orscheln family.

Oliver enjoyed roller skating and going to dances. Many weekends were spent dancing and playing cards with various card groups. He enjoyed attending activities for the kids, grandchildren and great grandchildren. He was especially fond of working on old tractors, cars, and motorcycles with Randy. He was always tinkering on something. He was a great woodworker and has a great collection of wood toys handcrafted by him. His family was his pride and joy.

Oliver was preceded in death by his parents, Frederick and Mabel Jensen; a sister, Engletta; and brother, Carryl.

A Funeral Service was held for Oliver on Monday, January 8, 2018 at 2:00 p.m. at the Farmer & Son Funeral Home – Kotas Chapel in Milligan, Nebraska. Kim Dunker officiated the service. The recorded selections “You Are My Sunshine,” “I Walk The Line,” and “In Heaven There Is No Beer” were played during the service.

Pallbearers included Steve Becker, Ron Petro, Roger Ideus, John Volkmer, Dennis Volkmer and Warren Hall. Interment was held in the Bohemian National Cemetery with Military Rites performed by the Milligan American Legion HSSK Post 240. Farmer & Son Funeral Home conducted the services and online condolences can be left at www.farmerandsonfuneralhome.com Memorials are suggested to the Exeter Fire and Rescue and the Milligan American Legion.
Posted by Leesa Bartu at 10:56 AM No comments:

Jerry, as he was commonly known, graduated high school in Exeter, Nebraska. He joined the Army at the age of 18, serving in Vietnam from May 13, 1968 until he was Honorably Discharged on October 18, 1969. After returning from Vietnam, he lived in York, Nebraska and worked at Sunflower Beef. He then moved to Thayer for a short time before returning home to Exeter in 1978 and working at Farmland Foods in Crete for over 30 years, before retiring in 2007.

Jerry was a collector of many items including trading cards, coins and stamps. He loved to play cards ( pitch and poker) with family and friends. During the last several years of Jerry's life he enjoyed riding around in his golf cart and spending time with his dear friends Lester and Linda Becker.

Jerry was preceded in death by his parents, Forrest & Jo.

A Funeral Mass for Jerry was held on Monday, January 8, 2018 at 10:30 a.m. at the St. Stephen’s Catholic Church in Exeter, Nebraska. Fr. Mark Pfeiffer officiated the service. Agnes Anderson accompanied Jessica Ruhl who sang “Amazing Grace,” “Here I Am Lord,” “On Eagles’ Wings,” and “How Great Thou Art.”

Pallbearers for the service included Lester Becker, Rich Roettger, Peter Michael McShane, Travis Combs, Jeff Combs, and Jeff Grabill. Interment was held in the Exeter Cemetery with Military Honors performed by the Exeter American Legion William Sullivan Post 218. Farmer Funeral Home of Exeter conducted the services and online condolences can be left at www.farmerandsonfuneralhome.com. Memorials are suggested to the Family.
Posted by Leesa Bartu at 10:53 AM No comments: