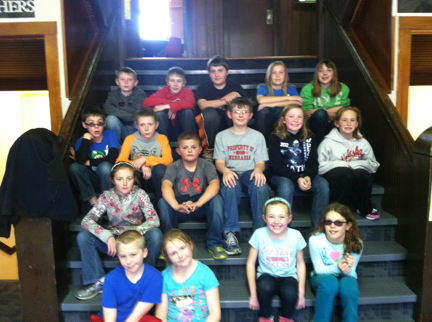 Some of the students in Mr. Bob Mahoney's PE classes at Exeter-Milligan took part in the Hoops For Heart Fundraiser. As a group they raised over $1,200 for the Nebraska Heart Association.  Pictured are:

Don't forget the Exeter Ball Association will have their annual Baked Potato Feed/Ice Cream Sundae Bar this Sunday, April 7th from 11:30-1:30 at the Exeter American Legion Home.  Raffle tickets will be available for lots of prizes including $100 cash, Exeter Aquatic Center passes and much more!
Posted by Leesa Bartu at 9:20 AM No comments: 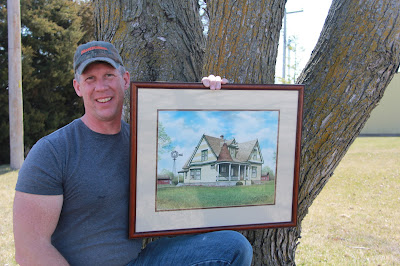 It was in an art class at Exeter High School that Michael Bristol fell in love with watercolors.

Bristol, a member of the Exeter class of 1984 and a Cordova Native , started drawing as a child, and unlike many children, his parents didn’t discourage his artwork, “My parents saved a lot of things that I did, they definitely encouraged my art.  I would not have been able to build my shop or start if they had not supported my efforts.”

After high school Bristol built a little shop in Cordova and began “to pursue an art career on my own.”  From 1986-1992 he painted in his shop in Cordova, producing some commissioned watercolor pieces including a special painting, “Early Morning Railroad Town” for the Stuhr Museum as part of a limited edition of prints that are still being sold to raise funds for the Museum research.

Bristol kept busy with local work including a series of tractor prints commissioned by the Clouse family in Friend.  Bristol also had one of his paintings of the Friend Elevator featured on the cover of “Nebraska History” Magazine in 1990. He produced 36 paintings of Seward which are on display at Jones National Bank, and were used by the bank to create calendars.

Bristol’s work has also been featured in the Midwest edition of the “New York Times,” on the cover of the magazine “Victorian Homes,” and in “Home” magazine where he was featured in the “art to watch for” section.

You can find over 1200 paintings done by Bristol all across the nation but viewing locations in Nebraska include several Nebraska County Courthouse paintings on display at the Hruska Law Center in Lincoln, the York Hospital, the Minden Exchange Bank and at Cornerstone Bank, as well.

Even though he was keeping busy in Cordova, Bristol felt the need to get out and experience something more. He went to Lincoln first, working in restaurants and restaurant management before heading to Omaha where in 2000 he got a job with the Omaha Community Playhouse, “I really started painting again, doing sets and scenery.”

It was there he created the giant works of art that are on display in the San Carlo room at the Warren Opera House in Friend.  They are from a production of “Annie Get Your Gun” from 2004.  “These pieces are just a small amount of the scenery in the show.  I spent about a day to a day and a half a piece start to finish on these,” explained Bristol.

Bristol saw the significance of these pieces for the Friend Historical Society and the restoration of the Warren Opera House, “The show (Annie Get Your Gun) takes place during the era the Opera House was built and these would have been similar to advertisements people in Friend saw in 1887. I asked the director at the playhouse if we could borrow them for some time but my ultimate goal is to have them as part of the permanent collection.”

During the time Bristol spent in Omaha he also created some murals for the pizza chain Sam and Louie’s in Omaha. In 2008, he headed for Texas to do scenery for the Dallas Children’s Theatre. He spent a year there but after both his parents passed away he realized how much he missed Nebraska.

In 2009, he headed back to Cordova, purchasing his childhood home from his siblings and restoring the 1908 jewel to its glory. Bristol has begun to paint again when he has time between working in Exeter at Horizontal Boring and Tunneling Co. and in Friend at the Pour House.

Bristol is back for now and given his dedication to his restoration project, probably for good “I love it here and I love the people here – you go away for a while then you realize you are happiest here. The best part is that I am home and close to my family. I had to go check it out, I met some great people and experienced a lot of things but it is here on the Nebraska plains that I draw my inspiration.” 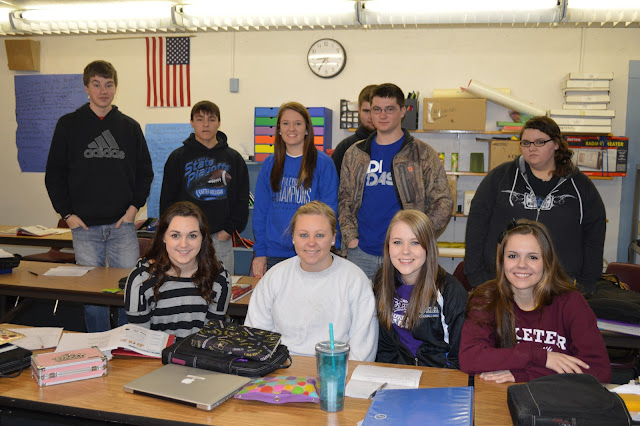 In Spanish II, our class participated in decorating eggs as it is done in Mexico. In Mexico, the eggs are also dyed, but then a small hole is cut into the egg and it is then filled with confetti. This all started from the origin of the confetti egg. It is believed that Marco Polo brought back egg shells filled with perfumed powder from China. A new fashion of giving them as gifts grew in his native Italy. It spread to Spain as part of religious celebrations before the Lenten holidays and then in the nineteenth century Carlotta, wife of emperor Maximilian, brought them to Mexico. In Mexico, confetti replaced the perfumed powder.   The eggs are made and broken up for fun any time of the year. In the United States, the eggs are boiled and are then put into a dye. Easter egg hunts are held for children in the weeks before Easter. When Easter Sunday arrives the Easter Bunny comes and hides the eggs for the children to find. 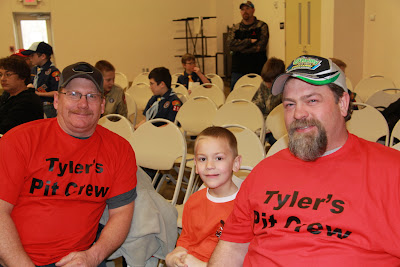 Exeter Cub Scout Pack 218 Tiger Cub Tyler Due (middle) is pictured with his pit crew, his dad, Travis Due on the left and friend Pat Huggins on the left. 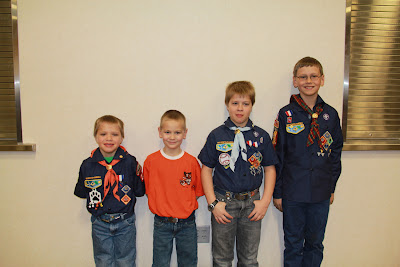 Exeter Cub Scouts who participated in the Prairie Winds District Pinewood Derby are pictured from the left Mikey Bartu, Tyler Due, Ben Bartu and Clint Oldehoeft.  Ben ( also pictured below, second from the left) won Best of show in the realistic division for the second year in a row. 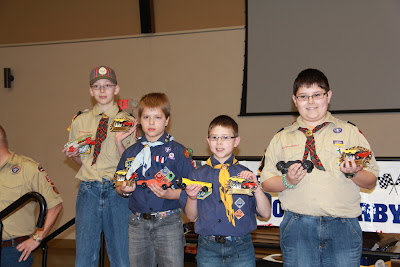 Want to perk up the parks this spring?  Donations are being accepted for an Exeter Park Fund.  The funds will be used to purchase flowers, shrubs, mulch and other items to brighten up Exeter's parks.  An account has been set up at Generations Bank and donations are gladly accepted.

Tonight is the Exeter Village Board monthly meeting at the Village Office at 7 p.m.
Posted by Leesa Bartu at 10:18 AM No comments:

Congratulations on this post season honor!
Posted by Leesa Bartu at 7:30 AM No comments:

New at the Exeter Public Library

Come to the library and support Exeter in the Southeast Library System's "Library Madness" competition!
Posted by Leesa Bartu at 7:30 AM No comments: