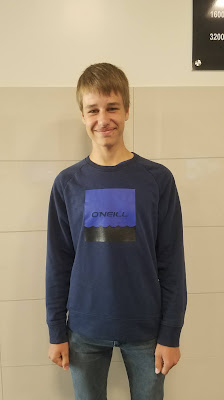 “Due to COVID they needed to place one third of last year’s (foreign exchange) students needed placement.  Host families didn’t want to host this year.  Many schools wouldn’t take students because of COVID.  I had some friends that couldn’t go,” explained Schoofs.

Finally his dad went to source he was familiar with, the Sheffield family.  Adrian’s half sister, Hanna Klose, was a foreign exchange student in 2015 and was hosted by the Sheffield’s.

Schoofs, from Duesseldorf, Germany stated that his main goal in coming was to improve his English.

His sister, Hanna, was the catalyst in this adventure, “She really liked it and she told me a lot about it.  I am kind of the only one (in my family) who doesn’t speak fluent English.”

Schoofs spent a week in Chicago when he was younger but this is his first visit on his own to America.  He really likes the food and the fact that “everyone can drive. After (football)  practice I always have a ride home.”

Although he does not have host siblings at the Sheffield’s things are “going great.  I’m not really often home, only for a few hours.  Most of the stuff I do at home is sleeping and eating.”

He does miss his family and friends at home, and soccer.  He plays right wing on a soccer club team.  He has learned a lot about American football since he got here, as he is a student manager on the Exeter-Milligan/Friend football team.

He has been to two Husker games so far and will do some traveling with the Sheffield’s. He is looking forward to basketball season and plans to run the 100 meter dash in track.

Unfortunately he will have to redo this school year when he returns home but many of his friends are doing exchange programs so he won’t be alone in his classes.

Schoofs expressed that he hoped that this experience would help in his chosen career, law, “I can study law in the Netherlands in English.”

He hopes to see his parents in the Spring when they visit America.  He feels pretty comfortable here, “People here are very nice because it’s a small town.  Everyone knows each other and you do a lot together.  It’s so different from a big city as you don’t know each other even though you are living not far away.”

A private family Funeral Service will be held for Robert on Monday, November 15, 2021 at Farmer Funeral Home in Exeter.

A private Graveside Service will be held in the Exeter Cemetery following the Funeral Service.

A Memorial has been established as the Robert Trauger Memorial Fund. Contributions and condolences may be sent to Farmer & Son Funeral Home, 242 N 10th Street, Geneva, NE 68361. The Memorial Fund will be designated at a later date to an antique steam show to help carry on Robert and Shirley’s desire to perpetuate pioneer memories and also to the Capital Humane Society.

Robert Edmund Trauger, lifetime resident of the Exeter area passed on at age 93 in the same room where he was born. He resided in the 133 year old family home his entire life.
Robert was born on January 23, 1928 in Exeter, Nebraska to Charley Trauger and Ethel (Downey) Trauger.

Robert attended District 22 country school before entering the Exeter Public School system where he graduated with the class of 1946.

Robert married Shirley Gillan Trauger on August 18, 1953 and together they raised one son, Charles, and two daughters, Lynnelle and Melissa. When Robert proposed to Shirley he gave her a car instead of a ring! Her mom was not impressed, but he did follow through and get her a diamond before the wedding.

Robert was a lifelong farmer who farmed the same land his grandfather had bought from the railroad in 1878. Along with farming, he raised cattle, pigs and was an Archer Oil salesman.

As a child, he loved to travel with his parents and brother, Don. In 1931, when he was three, he met Amelia Earhart and shook her hand. She made a huge impression on him and he remembered that meeting fondly throughout his life. He attended the 1934 Chicago World’s Fair with his family and that also made a lasting impression which fostered his love of travel later in life.

Robert was an 80 year member of the Exeter United Methodist church where his grandfather was a founding member. He served as President of the Board of Trustees. From 1955 until the mid 1970’s, Robert and Shirley were co-leaders for the Methodist Youth Fellowship.

Robert was on the organizing board for the Fillmore County Soil Conservation. Throughout his farming career, he supported soil conservation and other land programs. He was passionate about change and spoke before the Nebraska State Legislature to change the state’s boiler inspection laws.

He also introduced the antique license plate law to the Nebraska Senate Chamber and spoke before the committee about his proposed bill, which eventually passed.
He was inducted into the Great Navy of the State of Nebraska. This honor is bestowed by the Governor to those who have contributed in a significant way to the state of Nebraska.

He also enjoyed architecture and construction. He drew the plans for the Exeter United Methodist Parsonage. He applied his architectural talents to the family home as well by adding on and remodeling it numerous times over the years. He didn’t have a fear of heights and always ran across the beams of the buildings he was constructing, much to the astonishment of those who were watching from below!

Robert loved to collect antiques and travel, often combining the two. He and Shirley traveled the United States before having children.

Robert was an avid antique car and steam engine collector his entire life. In 1950, Robert purchased his first antique car. This car was the beginning of his collection, which he continued to add to his entire life. In 1968, Robert and Shirley started, “Old Timer’s Day,” an annual event held on the family farm until 1986. It was an event dedicated to perpetuating pioneer farm memories. The event drew thousands of people from across the United States to experience antique farm machinery and cars in action. In 1979, Robert and Shirley were featured on a PBS documentary to discuss their varied collection and antique show.

Family trips were so memorable. He loved road trips and always made sure we left around 3 in the morning, but the early departure always meant we would stop for a big breakfast. He loved stopping at every historical sight and vacations were the time to ask for souvenirs because dad couldn’t say no. He enjoyed being outdoors and the life of a farmer suited him perfectly. He was a very private man who was soft spoken and known for his kind and compassionate spirit. He was of the opinion that you have to be honest, prepared and courageous. He believed in doing a good deed daily, being polite, trustworthy, loyal and courteous. He was a loving and kind dad and grandpa who was always there for each member of his family. He was a man of his word and a pillar of strength. His amazing spirit will live on in his family.

Robert was welcomed home by his loving wife and best friend of 64 years, Shirley; his parents, Ethel and Charley Trauger; brother and sister-in-law, Donald B. and Elaine Trauger; in-laws, Earl and Ethel Gillan; and brother in law, Duane Gillan.

For State Volleyball the Timberwolves will meet Winside at 7:30 PM on Thursday at Grand Island Northwest.

Mr. Bob Mahoney's Expressive Writing class at Exeter-Milligan is learning to write sentences and paragraphs.They are correcting grammer and spelling, and also learning the proper rules of using periods and capital letters. 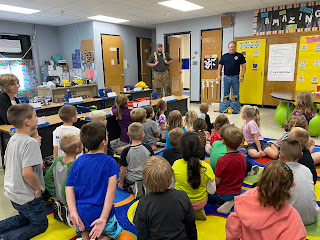 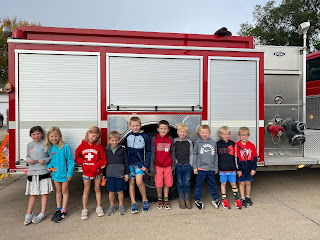 During the month of October, elementary students from Exeter-Milligan took time to learn about fire safety. Students in grades Kindergarten, First, and Second were able to get a close up look at a fire truck. They were even lucky enough to get a ride. Students also enjoyed learning more fire safety tips from some local firefighters. Thank you to the volunteers from the Exeter and Cordova Fire Departments for taking the time to visit with our students.

Kindergarten students pose for a picture in front of the fire truck. 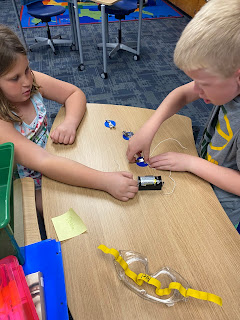 Lynn Jurgensen and Axel Erdkamp work together to complete their circuit. 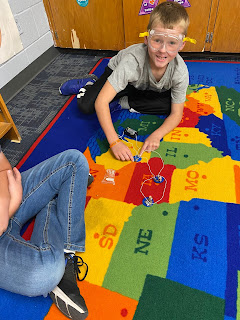 Archer Kanode is excited to see if he can get his light bulb working.

The Exeter-Milligan fourth graders have been learning about energy transfer and how energy changes. Their task was to build a circuit and make the light bulb light up.