The Exeter-Milligan One Act team performed “And Then There Was One: A Spoof” by Michael Druce in Exeter on Sunday, November 6.  The play was a “who done it” with all but one predicted to die.  The group will perform the play again in Milligan on Sunday, Nov 20 at 2 p.m. in the auditorium.  Actors include Jozie Kanode, Troy Kallhoff, Neal Scott, Jasmine Turrubiates, Logan Krupicka, Morgan White, Kierra Papik, Kmila Benitez, Tucker Svec, Lily Jeffries, and Liberty Johnson.  Their tech crew includes Olivea Swanson, Savana Krupicka and Taylor Pribyl.  The students are directed by Denice Kovanda and Kara Myers.  The will also perform the play at their district competition in Shickley on November 16.

After the play attendees were treated to a variety of desserts in the commons hosted by members of the Exeter-Milligan FCCLA (Family, Career and Community Leaders of America). 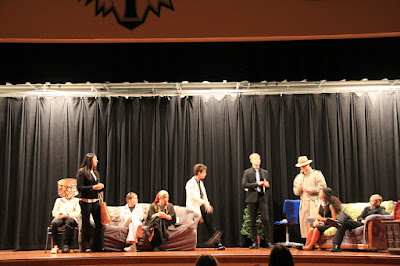 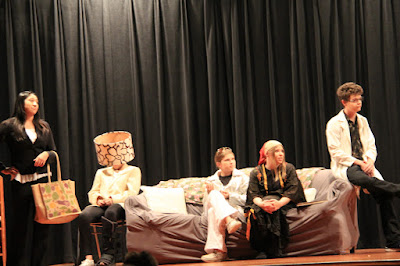 Arguing about “who done it” are from the left Emily Plain (Jasmine Turrubiates), Margaret LaRue (with the lampshade on her head)(Lily Jeffries), Presley York (Kierra Papik), Delores Biggs (Morgan White), and Albert Prince (Neal Scott). 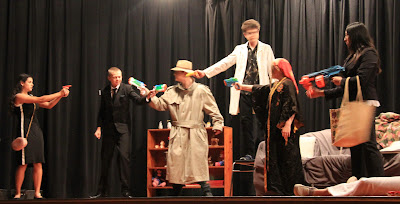 Everyone in the Exeter-Milligan One Act “And Then There Was One: A Spoof” had their “guns” drawn in this scene from the left: Heather Starlett (Kmila Benitez), Matthew Charisma (Tucker Svec), Horatio Miles (Logan Krupicka), Albert Prince (Neal Scott), Delores Biggs (Morgan White), and Emily Plain (Jasmine Turrubiates). 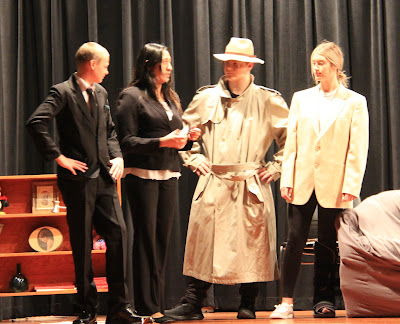 The characters in the Exeter-Milligan One Act “And Then There Was One: A Spoof” share their concern about disappearing chocolate penguins.  Pictured from the left are Matthew Charisma (Tucker Svec), Emily Plain (Jasmine Turrubiates), Horatio Miles (Logan Krupicka) and Margaret LaRue (Lily Jeffries).
Posted by Leesa Bartu at 7:30 AM No comments:

The Exeter precinct had over 200 in person voters along with many additional voters who chose to use the early ballot options.

In addition to statewide offices, Exeter voters had the option to re-elect two village board members, Justin Harre and Jim Anderson.  Both were reelected to serve the village.

The race for Exeter-Milligan school board had three incumbents running along with two challengers on the ballot and one write-in candidate who waged a campaign on social media.

The voters returned all three incumbents, Adam Erdkamp, Kendra Jansky and Dan Kallhoff to the school board.  After tabulating the unofficial results for all four of the counties that the district encompasses, the margin was just 32 votes between Dan Kallhoff  with 352 votes and Anthony Due at 320.  Jason Pribyl fell short with 285 votes.

Exeter-Milligan Kindergarten class has been learning about Body Parts in Science Class. They have learned about internal organs and what the heart, lungs, stomach, and brain do for us. They have learned how important bones are to the body and made a skeleton. For external body parts, they made a scarecrow. They learned how important the thumb is. First they wrote their name, ate a cracker and picked up pennies using their whole hand. Then the thumb was taped down and they had to do the activities without the thumb.

Their goal was 35 pints of blood but they collected 38 pints of blood.  There were 42 donors registered with just four deferrals and three double red donors along with 32 whole blood donors.

Lunch was provided by the Methodist Church ladies.  The workers were Evelyn Michl, Janice Miller, Bonnie Cudaback and Pat Sudrla.

Doris Hall and Ruth Ekeler served as co-chairs of the event.

For those living in the Village of Exeter OR the Exeter-Milligan School Board these are the registered candidates:

School Board vote for 3:

Exeter Village Board - vote for 3 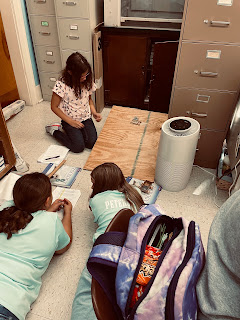 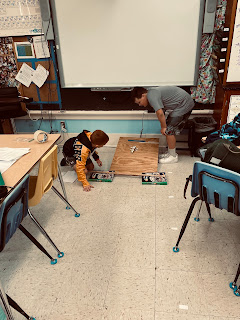 The 6th grade science class is currently learning about the engineering design process.  As part of our unit, we are building a model car that will travel the farthest down a ramp.  They had to brainstorm different models and then analyze them to see if they meet the criteria and constraints that were part of our problem.  They selected 3 designs and then did a decision matrix to determine which was the best solution.  We are currently in the process of testing our cars.  We will analyze the results and then make changes to our designs to improve our models. 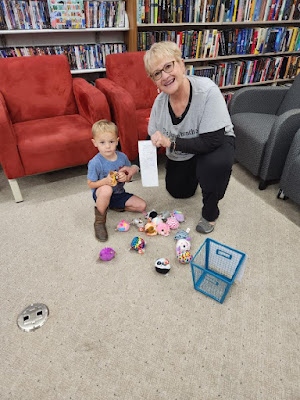 Congratulations to Jordan Sudrla who was the first one to turn in his list of 10 books read (or were read to him) at the Exeter Public Library.  Jordan got to choose a Teeny Beanie to take home.  Jordan is the son of Nick and Katie Sudrla and is pictured with librarian Pat Sudrla.