The Exeter Village Board met on Tuesday, June 7 at the village office.  Board member Justin Harre was absent. The board quickly approved the minutes and invoices before the final reading of the Coop annex ordinance.

The board approved the motion for ordinance 599 to annex the coop property on the north side of the village.

After a brief discussion the board approved the JEO engineering agreement which Chairman Alan Michl explained,“shows the scope of what they are going to do.”

The board approved closing main street for Exeter days July 30.  The legion will have the liquor license.

Clerk Becky Erdkamp explained that an inspector from the Nebraska Department of Environment and Energy performed a health inspection at the pool and the senior center.  The senior center was written up for several minor serving and cleaning issues but also noted that a sink air gap is required.

The board was puzzled as to why this was now required as the facility has passed inspection for years.  The inspector told Erdkamp that progress on the alternation must be shown by June 10.

The inspector also visited the pool and wrote up several very minor issues.  He threatened to close the pool as the license from the state does not have the correct address and he reasoned that the fire department might not be able to find the pool in case of an emergency.

Erdkamp noted that the state had made the mistake on the license, not the village.

Michl planned to call Senator Brandt office to talk about the inspections.  Erdkamp mentioned that they are working on getting  local plumber to give an estimate.

She informed the board that the auditors are hoping to have a draft to present to the board this month and would like to hold a special meeting before June 30.  They also recommended an additional software for Erdkamp to use and the board approved this purchase.

Erdkamp received a complaint from a resident that the dumpster at the pool was blown into a vehicle by the wind on Memorial Day.  The board noted that the issue would be handled by insurance.

It was also noted that the village will receive several pieces of playground from the school that will be placed at Gilbert’s park. The board approved a donation of $100 from keno funds to the Exeter-Milligan FCCLA cancer 5K event this summer.

Next meeting was set for Wednesday, July 6.

It seems that Exeter weather is either flood or drought this year.  Wednesday evening thunderstorms cancelled baseball games and brought between 3 1/2 to 5 inches of rain to the area.

Exeter Public Library has begun their summer reading program “Dream Big Read.”  The program meets on Fridays during June for Kindergarten through third graders.  There was a special preschool program on Friday, June 15th.  Participants have been reading books, doing crafts and playing games at each session.  At the end of the meeting they can check out books and movies.

Exeter Pack 218 scouts were guests of the Advanced Bio Energy Ethanol Plant on Wednesday morning.  Plant Maintenance Supervisor Dan Mainwaring showed the scouts the entire cabinet of plans that were used to build the plant and shared with them some plans for a tank that was added recently.  After showing them the plans Mainwaring showed the boys the tank that was built and how the tank matched up to the plans explaining the importance of plans and following the designers specifications.  Mainwaring also talked about different types of engineers and their different roles in building our country.  The Webelos scouts in the pack were working on their Engineering pin.

Area residents will have the chance to find out whether their children are as safe as possible in their child safety seats during an upcoming FREE check-up event.

This event is a FREE opportunity to have trained technicians determine if a child is riding as safely as possible or if changes in positioning or seat use could help them to be safer. Those who are planning to have seats checked are asked to allow about 30 minutes per child safety seat. 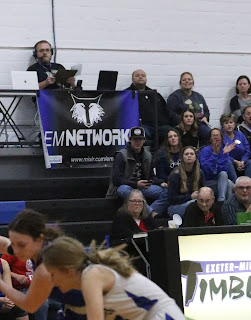 Eric Johnson broadcasts from his seat in the Exeter site gym during a home basketball game.  Johnson, along with Kelsey Bigelow started the network to make Exeter-Milligan sports available to those not able to attend the events in person.


What started as a lament about not getting any broadcast experience in high school turned into a brand new adventure for broadcast journalists Kelsey Bigelow and Eric Johnson.

The two started the EM Network after a conversation this summer.  They wanted to combine their love for the Exeter-Milligan Timberwolves and exposing students to the world of broadcasting.

“We put two and two together.  Give students a platform to shine or if they  wanted to learn broadcasting,” explained Johnson.

They approached Exeter-Milligan Superintendent Paul Sheffield and he was immediately on board.  They also found support from local businesses and patrons to get their enterprise up and running for the fall sports season.

Their product is all streamed online.  They, of course, cover things live and then that is podcasted and came be listened to again.  Currently all of the games they broadcast this year can be listened to online with the advertising included.  “Sponsors help with costs incurred with running the website along with some travel and maintenance costs,” added Johnson.

Johnson is using his own equipment to produce the game calling and hopes to donate it to the school to enrich the broadcast experience for students.  He has been involved in broadcasting for the last 16 years.  A Fillmore Central graduate he attended Doane before finding a spot at SCC in Beatrice where he graduated with a degree in broadcasting.

Bigelow, an Exeter-Milligan 2018 graduate is currently in her final year of school in Kansas State with a major in Journalism.  She has been instrumental in the social media side of the network.  She has done individual interview of athletes and coaches and posted them on their facebook page and website.

Bigelow commented, “It has been amazing to see how much the community actually appreciates having the EM Network. In a way it brings more community together and allows family living far away to still be able to tune in and listen to the game. It's also been fun to talk to some of the athletes and not only give them exposure for their accomplishments, but also to remind people that just like we discuss with college athletes, high school athletes are also ‘student-athletes’ and have so much on their plate other than sports.”

And listen, they have. So far they have had nearly 4,000 individual listens with over 630 hours of total listen time since September 4.  Next year they plan to have more coverage at MUDECAS tournaments along with Crossroads conference events.

They awarded their first EM Network MVP award this year and look to continue this tradition.

“From just a random thought everyone seems happy with it, so I’m happy,” concluded Johnson, “It fills a niche of giving back to the school and the community.  I always wanted to do something.  This shows an opportunity for students, another career path.”

The EM Network covered the CRC All-Star games this summer before preparing for a busy fall covering more games this year.

They plan to start back up the fall covering more events looking to become bigger and brighter in their second year. 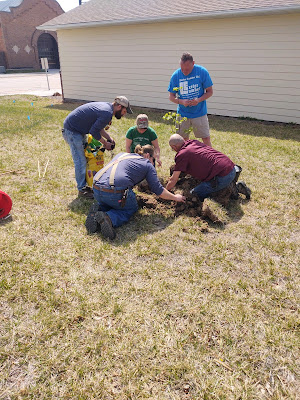 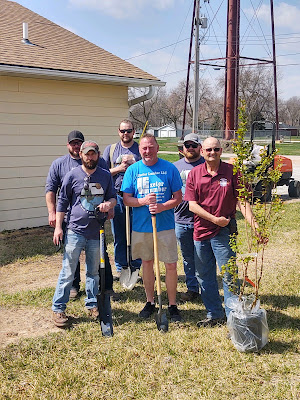 The trees were planted in the downtown park lot close to where a gazebo and handicap swing will soon be installed.

POET Fairmont also had a team in Fairmont picking up trash at the local parks.

Alan Louis Miller was born to John Oliver Miller and Melba Rose Laufmann on Feb 2, 1946 in Friend, Nebraska and passed away on June 7, 2022 at New Hanover Regional Medical Center in Wilmington, NC at the age of 76. He was one of 3 children in the family.

He spent more than 40 years working for IBM, He took the acronym seriously (I’ve Been Moved) spending time in Omaha, NE, Baton Rouge Louisiana, Annandale, Virginia and Gaithersburg, Maryland.
He was married to Cecilia Motley of Washington, DC on November 18, 1989 and they raised 2 wonderful sons.

Al will be remembered as the jury rigger extraordinaire and his love of Ace Hardware. He spent many years in the Washington DC area and worshipped the Washington Nationals and the Washington Capitals, and like any true Marylander, he loved (and hated) the Washington Redskins. Above all, he loved the Nebraska Cornhuskers, as evidenced by trinkets and memorabilia around his office and garage. If he had a free afternoon, he would typically be on the golf course or fishing in a local pond – those were his passions.
He loved his family, including his animal families. There was not a day that he was not outside in his garden or working on his lawn.

Al was preceded in death by his father and mother John Oliver& Melba Rose (Laufmann) Miller and sister Sharon Harre.

A Graveside Service with Military Honors was held in the Exeter Cemetery following the Funeral Service. The Military Honors were provided by Exeter American Legion William Sullivan Post 218.

Farmer & Son Funeral Home was in care of the arrangements and online condolences can be left at www.farmerandsonfuneralhome.com