The group toured throughout Fillmore County and had the opportunity to see the available industrial sites and buildings in Exeter, Fairmont, and Geneva. Patt Lentfer, Director of the FCDC, also shared information about the communities and businesses throughout the county.

Mayor Rod Norrie and FCDC Board President Karla Jacobson joined the group at the Industrial site on “R” Street to welcome the group and talk about the available infrastructure at the site.

Below: Karla Jacobson talks with Cheryl Brandenburgh of Black Hills Energy as the group rides the bus to the next stop on the Lincoln Area Development Partnership FAM Tour.

Congrats to the Fillmore Central Exeter-Milligan Softball team as they won the district playoffs beating Friend 8 - 0 this afternoon!  Good luck at State Ladies!

Make a Difference Day – Giving Back in America


“Make a Difference Day” will be observed again this year in Exeter by the G.F.W.C. Exeter Woman’s Club on October 15th.

This event is one of the nation’s largest days of serves and takes place each October in America.

The Woman’s Club members in Exeter prepare plates of cookies and as they deliver the plates to the Exeter Care Center and to people in the community they take time to visit with them as well.

It can be so easy to make a real difference in people’s lives.  This could mean doing things as simple as giving a warm embrace to our family members, a friendly smile and hello to someone you meet at the store or on the street.  These simple things can “Make A Difference” in the lives of others and in our lives as well.
Posted by Leesa Bartu at 7:30 AM No comments: 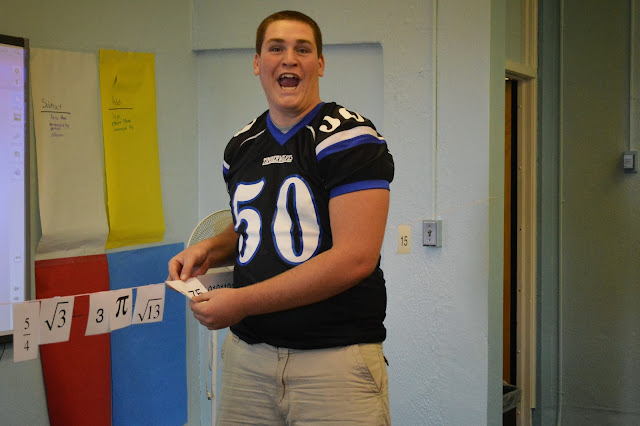 Mary Kay Pribyl's Math Matters class at Exeter-Milligan is reviewing the different sets of numbers. As we discussed which sets several rational and irrational numbers belonged to, we also put these numbers on a number line across the room.  Pictured is Broc Mueller showing his excitement as he puts a number in the correct place on the number line.

Don't forget today is the day to turn in your Proposed School Project Survey.  The school board is looking to all registered voters in the district to get their opinion on the proposed project.  You should have received an envelope with a survey for each registered voter in your household (as long as your address is correct).
Posted by Leesa Bartu at 1:17 PM No comments: 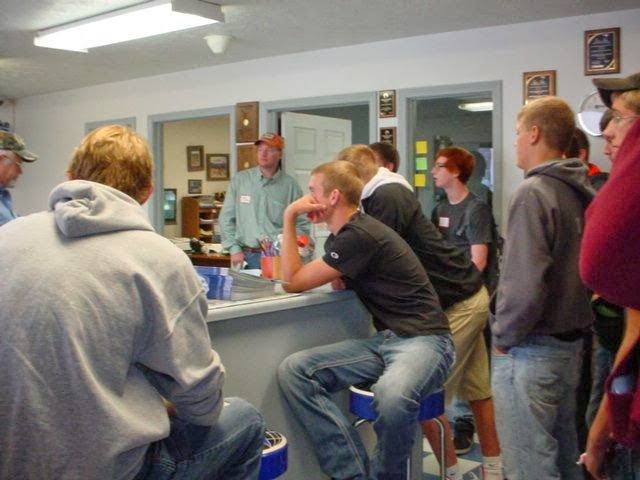 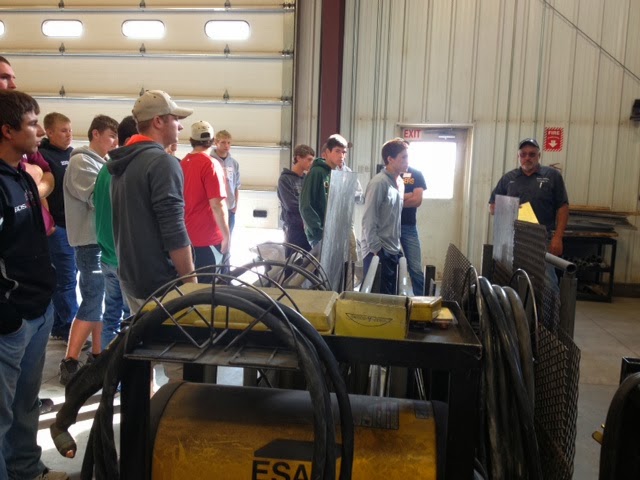 Three tracks were developed so students had a choice and could decide what area interested them the most.  The tracks were Agriculture and Industrial Systems, Education, Health and Human Services, and Business, Marketing and Finance.

The goal of the day was to expose students to some of the career opportunities in Fillmore County.   The FCDC wanted to expose students to all aspects of a business that they would not see from the outside. Allowing the Fillmore County juniors to tour businesses and then hearing comments about employment opportunities and training requirements from people in the business was a great way to learn.  Panels of business people were set up during the lunch time to allow students to hear about even more businesses in the county. Twenty-four businesses hosted the tours with 35+ presenters and another 15 business people served on the panels.

“There was great cooperation from the businesses and the school systems to host a day like this,” according to Patt Lentfer, FCDC Director.  “There was a committee of eight who did who did a terrific job of contacting businesses, setting up the tours, and arranging lunch and snacks.”

Karla Jacobson, President of the FCDC, stated "it is ok for our kids to leave Fillmore County and gain training and experiences. In Fillmore County and the region, there are businesses looking for skilled and qualified workers. We want our students to know that there are opportunities right here in the area for when they are ready to come back, whether year one or year 10 after high school."

A Funeral Service will be held at 10:30 a.m. on Wednesday, October 9, 2013 at Trinity Evangelical Lutheran Church, Cordova, with Rev. Nile Buch, officiating. Interment will be in Exeter Cemetery, Exeter. Visitation will be Tuesday, 11 am to 9pm at Lauber-Moore Funeral Home, Friend with the family greeting relatives and friends, 6:30-8 pm. Memorials are directed in care of the family for later designation.

Lori Lynn Brandt was born August 25, 1959 in Lincoln, Nebraska to Janet (Ricenbaw) and Ronald D. Crawford and passed away suddenly, Sunday, October 6, 2013 at her home in Exeter at the age of 54 years 1 month and 11 days. She spent her early childhood years in the Beaver Crossing area. In 1964, she moved with her parents to a farm east of Cordova. In the fall of 1965, her father was killed in a car accident and Lori and her two brothers and their mother moved to Friend. In 1967, Janet married Joel Pospisil and a new family began. Lori graduated from Friend High School in 1977 and furthered her education at Southeast Community college graduating with a dietary tech degree. In 1979, Lori was united in marriage to Keith Brandt and to this union three children were born, Nathaniel, Morgan and Dalton.

Although Lori was a busy mother and homemaker, she again furthered her education. In 1991 Lori began classes at SECC working toward earning her degree as an LPN, graduating in 1993 at the top of her class. Lori began her nursing career working at Fillmore County Hospital and continued serving patients there until her passing. She had a passion for health care and this passion showed in the care she gave her patients.

On January 1, 2011, her grandson, Brenson, was born and he became the light of her life. Lori spent as much time as possible playing and spending time with him. Lori loved boating and camping and spent many happy weekends at the lake. Every summer they all spent a week in Minnesota camping with good friends, Paul and Becky Erdkamp and their children. Lori loved planting flowers and always had a beautiful yard and garden. She was the family rock, always very happy, had the greatest laugh and just enjoyed people. In her spare time, she enjoyed reading novels, playing poker, hunting with family, and watching Nebraska volleyball.

She was a member of Trinity Evangelical Lutheran Church, Cordova.

She was preceded in death by her father, Ronald D. Crawford, grandparents, Ralph and Winnie Crawford, James and Dorothy Ricenbaw, and Lewis “Tobe” and Ann Pospisil, and an infant nephew, Mark Rodney Crawford.
Posted by Leesa Bartu at 12:52 PM No comments: