Marilyn Marie Manning was born in Exeter, Nebraska to Frank and Helen (Komarek) Murphy on August 1,1930, and passed away on February 7, 2015 in Lincoln, Nebraska at the age of 84 years, 6 months, and 6 days. She had two sisters and two brothers who preceded her in death.

Marilyn was raised south of Exeter on a farm. She attended country school, parochial school, and then high school at Exeter Public School in Exeter, Nebraska. She graduated from high school in 1947. She then moved to Lincoln to live with her sister, Madeline while she attended the University of Nebraska-Lincoln, where she received her Teaching Certificate. She returned to Exeter where she taught school for two years. In 1949, she married her high school sweetheart, Thomas B. Manning. They resided in Exeter for one year, and then moved to Burress, Nebraska where they raised their eight children. Marilyn’s passion in life was to raise her children by example. She lived her life to love, laugh, and learn. Each day was filled with just that. She passed these gifts on to her children, grandchildren, and great-grandchildren. She was compassionate, and always giving in all that she touched. She taught her children and grandchildren to be truthful, fair, and hardworking. She always encouraged them to find time for work, play, and enjoy life to the fullest extent. She shaped their outlook on life to “be the best that you can be.” Her greatest joy was having family gather for holidays with all the laughter, fun, and excitement of the family interacting.

Marilyn was married to Thomas B. Manning on June 11th, 1949. They spent their Honeymoon at Grand Lake, Colorado. To them eight children were born. She and her husband Tom had an everlasting love. They loved and respected each other in all walks of life. Getting away for a couple days to celebrate their anniversary was important to them. Most years they would take the family to Grand Lake, Colorado in the summer to enjoy the beauty of the mountains. They continued this tradition as a couple through the years. Their most recent trip to Grand Lake was this past September to celebrate their 65th wedding anniversary.

Marilyn was active in the St. Stephen’s Catholic Church. She was a member of the Altar Society.

She enjoyed membership in GFWC Women’s Club, during which she organized the Arbor Day tree planting for which a tree was planted, and a book given to each baby born in the Exeter area during that year. She loved giving back to the community. Marilyn was also the leader for the “ Pins and Pans” 4-H club, mentoring these young girls in cooking skills, sewing, crafts, and much more. During this time, she wrote a grant to Readers’ Digest for start-up funding to develop a park by the library. The grant was approved, and hence “Story Book Park” was born located behind the City Library in Exeter.

Most enjoyable for her, was being part of the neighborhood. The ladies started their own club, “Burress Belles”. They celebrated life events, birthdays, and good friendship. She hosted her final gathering two days prior to the onset of her debilitating illness. Her dedication to neighbors, friends, and family was present to the very end of the generous life of this remarkable lady. She will be remembered as a fabulous wife, mother, cook, talented writer, and exceptional caring and kind lady. She will be eternally loved, and forever missed.


The Exeter Area Community Foundation Fund is looking for your input.

People who are in the 68351 zip code should have received an Exeter community survey in the mail. For those living outside 68351 who would like to fill out a survey, forms will be available at the village office and Generations Bank. We want to here from all of you!

To stay up to date about the foundation, follow us on Facebook at Exeter Area Community Foundation Fund.
Posted by Leesa Bartu at 10:43 PM No comments: 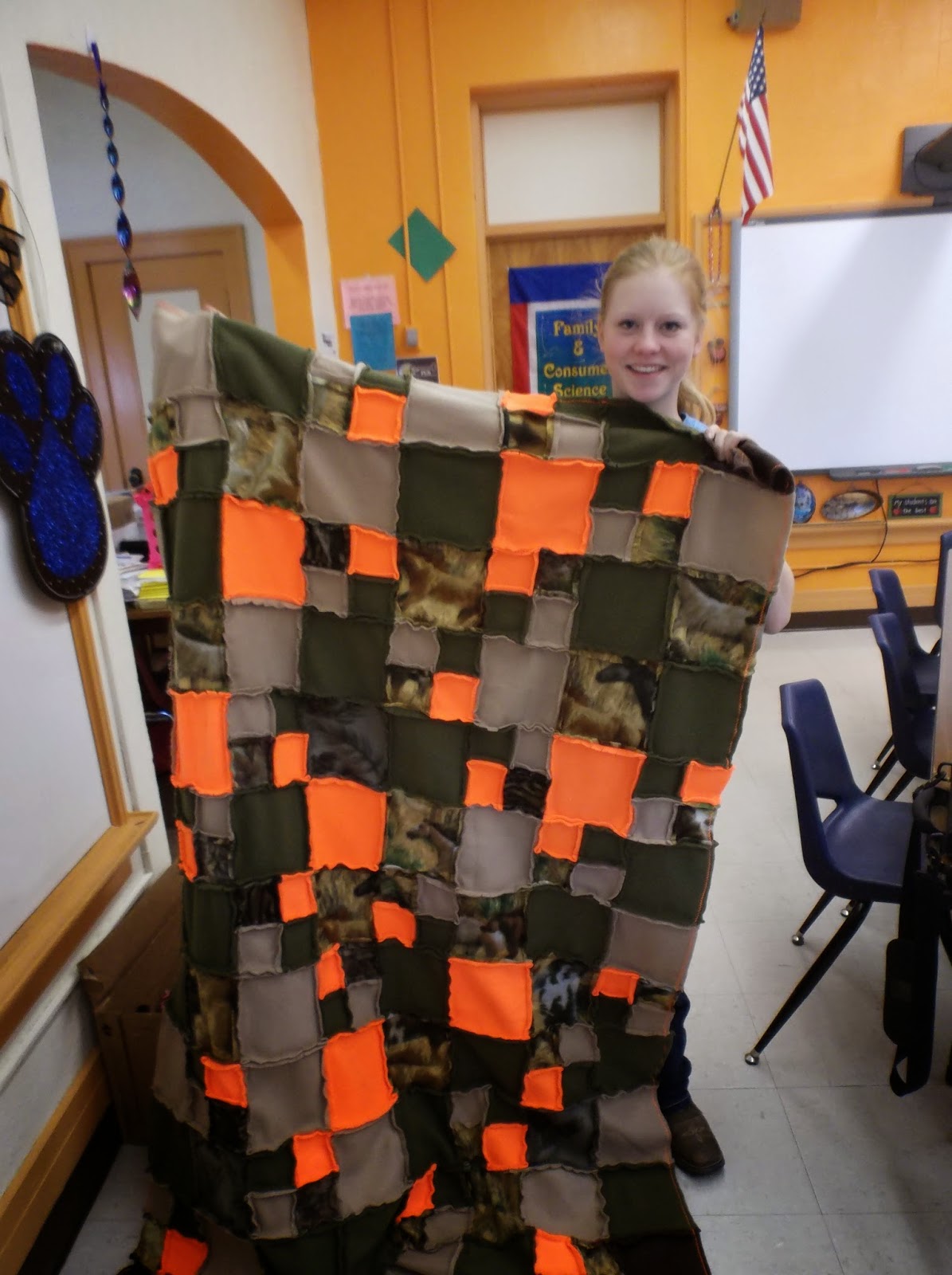 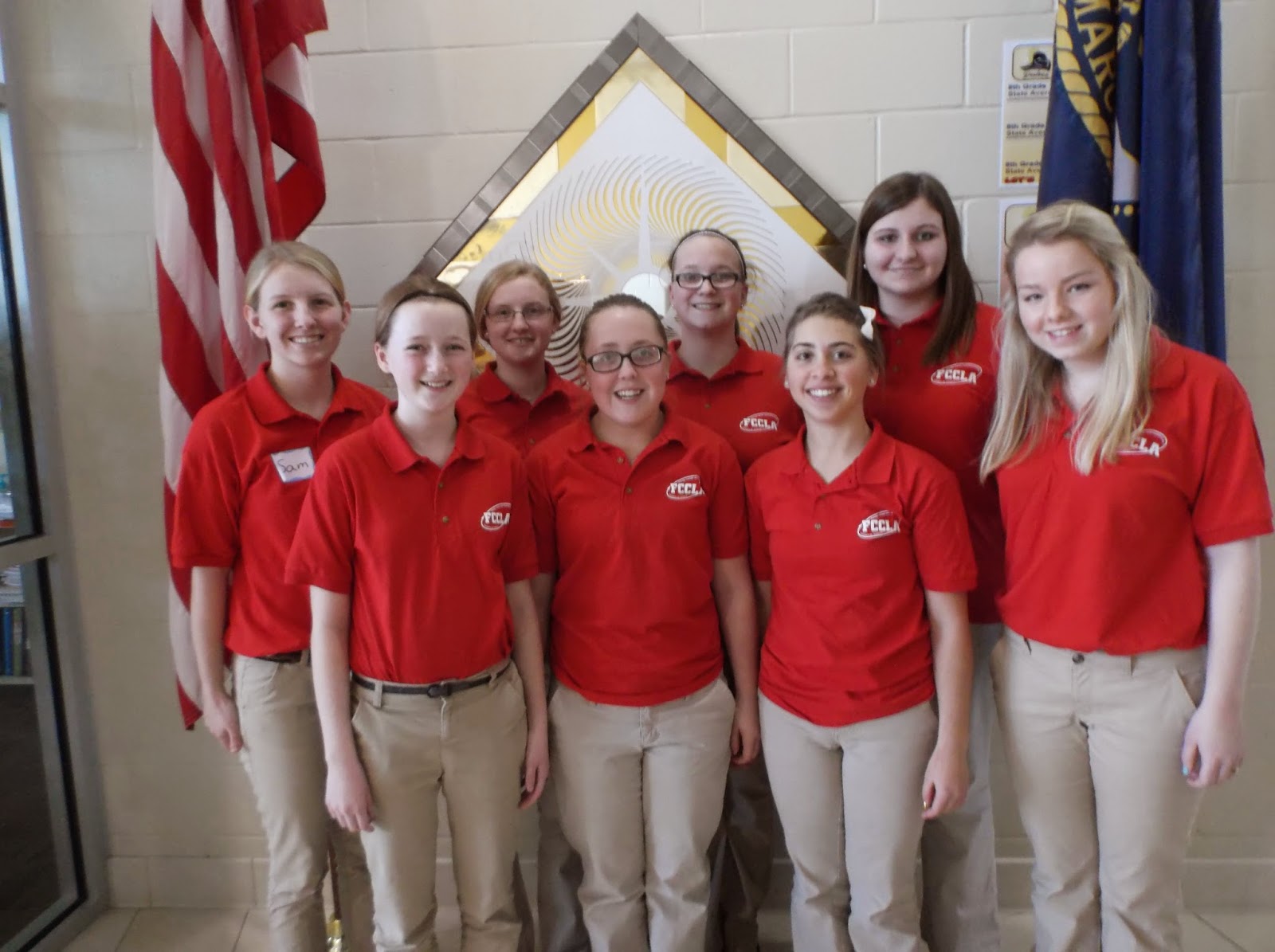 FCS II-
Joan Strate created this "Rag Quilt" out of scrap polar fleece that was within the FACS Dept.  She cut various sized squares out of hunter's orange, moss green, tan, horse motif, camouflage and leaf motif.  This was the easy part, next was how to design the layout of the quilt, so that it would be attractive and coordinate. Joan drew out the design of her quilt prior to the construction.  Pinning and sewing the smaller squares together and than making them into rows with the larger squares was her next step.  Finally attaching all the rows of quilt squares and clipping the seam allowances finished off the project.  Joan is hoping to embroider a simple horse motif in the hunter orange squares to complete her quilt.
Adult Living:  Students are trying to make an awareness for the less fortunate.  Please remember that Broc Mueller and Brody Kresak are having a clothing drive. They are requesting slightly used clothing, coats, mittens etc...a donation box is located at both school sites and will be available at the home sporting events. 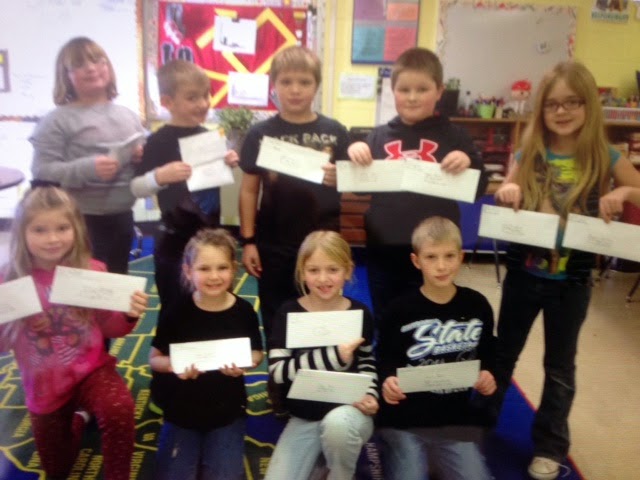 Second graders at Exeter-Milligan Public Schools started a unit on friendly letters as a part of their writing curriculum. In this unit, students learned the different parts of friendly letter and how to address envelopes. To practice this new concept, students have been assigned pen pals, children in Friend Public School’s second grade. This unit helps students hone writing skills, practice the five parts of a friendly letter writing, and become acquainted with another student. The pen pals will exchange letters back and forth for the remainder of the school year, or if they wish, they may continue writing to their new pals. To culminate this unit, the Exeter-Milligan students plan to invite their pen pals to join them for a special day later this spring.