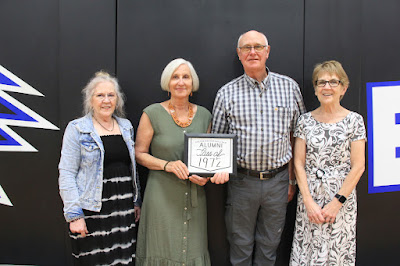 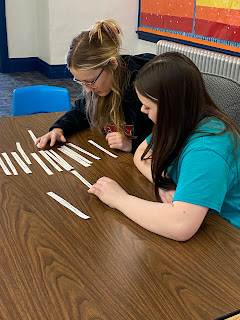 Kaydence Hasse and Alivia Luzum put events in American history in chronological order to review what has been covered this semester.

Mr. Brian Murphy's classes at Exeter-Milligan have had a busy semester of learning. This semester, eighth grade American History has been building up to the Civil War to finish the year. In Geography, we have moved outside of North America to cover the other continents of the world. American History has covered the Great Depression, World War II, Cold War, Civil RIghts, and will finish with an overview of modern American history.

Below - Logan Krupicka (back to camera), Tucker Svec (presenting), and Brett Kallhoff (sitting) prepared and presented a President's Day slideshow to share with their eighth grade class. 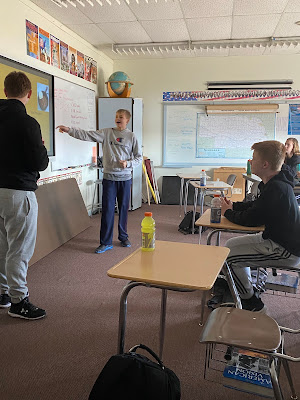 The Exeter Aquatic Center will be offering Swimming Lessons during the weeks of July 9 - 13, and 16-20.  The cost is $25 per child and you need to call the Aquatic Center to reserve a spot for your child.

“There’s only one place left that I want to go,

WHO SAYS YOU CAN’T GO HOME!”

This was the message the Exeter Area Community Foundation and the Exeter-Milligan School Foundation expressed to the 2022 graduates at Exeter-Milligan.  Each graduate received a personalized mailbox, reminding them that they will always have a home at Exeter-Milligan and are always part of the pack.  It may not be on the graduates radar now, but in five or ten years, when they have a family of their own and are looking for a place to raise that family, the hope is that little voice will be telling them, “Who says you can’t go home!”

The Exeter-Milligan school board held their regularly scheduled meeting at 8 pm on Wednesday, June 15 in Milligan.

After approving the consensus agenda the board opened the floor for public comment. Although there were no comments board member Allen Vavra explained that he had a request from a patron to move the comment period to after the discussion items.

After  a brief discussion Chairman Adam Erdkamp responded, “I don’t know that it is productive to have public comment after the discussion,” after clarifying that the public could not take part in the discussion portion of the board meeting.

The board moved on to discussion items which included the possible sports/activity coop opportunities with Friend.  Erdkamp noted that the coaches had met on May 13 and the area subcommittee met on May 16 (including members from EM and Friend).  Superintendent Paul Sheffield noted that a subcommittee of the coaches from both districts will present at the board meeting in July.

Erdkamp explained that the purpose of the area subcommittee meeting with Friend was to discuss the current cooperative activities.  “We talked about what we are doing now and how those things are going and also talked about if we are interested in other activities.”

Although Erdkamp mentioned they were interested in looking at more cooperative activities, specifically spring sports for next year, he understood that the coaches might not be ready for that yet.  They will meet again on June 26th.

Board member Eric Milton asked if there were extra copies of the enrollment numbers to share and Superintendent Paul Sheffield passed the paperwork out to the audience.  This included enrollment numbers for both districts and also projected participation in activities if the schools combined.  Sheffield commented that the students in both districts had been surveyed about activity participation.

The board held a brief discussion on the budget and some of the legislation that is affecting the budget.

Next month the board will have a scheduled training with the school lawyers before the regular board meeting.  Erdkamp noted that they also plan to talk to the lawyers about how the Milligan site could be used.

The last item on the agenda was the cell tower lease. The cell tower is located in a corner of the Exeter site football field.  The lease renews every five years and the provider wants to change to a 40 year lease.

Sheffield reported that the school lawyers have advised against a 40 year lease. The tower is actual just a repeater and breaks down frequently.

Under policy updates, Sheffield reminded the board that the policies have been updated to meet legal standards except the profession growth policy.  A chart was removed in that policy so that it could be altered separately as needed.

The board voted to change substitute teacher pay from $120 a day to $150 for a full day.  Sheffield remarked that most other conference schools have increased their substitute pay scale.

Sheffield gave a brief update on the playground project in Exeter.  He reported that  in digging out the gravel they found an old building foundation.  Board members speculated it could have been the old kindergarten building.

The next Exeter-Milligan school board meeting will be July 13 at 8 p.m. in Exeter. 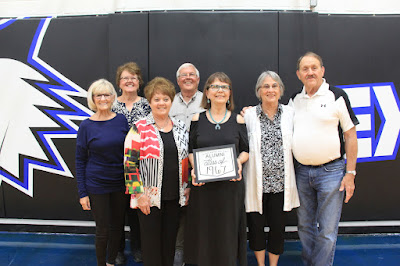 Exeter High School class of 1967 are pictured front row from the left: Nancy Tauriella, Gayla Wellman Drake, Elaine Pracheil Nielsen, Mary Tieso Stuhmer and Jerry Volkmer.  Back row from the left are Elaine Krejdl Oldehoeft and Kenny Krasser.
Posted by Leesa Bartu at 7:30 AM No comments: