The final score of 56-22 doesn't truly reflect the battle that went down in Milligan Friday night.  It was a David versus Goliath battle when it came to size and experience.
Giltner, with almost half of their team at over 200 pounds, and more than half of the team upperclassmen, left the Timberwolves on an uphill climb.

The Hornets got on the board with 8:11 left in the first quarter when #13 Alex Goracke threw a pass to #5 Rees Lyon who streaked down the field.

The conversion attempt was a pass out of bounds.

Exeter-Milligan's Trevor Luzum took the kick-off into the end zone but it was called back due to a block in the back around the Timberwolves 30 yard line.

With a minute left in the first quarter Giltner passed another one into the end zone making a pitch work for the two points.

In the second quarter it was Giltner again with a 70 yard pass to make the score 20-0 and a quick conversion to bring it to 22-0.

Giltner marched the ball down the field and at the 8 yard line on first down they fumbled with E-M recovering. The Timberwolves moved the ball and on fourth and one in punt formation they faked the punt and Luzum took the snap for the first down.

Hornet Tucker Gartner stripped the ball from quarterback Spencer Pribyl but then Giltner turned around and fumbled their first snap with Cameron White recovering the ball.

The Hornets came back to score again with 9:22 left in the 3rd while the conversion pass was batted down by White.

Rece Vaught completed a pass to Trevor Sok for another six on the board with 4:53 left in the third quarter and Colton Bossaller broke up the conversion pass.

With 1:26 left in the third quarter Evan True caught a Spencer Pribyl pass for a Timberwolf touchdown with Pribyl keeping the ball to make the two points.  Score was 34-14.

Giltner marches down the field again during the fourth quarter to make the score 42-14 but the Timberwolves came back with a Pribyl pass to Trever Zelenka who was brought down at the three yard line.  Bossaller punched the touchdown ball in with 3:03 left in the quarter and Manning carried the ball in to bring the score to 42-22.

Trevor Linden caught a Giltner pass to bring the score to 48-22 with a failed conversion attempt.  A Timberwolf fumble gave Giltner six more points plus conversion bringing the final to 56-22.

The Timberwolves travel to Lawrence-Nelson next week. 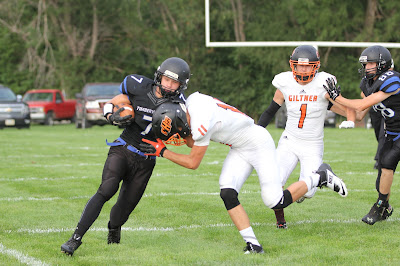 Exeter-Milligan’s Trevor Luzum tries to cut around Giltner players #11 Josh Hinrichs, and #1 Trevor Sok to gain some yardage for the Timberwolves. 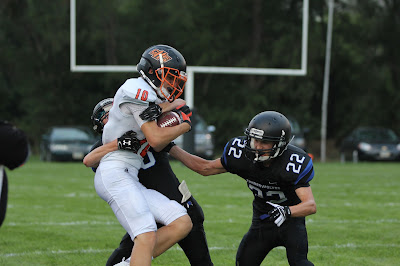 Giltner’s #10 Josh Hinrichs has no chance of getting anywhere when he encounters #48 Cameron White and #22 Mitchell Manning. 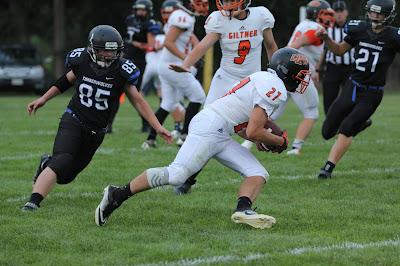 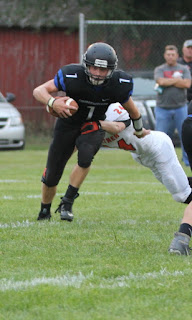 #1 Colton Bossaller tries to power through a tackle from Giltern's Dayne Hinrichs. 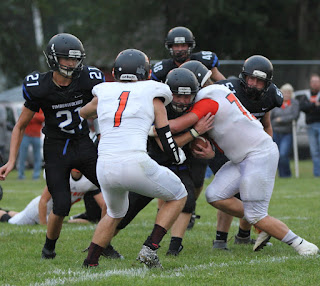 #1 Colton Bossaller carries the ball through the Giltner players #1 Trevor Sok and #76 Tucker Gartner with Timberwolves #21 Spencer Pribyl and #51 Johnny Babula and #48 Cameron White looking to make some room for Bossaller. 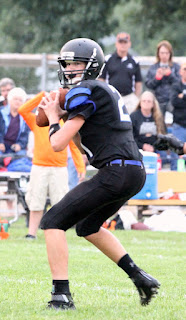 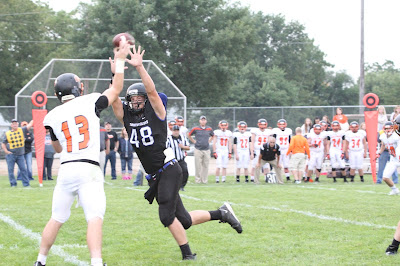 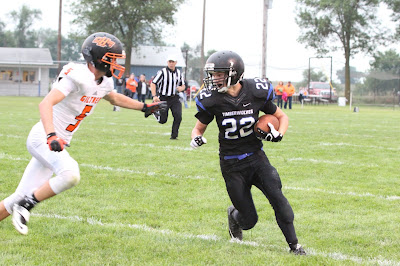 #22 Mitchell Manning finds a way around Giltner’s #5 Reese Lyon for some ground. 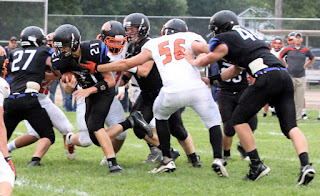 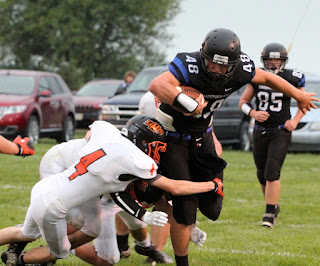 Posted by Leesa Bartu at 1:44 PM No comments:

Timberwolves gear up for season openers

The Fillmore Central/Exeter-Milligan Softball Team won their home opener 15-7 on Tuesday against Fairbury.  They will host a tournament in Geneva on Saturday.

The Timberwolf football team will host the Giltner Hornets on Friday at 7 p.m. in Milligan.  Don't forget the Booster Tailgate!

The Timberwolf volleyball team will defend their State Championship title this weekend in exhibition play at the state fair and will have their home opener on Tuesday, September 6 against Giltner and Osceola in a Tri starting at 5:30 in Milligan.

Go Timberwolves!
Posted by Leesa Bartu at 7:30 AM No comments: 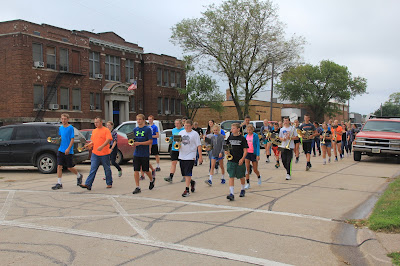 The Exeter-Milligan band could be heard marching the blocks around the school this week as they prepare for their performance at the Nebraska State Fair on Monday. 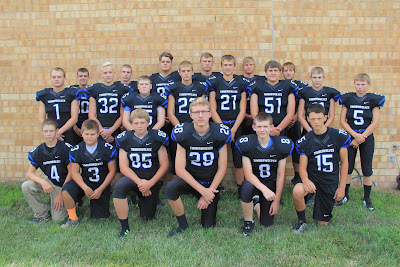 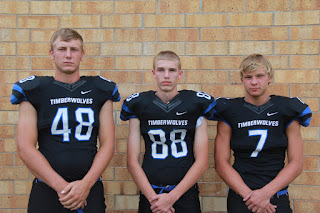 Exeter-Milligan Seniors on the football team from the left are Cameron White, Evan True and Trevor Luzum.
Posted by Leesa Bartu at 7:30 AM No comments: