Exeter native, Jordyn Brandt, was chosen to perform flute with the 2016 Nebraska Intercollegiate Honor Band, at the Nebraska State Bandmasters Convention, on March 4.  The top musicians from all of Nebraska's colleges are selected to perform at the convention each year.  The students rehearsed at UNL on Thursday and Friday and performed a concert in the Kimball Recital Hall on Friday evening.  The band  was directed by Dr. Travis Cross, professor of music at UCLA.  Brandt is a Freshman music and art major at Hastings College, where she is a member of the marching band, pep band, symphonic band, wind ensemble, and entertainment arts ensemble.  She also holds the second flute position with the Hastings Symphony. 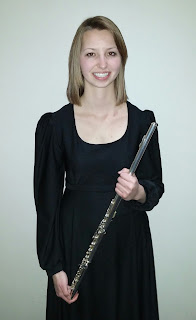 
Fillmore County Development Corporation is working with Hanna:Keelan Associates to do a County-Wide Housing Study. One of the components of the Housing Study is do a Household Survey to determine both present and future housing needs during the next five years.
The following is the website where citizens of Fillmore County are invited and encouraged to fill out a “Household Survey”  To go to the survey click here  The on-line survey can be answered on line in about 10-15 minutes and needs to be completed by April 1st.

The housing study is funded with a Housing Grant provided by the Nebraska Investment Finance Authority, with matching funds from the Fillmore County Development Corporation who received a grant from the Mary F. Tous Charitable Foundation.

It is important to get a good return on the survey.  An updated Housing Study gives communities and the county the ability to apply for funding for Down Payment Assistance and Owner/Occupied Rehab grants which have been used quite extensively the last five years.  The study is expected to be completed in August.

Questions may be directed to Patt Lentfer at lentfer.fcdc@genevamail.com or 402-759-41-910


At their meeting on Wednesday, March 2nd the Exeter Village Board immediately launched into a discussion of summer employee wages after briefly reviewing their regular business.

In February the board approved the aquatic center and maintenance hires including Jackie Luzum as the pool manager, Sara Lincoln to teach swimming lessons and as an assistant pool manager.  They also hired Erica Yound as an assistant manager and lifeguard.   Returning lifeguards hired were Ashley Benorden, Bailee Stueben, Tara Mueller, and Katie Mounce.  Filling out the summer aquatic center roster were Sydney Hall, Katherine White and Sophia Frook.

The board hired Dalton Zelenka and Broc Mueller as summer maintenance help.  The board set wages for all of the pool and maintenance employees.

Demolition of the tag factory  was next on the agenda,  The board spent very little time discussing the options for paying for the demolition.  “ I guess as of right now we will have to borrow the money ,” predicted Chairman Alan Michl, “Does anybody have any other ideas on how to pay for it?”

Chief of Police Mark McFarland was present at the meeting and was asked about dealing with some of the junk cars in town.  When a specific home was asked about McFarland commented that the person in question had been notified by certified letter and once the letter is accepted by the person they will have five days before the department would call a tow truck to remove the cars.

Michl noted that some properties in town need to be identified with McFarland for clean-up.
The board approved the lot split for the Kahlandt and Due properties on Exeter Avenue.

With spring approaching the board set May 14th the date that the dumpster would be available at the city shop from 8 a.m. to 2 p.m. or until the dumpster is full.

Moving on to Maintenance Supervisor John Mueller’s report the first issue was tarring of the streets.  The board concluded that they would stick to the schedule and continue to streets as the budget allowed. The board approved another $5000 for tarring the streets.

Also on the maintenance report were bids for the two abandoned wells in town.  The well just north of the railroad tracks would cost $3303.75 to abandon.  The older well, next to the water tower could be abandoned at a cost of $2790.  Both estimates were just to close up the wells and did not include removing the old structures.

The board also discussed purchasing a new trailer for the mini excavator as the one they are currently using is not heavy enough.

Exeter-Milligan Superintendent Paul Sheffield reported on the progress of the Joint Project.  “Most of the sheetrock is done and the windows will be in by the end of the week.  The front entry is just waiting on flooring for completion.”

One issue that has emerged is with the sprinklers in the gym ceiling.  They estimate they will have to add $100,000 to the budget to do some work to the ceiling of the gym in order to properly place the gym ceiling.

The next board meeting will be held on April 5 at 7 p.m. 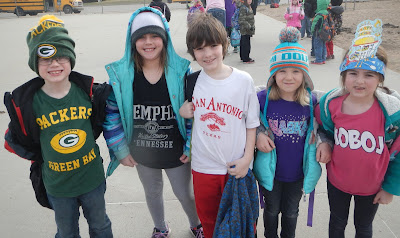 Exeter-Milligan students celebrated Read Across America during the first week of March.  Each day they had a special celebration and designated dress up days.  Since March 2nd is Dr. Seuss’s birthday they honored his legacy by mimicking some of his books each day.  On Monday it was “Fox in Socks” day and they wore crazy socks.  On Tuesday, they recognized the book “Green Eggs and Ham” and everyone was encouraged to wear green all day.  On Wednesday it was “Oh, the Places You’ll Go” day.  Participants were a shirt from that broadcasted a vacation spot.  The last day of school for the week was Thursday and it time to wear a hat for what else but “Cat in a Hat.”

Above– And look at the places they have been.  From the left, Brett Kallhoff, Alexis Saatmann, Jonah Geiger, Cheyenne Krupicka and Kaylie Schlueter all show their vacation themed shirts for “Oh, the Places You’ll Go” day at Exeter-Milligan elementary school.

Below – First graders at Exeter-Milligan, along with their teacher Mrs. Sharon Lott, all mimicked “Cat in a Hat” and wore a hat to school.  Pictured from the left are:  Adrien Mueller, R.J. Clevenger, Brooklyn Oldehoeft, Sydney Engert, Cheyenne Krupicka, Sharon Lott, Kaylie Schlueter, Truman Milton and Logan Johnson. 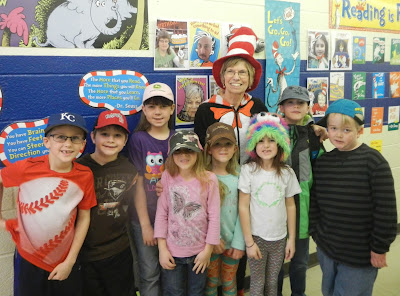 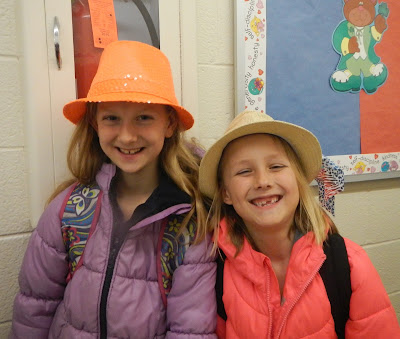 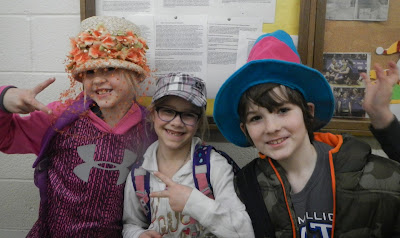 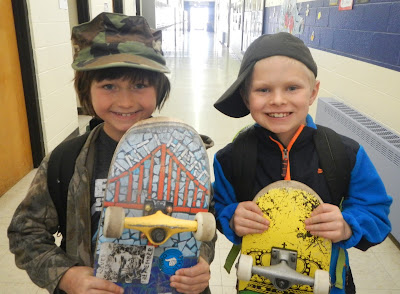 Sportin’ their boards and the skateboarding style for “Cat in the Hat” day are Carver Kanode (left) and Avery Nichols.
Posted by Leesa Bartu at 7:30 AM No comments: