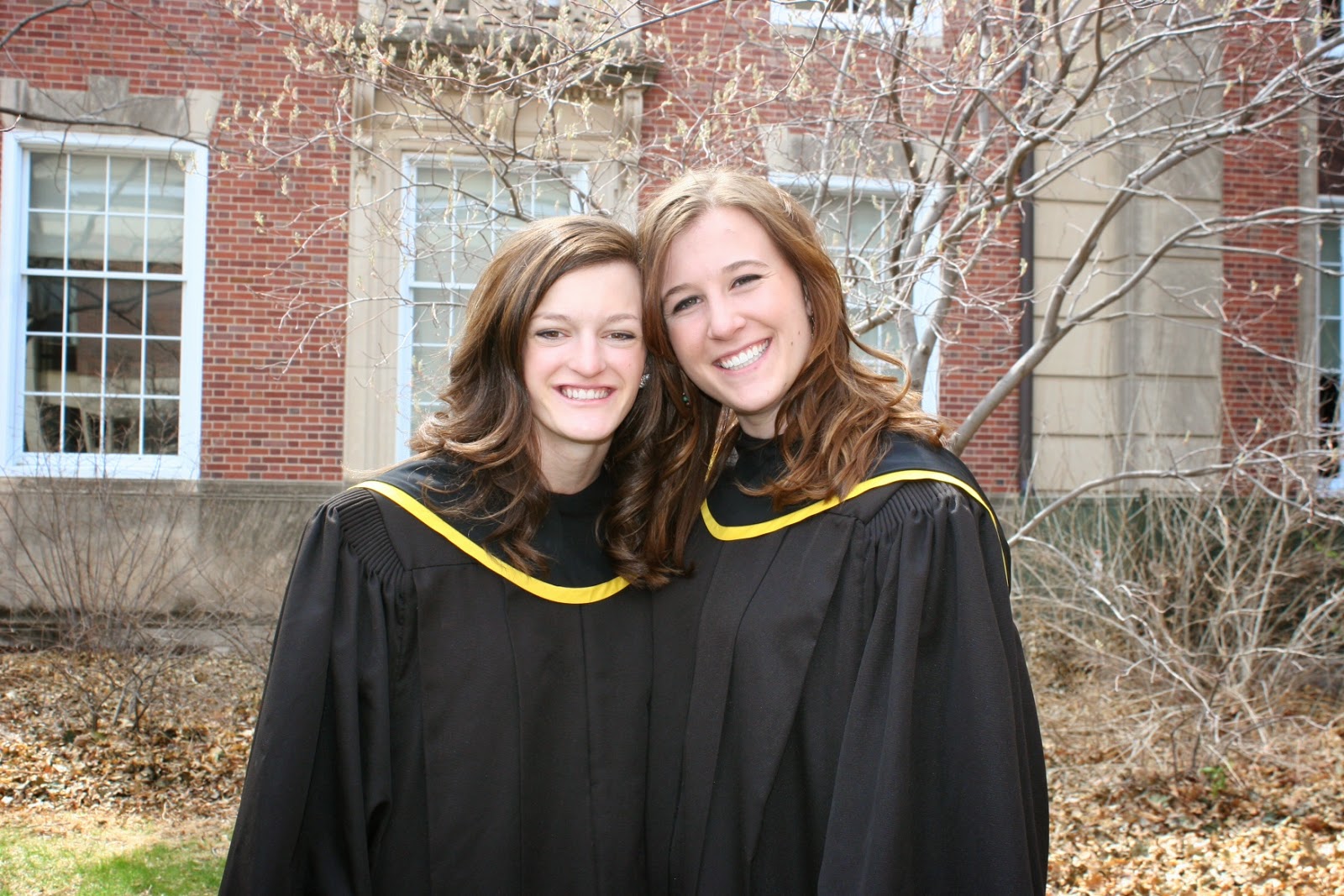 Our congratulations to Exeter-Milligan graduate Kelsey Moore, (right) daughter of Brent and Lori Moore, who was recently inducted into the Mortar Board Society along with Friend graduate Chelsea Kubicek, (left) daughter of Richard and Mary Kubicek.
Students, faculty and alumni will be honored by the University of Nebraska-Lincoln at its annual Ivy Day ceremonies on April 19.
The event, co-sponsored by Mortar Board and the Innocents Society, recognizes the outstanding contribution of students selected to serve in the two organizations, as well as the achievements of current members and notable underclassmen and seniors.
Ceremonies begin at 10 a.m. at the Nebraska Champions Club, 707 Stadium Drive, and conclude with the traditional planting of the ivy by the 2014-15 presidents of the societies, Andrew "AJ" Blazek for Mortar Board and Joe Farley for the Innocents Society. Both are from Omaha.
Mary B. Marcy, president of Dominican University in San Rafael, Calif., will give the keynote address. A UNL graduate and a native of Sheridan County, Marcy is a former president of the Black Masque Chapter of Mortar Board.
Honorary memberships in the Innocents Society will be presented to Donde Plowman, James Jr. and Susan Stuart Endowed Dean of the College of Business Administration; Susan Voss, student development and events director for the College of Agricultural Sciences and Natural Resources; and Andre Fortune, director of the Office of Academic Success and International Services, and the Jackie Gaughan Multicultural Center.
Honorary Mortar Board memberships will be presented to Bill Avery, Nebraska state senator; Tim Clare, Lincoln attorney and University of Nebraska regent; and Scott Winter, assistant professor of news-editorial in the College of Journalism and Mass Communications.
The Innocents Society inducts 13 new members each spring, with selection based on leadership, scholarship and service to the university and greater community. The Innocents Society was founded in 1903 to promote the spirit of the university and is the chancellor's senior honorary. It is not affiliated with any national organization.
New members of Mortar Board are tapped into the Black Masque Chapter each spring by Mortar Boarders wearing black masks and robes. The 28 new members were selected on the basis of outstanding scholarship, leadership and service to the university and community.
Posted by Leesa Bartu at 7:30 AM No comments:

Melvin Dean Motis was born to Frank Motis and Helen Kovanda Motis on June 17, 1939, at Exeter, and passed away on Tuesday, July 15, at Warren Memorial Hospital in Friend, at the age of 75 years.

Mel grew up in Exeter and graduated from Exeter Public High School in 1957. He married Carol Jean Hughes on April 23, 1966, and to them three sons were born; Mike, Doug and Jim.

Following graduation, Mel served in the US Army and competed on the Army Rifle team, before going to work for Burlington Northern Railroad. After a few years he came back to the family farm and continued to farm with his father, raising crops, hogs and cattle until 1984 when the farm economy began to struggle.

During this time Mel served for 8 years on the Exeter School board. With three growing boys to feed, Mel was forced to work off the farm at various jobs, including Volkmer Construction, Horizontal Boring and Jacques Seed. In 1988 Mel took a job with Boeing Aviation in Wichita, KS, and worked there until the death of his wife, Carol, in 1993. Mel moved back to the family farm and started M and M Tree Service, which he continued to operate until his health began to fail in 2004. Despite his failing physical strength, Melvin continued to help many neighbors and friends with field work in the spring, and with harvest in the fall. He came to love swathing hay for Jason Oldehoeft, and would never turn down an opportunity to mow hay, a beloved activity he continued until May of this year.

Throughout much of his life, Mel was known for his trap shooting skills, and spent many weekends and weeknights shooting with some of his closest friends. Family vacations often included the State Trap Shoot in Doniphan. Over the years, the mass of trophies, guns and other winnings were enough to fill a whole room. He spent many nights reloading shells after working all day, and would always make it to a shoot the next day, wherever it may be.

Mel was an avid hunter and wildlife lover. Many a time he could be found near his canary grass plot watching the pheasants fly in. Growing up he never missed a hunting season, and he passed that passion on to his three boys. Many winter days he could be found cruising the countryside with all three boys in the truck, looking for pheasant, rabbit or quail. For a little sporting fun, he would even take the boys on an occasional coyote hunt on Sundays, despite missing church services.

Mel was also a devoted sports fan, many Saturdays were spent watching college football with his grandsons, but he was especially proud to watch his grand kids in all their sporting events never missing a chance to attend a football, softball, basketball game or wrestling match.

You could always find Mel at an auction, coin sale, having coffee, or just putting around in the “silver bullet” he refused to quit driving. He spent a lot of time at his grandkids’ trap shoots, all of which followed in their granddad’s footsteps, taking up an interest in the sport.

He loved the Fillmore County Fair hog show, and you could find him sitting somewhere in the stands. He enjoyed watching his grandkids show their pigs, and he would never miss one of their shows, regardless of what else needed to be done. He had the best seat in the house this year having passed on the day of the Fillmore County Fair hog show. He was watching from above as they drove several pigs to champion honors.

In his retirement, Mel found a love of cooking and canning, specializing in pickles, pork and beans, and jaternice, which he was proud to share with family and friends. He spent many hours playing pitch, poker, or any game of chance, and enjoyed riding along on any road trip with the boys, whatever the activity or destination.

Over the years Mel met many people that he was blessed to know, a source of great pride for him. Wherever he went someone knew him.

Mel will be remembered for being just a little bit stubborn and stuck in his ways, maybe a little too quick to complain. But he always said, “If you don’t tell someone what they are doing wrong, they won’t get better.”

He is survived by sons, Mike and Brenda, Geneva; Doug and Lori, Exeter; and Jim and Natalie, Geneva; grandsons, Thane, Preston, Colton, Wyatt, Trevian, and Gatlin; granddaughters, Caroline and Toni; brother, Ernest; sister-in-law, Betty Motis; aunt, Clarabelle Smith; and many nieces and nephews.
Posted by Leesa Bartu at 7:30 AM No comments: 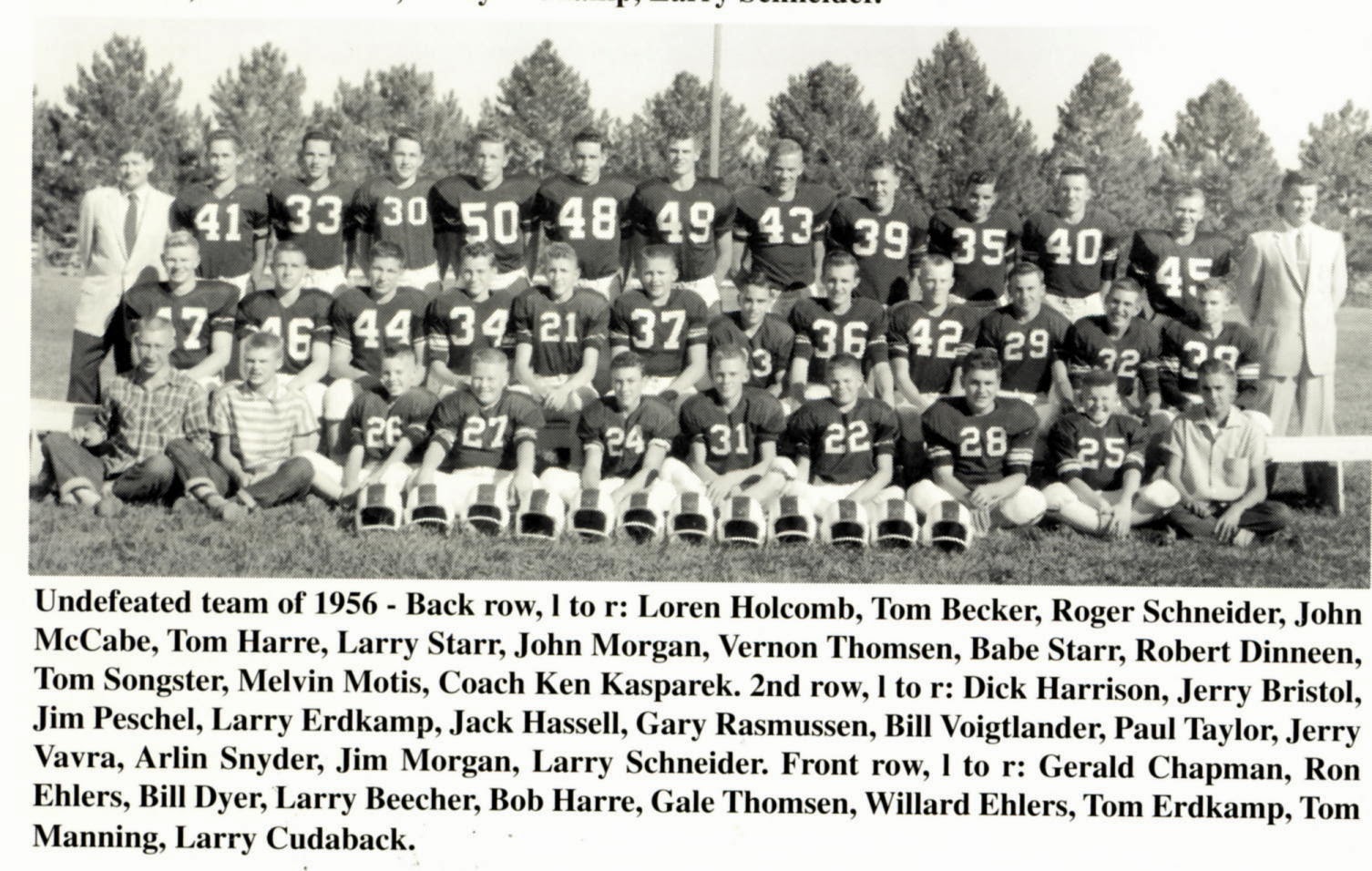 Funeral services for Mel will be held on Friday, July 18, 2014 at 2:00 p.m. at the United Church of Christ in Exeter. Pastor Kenn Leischner will officiate the services.
Following the funeral services, Mel will be cremated and interred at a later date in the Exeter Cemetery.
Visitation will be held on Thursday, from 1:00 p.m. to 8:00 p.m., with family greeting friends from 6:00 p.m. to 8:00 p.m. at the Farmer & Son Funeral Home in Geneva.
Memorials are directed to the family to be designated at a later date.
Posted by Leesa Bartu at 12:34 PM No comments: 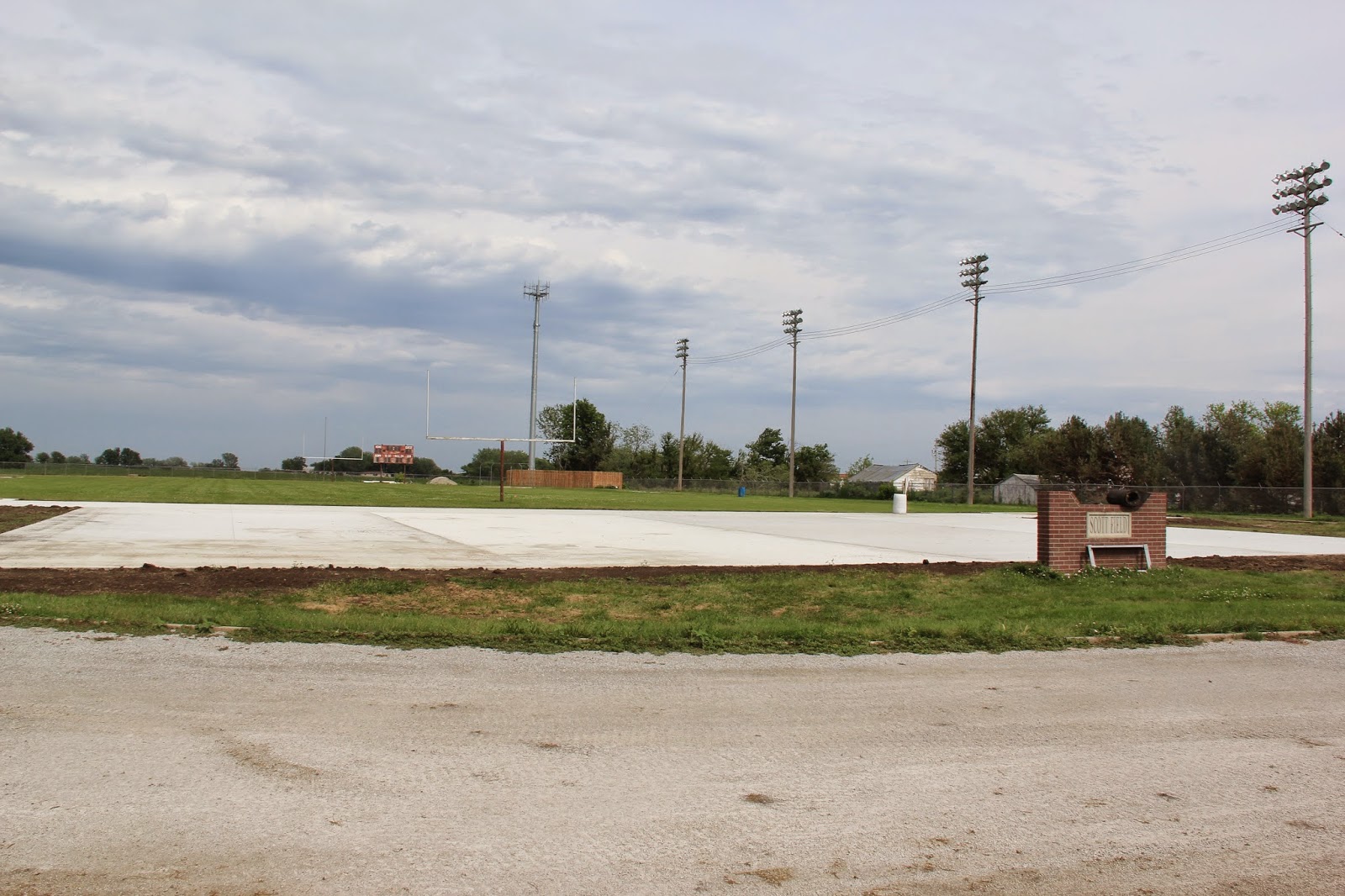 The cement is poured but will have to cure for 28 days before the asphalt can be applied for the running surfaces. 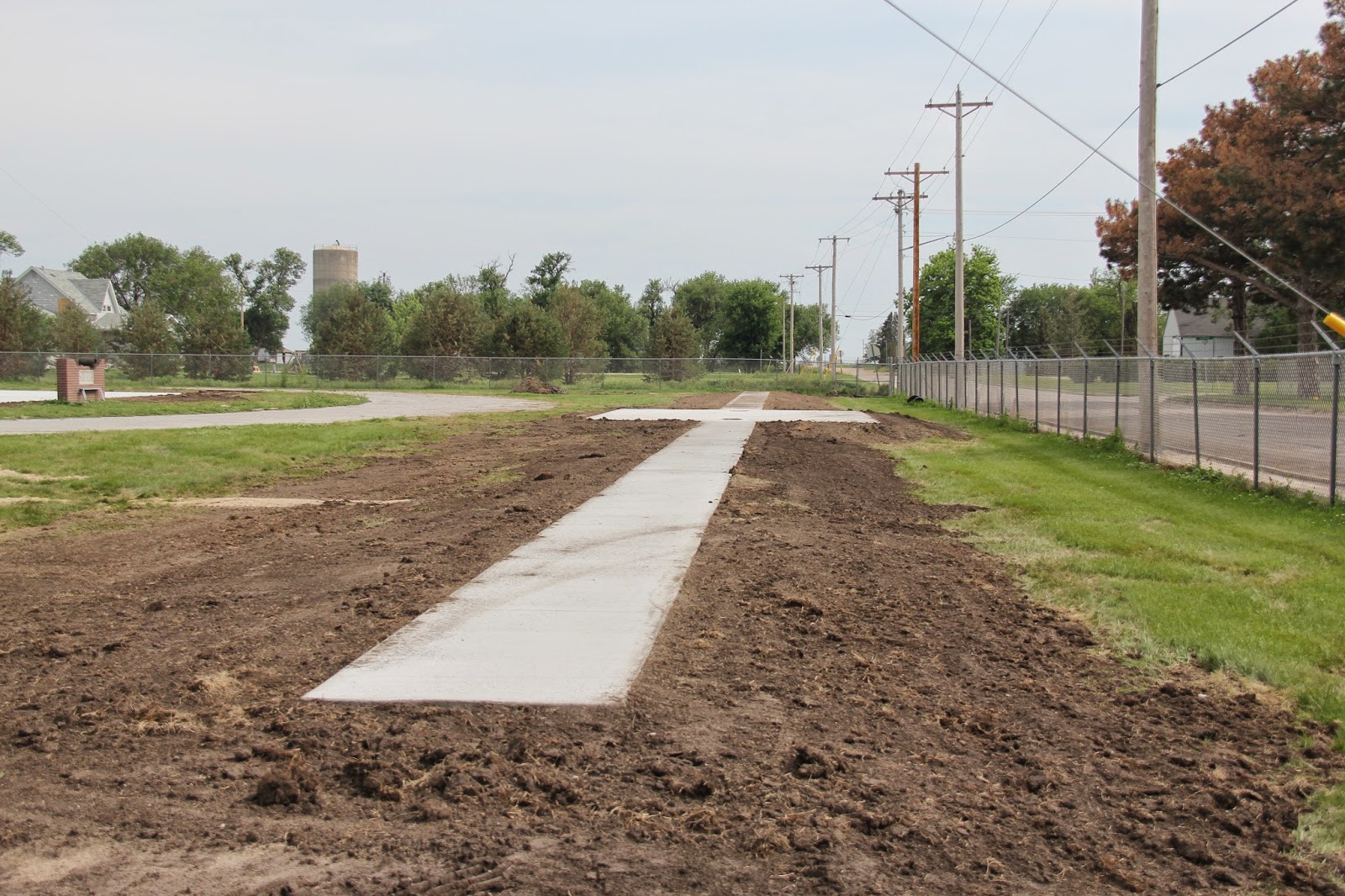 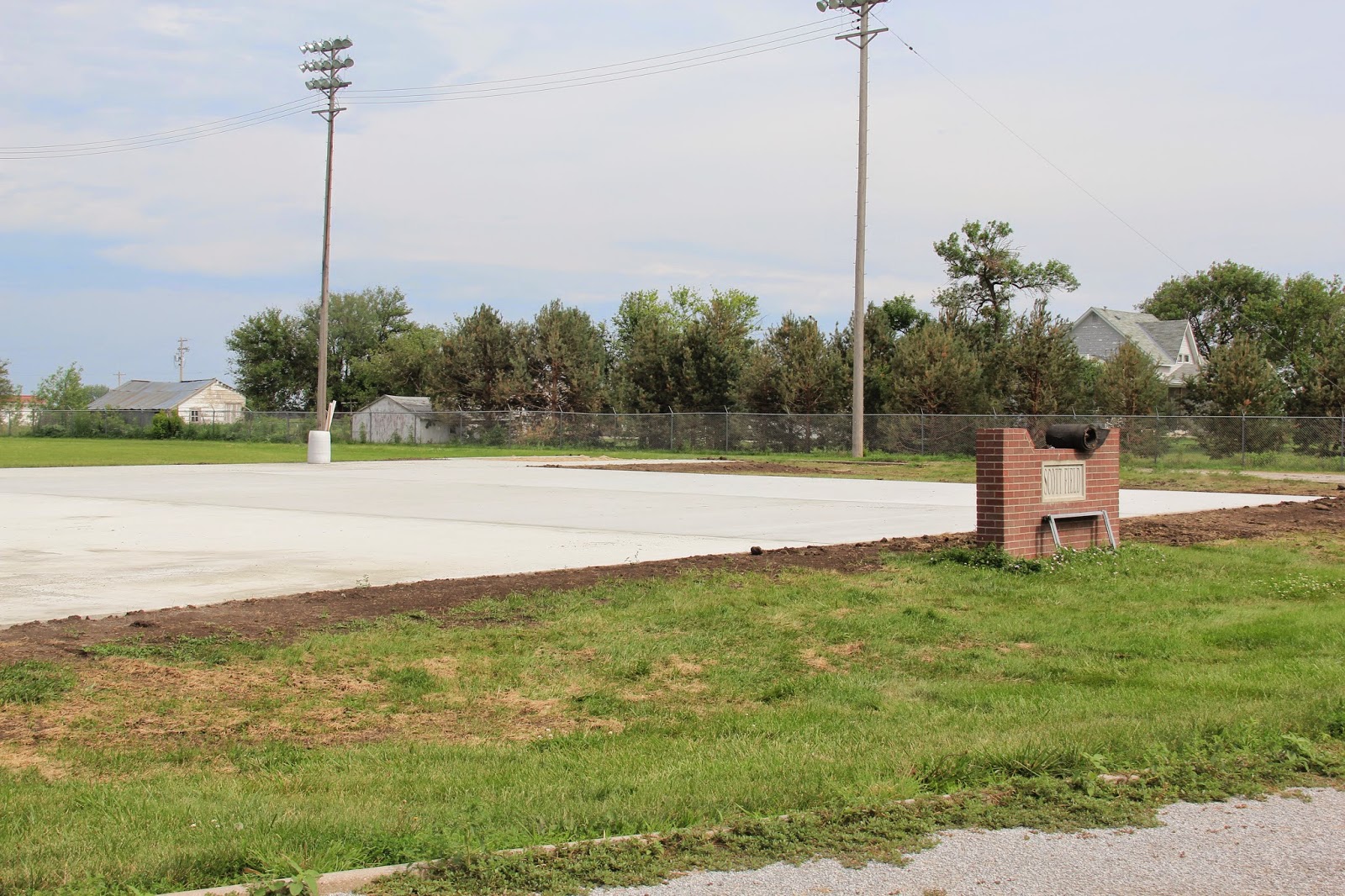 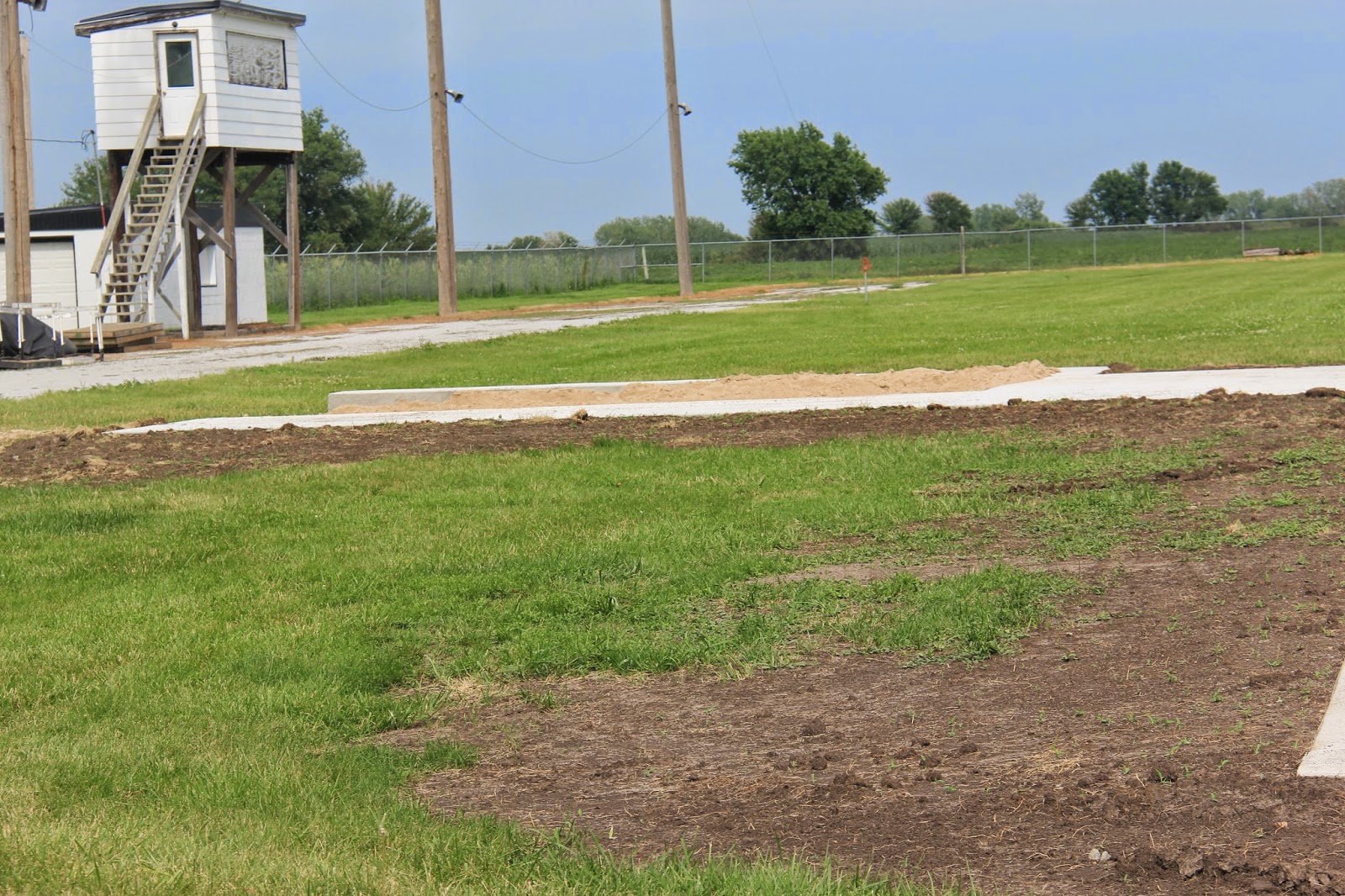 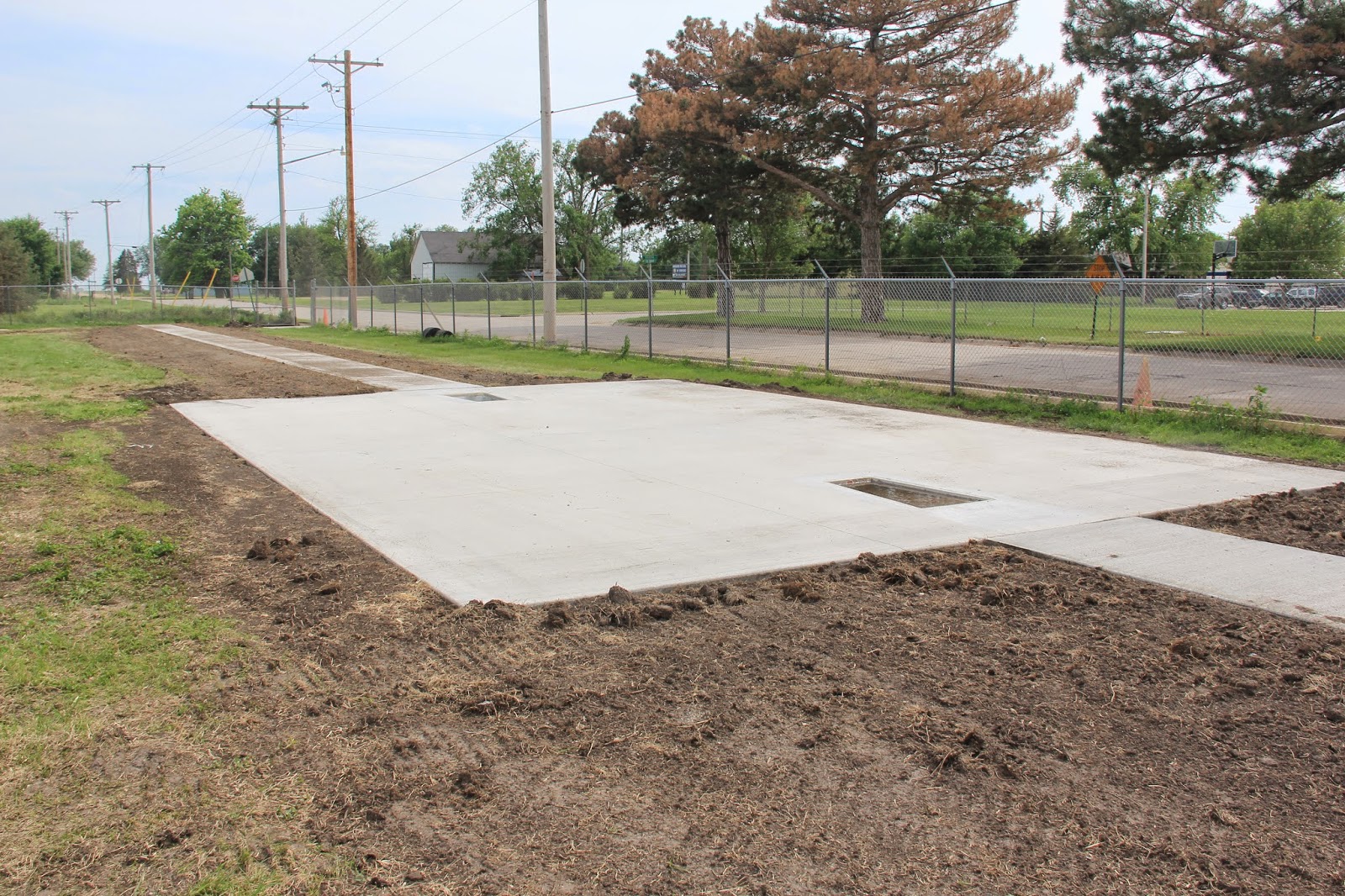