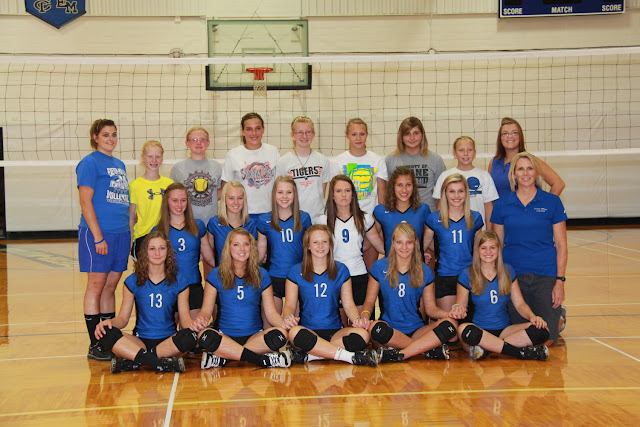 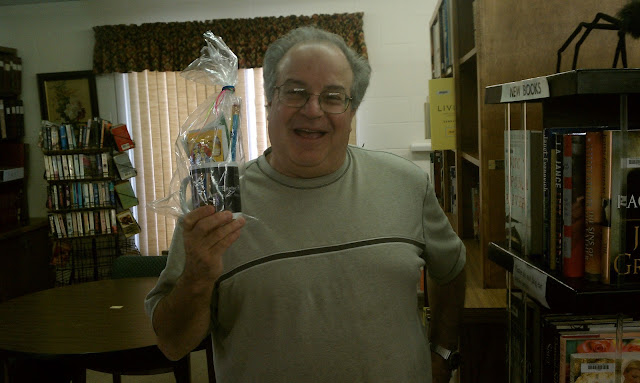 Bob Mahoney with his Exeter Public Library Patron Appreciation prize. The library had a drawing of current and new patrons for a prize that included an Exeter Public Library mug, a gift certificate to Greg's Market, a notepad, candy, and other goodies. Congratulations Bob!
Posted by Leesa Bartu at 8:00 AM No comments: 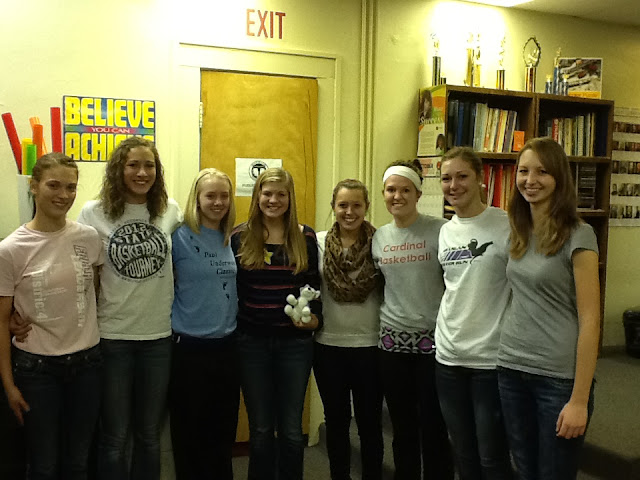 DVDs:
The Incredibles
A Bug’s Life
Beverly Hills Chihuahua 2
Chronicles of Narnia: The Lion, the Witch and the Wardrobe
Snow Dogs
Posted by Leesa Bartu at 10:31 AM No comments:

If you are interested click here for the stats on the Howells Dodge meeting.
Posted by Leesa Bartu at 12:20 PM No comments: 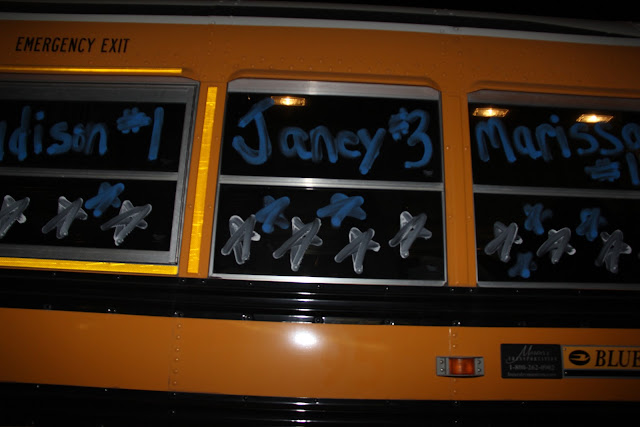 The bus was all decked out for the ride to Grand Island. 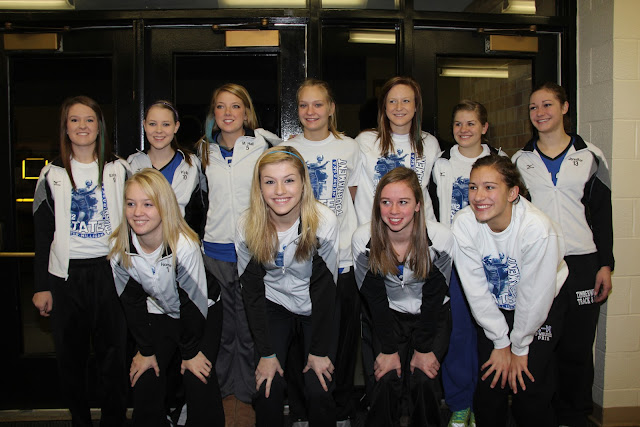 All ready to eat some fresh jaguar this morning. 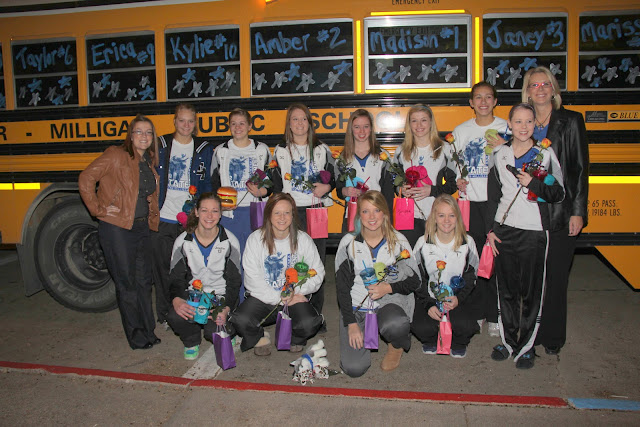 Joined by their coaches, ready to leave. 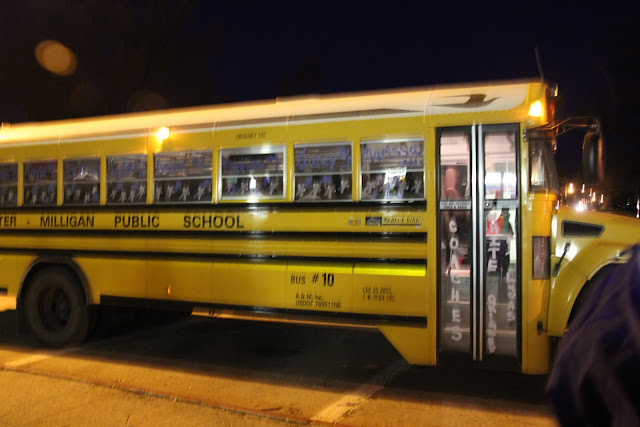 The decked out bus with Coach White driving. Go TIMBERWOLVES!!!!

Here is a great article about the Timberwolves victory.  The Timberwolves will meet  Bruning Davenport Shickley on Monday, November 12th in BRUNING at 6:30 p.m.
Posted by Leesa Bartu at 9:10 AM No comments:

Exeter-Milligan Timberwolves  are headed to the State Tournament in Grand Island for a  9 a.m Thursday match at Grand Island Central Catholic.
The Timberwolves, with a record of 27-4, will meet the Howells/Dodge Bobcats who are 28-3.
Been there done that, let's do it again!  In 2009 and 2010 the Timberwolves defeated Howells to win the titles.
KAWL 104.9 will be covering the State Volleyball game on Thursday morning.
Posted by Leesa Bartu at 7:30 AM No comments:

For Boobs Only Fundraiser held in Friend 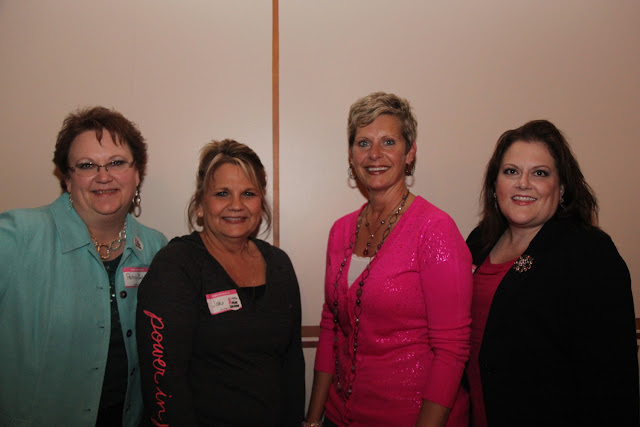 Some of the Breast Cancer Survivors posed for a picture at the end of the For Boobs Only event.  From the left are Patrice Ruhl, of Exeter, Jodie, Lisa Hopken, of Geneva, Lenna Weber, of Friend. 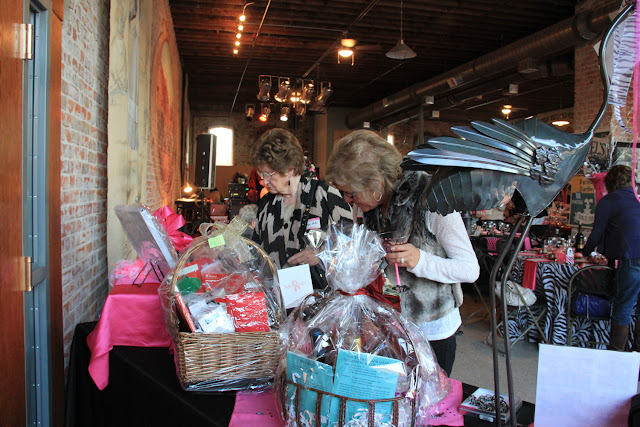 Some of the women check out the many beautiful baskets and other items that were donated for the auction at For Boobs Only. 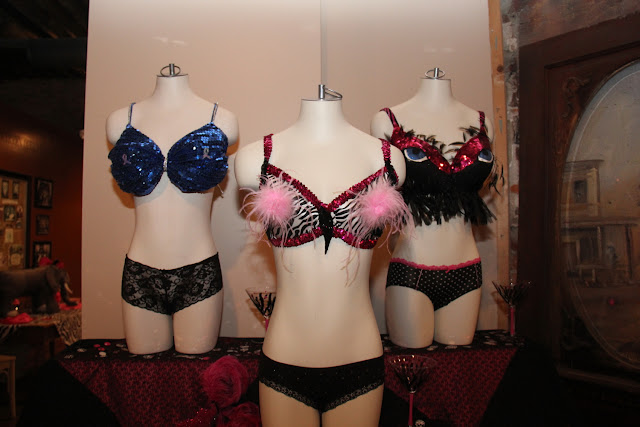 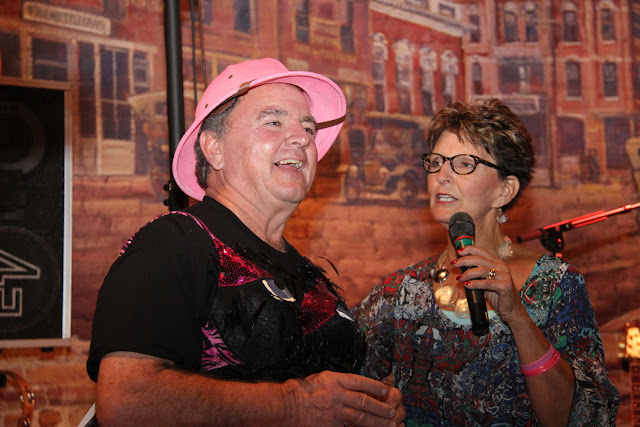 Bob Becker models one of the bra’s his wife created for the For Boobs Only event while Linda Underwood describes the piece before auctioning it off to the highest bidder to raise funds for Breast Cancer research.


Three years ago a group of women in Fillmore County decided they wanted to do something about breast cancer, some were breast cancer survivors, but all had been affected by the disease and so, For Boobs Only was born.

This year’s breast cancer research fundraising event was held at the Pour House in Friend on Friday, October 26th.  The evening began with a cocktail hour which included live entertainment by “Class Act.”  Dinner (catered by Hunter’s Lounge) was served by waiters who are well known male members of the county who volunteer their time during the evening.

Each year the committee splits the funds raised, with part going to the Susan G. Komen foundation and the other part going to the American Cancer Society for breast cancer research.  The first year $9069.95 was raised, last year 16,033.00 was raised and this year’s total is at least $22,000 but all of the numbers haven’t been finalized yet.

So far the event has been sold out all three years before it could be advertised.  “A lot of the sponsors have been with us for all three years and the area banks have been very generous,” said committee member Lisa Hopken who also serves as the spokesperson for the group.

Throughout the evening there were several opportunities for attendees to donate to the cause.  The live auction with Exeter auctioneer Linda Underwood doubled as entertainment for the crowd.  Every year the auction has concluded with the offering of bra’s which have been transformed into works of art by committee member Pat Becker.  Each year Becker creates a new bra to add to the collection and each year, those who “won” the bra the year before bring it back so that it can be auctioned again.

Part of the fun of the bra auction are the models, husbands and friends of the committee members.  This year each of the bra’s sold for over $100. Other auction items included themed baskets, paintings, a weekend at a condo in Colorado, and an evening in Burress (which sold for the highest amount).

Special hand painted martini glasses were created for the event by Corky’s Canvas and Urban Legends both of Lincoln. They were used to serve pink martini’s and then sold at the end of the evening.
This year was the first time that attendees could purchase t-shirts.  The first two years the waiters all had t-shirts and when they added additional waiters this year they needed more shirts, “the shirts were so cute we ended up selling them,” explained Hopken.

One of the most popular items to purchase was the “Socks or Rocks” boxes.  Donors could purchase a box and it could have a pair of socks in it or a piece of jewelry.  The boxes were opened after the meal and sure enough, a rock (piece of jewelry donated by York Jewelry) was found.

The all metal flower planter “Implant Girl” was made available by Tuttle, Inc. and 100% of the cost was donated to the fundraiser. They are still available for $75 each by contacting Becker at pbecker@tuttleinc.com .

Hopken emphasized, “We are having a good time.  We are passionate about this, the committee wants to be light hearted. . .we don’t want to be negative, but be fighters.”

“We know what you may go through if you get breast cancer.  The committee wanted a way to raise some extra money to help find a cure or at least make it easier to go through having breast cancer,” explained Hopken.  “It makes us proud to know that people are willing to give. The committee was so thankful for the many sponsors who helped the night be a success.”

Suzi Bettger is the coordinator of the event and she and Hopken along with Becker, Joni Ewalt, Jill Hammer, Shirley Krause, Connie Reinsch and Jean Underwood serve on the committee.

Wine sponsors were Kopsa Otte and Cornerstone Bank with linens and tableware sponsored by Geneva State Bank.  The San Carlos Room Rental was sponsored by Geneva Engineering.  The Welcome Center Rental was sponsored by Citizens State Bank of Friend and Bank of Friend. The table decorations were donated by Blue Blossom Floral, programs were designed and printed by Sherri Rohrig of Picture This Photography and other sponsors were York State Bank, Horizontal Boring, First National Bank of Exeter and Crete True Value.