Nov 12 at 3 p.m. the Exeter Public Library is having a program on Winter Birdwatching. This fun and informative presentation by Joyce Votipka is for anyone, whether you're an expert watcher or just starting.

One Book, One Nebraska: Nebraska Presence: An Anthology of Poetry has been chosen as the 2018 One Book One Nebraska selection. We have it, so come check it out!
(Fun fact: the poetry of Amy Plettner, a relative of both your librarian and our dear friend Hugh Wilson, is included in this publication!)
Posted by Leesa Bartu at 7:30 AM No comments:

Reta Mae (Harre) Coffey was born to John & Theresa (Leif) Harre on May 10, 1923 at the home on a farm northeast of Exeter. She went to her eternal rest in Heaven on October 29, 2017 at the age of 94 years, 5 months, and 19 days. She had resided at Heritage Crossings Nursing Home for the past 3 years. She was the oldest of 15 children, and she lived her whole life in Exeter.

Reta Mae attended Country School and made her first communion at St. Stephen’s Catholic Church. She graduated from Exeter High School in 1940.

She spent many hours in the kitchen cooking fantastic meals and making everyone happy. She had a very strong faith and loved the Blessed Mary and the Rosary, which she recited daily.

A Rosary for Reta Mae was held on Thursday, November 2, 2017 at 10:00 a.m. followed by a Funeral Mass at 10:30 a.m. at the St. Stephen’s Catholic Church in Exeter, Nebraska. Father Steve Thomlison officiated the services. Agnes Anderson accompanied Jessica Ruhl who sang “Be Not Afraid,” “Mother Dear, O’ Pray For Me,” “I Am The Bread Of Life,” “Ave Maria,” and “On This Day, O’ Beautiful Mother.” 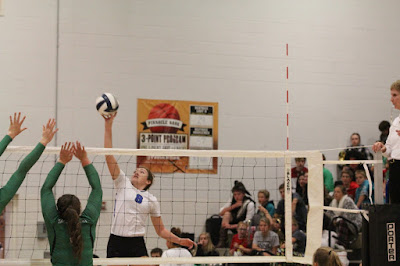 Hannah Beethe puts one over the net against Falls City Sacred Heart. 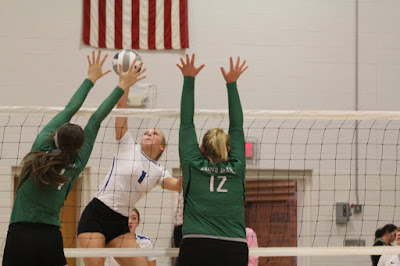 Katherine White sends the ball flying to the FCSH side in the three game sweep at Beatrice High School. 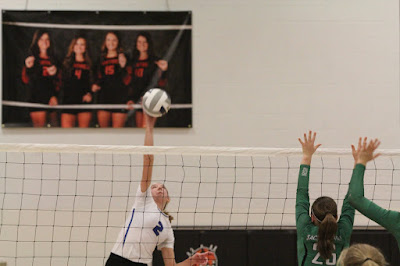 Above and Below: Kate Jansky was hot at the net on Thursday night for the Timberwolves. 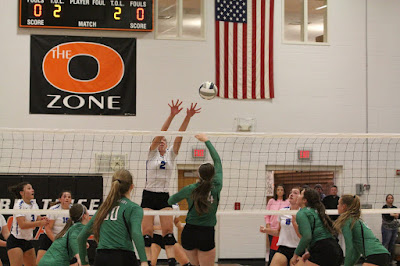 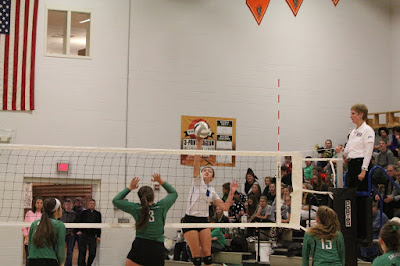 Hannah sends it back over the net. 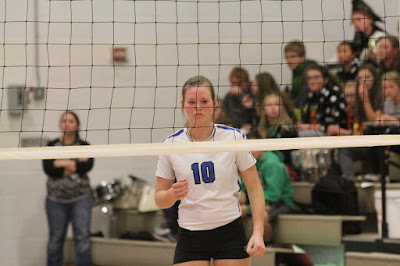 Daisy Kanode is ready for action on the court. 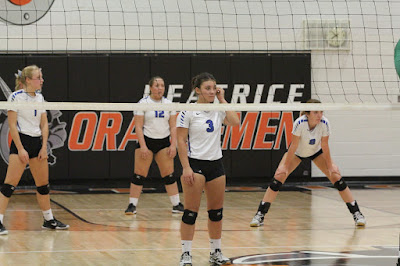 KK, Katie, Anna and Hannah are ready for a FCSH serve. 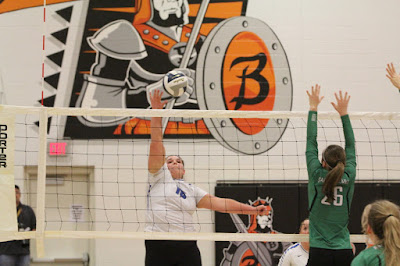 Tara Mueller connects with the ball for a kill. 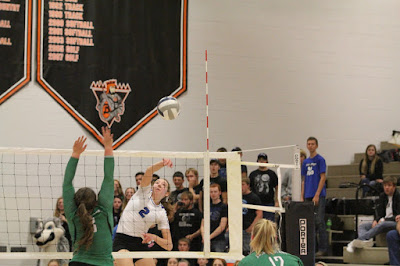 Kate slips one by the FCSH hands. 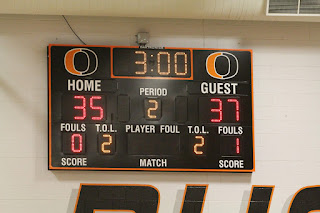 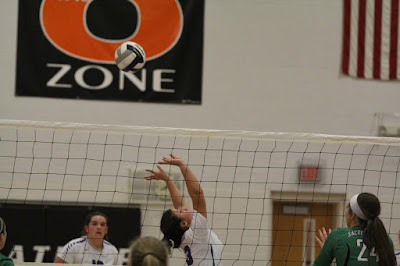 Anna Sluka sets the ball behind her.
Posted by Leesa Bartu at 1:27 PM No comments: 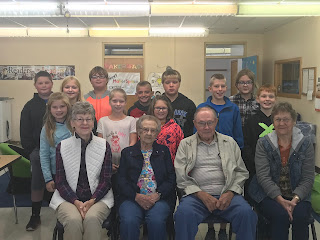 On October 16th, Beth Vavra helped the fifth grade class host a breakfast with the senior citizens on our Telecare list.  For Telecare, the students take turns each week making phone calls every morning to see if they need anything.  The students were able to serve juice and donuts and were also able talk to them about their experiences in school. 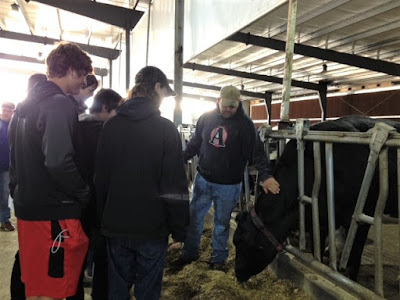 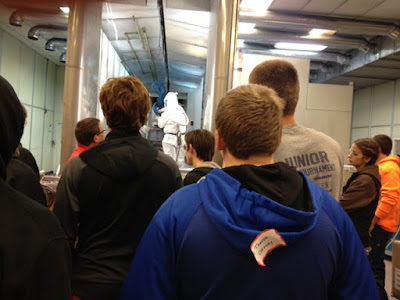 Three tracks were developed so students had a choice and could decide what area interested them the most.  The tracks were Agriculture and Technical Sciences, Health and Human Services, and Business, Marketing, & Management.

The goal of the day was to expose students to some of the career opportunities in Fillmore County.   The FCDC wanted to expose students to all aspects of a business that they would not see from the outside. The tours allowed the Fillmore County juniors to hear comments about employment opportunities and training requirements from people in the business. Twenty businesses hosted the tours with 30+ presenters.

A comment was made by one of the students as to what was your favorite part of the day? “Getting to tour Metal Tech Partners and seeing how that business works.  Another student said, “My favorite part was seeing the dairy and the technology used nowadays in that industry.

“It was great to have the cooperation from the businesses and the three county schools to set up the Career Industry Day,” according to Patt Lentfer, FCDC Director.  “I had a great committee that worked for several months to make the day successful by contacting businesses, setting up the tours, and arranging lunch.“ 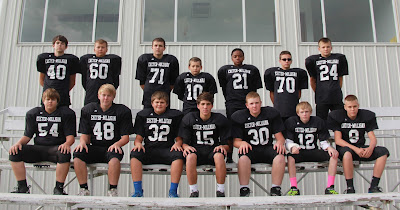 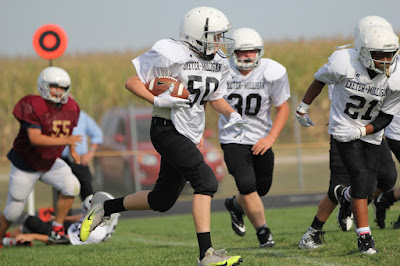 Above -Cooper Girmus (50) follows Jack Baptista (21) in their game against East Butler.  Also pictured is E-M-F player Casey Underwood (30)
Below  – Christian Weber (15) lets a pass fly in their win over East Butler. 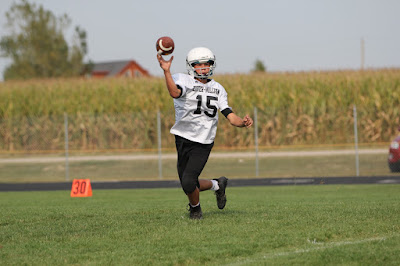 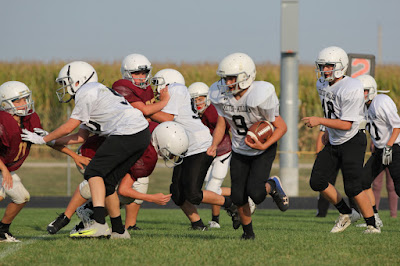 Story by Brian Murphy
The Exeter-Milligan-Friend junior high football team recently completed the 2017 season with a 3-3 record. The team played against good competition throughout the season.

EMF opened the season traveling to Diller on September 5. After opening up a 28-6 halftime lead, EMF finished with a 34-20 victory over Diller-Odell. Christian Weber scored touchdowns on runs of 1, 2, and 14 yards. Weber hit Chase Svehla on a 16 yard TD. Jack Baptista ran 31 yards for a TD. Two point conversion passes were from Weber to Svehla and to Cooper Girmus. Defensively, Marcus Krupicka recovered a fumble.

After a week off, Meridian came to Milligan on September 25. EMF opened up a 32-0 lead after three quarters, en route to a 32-18 win. Christian Weber scored TDs on runs of 9, 15, and 18 yards. In addition, he found the end zone on a 71 yard punt return. Parker Lofing and Casey Underwood ran in conversions and Weber hit Chase Svehla for a third.  On defense, EMF scored when Peyton Pribyl tackled a Meridian runner in the end zone for a safety. Lofling, Underwood, and Kole Svec had fumble recoveries.

On October 2, EMF traveled to Henderson to play Heartland. EMF was unable to score in the first half. In the second half, EMF scored on touchdown runs of 13 and 53 yards by Daysan Staskal and a 46 yard run by Christian Weber. Staskal also returned a kick-off  53 yards for a TD. Conversion passes were Weber to Peyton Pribyl and Staskal to Chase Svehla. Parker Lofing also ran a conversion in. Staskal had a fumble recovery for the EMF defense.

It was a cold, windy Monday, October 9 in Milligan when Cross County visited. Cross County went home with a 58-8 win over EMF. Christian Weber scored EMFs only TD on a 45 yard run. Weber hit Chase Svehla for a conversion pass. Braden Capek and Casey Underwood recovered fumbles for EMF.

To end the season, EMF traveled to Osceola to play High Plains/Osceola. After the first quarter, EMF was up 14-8. The game remained tight through the third quarter, with High Plains/Osceola up 30-22. In the fourth, EMF could not find the end zone and ended up on the short end of a 50-22 score. Christian Weber was involved in all the EMF scoring. He ran 18 and 29 yards for scores. Also, he hit Cooper Girmus, who made a diving catch for a 12 yard TD reception. Weber and Girmus connected for a conversion and Weber ran one in.

This was the fourth year for the two schools to team up at the junior high level on the gridiron. Over the four seasons, EMF junior high football has compiled a 13-10 record. Brian Murphy, Jay Hitchcock, and Treven Cerveny coached this season’s team of 17 players.