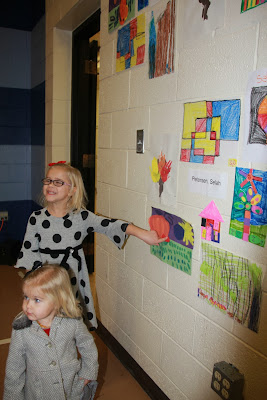 Before the Exeter-Milligan Christmas Program on Tuesday, December 3rd parents were invited by their children to view their art in the small gym.  Art teacher Mrs. Tyler Hinton has been working with all of the grades this year and the students were proud to display their latest pieces.  Kindergartener Selah Petersen shows her mom, Allison Petersen (not pictured) and her little sister Hannah her artwork.
Posted by Leesa Bartu at 7:30 AM No comments: 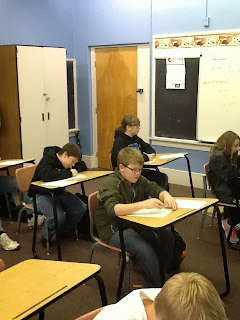 Mr. Jackson Krejci's Math 7 students at Exeter-Milligan are working hard on their Math 7 Test.  During this chapter the students worked on solving one and two step equations along with finding the Area and Perimeter of Rectangles.   Pictured:  Theron Odvody (front), James Becker, Macy Due and Kate Jansky.
Posted by Leesa Bartu at 7:30 AM No comments: 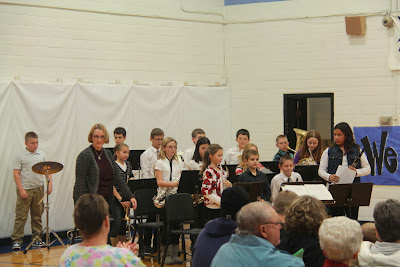 The Exeter-Milligan Fifth and Sixth Grade Band performed several numbers at the concert. 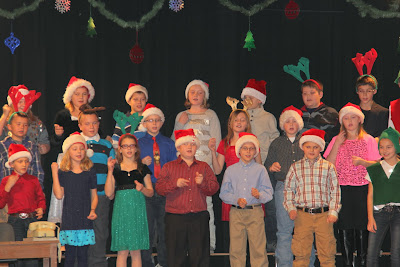 The Third, Fourth, Fifth and Sixth Grade classes as they perform the final song in "Mrs. Claus to the Rescue."

It’s three days before Christmas and while the elves are busy, Santa is not.  In fact Santa isn’t doing anything but rest.  He’s come down with something awful and the doctor has sent him to bed.

And so the stage is set for Exeter-Milligan’s Christmas Program, “Mrs. Claus to the Rescue.”

The kindergarten through sixth graders entertained a full gymnasium with their performance of the musical.

After a brief intercession the musical begins starring all of the sixth graders. This year Caitlin Murphy was the lead as Mrs. Santa.  Several of the students played multiple roles including Kayla Geiger as Elf, and FranTastik and Eli Johnson who played an Elf, Delivery Person and Morey News.  In addition to elf duties Caleb Horne played the director and Jacy Schlueter played the doctor and an elf.

During the program the third, fourth and fifth graders were on stage with the elves performing numbers like “Christmas Blues,” “Cheer Up, Santa” and “Christmas Won’t be Christmas.”

The news media is informed of the Santa’s illness and sends a camera crew to interview Santa and Mrs. Claus who reports that there won’t be toy deliveries that year.  After attempting to get the post office and other delivery services to help with the toy deliver Mrs. Claus briefly gives up on making Christmas work without Santa.

Along with the elves, she finally realizes that she is the one who plans Santa’s trip each year, she knows how to drive the sleigh and she can make the deliveries.  Everyone celebrates as Mrs. Claus returns home successfully and Santa wakes up from his resting to discover he has slept through Christmas but it has been taken care of by Mrs. Claus.

Also, this season the library is looking for individuals to make a paper snowflake and bring them in to share at the library on the bulletin board.  Bring yours by Monday, Wednesday and Friday 8 - noon, 1 - 5 and Saturday 9 - noon.
Posted by Leesa Bartu at 9:04 PM No comments:

The Exeter Chamber of Commerce invited Santa to come and visit with kids in the area on Tuesday, December 3rd before their holiday music program.  Santa gave each visitor a candy bar after hearing their wishes and posing for photos. 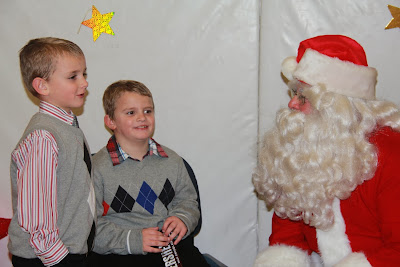 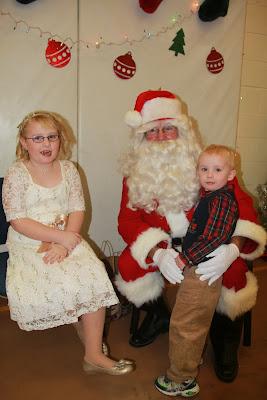 Amarah Carr and her brother Preston chat with Santa for a moment. 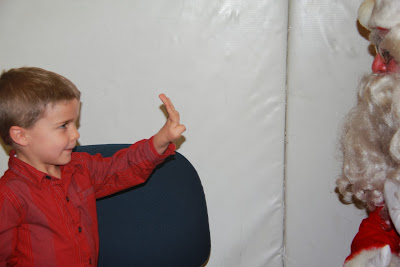 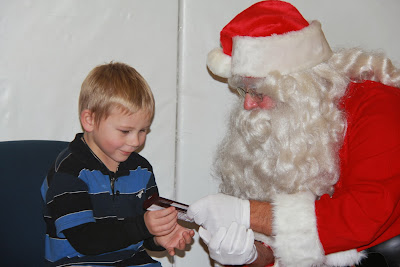 Draven Rose shares his wishes with Santa and is pretty excited when Santa presents him with a candy bar. 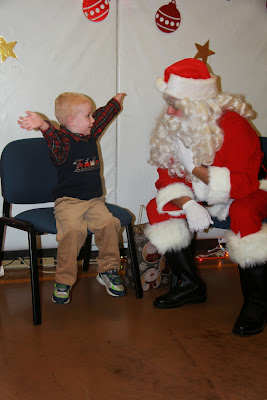 Preston Carr tells Santa about something big that he has on his Christmas list. 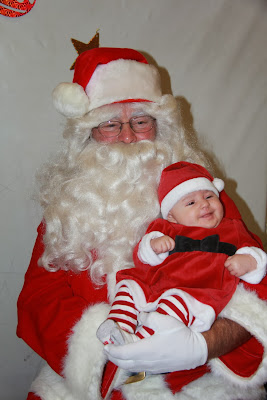 Little Avery Hankins dressed up special just for Santa while she was visiting her grandparents, Craig and Kelly True of Exeter.
Posted by Leesa Bartu at 7:30 AM No comments: