The Fillmore County Development Corporation annual meeting will take place on Wednesday, February 16th beginning at noon at the VFW Hall in Geneva.
Speaker for the event will be Larry Johnson, President of the Nebraska Trucking Association. Mr. Johnson says there are tons of things going on with trucking and a hot topic right now is inland ports. His presentation promises to be informative. Since nearly everything is on a truck at some point before it gets to the consumer the topic will be of interest to everyone.
For reservations or more information call the Fillmore County Development Corporation office at 759-4910 or email lentfer.fcdc@genevamail.com.
Posted by Leesa Bartu at 10:11 AM No comments: 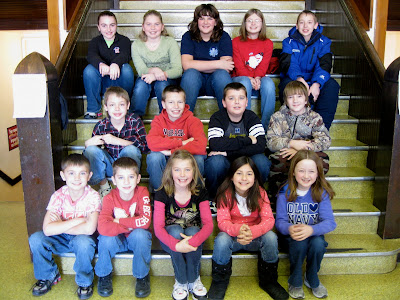 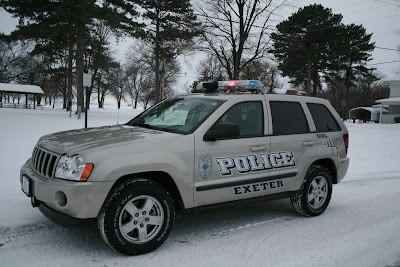 This is what you don't want to see in your rear view mirror. The Village of Exeter recently purchased a new police vehicle and Saturday it saw it's first hours of service.
The vehicle, a 2007 Jeep Grand Cherokee Laredo Edition, was purchased from Erdkamp Motors in Exeter.  The old vehicle was traded in on the new purchase.
Village Board members chose the vehicle specifically because it has four-wheel drive along with a back seat and a storage area behind.
The vehicle was purchased with funds set aside specifically for a police car in the village budget.  Unfortunately, some of the old radio equipment would not fit in the new vehicle however grant money was found to purchase the new equipment.
Village Marshal Mark McFarland and Brian McFarland have been working on converting the equipment from the old vehicle to the new vehicle. The decals were put in place on the car on Thursday, and after curing on Friday the car was ready for service on Saturday just in time for more snow and ice.
Posted by Leesa Bartu at 6:11 AM No comments: 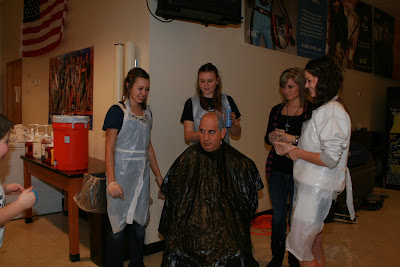 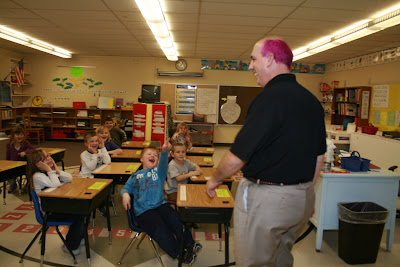 Mr. Sheffield shows off his new look to the Kindergarten class and gets a big reaction from Chase Vnoucek. 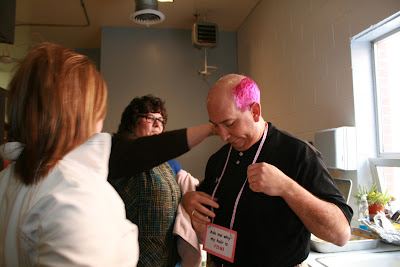 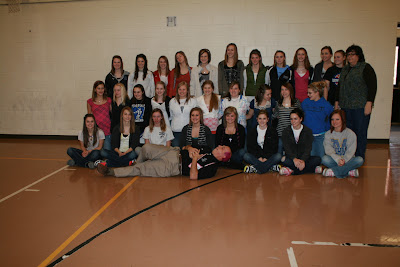 Mr. Sheffield poses with all of the Exeter-Milligan members of the FCCLA.
Sticking to his promise, Exeter-Milligan Superintendent Paul Sheffield spent his lunch hour with the FCCLA members dyeing his hair pink.
To raise funds and awareness for the Susan G. Komen Foundation, Sheffield promised to sport the magenta look if the group raised over $400.00 during their recent fundraising efforts.
According to FCCLA advisor Mary Lou Vossler the group raised "$848.00 from our events.  We raised $353 from the Pink Out raffle, $81 during the shot for a pop and $175 with cookie sales."
Adding to the total were the staff members who donate to wear jeans on Fridays and chose to contribute their Denim Days' collection to the pot.
Last year the FCCLA group raised around $400 for their pink event including the cake raffle they held which they had not planned for this year.  Sheffield volunteered to contribute some motivation.  "Besides raising funds I just wanted to get the kids involved.  I wanted to step it up and my sister double-dog dared me.  She shared a clipping of a principal in another state who put in pink hair extensions and challenged me to beat that."
It wasn't clear if students donated more or community members and parents, "There was a concerted effort and they were all in cahoots to see me with pink hair for the rest of the month," commented Sheffield.
During the transformation Sheffield endured many comments from the student body.  Junior Brady Bristol made sure Sheffield knew "I bought like 1,000 cookies to make sure this happened."
Sheffield plans to keep the 'do for the rest of the month as promised and is wearing a sign around his neck that prompts those he encounters to ask him why his hair is pink.
Posted by Leesa Bartu at 5:34 PM No comments: 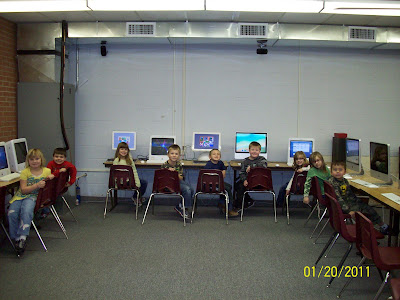 Exeter-Milligan Kindergarten Students take a break from computer classto smile for the camera. The students enjoy many differentweb sites to practice a wide variety of skills.