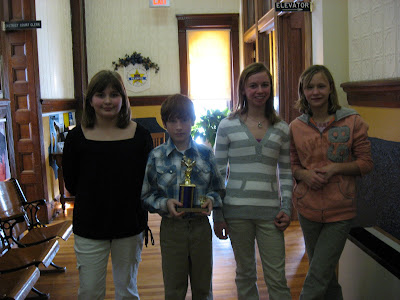 Four Exeter-Milligan Elementary students were chosen to represent Exeter-Milligan at the county spelling bee on February 11. They are pictured from the left Ashley Benorden, Elliot Erdkamp (holding his fourth place trophy), Janey Due and Hailey Luzum.
Posted by Leesa Bartu at 4:19 PM No comments: 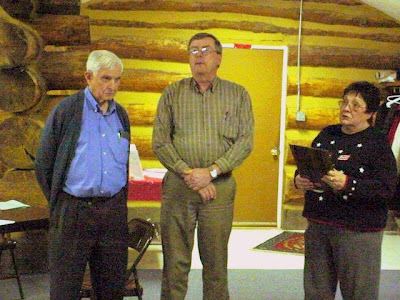 The Annual Meeting of the Fillmore County Development Corporation was held Thursday, February 11, 2010 at the Log Cabin, Geneva, Nebraska. “Deal Me In” was the theme of the open house that was held in conjunction with the Annual Meeting. Thirty people attended.

Don Jividen, President of the Fillmore County Development Corporation, presided over the business meeting. The minutes of the 2009 annual meeting were approved and the proposed 2010 budget was accepted. Jim Donovan-Geneva, Pat Hilty-Fairmont, Pat Rasmussen-Geneva, Mel Taylor-Milligan and Christin Lovegrove-Geneva were elected to serve on the FCDC Board of Directors. The Fillmore County Supervisors had appointed Dennis Kimbrough, to the FCDC Board as an ex-officio member. The guidelines were reviewed and Kimbrough will how serve as a full member of the Board

Don Jividen recognized and thanked investors. He also recognized the current board members. Patt Lentfer, FCDC Executive Director, told briefly about some of the activities and projects of the FCDC during 2009.

The late Cam Wilkins was honored for his leadership and contributions to the Fillmore County Development Corporation. Gary Dick and Pat Hilty presented a plaque to his father, Hugh Wilkins. Cam was a founding member of the Corporation, served as President, and was on the Housing and Recruitment Committees as well as other sub-committees.

The Fillmore County Development Corporation is a not-for-profit corporation that was formed in 1989 and is governed by a Board of Directors. The mission of the corporation is to enhance the quality of life for Fillmore county citizens by improving the economic health of Fillmore County and strengthening its communities. Membership is open to individuals, businesses, and government entities.

Posted by Leesa Bartu at 3:54 PM No comments: