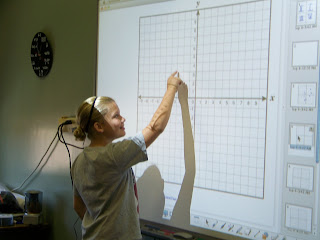 We are working Smarter!  Exeter-Milligan staff worked hard over the summer installing SmartBoards in nearly every classroom.  SmartBoards are tools which allow the students and teachers work interactively with the computer.  Pictured is 7th grader Lucy Murphy showing how to graph a point in Pre-Algebra class.

Posted by Leesa Bartu at 7:58 AM No comments: 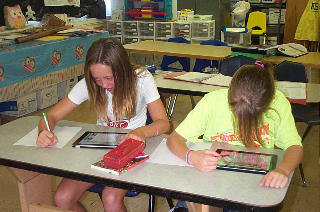 Mrs. Polak's reading class has done research on the country of Pakistan using the wireless iPads.  They went to several different sites and found information suggested by the reading materials, as well as other interesting facts they hadn't expected.  Here are Katie Mounce and Kelsey Bigelow hard at work.  The book they are reading in class is Iqbal by Francesco D'Adamo. 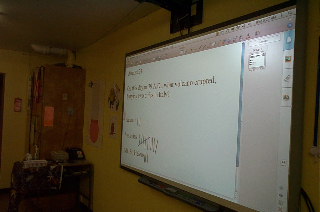 Mrs. Polak has been using the new technology available in the Milligan building in a variety of ways.  Every morning the 6th grade has a "Question of the Day".  They place their tally marks on the SmartBoard next to the answer they choose.  then they make fractions using those totals out of all participating. 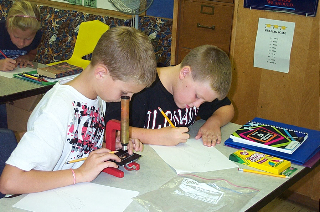 The fifth grade used the Magi-scopes to examine roots, stems, and leaves during their study of plants and plant parts.  Here we see Mitchell Manning and Theron Odvody working on a celery leaf that has veins colored red by soaking the whole stalk in red food coloring.  They can see that leaves have vascular tissues.
Posted by Leesa Bartu at 1:58 PM No comments: 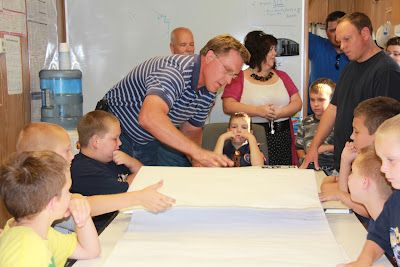 Cub Scouts from Pack 175 out of Fillmore Central and Pack 218 out of Exeter-Milligan take a look at the plans for the Fillmore County Replacement Hopsital with Sampson Construction Manager Jeff Grote. 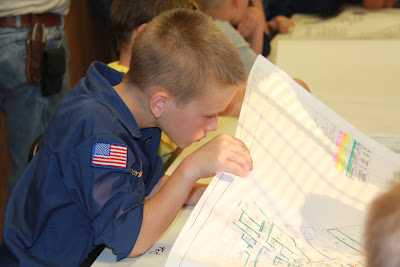 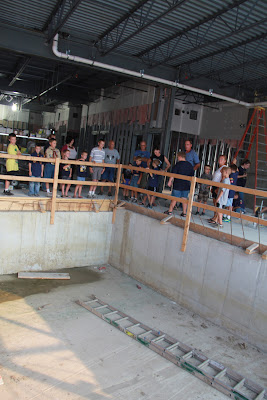 The Scouts favorite stop on the tour was the concrete pit where the aquatic therapy pool will be located when the funds are raised for the project. 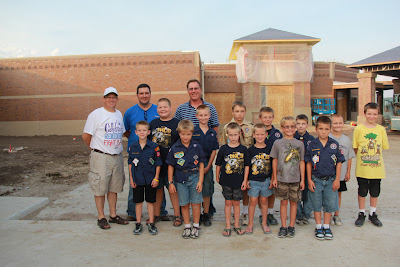 After the tour, the Cub Scouts from Pack 218 and Pack 175 stopped for a picture in front of the new hospital project. Also pictured in the pack row from the left are Paul Utemark, CEO of the Fillmore County Hospital, Jake Kulhanek, project manager and Jeff Grote, Construction Manager.
Someday Fillmore County Cub Scouts can tell their children they remember when the new hospital was built. Webelos Cub Scouts from Pack 175 out of Fillmore Central and Pack 218 out of Exeter-Milligan were treated to a special tour of the new Fillmore County Replacement Hospital recently.
The fourth and fifth graders were working on their Engineering Webelos pin.  Part of the process to earn the award was to tour a construction project and look at the plans with the architect or builder.
The Scouts started their tour in the Sampson Construction trailer with FC Hospital CEO Paul Utemark introducing Jeff Grote, the construction manager of the project.  Grote, originally from Shickley recalled his days as a Cub Scout and welcomed his fellow scouts.
To begin, the Scouts had the opportunity to look through the huge stacks of plans while Grote explained the extent of the different blueprints and how the different sub-contractors use the plans.  He also explained the advances in technology and how that has helped the construction business grow.
The Scouts learned how blueprints are now designed on computers and each of the construction managers carries a set of blue prints on a laptop so that they can answer questions even when they are away from the sight. The Scouts noticed the Helicopter pad on many of the different pages which helped them understand the correlation between the different sets of plans.
After asking a few questions the Scouts had the opportunity to hear from Jake Kulhanek, the project manager for the site.  Kulhanek explained, "You start small like you do with Lego's and then get bigger and bigger when designing a building like this."
Kulhanek described his job for the Scouts, "I order the materials and maintain communication between the different trades.  I have to have the materials here at just the right time and the right amount or Jeff won't like it. We don't want things here too early or we will have to find a spot to store them."
After learning about the jobs related to the construction site and viewing the many blueprints, the Scouts, their parents, and their hosts headed to the site.  The 60,000 square foot project will increase the size of the old facility by more than 20,000 square feet.
Part of the construction project was air conditioned, Grote explained, "We have half of the building air conditioned because we need to remove the moisture and maintain the constant temperature as we have begun to hang drywall in some of the areas."
Kulhanek added "We have a lot of materials like the drywall we do order early and let it sit inside the air conditioned areas to acclimate."
The most fascinating spot for the Scouts was the cement pit the project contained which will house the aqua therapy pool when the funds are raised for that addition. The campaign is underway to fund the pool but not complete yet so a spot had to be cemented in for it during construction so that dirt wasn't left exposed.
The Scouts got to see many of the walls were painted with notations of smoke walls and fire walls.  Grote explained, "We have had the fire marshal visit and we have to have the walls labeled so that the fire marshal will inspect those areas."
The group toured the entire new facility asking questions as they went.  Some of the ceilings and walls were in place but many of the mechanicals were still visible for the Scouts to see.  In the operating room Grote explained that the heavy beams in the ceiling "were for the lights that will run back and forth on the tracking."
The project is on track to open a full two months early, March 1, 2012 instead of May 2012.  After thanking their tour guides, the Scouts posed for a picture with them and headed home with several of their pin requirements checked off.
Posted by Leesa Bartu at 9:29 AM No comments: 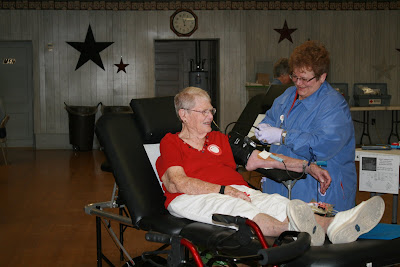 Elva McBride of Exeter donates a pint of blood at the American Red Cross Bloodmobile on Friday.
"Our goal was 32 pins so we beat that," a thrilled Doris Hall explained.
The American Red Cross Bloodmobile was in Exeter last Friday and exceeded the goal of 32 pints by 3.  Thirty-seven donors came and just two were not able to give.  There was a first time donor, Piper Niemann, along with a one gallon donor, Adam Erdkamp and a two gallon donor, Larry Cudaback.
"It takes everybody to get this thing going, we have lots of volunteers and good help here," said Hall. Some of the helpers she was referring to were the escorts, Sharon Dyer, Carol Shafer and Kathleen Wilbeck.  Also sitting at the front desk were Erma Adamson and Roma Rhodes.
The United Methodist ladies provided and served a lunch for donors. Those who helped were Evelyn Michl, Cathy Rhodes, Louise Hall, Shirley Taylor, Sylvia Murphy, Janice Miller, LaVonne Guthrie, Roma Rhodes, Frances Becwar, Sandra Horne, and Shari Michl.  Mary Wince furnished the orange juice for the event and those who loaded and unloaded all the equipment were Robert Rhodes, Steve Rhodes, Larry Cudaback, John C. Miller, Adam Erdkamp and Sterling Dyer.
Hall along with Ekeler takes the appointments beforehand in Exeter and Hall coordinates with the American Red Cross throughout the day.  The next bloodmobile will be October 21st in Fairmont.  There have already been commitments made for the October event.  Anyone wanting to schedule an appointment should contact Donna Lefler or Elva McBride.
Posted by Leesa Bartu at 9:28 AM No comments: