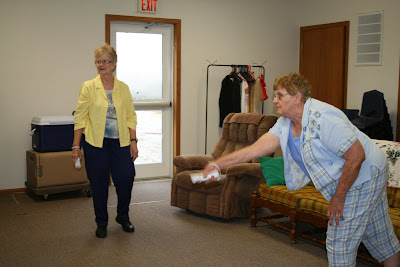 Roma Rhodes (left) and Evelyn Michl (right) try out their bowling skills on the Wii recently purchased with grant monies by the Exeter Senior Center. 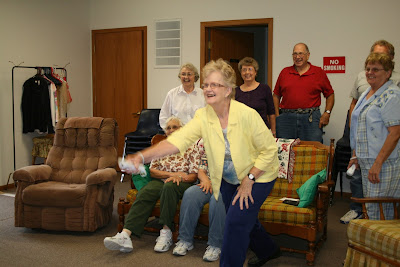 According to Fillmore County Senior Services Director Brenda Motis, the Senior Center Advisory board had "talked about having Mahoney House come and bring their Wii for the group here to try out but the TV we had here was not capable of hooking up and that conversation evolved to 'why don't we buy our own?' and they thought they should apply for the grant."

After estimating the costs of the purchase of a new flat screen TV along with the Wii and a DVD/VCR player they submitted their grant proposal and received the funds to purchase the complete package.

According to Motis, "We are trying to reach a different population of people. We want to get people up and doing more physical activity. When they leave here we want them to feel good about themselves and what's going on."

Of course, there is a still a learning curve with the Wii. The generation hanging out at the senior center isn't exactly video game friendly but several of them have computers and email regularly. That is part of the challenge of equipping the center with this new equipment.

Part of what made the Wii so attractive for the center was, "the many capabilities of the Wii. You can watch picture slide shows from a memory card and even create your own puzzle from a photo and then assemble it on the TV with the Wii. With all of the fitness and training options there a lot of different things you do with it and no one should ever get bored," explained Motis.

In the future the Center hopes to purchase additional remotes so that four can play at once, either bowling or doubles tennis, as well as additional games. They also plan to host Wii tournaments possibly pairing up seniors with their grandchildren or friends.

"We want to bring laughter and some silliness in the lives of the seniors in the area. We are trying to grown and encourage anyone in the community to come to the senior center, we would love to see them here," said Motis.
Posted by Leesa Bartu at 9:43 AM No comments: