Carly Stokebrand and Marcus Ruhl, both Exeter-Milligan graduates and now students at Concordia University in Seward, qualified to compete at the National Association of Intercollegiate Athletics (NAIA) Indoor Track and Field National Championships.

They are currently in Johnson City, Tenn. at the competition.

Marcus Ruhl is participating in the heptathlon and Carly Stokebrand is competing in the weight throw.

On Thursday, Marcus competed in the 60 Meter Dash and placed 5th in his heat and 13th in the finals with a time of 7.55 seconds in both rounds.

To follow their progress visit the Concordia University website which also contains links to the latest scores and a complete schedule of events.

Congratulations to these Exeter-Milligan Alumni!!

Carly finished 12th overall nationally in the weight throw with a throw of 15.98 meters.
Upon finishing his events for the heptathlon Marcus, a sophomore, finished in 15th place.
Posted by Leesa Bartu at 6:39 PM No comments:

The Exeter-Milligan boys defeated Palmer at Cross County tonight by a convincing 19 points picking up their first entry to the State Tournament in Exeter-Milligan history!! See you in Lincoln!!
Posted by Leesa Bartu at 10:11 PM No comments: 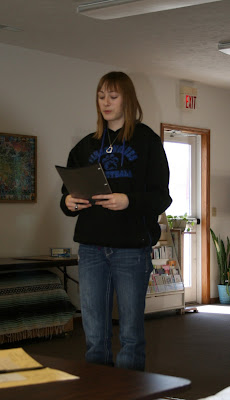 Heather Pribyl gives her humorous prose on Tuesday afternoon at the senior center. 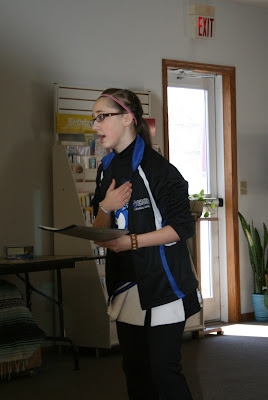 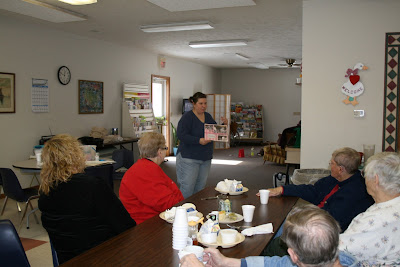 The Exeter Senior Center has hosted several programs after their lunch bunch on Tuesdays. On February 23rd Leesa Bartu spoke to the group on scrapbooking. The emphasis of her talk was on preserving family photographs and ways to keep photos safe. She also share some simple scrapbook tools and ideas with the group. 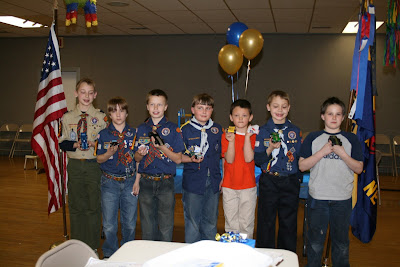 Exeter Scouts pose with their Pinewood derby cars and their awards 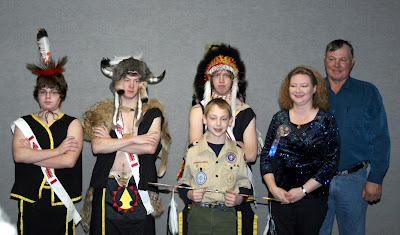 Trystan Brandt with his symbolic arrow of light, his parents, Roger and Diane Brandt and Akela, the medicine man and the drummer.

Exeter Cub Scout Pack 218 held their annual Blue and Gold Banquet, Sunday, February 28th. A very special ceremony was held at 5 p.m. conducted by the Golden Sun Lodge of the Order of the Arrow. Trystan Brandt of rural Milligan was presented with his Arrow of Light, the highest award in Cub Scouting.

Trystan, the son of Roger and Diane Brandt, was also recognized for completing all 20 of the Webelos Activity pins. A reception, hosted by his parents was held immediately following the ceremony.

The flags were presented by the pack at 6:00 p.m. with a prayer led by Peytan Brandt prior to sharing in a potluck meal. District Representative Phil Hallisey presented a brief program on the Friends of Scouting program. After some clean up the scouts presented a skit honoring the 100th birthday of scouting in the United States.

All seven boys in the pack achieved their rank this year. The only Tiger Cub, Jackson Beethe, received his Bobcat and Tiger badge, Peytan Brandt and Johnny Babula both received their Bear Badge, Eric Olsen, Travis Gilliam and Joey Bartu all received the rank of Webelos. Joey also received the Joyful Servant religious award. Trystan Brandt received his arrow of light patch (which is the only rank badge that Cub Scouts can wear on a Boy Scout uniform), along with the all 20 activity badge.


Next the group moved on to the pinewood derby. Each year Stanley Rhodes generously brings his track and his crew. This year Robert Rhodes and Lance Larsen were his crew. These men also judge the cars for the show portion of the evening.

Each boy races each other twice with the boys switching lanes on the second race. This year's race was a tight one with Exeter-Milligan fourth grade teacher, Susan Wait as the end judge. In a run off Peytan Brandt narrowly defeated Eric Olsen to take first, Eric took second and Trystan Brandt won third place int he race. Cars are divided into two categories for the show division - stock and modified. Joey Bartu earned first place in the stock show category with Eric Olsen in second and Johnny Babula in third. In the modified division Peytan Brandt took first and Trystan Brandt took second. Cubmaster's awards for best first cars went to Jackson Beethe in first and Travis Gilliam in second.

The boys posed for pictures with their medals and cars and then led the closing flag ceremony.
Posted by Leesa Bartu at 5:31 PM No comments:

Posted by Leesa Bartu at 5:17 PM No comments:

Village of Exeter Board Meeting Changed

The Exeter Village Board has postponed their monthly meeting to Wednesday, March 3rd at 7 p.m. at the village office.
Posted by Leesa Bartu at 10:19 PM No comments: