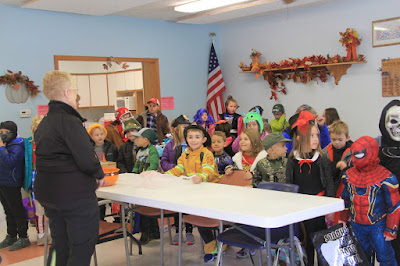 Exeter-Milligan elementary students paraded downtown Exeter on Halloween.  They stopped and sang at the senior center before heading to downtown businesses to trick or treat.

Above - Exeter-Milligan Kindergarten, first and second graders sing to the guests at the Exeter Senior Center.
Below – Making the motions with their Halloween song are (L-R) Kora Havel, Landri Johnson and Kolt Songster. 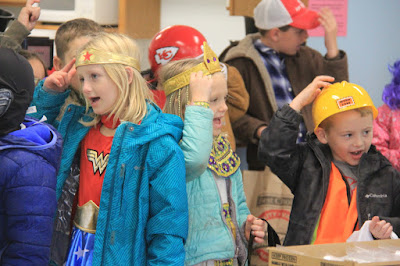 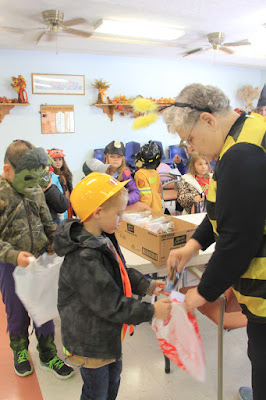 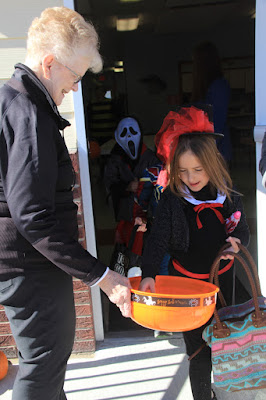 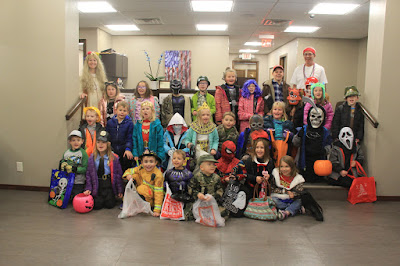 Above – The Exeter-Milligan kindergarten, first and second graders pause for a picture with the hippies (Alan and Amy Emshoff) at Generations Bank in Exeter.
Below – Flower child Ashley Kassik passes out a treat to army soldier Axel Erdkamp. 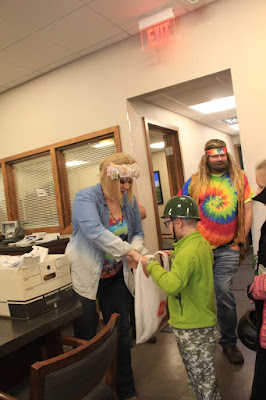 Trunk or Treat in Exeter 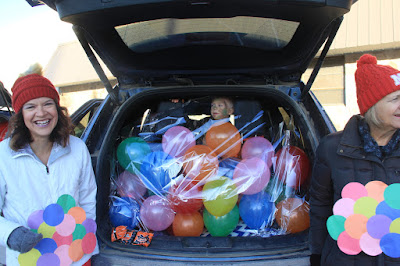 Allison Petersen (right) and Carol Dirks seem to have a special prize stuck in their gumball machine (Kenan Petersen) at Exeter’s Trunk or Treat on Halloween.

Exeter held their first ever Trunk or Treat downtown in front of the fire hall.  The event, sponsored by the Exeter Public Library was a huge success.

Exeter Librarian Lynette Trauger was thrilled with the results, “We had a great turnout, a lot more than I expected.  We had 100 hot dogs ready and they were gone.  It was a win win situation for the younger crowd and the older crowd.”

The streets were blocked off and over 20 vehicles and stands were set up to pass out goodies to the trick or treaters.  After passing through the trunks attendees could enjoy a hot dog supper in the warm senior center where there was more candy to collect.

Fire department members passed out candy from the ambulance and a fire truck.

All of the food was donated along with the cotton candy that was spun inside the senior center.

Trauger is already making plans for next year’s event and plans to incorporate feedback from young and old. 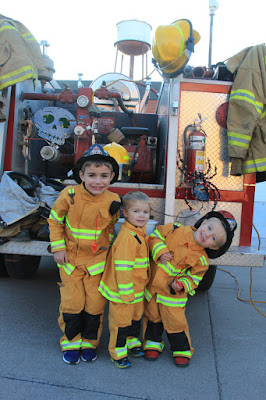 The fire department got some young recruits at Trunk or Treat in Exeter.  From the left are Reed, Rex and Ryker Wince all ready to help in their firemen costumes. 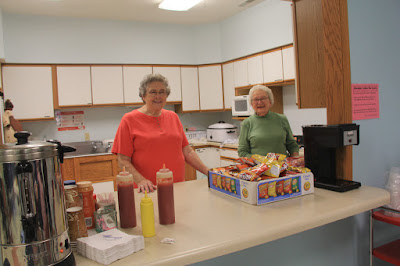 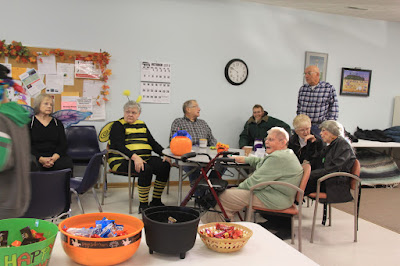 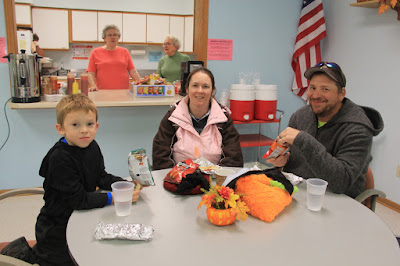 Above -The Engert family enjoyed their supper out at the senior center on Halloween.  From the left are Archer, Brandy and Cory Engert.

Below – Brooklyn Lawson gets a treat from Shelby Bell in the line of cars on the side of main street in Exeter at Trunk or Treat. 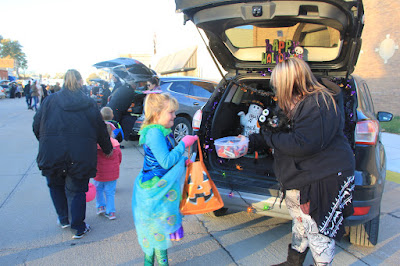 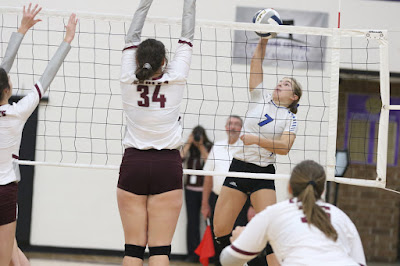 Exeter-Milligan dominated sub-districts but when they drew BDS for sub-state they knew they had a tough row to hoe.  The Eagles came out fighting and the Timberwolves scratched and clawed but came up just short at the end losing three sets 25-13, 25-15 and 25-19 to end their season.  Great season, ladies! 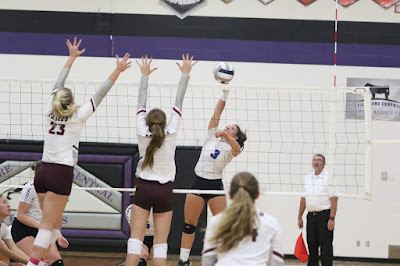 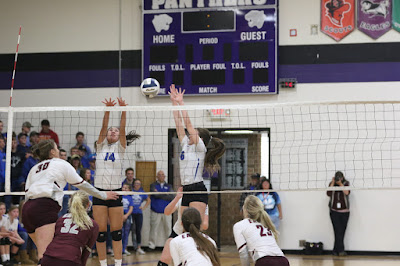 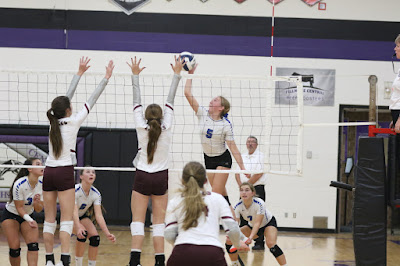 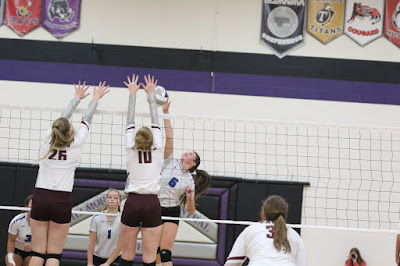 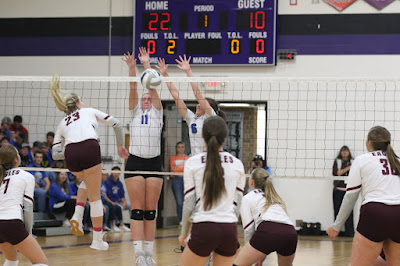 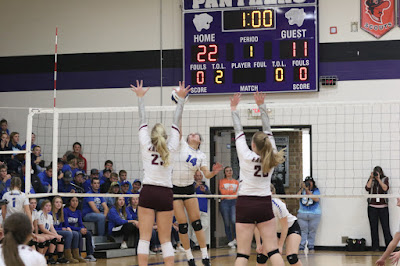 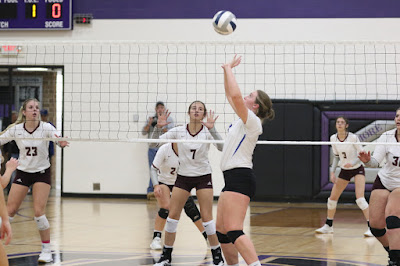 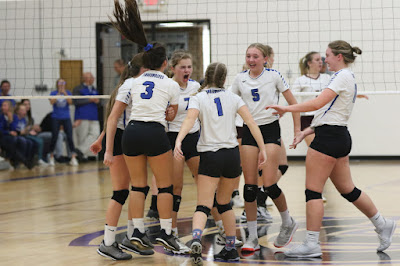 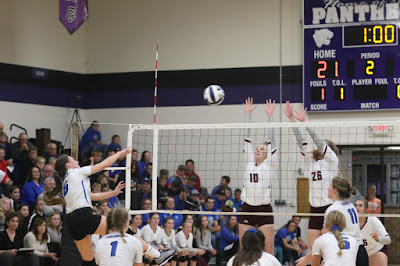 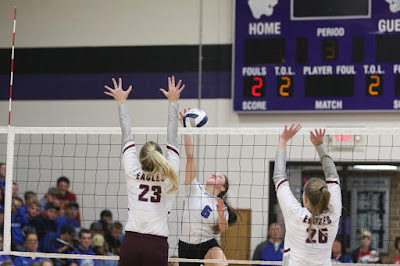 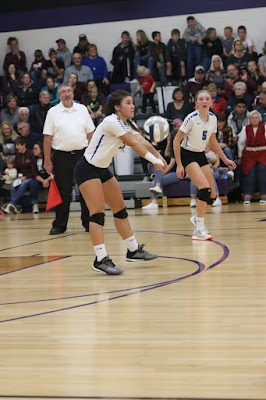 The Exeter Village Board meeting met on Tuesday, Oct 8 2019.

After approving the minutes and the board reviewed the invoices including the labor for new concrete at the fire hall.

Kathy Erdkamp asked if the rural fire department was going to pay for half. “I’m not trying to stick them or anything but I think they need to pay half.”

Village Maintenance Supervisor John Mueller confirmed that the pool slide will be refurbished in the spring.  He also reported he had found where the pool was leaking, “The seam on the deep end pretty much all the way around.  JEO will be out to look at the problem.”

He reported that that he is going to order some culverts, the fire hall is done, the park cement will also be done this fall, a storm sewer will be put in east of town where a new building is being put up and he got the valve in the lagoon repaired.

Clerk Becky Erdkamp reported sales tax for July was $9772.55 and Keno for August was $481.88. She also received a letter advising the village that the one year warranty on the downtown improvements would be expired in November and any defects need to be recognized now.

Erdkamp noted that neon Exeter sign is not working and will be checked for storm damage as there was a lightning strike in the area.

Erdkamp highlighted the importance of village residents completing and returning their census package when it comes in January 2020.  “It will help the village in getting grants. People don’t fill out the money part of it but they don’t hold it against them, it helps us get money.”

The board set the next meeting for Tuesday, November 5.
Posted by Leesa Bartu at 7:30 AM No comments: