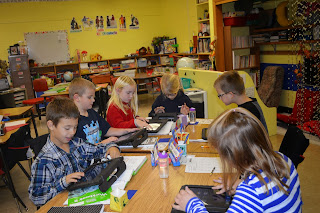 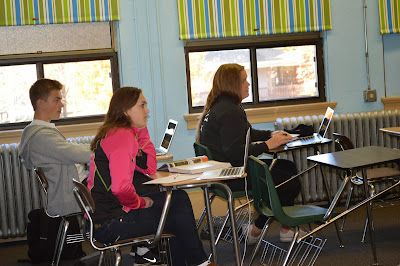 The Exeter-Milligan 7-12 Students traded in their MacBook Pros for MacBook Airs in a one to one refresh this year. The new computers are lighter and faster than the older models and are equipped with the latest operating system and applications. They also have a much longer battery life, which allows the students to use them fully throughout the school day.

Exeter-Milligan has become fully immersed in Google as a Google School. The students use Google Drive to create and store documents, spreadsheets and presentations. Teachers have added their own Google Sites to the school website which can be found at www.emwolves.org.

In the elementary school the students have been given iPads to use. Every student in Kindergarten through 6th grade has access to his or her own iPad. These are equipped with the latest applications and operating system. Teachers are able to engage students throughout the day with various applications.  Many times, a student can be heard saying, “Hey, I think we have an app for that.” 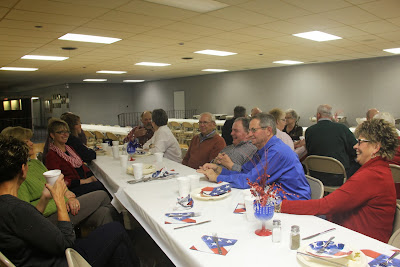 The Exeter American Legion Post 218 members were invited to a dinner on Veteran’s Day.  Many of the veteran’s and their spouses were able to attend and had a wonderful meal. 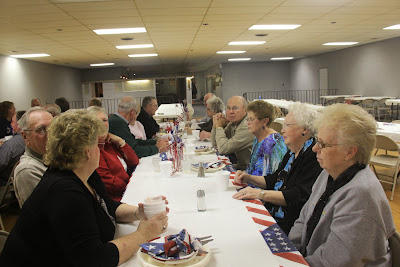 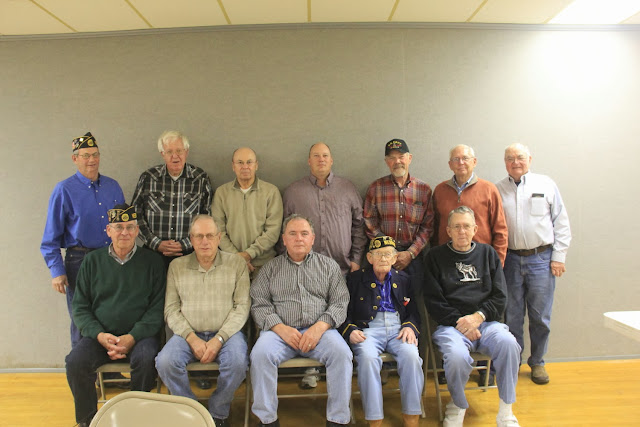 The Exeter American Legion Post 218 members were invited to a dinner on Veteran’s Day.  Many of the veteran’s and their spouses were able to attend and had a wonderful meal.  The veteran’s posed for a picture after eating.  Pictured in the front row from the left are Butch Jansen, Ray Franzen, Bob Becker, Alva Smith, Richard Nicholas.  Pictured in the back row from the left are Alan Songster, Ed Robeson, Bob Dumpert, Craig True, Jim DeJonge, Jack Underwood and Sterling Dyer.
Posted by Leesa Bartu at 7:30 AM No comments: 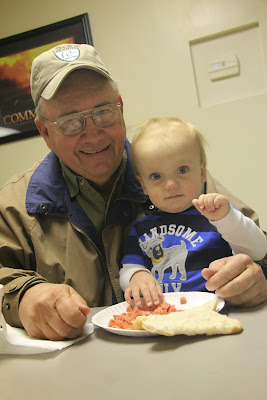 The Exeter Chamber of Commerce rescheduled the Halloweenie event that preempted by the Exeter-Milligan football game.  Instead, the chamber wanted to celebrate Veteran’s Day and invited the community to enjoy a free hot dog supper.  Above, Tommy Kallhoff enjoyed some assistance from Paul Jensen with the hot dog supper.
Below - Matt Nicholas and fiance Jennifer Meyer enjoyed hot dogs on the Exeter Chamber of Commerce, Monday, November 11th during the free Hot Dog Feed. 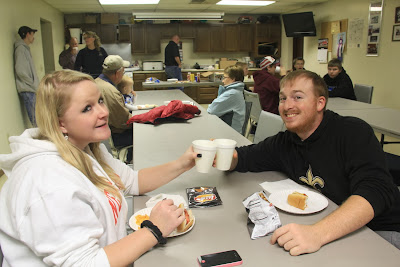 Exeter-Milligan moves on to semi-finals

Exeter-Milligan met Randolph in the NSAA quarter final match up in Milligan Tuesday evening.  The clear cold evening was no match for the fired up Timberwolves.
The fans got nervous after the scoreless first quarter but the Timberwolves proved why they are #1 in the Omaha World-Herald poll bring home the bacon with a 42-22 win.  Even with the game ending injury of quarterback Nolan White, the Timberwolves prevailed.  James Sluka stepped into the quarterback spot and led the team to victory.
The Timberwolves (11-0) will head to Creighton (11-0) 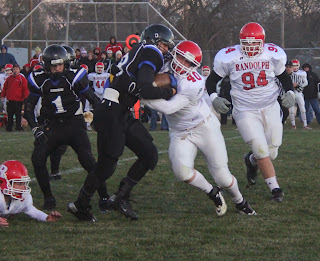 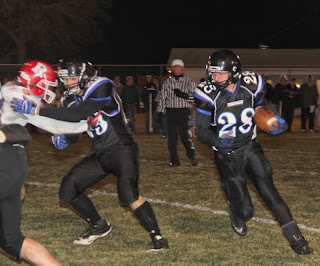 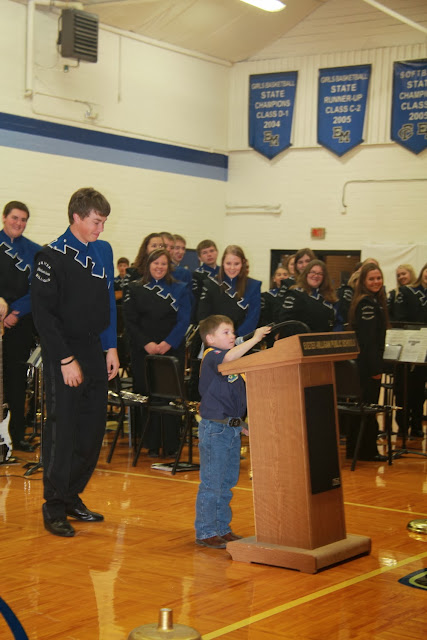 Exeter-Milligan Senior Alex Benorden welcomed the crowd before Exeter Cub Scout Pack 218 presented the colors and led the crowd in the Pledge of Allegiance.

The band also performed “America, the Beautiful,” before requesting that all veterans present stand when their service branch theme song was played.  The band played a medley of the theme songs in “America’s Finest.”

Exeter-Milligan’s own Tim Wilbeck, a Vietnam Veteran, gave the message at the program.  Wilbeck’s emphasis was on appreciating and honoring the veterans among us.

Wilbeck began his speech with sobering statistics, “More than one member a day of active military or reserves commit suicide.  More service members die by their own hand every day than die in combat in Afghanistan.”

“We have a duty to those who have experienced the horrors of war first hand. . .it is up to us to ensure that every veteran knows his service is appreciated,” explained Wilbeck.

Wilbeck went on to tally up how many veterans from each war are still living with veterans of the Vietnam war being the largest group.  With World War II veterans aging their numbers are falling quickly.

“We must honor not just those who fought but all who have served in our armed forces.  They expressed their willingness to serve and even die for this country,” noted Wilbeck.

He spoke of veterans who have lost limbs and how some were able to make a difference with the victims of the Boston Marathon bombings.  Wilbeck spoke of two wounded warriors who visited Boston victims six days after the attack.  One of the wounded warriors explained to those who had just lost limbs, “This isn’t the end, this is the beginning.”

“This was an inspirational story of a veteran, not the technology for those who have lost a limb.  This came from the heart,” said Wilbeck.

Wilbeck touched upon one of the often forgotten groups of veterans, the women who have served our country and lost their lives.  “There are 1.2 million women veterans in American who deserve our support.  There are 22 million veterans who need  to be treated as saviors  of our country.”

Wilbeck read a poem by Andrea C. Brett, “I Am a Veteran,” before requesting that “God bless America and God bless our veterans.”

The Exeter-Milligan Junior High Choir sang “Our America,” which was comprised of many popular songs that celebrate our country.  The Exeter-Milligan High School Choir members Kimberlin Ruhl and Hunter Stride performed “My America,” and then were joined by Friends of Vocal to perform “Inscription of Hope.”

Exeter-Milligan Senior Erica Yound dismissed the attendees from the program. 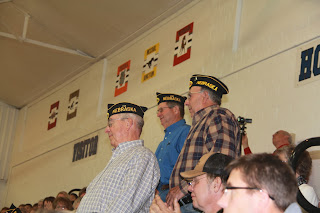 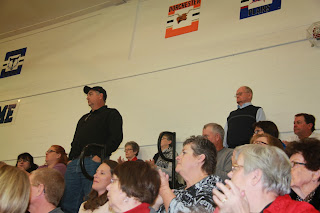 Mark Beethe and Kenny Due 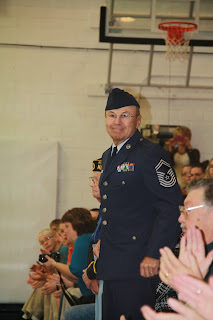 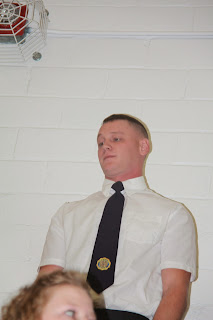 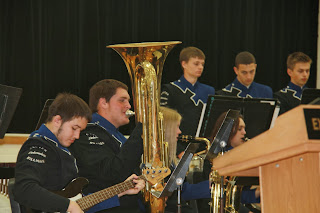 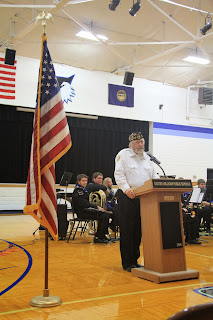 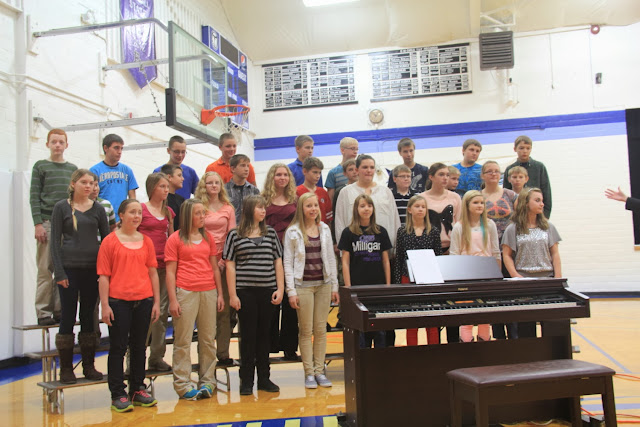 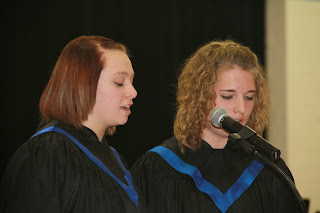 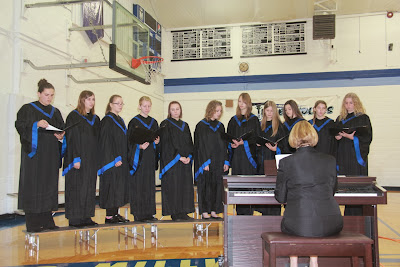 Exeter-Milligan Choir and Friends of Vocal perform "Inscription of Hope." 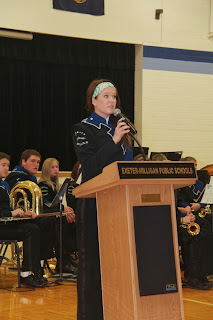 Erica Yound dismisses the crowd.
Posted by Leesa Bartu at 9:57 AM No comments: