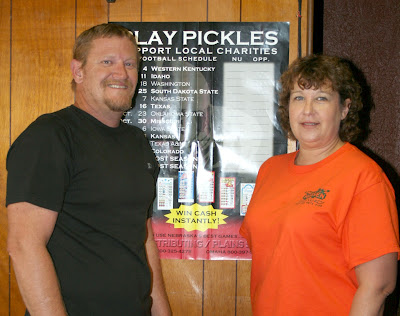 There are new owners of a familiar establishment in Exeter.

They plan to keep many of the “Gator’s” traditions including karaoke on Thanksgiving eve. In fact they hope to expand on the tradition and add monthly karaoke after the first of the year. Of course the NASCAR parties that Gator’s was famous for will be continued in February.

One thing that will be changing will be the menu. Graham, the former chef at the York Country Club, as well as the club’s kitchen manager, has lots of culinary plans. “We plan to add steaks to the evening menu along with spaghetti and fettuccine.”

John E’s will add a lunch buffet starting in November and “the menu will expand as I can get in here and
get situated in the kitchen,” said Graham.

Currently John E’s is serving burgers, wings and chicken strips accompanied by fries and onion chips. However, they always have specials and events going on that the post on their Facebook page.

This summer Graham and Walford are looking forward to hosting a bike and car show and shine. The envision opening a beer garden to the north of their building.


Purchasing the bar embodies what the couple has enjoyed about small town living as they have lived in Cordova for the last year, “meeting lots of new people and making friends.”
John E’s plans to celebrate their new business by hosting a grand opening on October 15th featuring a live performance with Shawn Cole. Cole will also be performing at the New Year’s Eve party at John E’s.

Services 10:30 a.m. Friday
Officiating is Pastor Hugh Campbell
Farmer & Son Funeral Home
Geneva, Nebraska
No visitation
Memorial fund in Jalani's name has been started at the 1st National Bank in Exeter
Posted by Leesa Bartu at 10:36 AM No comments: 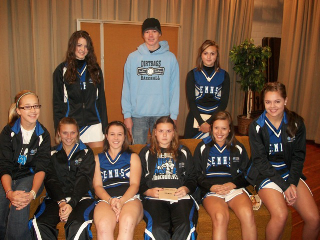 The One Act Play Team will be presenting “Mother Knows Best”, a comedy featuring a few familiar nursery rhyme characters, by Geff Moyer this season. Heuer Publishing provides the following synopsis of the play:
“This play presents Mother Goose characters in a whole new light. Little Miss Muffet wants something besides curds and whey to eat, Jack is suffering from a multiple personality disorder, Georgie Porgie won't stop stealing kisses, Mary’s being very contrary, Tom the Piper’s son shows up with his stolen pig, and everyone else is peeved about something. During a mandatory therapy session, counseled by the Good Fairy, it is discovered that the lyrical land of enchantment is getting a better offer from a big competitor, and they are being swayed.”
What will the Good Fairy do to keep the disgruntled characters from jumping ship? The Exeter-Milligan One-Act team invites patrons to find out by attending one of their performances.
The first presentation of the play will be at the One Act Play Dessert Luncheon on Sunday, November 7th. This event will be co-hosted with the Exeter-Milligan FCCLA. “The dessert luncheon will give the actors an opportunity to perform in front of a live audience before they take the play to competition,” stated Director Jami Ellis, “and it will be a lot of fun for everyone involved—especially with the fantastic deserts provided by the FCCLA. Senior actress, Lindsey Klemm, is very excited about the upcoming performances of the play and adds, “We should have a good play this year because we have a good mix of experienced actors and new talent.”
After the luncheon, the one-act team will compete on November 17, 2010 at the CRC Tournament and at the District Competition on November 29th and 30th.
Posted by Leesa Bartu at 10:30 AM No comments:

Can you identify anyone in this photo?

Posted by Leesa Bartu at 5:52 PM No comments: