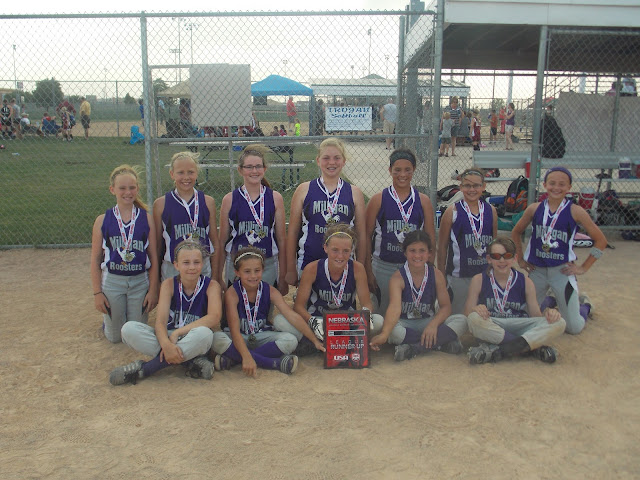 
The League Tounament was held in Hasting this year at the Smith Softball Complex. The 12's were in the B division bracket and place 2nd
and the 8's were in the C division bracket and place 4th
Above:  12 and Under
Front from the left Josie Kresak, Jackie Schelkopf, Kelsey Bigelow, Anna Sluka, Kate Jansky Back Row  Georgia Meyer, KK White, Tori Staldorf, Alexis Uldrich, Jacy Schlueter, MicKael Halverstadt and Sydney Schelkopf.
Below: 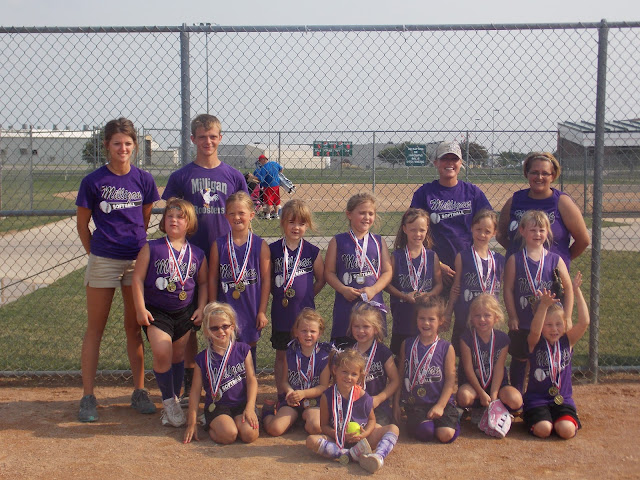 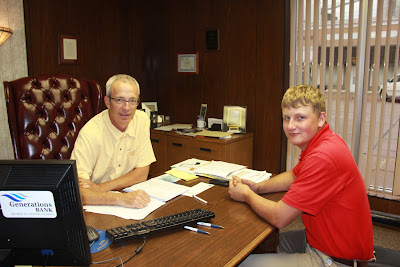 There’s a new face at Generations Bank this summer, Brock Christensen of Superior, Neb. has joined the bank as an intern this summer.

Christensen, a senior at UNL is majoring in Ag Business and Banking and Finance.  He plans to graduate in December.

He heard about the internship program through the Nebraska Bankers Association and the Banking and Finance Program at UNL.  Alan Emshoff, President of Generations Bank was working through the Nebraska Bankers Association to find an intern from UNL’s Banking and Finance program for the summer and they were able to connect and offer Christensen the internship program.

Emshoff worked with the NDED, UNL and the Nebraska Bankers Association to post the ten week internship and Christensen immediately applied.

Christensen hopes to learn “all aspects of banking.  How to be a teller, how to do all the paperwork with a loan, meet a lot of people in the community. It’s a great experience just to see how a bank operates.”

While Christensen was unsure about his future before the internship “The experience here is convincing me to go into banking possibly.  After I get my bachelor’s degree I hope to get a job at a bank or whatever comes up.”

Emshoff sees Christensen’s response as one of the goals of the internship, “We have a shortage of good young bankers out there and through this program by providing an internship we can help have these young UNL grads come out into the workforce and become good Ag lenders.”

Emshoff noted several advantages he hopes Christensen will have through the internship, “One advantage he has is in coming to a small bank like ours is he gets to see many of the aspects of the banking industry – he will work at the teller line, look at credit analysis from the start to the actual making of the loan and see many processes from start to finish.  Even if Brock chooses to be a farmer rather than a banker, his experience here will help him understand what banks are looking for in an Ag setting.”

Christensen will remain work at Generations Bank until he gets ready to go back to his final semester of UNL this fall.
Posted by Leesa Bartu at 11:22 AM No comments:

Robert J. Harre was born on the Harre home farm north of Exeter on March 4, 1942 to Jerome P. and Henrietta J. (Roeser) Harre. He passed away on June 22, 2013 at Bryan LGH East in Lincoln, Nebraska.

Bob was united in marriage to Kathleen P. Murphy on September 16, 1961. They began their own farming and cattle feeding business at that time. The couple was blessed with five children Wade, Matt, Luke, Becky, and Mary. This family has been blessed with eight healthy active grandchildren, Emily, Caroline and Evan Harre, Ryan, Cassie, and Robert James Harre, Elliot and Janey Erdkamp who were Bob’s greatest pride. God and family were the first priorities in this man’s life. He ended each day reciting the rosary with whatever family members were present. He is a lifetime member of St. Stephen’s Catholic Church at Exeter where he received the Sacraments of Baptism, Confirmation, Penance, Holy Eucharist, Matrimony and the Anointing of the Sick in his last earthly days. Bob was also a member of the St. Stephen’s Church Board for over 15 years.

Bob was a lifetime farmer and cattle feeder. In 1990 Bob and his three sons established Harre Feed Yards LLC as a custom cattle-feeding operation and took great pride in serving their loyal customers. His hobby was gun collecting.

Posted by Leesa Bartu at 4:18 PM No comments:

Funeral services for Carla were held on Thursday, June 20, 2013 at 2:00 p.m. at the Trinity Lutheran Church in Cordova. Pastor Brenda Pfeifly officiated the service.

Graveside services were in the Zastrow Cemetery.


Memorials are directed to the Trinity Lutheran Church of the Exeter Senior Center.

Christened Karla Pederson, she lived with her paternal grandmother, Karen Marie Pederson in Bjedstrup, Jutland, Denmark. Both parents had come to American to make a better life. Karla came to the United States through Ellis Island in 1929 when she was 16 years old. Her father insisted that Karla change the spelling of her name to Americanize both her first and family names – so it became Carla Peterson.

She arrived in Sawyer, Nebraska, south of Exeter where her father worked for the railroad. In 1930, the family moved by the Blue River. Not speaking English, she attended School District #7. She always said she learned more by listening to the kindergarteners with their phonics in learning to speak English. She passed the 8th grade exam learning a lot about U.S. History and Nebraska.

Carla met Bernard Due at a platform dance. They married on June 3, 1934 and went to live on the family farm north of Exeter. Two sons were born to them, Don & Dean. They moved to Exeter as Bernard’s health deteriorated. Carla entered Exeter Care Center on October 29, 2005.

Carla loved to dance, and she and Bernard went to several area ballrooms. Carla liked to bake and her Danish pastry was the best. She made several of her favorite Danish foods for family and friends, especially the Ebleskiver. Carla also enjoyed her vegetable and flower gardens, reading, playing cards and entertaining.
She was a member of the Trinity Lutheran Church, taught Sunday school, and was a member of the Cheeralot Club and Exeter Women’s Club.

Carla was preceded in death by her husband, Bernard; parents Karl & Ane; brothers Emil, Jewel, and Dale Peterson; and granddaughter Darcee Due.

She is survived by her sons and daughters-in-law Don & Katherine Due and Dean & Kathy Due all of Exeter; grandchildren Jeff Due, Heather & Delayne Eberspacher of Cordova, Valerie Due & Chris Brewster of San Diego, CA, Jim Due of Exeter, and Bob & Ranae Due of Lincoln, NE; great grandchildren Abby and Spencer Eberspacher of Cordova, Jillian & Danica Due of Lincoln; brother Clifford and wife Joan Peterson of York; sister-in-law Ardys Tesar of Aurora; and by nieces and nephews.
Posted by Leesa Bartu at 7:30 AM No comments: