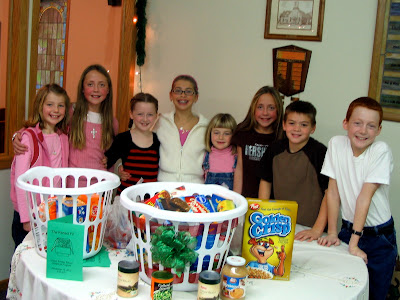 The Exeter United Sunday School performed their Christmas program, "The Perfect Fit," at the United Church of Christ on Sunday, December 12.  The program taught the students that giving and receiving are both important.  Bibles were presented to Katie Mounce, Clarissa Mounce, Caitlin Murphy, and Brooke Poppert following the program.  The Sunday School is made up of children from the Exeter United Church of Christ and the Exeter United Methodist Church. The group collected 90 lbs. of food for the Blue Valley Food Bank at their program.   Students pictured from left to right with some of the donated food items are:  Brooke Poppert, Katie Mounce, Caitlin Murphy, Haylee Sheffield,  Olivia Poppert, Clarissa Mounce, Trevor Swartz, and Patrick Murphy.
Posted by Leesa Bartu at 9:54 AM No comments: 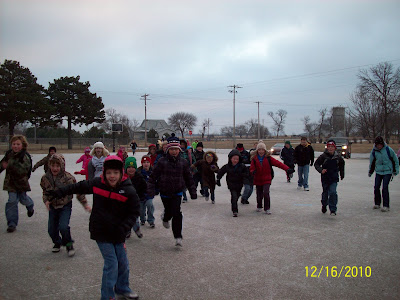 With the recent freezing rain, the elementary students at
Exeter-Milligan practice their skating skills.
Posted by Leesa Bartu at 10:12 AM No comments: 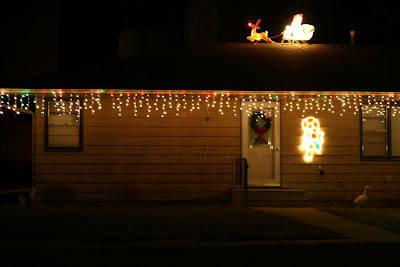 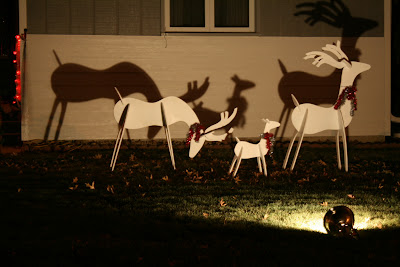 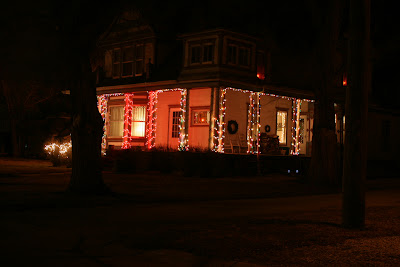 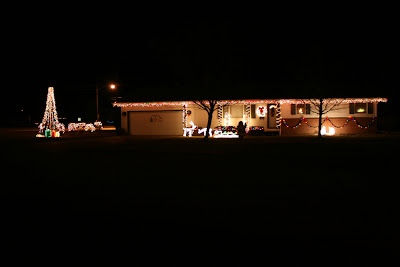 Posted by Leesa Bartu at 9:33 AM No comments: 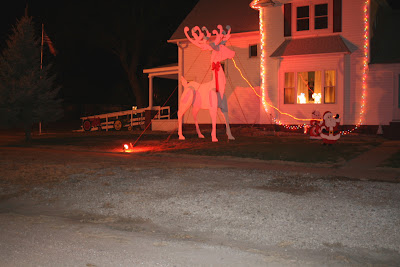 There is a new resident in Exeter. Norm Bristol built this giant reindeer out of 3/4 inch plywood.  The reindeer, which stands on the south side of Bristol's house on North Burlington Avenue in Exeter stands 15 foot tall. According to Bristol he saw the pattern on the front of a catalog he receives and decided to make it. The reindeer withstood the heavy winds this last weekend pulling one stake loose until Bristol was able to restake the line. While the reindeer doesn't have a name, Bristol runs a red spotlight on the figure at night.
Posted by Leesa Bartu at 9:24 AM No comments:

County Supervisors Discuss Paving of Road Between Exeter and Milligan

With hopes high for a special Christmas gift the residents of Exeter and Milligan will be disappointed as they will have to wait until 2011 to see if a road between the two villages will be paved sometime in the future.
The Fillmore County Board of Supervisors met Tuesday, December 14th in Geneva with the road plan on the agenda.  While working through the road portion of the agenda Supervisor Robert Mueller made a motion to pave Road 21 from Highway 6 to Highway 41.
Supervisor Albert Simacek seconded the motion and Supervisor Chair Ray Capek opened the floor for discussion.  The Supervisors asked questions of County Road Superintendent Elmer Hessheimer first.  Several asked if the project was put on the plans would it actually ever have to be done.  Heisheimer responded that it "if did take place, it would be down the road."
Mueller asked Hessheimer what the costs associated with preliminary engineering would be.  A representative of Speece Lewis Engineers present at the meeting estimated that the costs would be around $60,000.
Capek asked guests if they had any comments and Exeter-Milligan School Board member Tim Pribyl commented that he would like to see Road 24 paved.  "I have spoken with the Milligan Fire and Rescue members and they would like to see Road 24 paved.  Road 24 sits right in the middle of Highway 15 and 81. This would give them easier access to the Friend hospital," said Pribyl.
Pribyl also noted the student traffic on the road, "We have at least one vehicle roll over a year on the road."
Several other residents spoke in support of paving one of the roads.  Chairman Capek called for a vote. Supervisors Jerry Galusha, Larry Cerny and Albert Simacek  all voted against placing the paving of Road 21 on the road plan while Supervisors Capek, Mueller and Steve Yates voted yes, Dennis Kimbrough abstained leaving the vote tied three to three and failing.
The board plans to look at the road plan and have it complete in February.
Posted by Leesa Bartu at 9:22 AM No comments: 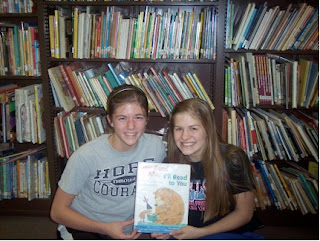 Alicia  Bigelow and Taylor Erdkamp read one of their
favorite children's books, You Read to Me. I'll Read to
You by Mary Hoberman.  The book has short rhymed stories for
two.  It is written for beginning readers and those who like
to experiment with voices. This book would be a nice gift
because it requires two people.  It can be mom and child,
grandfather and child, or babysitter and child. It makes for
an enjoyable event. If you are purchasing for a teen the
following website may be helpful:
http://www.ala.org/ala/mgrps/divs/yalsa/booklistsawards/bestbooksya/bbyahome.cfm
Posted by Leesa Bartu at 9:22 PM No comments: