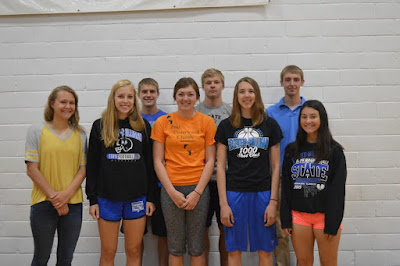 Posted by Leesa Bartu at 3:03 PM No comments: 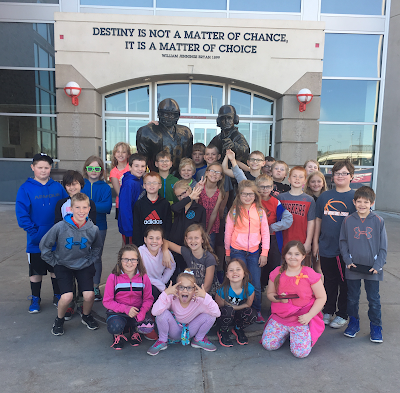 The 3rd and 4th graders from Exeter-Milligan had a great field trip to Lincoln. We went to Memorial Stadium for a tour, Morrill Hall for a planetarium show and finished our day with a Capitol tour. The Ag Sack Lunch program provided our sack lunch and the students learned about agriculture in Nebraska.
Posted by Leesa Bartu at 7:30 AM No comments: 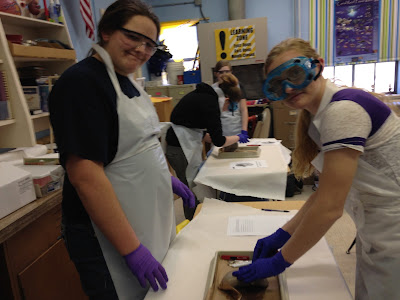 Biology II students at Exeter-Milligan have been studying the various systems of the human body.  Currently we are on the Urinary system.  As part of the class, we were able to dissect pig and sheep kidneys to review the main parts of the kidney.  We will soon be modeling the process of urine formation to understand the function of this system.  We will then move on to the nervous system where we will be able to dissect a sheep brain.

Pictured are Tara Mueller and Hannah Horne dissecting a sheep kidney.
Posted by Leesa Bartu at 7:30 AM No comments: 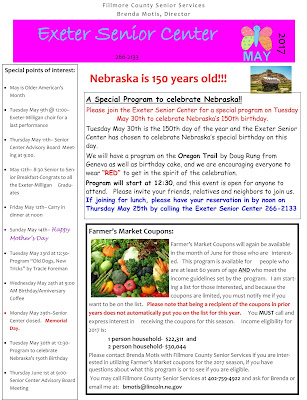 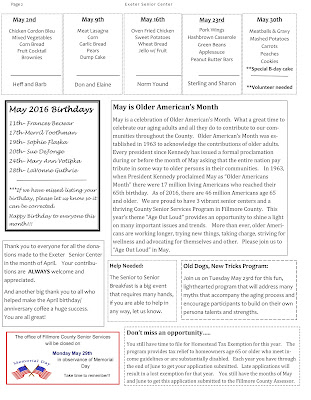 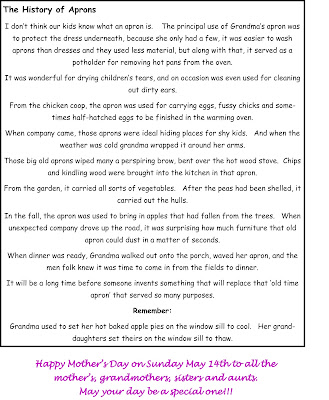 Posted by Leesa Bartu at 2:22 PM No comments:

May Programs and Activities at the Exeter Senior Center 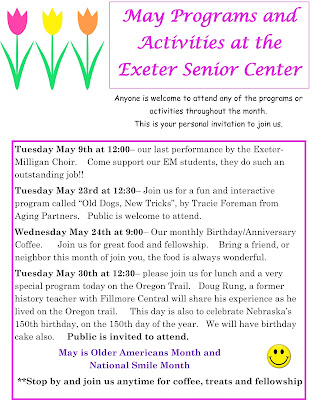 Posted by Leesa Bartu at 2:19 PM No comments: 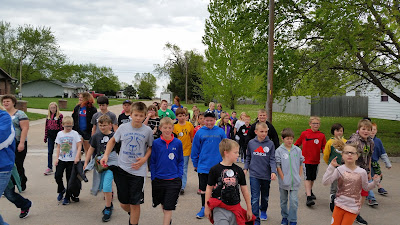 Exeter-Milligan third, fourth, fifth and sixth graders participated in the walk at lunch program Wednesday, May 5 during their lunch hour.  They walked through one of the residential neighborhoods in Milligan before heading to the playground.
Posted by Leesa Bartu at 7:30 AM No comments: 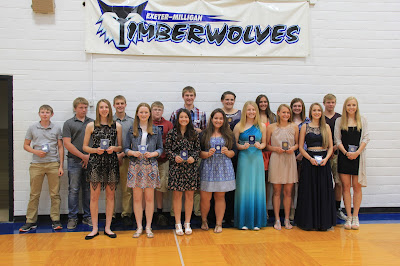 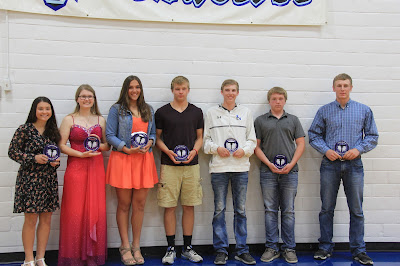 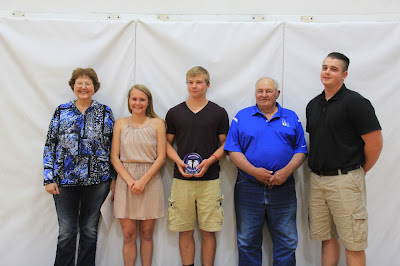 The Exeter gymnasium filled quickly as the 2016-2017 Exeter-Milligan Athletic Banquet was held on Tuesday, May 2nd.

Master of Ceremonies Eric Johnson, Max Country Disc Jockey, invited all of the guests to enjoy a delicious sliced pork supper before the coaches gave their presentations.

First off was Fillmore Central/Exeter-Milligan softball coach Aaron Lauby who introduced the team and shared some of the highlights of the season. Ten Exeter-Milligan girls participated in softball this year and the team finished with a record of 12-17. Junior Hannah Horne received the Leonard Kassik Softball player of the year trophy.

Phyllis Severson introduced the cheerleaders and also announced Dwayne and Cheryl Luzum as the “Fans of the Year.”

In the absence of Coach Filipi (due to illness), Assistant football Coach Jackson Krejci introduced the football players and gave some of the individual players statistics along with recognizing the team for their state playoff berth. Trevor Luzum was honored as the football senior player of the year.

Next up introducing the volleyball team was Coach Darcy White.  White introduced the team and then shared some of their individual statistics, especially the career statistics of the seniors. The team voted on awards and named Kate Jansky as the most improved player and Sydney Hall as the most inspirational, team player and most valuable. The team ended their season with a 28-5 record and a third place finish at the state tournament.  Sydney Hall received the Bill Fitzgerald Volleyball player of the year trophy.

Lisa Kanode coached Junior High volleyball and spoke about their season.  They took third place in several tournaments throughout the season and showed a great amount of improvement.

Krejci also coaches the junior high girls basketball and talked about their season.  Even though the team finished with a 4-7 record there were several very close games and Krejci noted the effort the girls put into the team.

Kanode introduced the junior high girls track team members noting the accomplishments they achieved on Tuesday at the CRC meet. They placed first at the McCool Invite this year.

Coach Katherine Roemmich spoke about the high school girls track team noting that Kate Jansky broke the school record this season in the 3200m run. The team placed third at the CRC meet on Monday. The Bill Fitzgerald track member of the year has not been determined yet.

Coach Brian Murphy introduced the junior high football team and talked about their 3-3 season which included a double overtime loss to Heartlands.  Murphy noted that the team is in its third year of coop with Friend.

Murphy moved on to talk about high school boys track and the success the team has had this year so far.  He recognized retired coach Lonnie Shafer who continues to work with the team and has coached, mentored and inspired many Exeter and Exeter-Milligan athletes including Murphy.

“T-N-T” as Murphy calls them (Trevor Luzum and Trystan Brandt) have now broken six track and field school records this season.  Luzum at the high jump, 110 high hurdles and 300 hurdles and Brandt at the triple jump, long jump and as a member of the 400m relay team. The Walt Barkmeier boys team member of the year has not been determined.