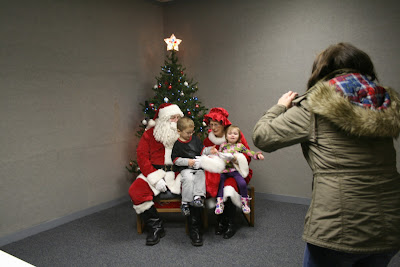 Melanie Ruhl tries to get a picture in fast before the kids lose interest in Santa.

The Exeter Chamber of Commerce sponsored Santa's visit to Exeter again this year. Each child
was invited to sit with Santa and Mrs. Claus for a visit before receiving a bag of goodies and a beanie baby.

After visiting with Santa the kids gathered to play Christmas Bingo for quarters. The kids and the parents had a great time getting a bingo on the special Christmas cards.
Posted by Leesa Bartu at 7:35 PM No comments: 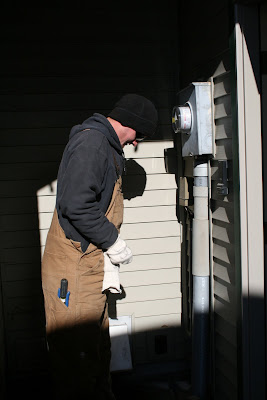 Exeter residents may have a knock on their door from a Perennial Public Power District employee wanting to shut the power off for a minute. Only a minute.

The power company is upgrading every power meter in Exeter to a digital meter. This will allow Perennial to read the meters from their headquarters in York instead of sending an individual to walk the backyards and alleys. Information taken from their website and printed below lists advantages for us the consumer. The change only takes a minute but looks like it will have quite the impact.

According to their website, "Perennial Public Power District began adding smart meters in 2008, and already has 3,318 members connected with this technology. By Early 2010, all of our members will have smart meters.

These meters cut down on operating costs and help co-ops and ppd's effectively manage outages. For example, a smart meter can tell us when the power is out instead of relying on you to call the outage in, and they can help reroute power around problems. Down the road they might be able to help you manage energy use, showing you what power costs at different times of the day to help you make smart energy choices when using appliances."

Copied with permission from Perennial - for more information on the project go to
http://perennialpower.com/ami_deployment.asp
Posted by Leesa Bartu at 9:36 PM No comments: 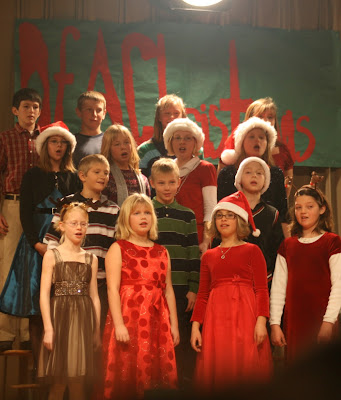 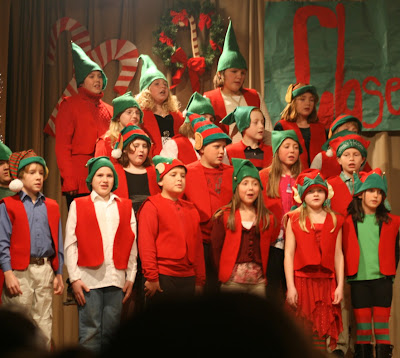 Exeter-Milligan Fourth Grade class were elves in the play "Close Encounters of a Christmas Kind". 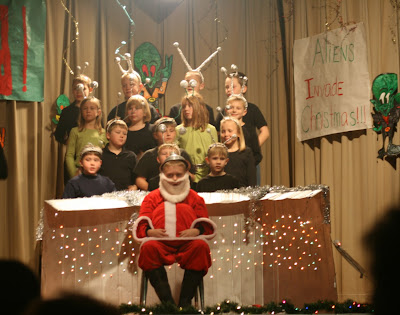 The Third Grade class were the aliens who helped abduct Santa.

It was a "Close Encounters of a Christmas Kind" in the Exeter gym Thursday evening. The Exeter-Milligan Kindergarten through sixth graders entertained their family and friends with band performances, choral numbers and a play featuring aliens and the crew from the North Pole.

The fourth graders took the spotlight as they performed "Rahther Jolly Olde St. Nicholas" on their recorders before the Kindergarteners sang "I'm a Little Snowflake."

The first graders were disappointed that they were getting "Nuttin' for Christmas" while the second graders assured that crowd that "Santa is My Buddy" in their song.

Together the Kindergarten, first and second graders performed "Santa Claus is Coming To Town," Chatter with the Angels," and "Blitzen's Boogie." Their dancing brought down the house asking "But do you know Blitzen?"
The third, fourth, fifth and sixth grade classes performed the musical "Close Encounters of a Christmas Kind" by Michael and Jill Gallina. The third grade started the story of how Santa receives so many letters, faxes and email's with their song "Letters, Letters."

In Scene II Santa was abducted by aliens who tried to read his brain. Santa, played by Sam Zeleny, explained about Christmas and goodwill and convinced the aliens to come back to his workshop so he could explain to them giving and making toys.

During Scene Three, the aliens decided as they were working in the workshop that they would "Make 'Em and Take 'Em" as they hid the toys daily under their beds.
After Mrs. Claus (Janey Due) discovered that the toys were missing she had a discussion with the elves and aliens about solving the mystery and "Do a Kind Deed." The aliens came to their senses and returned all the toys and learned the true meaning of Christmas.
Santa gave each of the aliens their own heart and they returned the favor by giving Santa a red laser beacon to use if he ever needed the help of the aliens.
The audience was informed by the students that whenever they receive a toy from Santa that is electronic, it's the aliens who make those toys.
After the program families and students enjoyed cookies and refreshments in the cafeteria.
Posted by Leesa Bartu at 1:26 PM No comments:

The group that was scheduled to go caroling last Sunday has been rescheduled for this Sunday, December 13th. If you can, bring a plate of cookies to the basement of the United Methodist Church at 4:30 p.m. The group will make plates of cookies to deliver as the carol. At 5 meet in the parking lot of the church to go around town and carol. After caroling bring a snack to enjoy with a light supper in the basement of the church.
Posted by Leesa Bartu at 10:43 AM No comments: 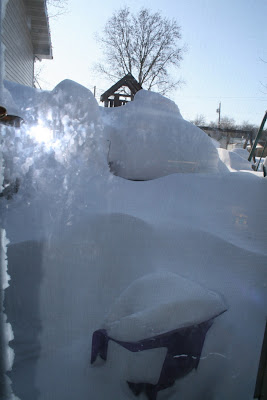 Two snow days and no word on school yet for Thursday it has been quite a few years since Exeter had a snowstorm and blizzard that matched this one. Snow crews are out cleaning and the Village maintenance department has been vigilant about clearing the roadways. Time to get your own driveway and sidewalks cleaned.
Posted by Leesa Bartu at 11:27 AM No comments:

There will be 2 more drawings, December 14 and December 21.

Register to win at businesses in Exeter.
Posted by Leesa Bartu at 2:01 PM No comments:

Check out the new links down on the left side of the page. There are new links to websites that the Exeter-Milligan students have created about some of the school activities.
Posted by Leesa Bartu at 5:42 PM No comments:

Due to the expected winter weather, the Exeter-Milligan K-6 Elementary Winter Music Program has been changed from tomorrow, December 8 to Thursday, December 10 at 7:00 p.m. at the Exeter site.
Posted by Leesa Bartu at 5:25 PM No comments: 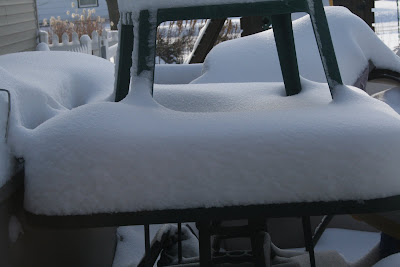 Exeter received 3 plus inches of blowing snow on Sunday but close to a foot a snow is predicted for the area with the snow starting around 7 p.m. Monday night through Wednesday morning.
Posted by Leesa Bartu at 11:22 AM No comments:

The Exeter UCC Women's Fellowship had a successful bake sale on Saturday morning. They announced the winners of the quilt, Eyvonne Johnson. The other raffle items, a crocheted name wall hanging and the $50.00 gift certificate to Greg's Market were won by Klaire Jorgensen (who is attending college in Manhattan, KS.
Posted by Leesa Bartu at 9:37 AM No comments: 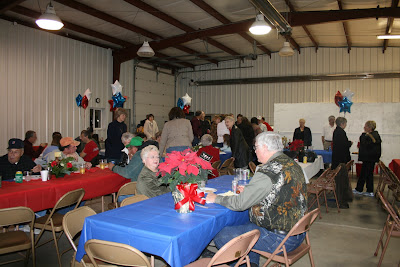 Erdkamp Motors celebrated their 75th anniversary Friday night with an open house. A large crowd enjoyed food and drinks along with some beautiful cars, a little history and generous hosts.

It all began when R. D. Erdkamp started with a franchise for Dodge and Plymouth vehicles in June of 1934 in downtown Exeter. In 1946 after World War II, R.D. moved the business to the current location into buildings he built on East Seneca Street in the 1930’s.

The business has always been in the family with R.D.’s sons, Don, Robert and Leonard joining the dealership in 1946. During that year they also added their current shop on the west end of the building.

In 1964 two of R.D.’s sons, Robert and Leonard, left the business to pursue other ventures and R.D. and Don ran the business alone until Don’s son George joined the dealership. “At that time there were five new car dealerships in Fillmore County,” recalls George, “In 1960 the Dodge corporation split everything up and we were just Dodge.”

The three generations working together was short lived as R.D. passed away at the age of 86 in 1971. In 1982 Don retired and sold the dealership to George and his with Kathy who own and operate the business today.

In 1977 the Chrysler franchise was added with Plymouth back on in 1991 and Jeep and Eagle in 1992. George’s son Adam noted they were at one time “a six line dealership. We had Dodge trucks, Dodge, Jeep, Eagle, Plymouth and Chrysler.” Eagle and Plymouth were phased out in 1998 and 2001 and currently the dealership sells and services Chrysler, Dodge and Jeep.

In early 2004 the dealership again became multigenerational as George and Kathy’s son, Adam and his wife Becky, returned to Exeter and Adam joined the family business. He is the fourth generation to be involved in the dealership.

The closing of nearly 800 Chrysler dealerships nationwide this summer definitely made for some tense moments in the dealership, “It was interesting with all the closing. We had some doubts and were hoping it wouldn’t happen. No one knew the formula,” said George.

It may have to do with their motto; “Our goal continues to be to make each customer’s experience as pleasurable and simple as possible. We also strive to provide excellent service after a sale.”

As the lone new car dealership in Fillmore County and one of the few remaining Dodge dealers in the area Erdkamp Motors plans to be around for at least 75 more years.
Posted by Leesa Bartu at 8:22 AM No comments: