Kindergarten Registration at Exeter-Milligan
If you plan to enroll your child in Kindergarten in the fall of 2015, please plan to attend our Kindergarten registration on Wednesday, March 4th at 4:00pm at the Exeter Site cafeteria. During this time Mrs. Kroll will answer any questions you may have about enrolling your child and will also discuss with you the logistics that go along with having a child in school at Exeter-Milligan. Mr. Sheffield, Superintendent, and Mrs. Judy Kassik, Kindergarten Teacher, will also be available to field questions you may have for them. Marilyn Pribyl, the school nurse, also gives a short presentation. New this year, we will be having a “move-up day” in May that will include kindergarten round-up. Information about this day will be sent out in the near future. If you have any questions, please feel free to contact Mrs. Kroll.
Posted by Leesa Bartu at 7:00 AM No comments: 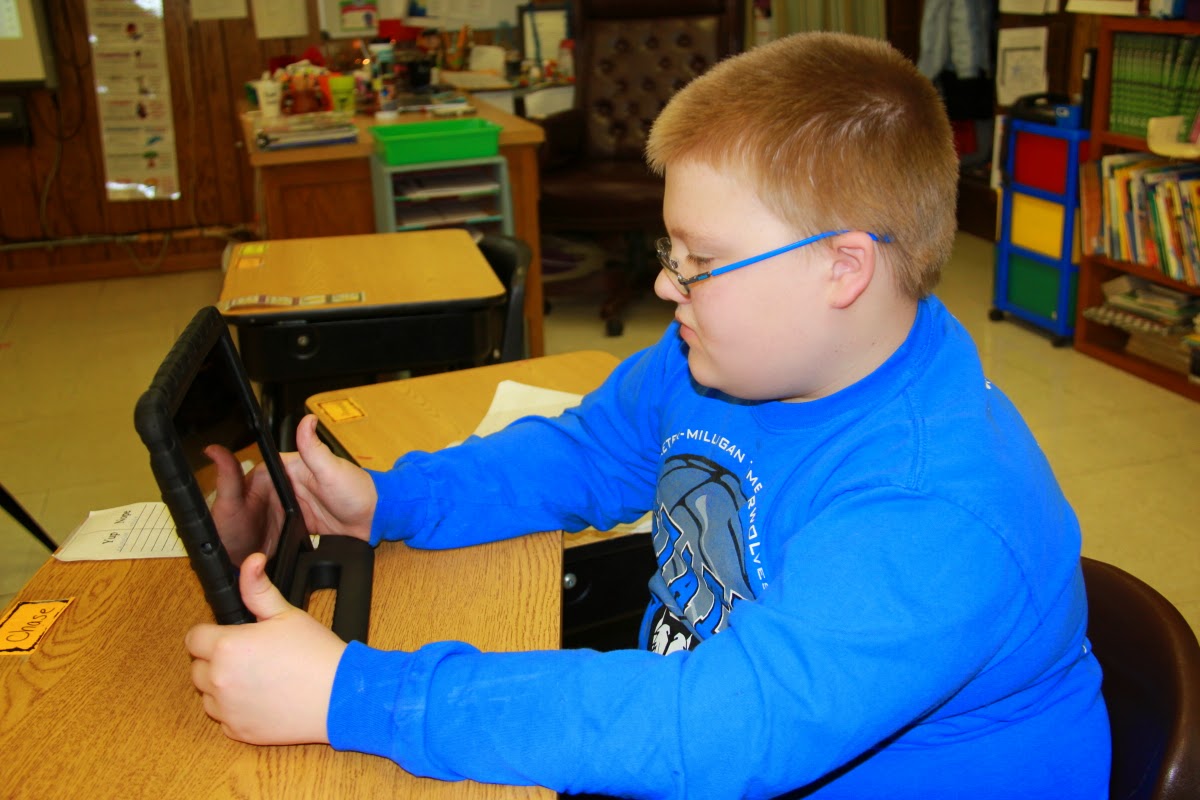 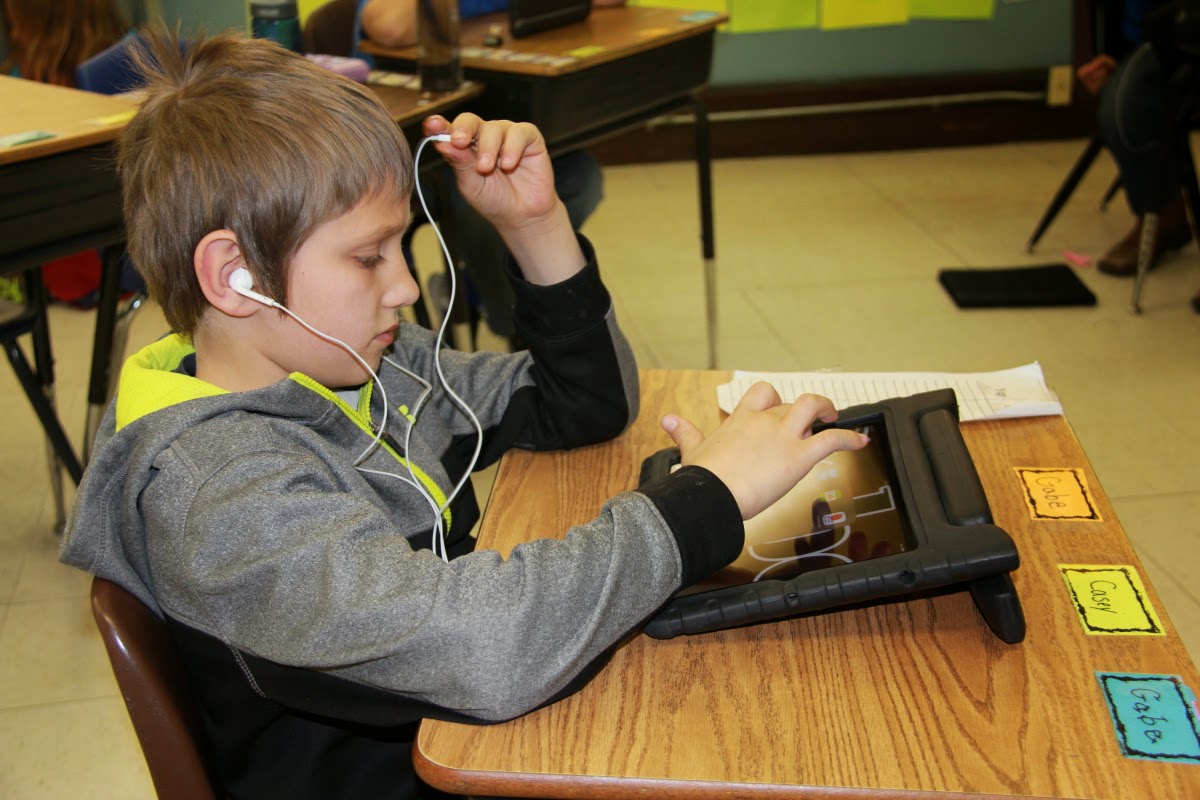 Gabe Jindra picks which app he wants to use for some Core 5 time. 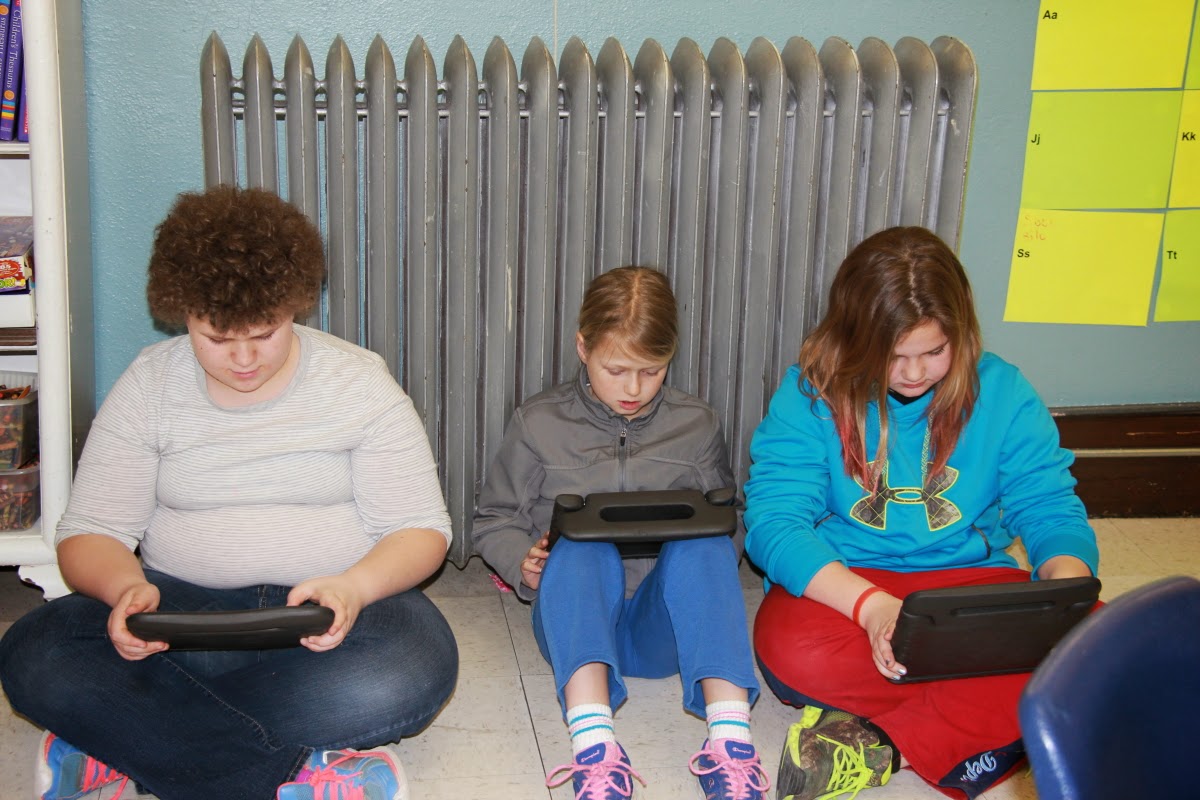 Above- The girls in the fourth grade (l-r) Sophia Gillam, Jozie Kanode and Olivea Swanson stick together with their ipads.
Below: The fourth grade class with their teacher Mrs. Shelli Mueller.  Back row from the left Mrs. Shelli Mueller, Jozie Kanode, Gabe Jindra and Cade Kresak.  Front row from the left Olivea Swanson, Sophia Gillam, Marcus Krupicka and Chase Vnoucek. 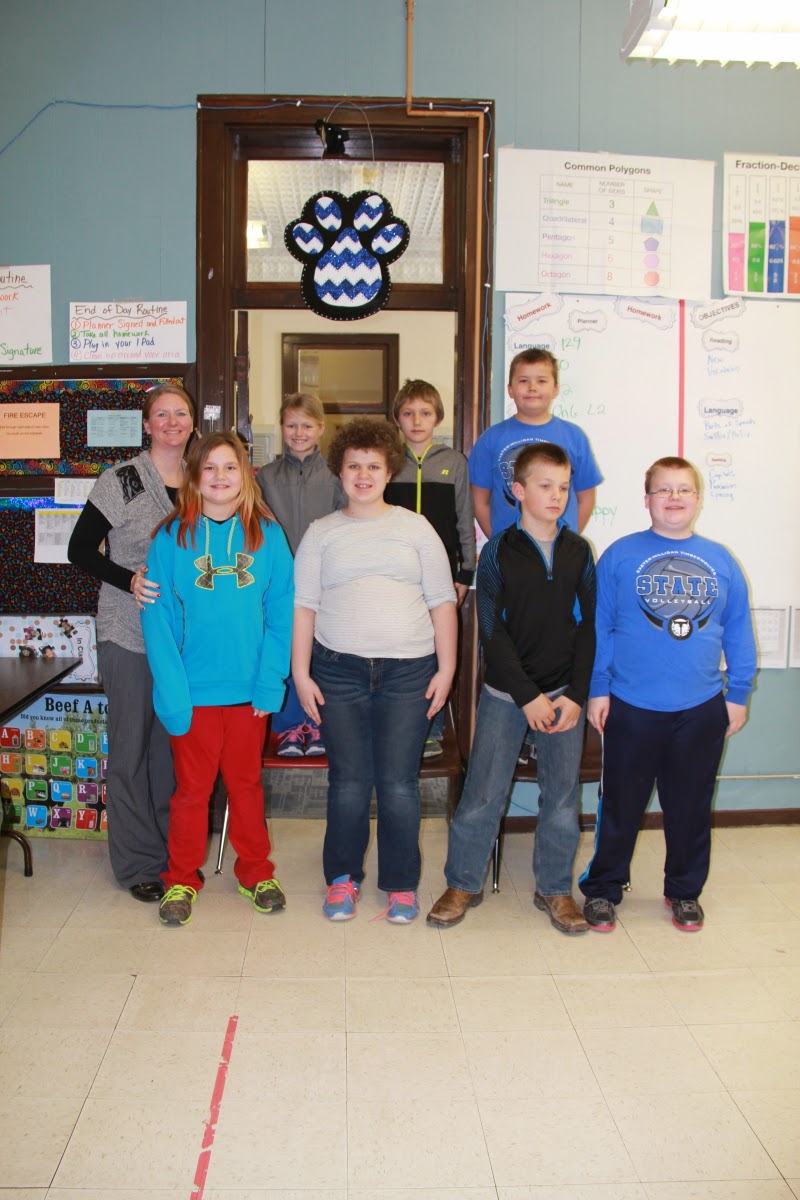 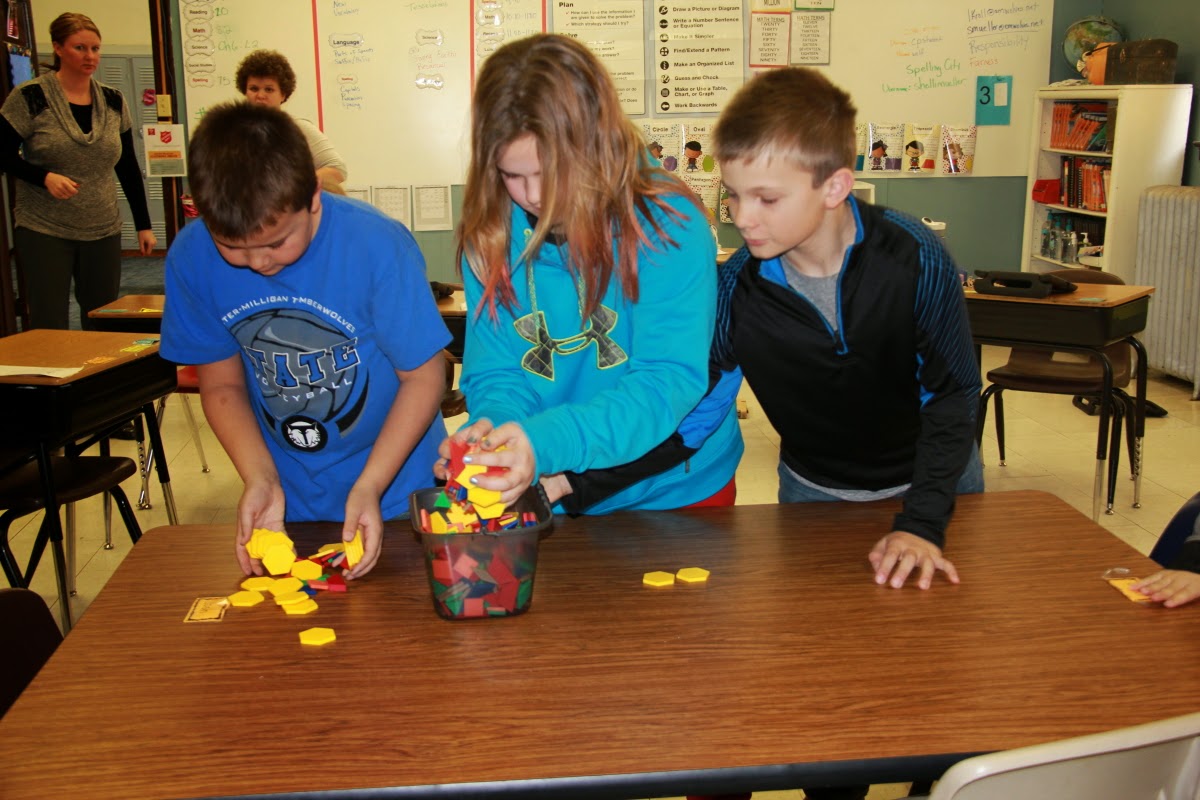 Above: Cade Kresak (left), Olivea Swanson and Marcus Krupicka (right) are excited to dig into the manipulatives to make tessellations (which is tiling of a plane using one or more geometric shapes, called tiles, with no overlaps and no gaps). 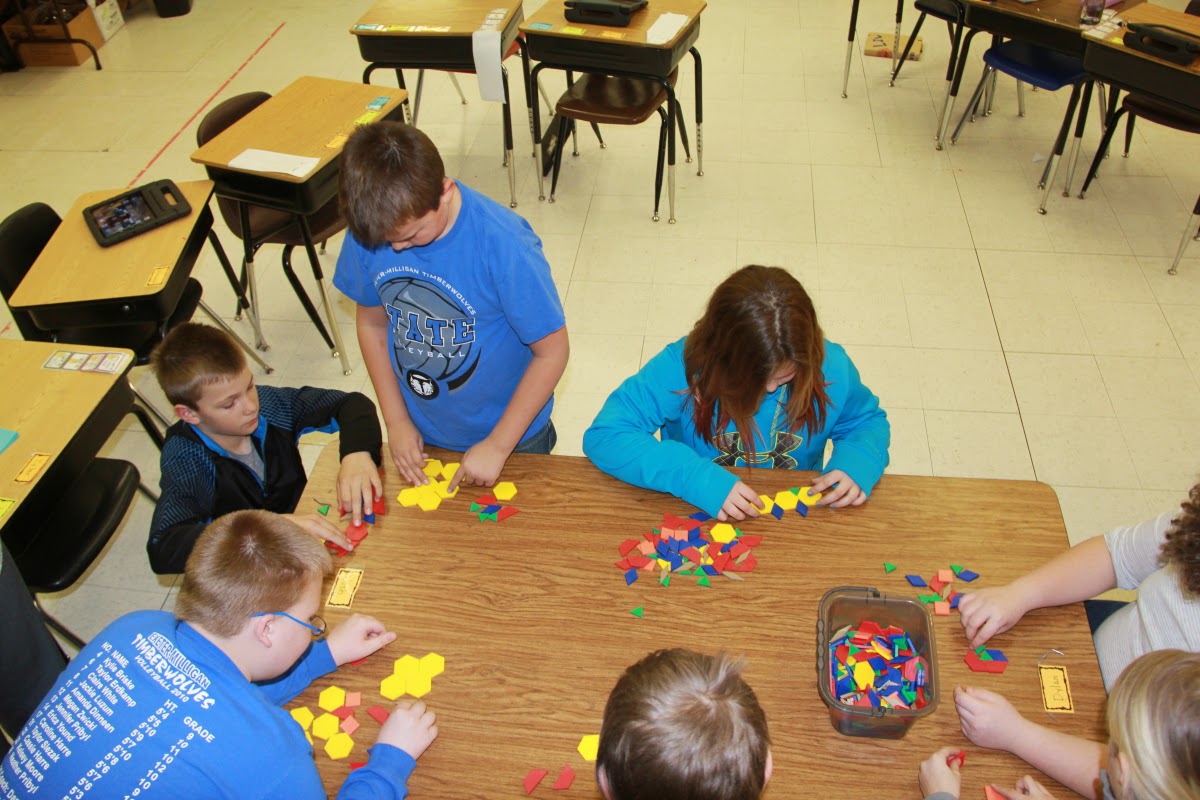 Above: The fourth grade class all works on their tessellations.
Below: Olivea Swanson makes a pretty pattern. 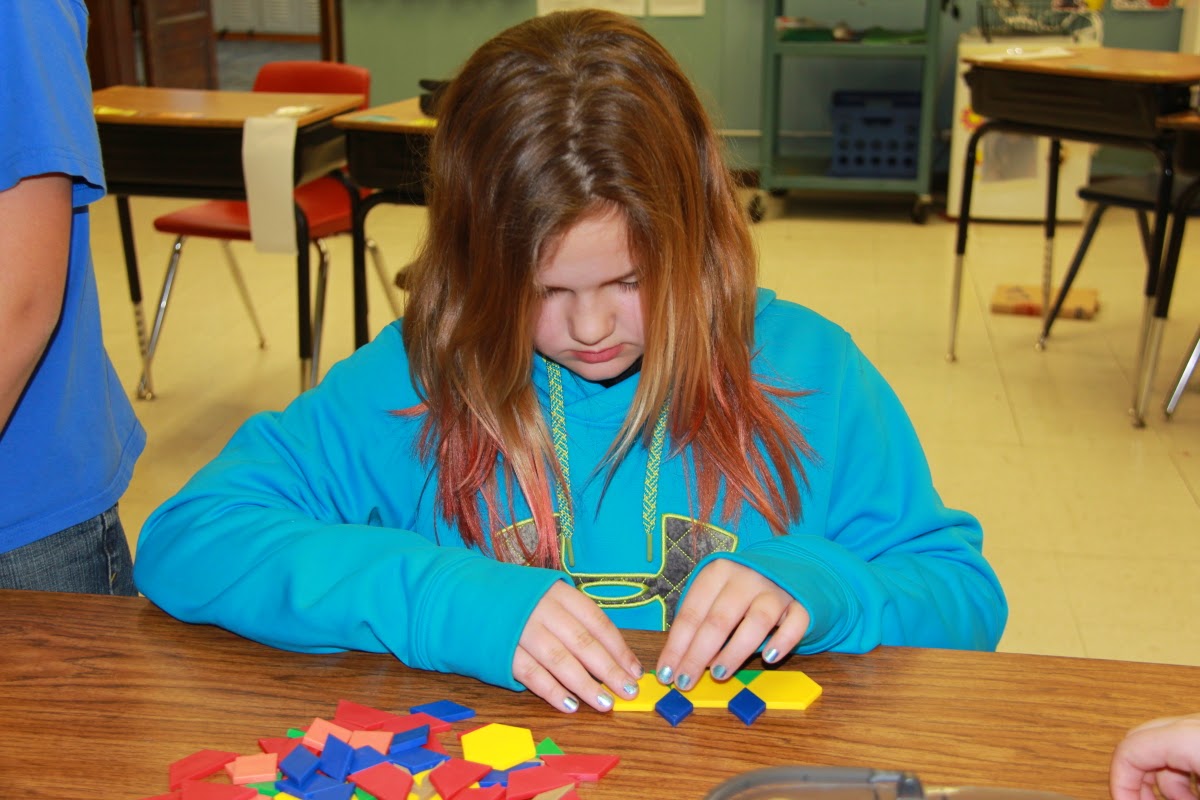 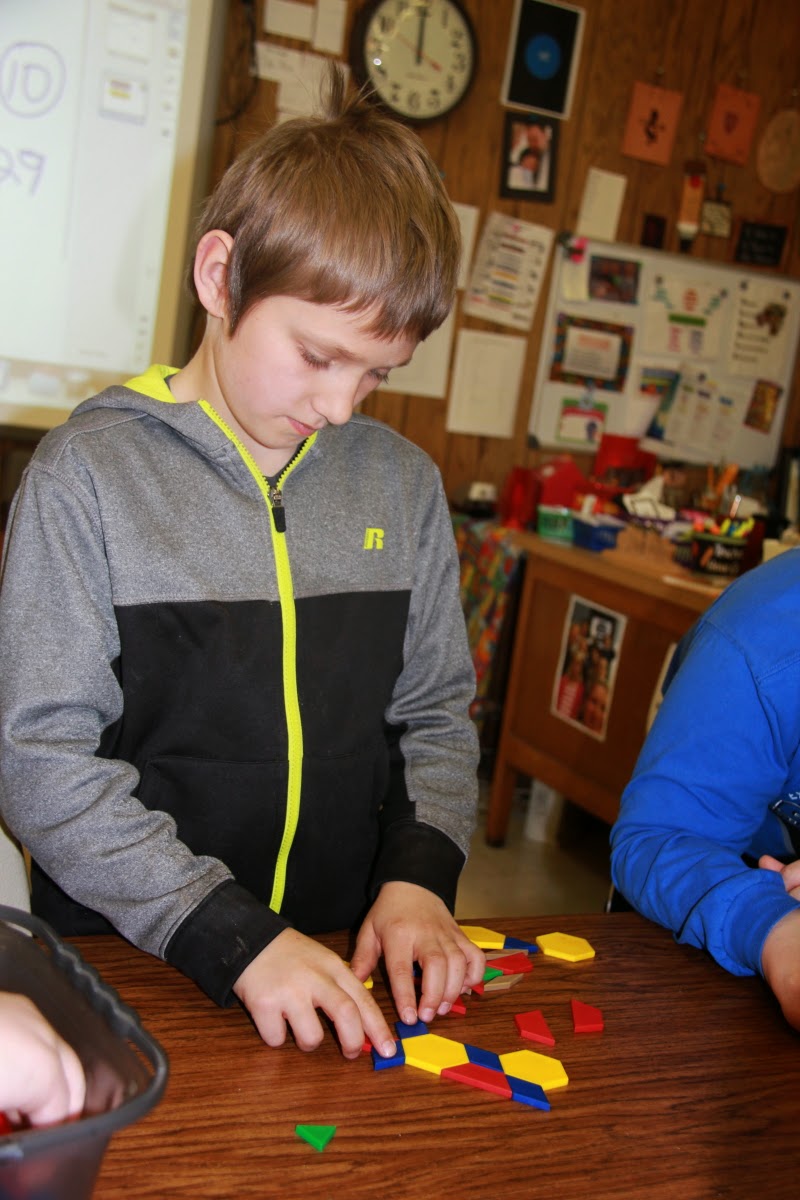 Above: Gabe Jindra makes some adjustments to his tiles to make a repeating pattern.

Below: Artwork the fourth grade class did using repeating patterns. 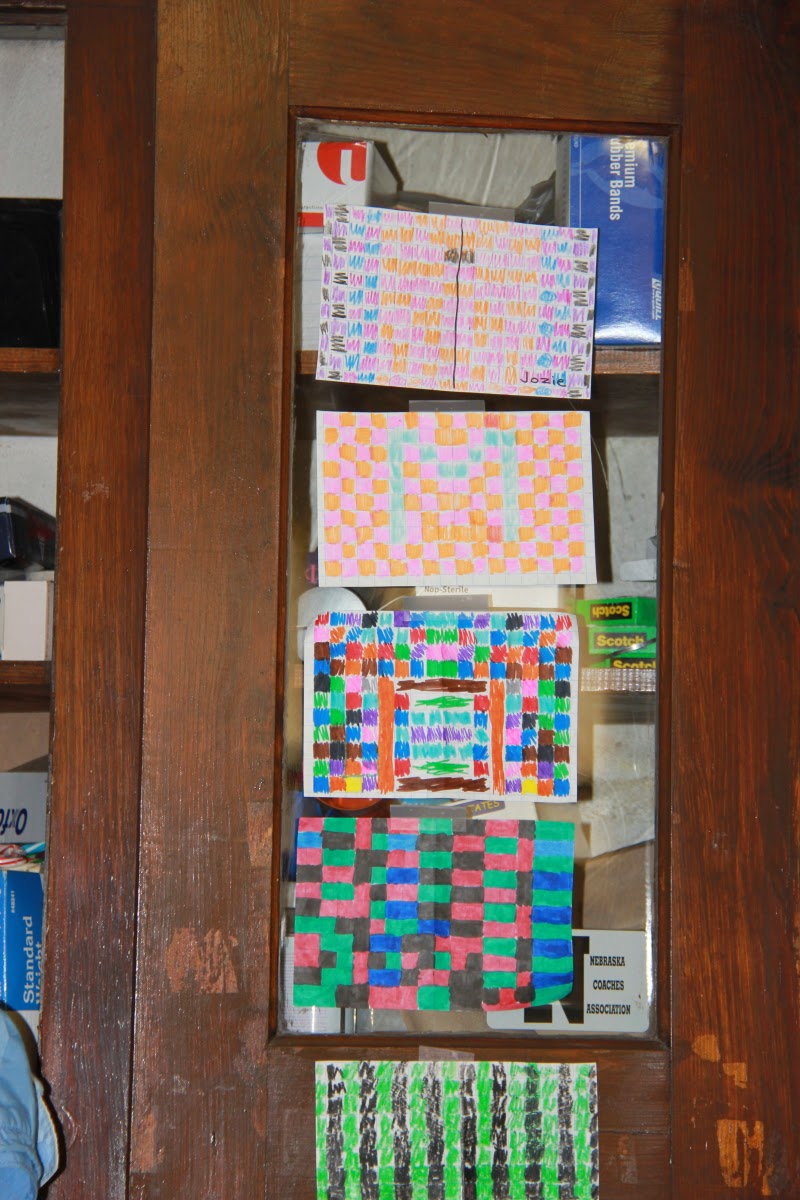 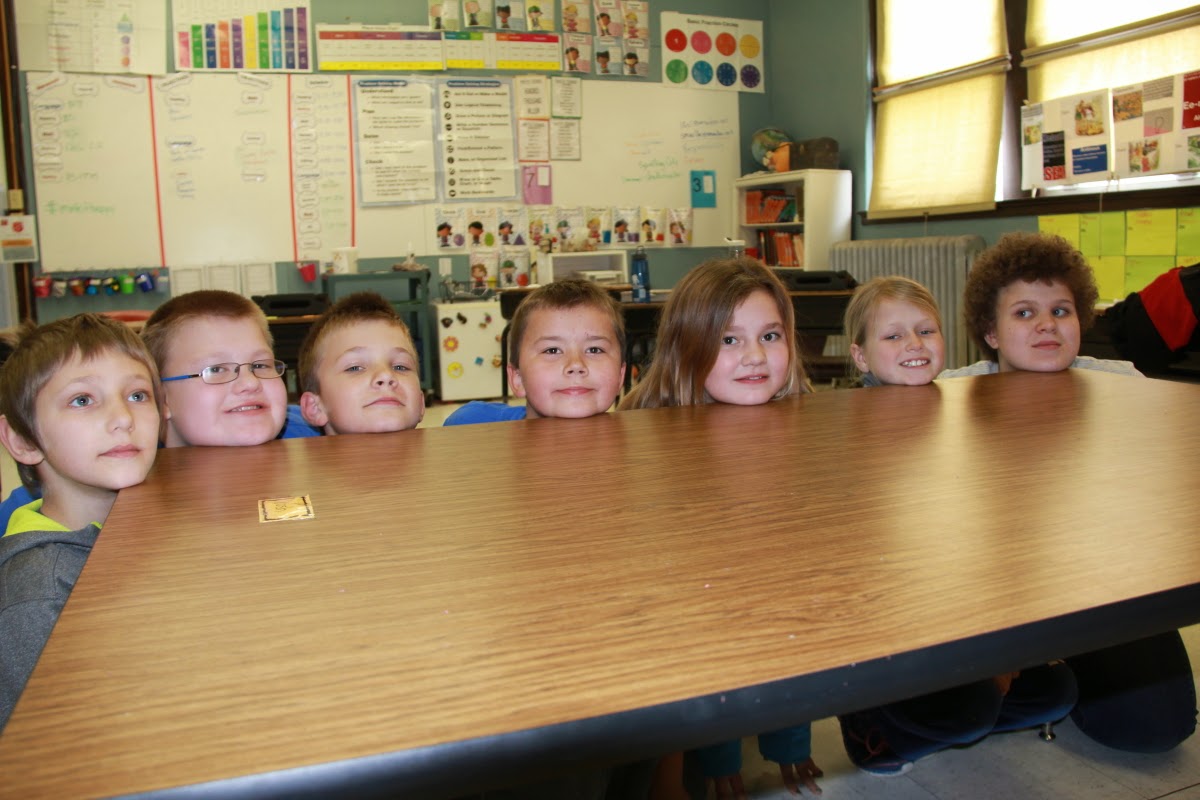 The Exeter-Milligan fourth grade class made be small with just seven class members but after gaining two girls this year they are definitely growing.

Their teacher, Mrs. Shelli Mueller has enjoyed the smaller class, “It is unique to have this size of class. They all get a lot of one on one attention during the day. With that being said, there are many personalities that I have come to enjoy and look forward to inspiring each day.”

Their typical day starts with reading, spelling and math.  This year, one change at the Milligan campus, is that the students have recess first and then have lunch.  After lunch they have language and then on Monday, Wednesday and Friday’s the students rotate between music, art and library. They end the day with science or Nebraska studies and writing. On Tuesday’s and Thursday’s the fourth graders have P.E.

One of the concepts the fourth graders are currently learning about is the process by which a rock forms, also known as the rock cycle.  Mueller described some of the tools they use to learn, “Using their Ipads, the student's took picture of the cycle I created on my computer, then they had to label the missing pieces using an app called Skitch. After the students have finished labeling their picture, they email me their assignment.”
Ipads are integral part of the learning experience in their classroom.  Each student has their own Ipad to use during the school day.

Fourth grade curriculum includes the study of Nebraska and this spring the third and fourth grade class will visit the State Capitol in Lincoln.  They will also tour Memorial Stadium and Morril Hall.  “This ties in perfectly as we finish the year and get the third graders ready for next year,” explained Mueller.
Posted by Leesa Bartu at 7:00 AM No comments: 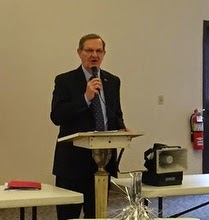 Patt Lentfer, Executive Director, thanked the FCDC investors, Board members, and committee members.  She also talked about the growth that has happened in Fillmore County and the growth that continues.  Lentfer said that creating a positive business climate and being ready for opportunities are the goals of the FCDC.  Currently we are working on a job fair/career day, on-line job board, housing development, becoming a Livestock Friendly County, and continue to partner with NE Department of Economic Development, utility partners and the Lincoln Area Development Partners as well as the Fillmore County Supervisors and community leaders.
Posted by Leesa Bartu at 7:00 AM No comments: 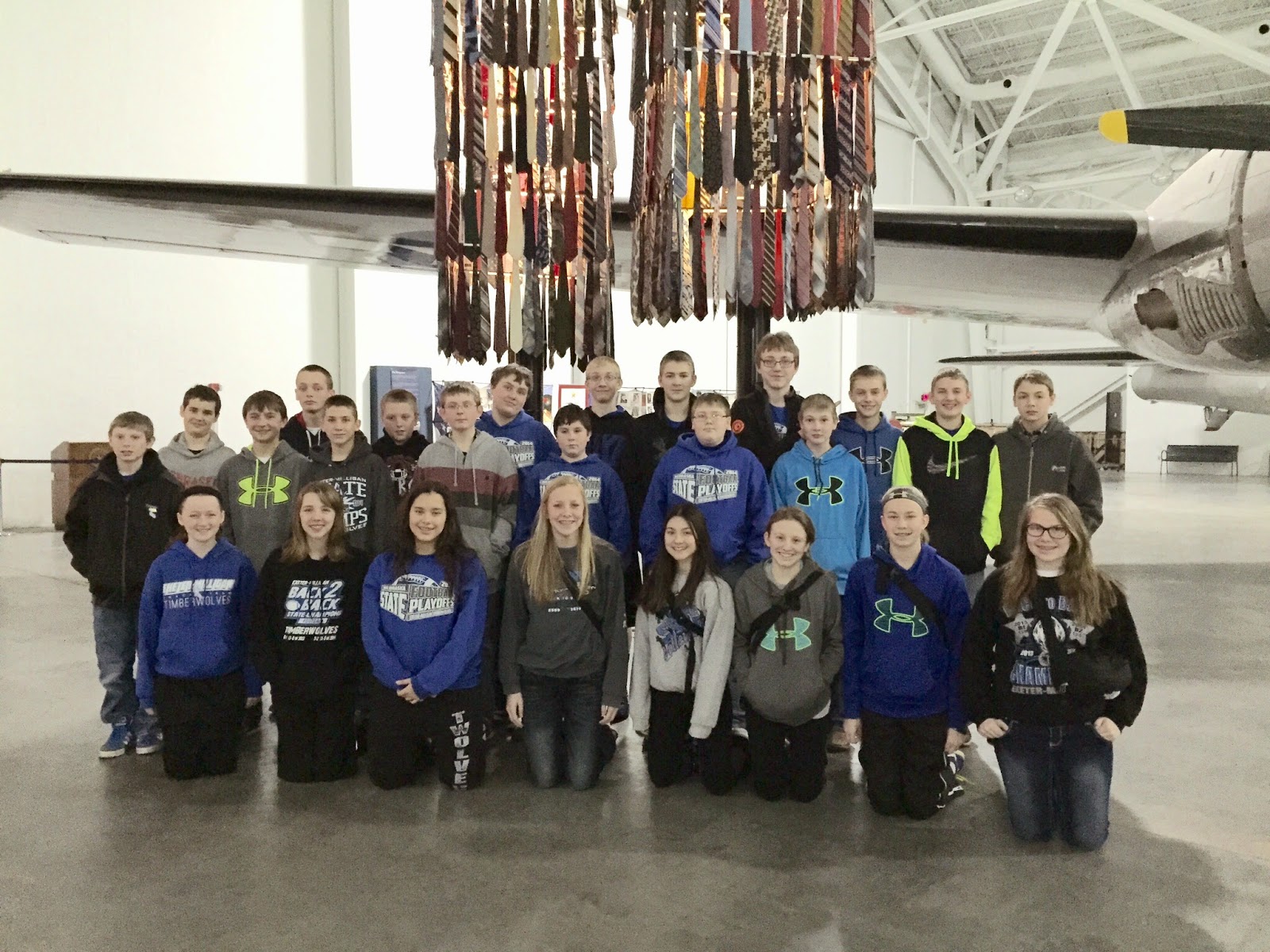 On Wednesday February 11 the 7th and 8th grade classes from Exeter-Milligan traveled to the Strategic Air and Space Museum. While there they were able to design their own airplanes, learn about engineering of cities, buildings and dams at the Tech City exhibit and watch a planetarium show about the race back to the moon. Pictured are those who attended posing in front of the two towers of ties. This art piece was constructed to represent the twin towers from 9-11.
Posted by Leesa Bartu at 7:00 AM No comments: 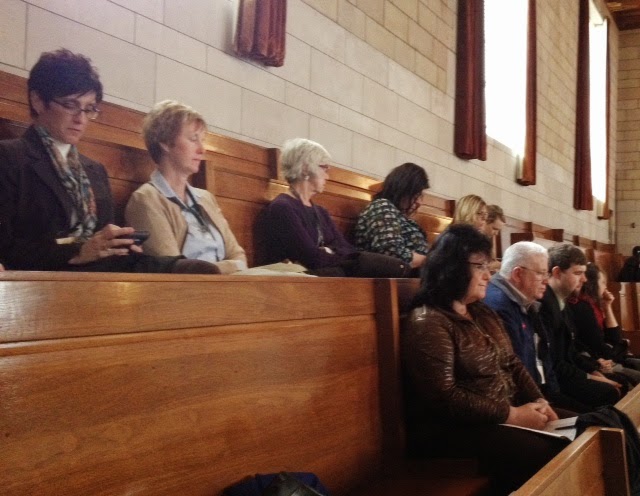 The 2014-2015 Odegeo...Leadership for Fillmore County class traveled to the Lincoln on February 15, 2015 to the State Capitol to learn more about the Unicameral and the issues in the Legislature.

The Leadership group began their day with Chief Justice Heavican presenting information about the Nebraska court system in the Supreme Court courtroom.  Next Kate Heltzel from the Unicameral Information Office gave an over of the unicameral.

Governor Ricketts then spoke to the group about 20 minutes and talked about many things he had presented in this “State to the State” address.  He also answered questions from the class members.

The group observed the Legislature when LB111 about requiring voter identification was presented and debated. Several different Senators spoke about the bill.  LB207 which changed provisions relating to civil penalties under the Nebraska Chemigation Act was passed while the group from Fillmore County was observing the Legislative body.

Senator Ebke then joined us for lunch at the Capitol.  She told us her first impressions of being a Nebraska Senator and talked about the committees on which she serves.  After lunch, Larry Dix, a lobbyist for the Nebraska Association of County Officials (NACO), presented information about the role of a lobbyist in the Nebraska Unicameral.