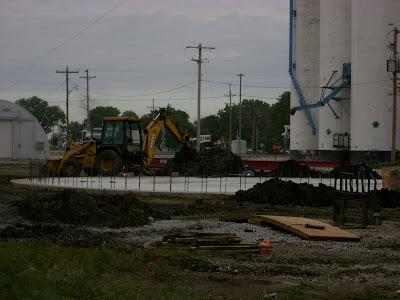 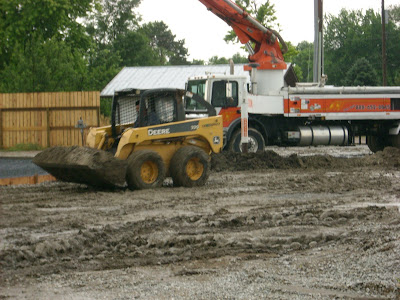 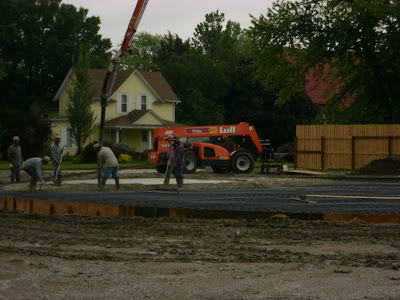 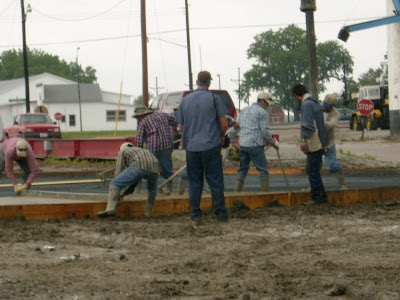 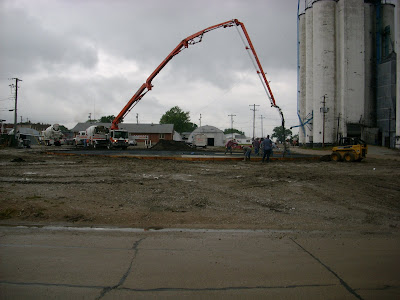 Photos here depict the pouring process of the floor with the top picture showing the floor completely poured.
Posted by Leesa Bartu at 11:23 AM No comments:

Bloodmobile - Get your appointment scheduled for June 26th

Do some good this summer and donate blood through the American Red Cross. many people in the United States view summer as a time to unwind and relax, but the Red Cross wants to remind everyone that the need for blood is constant.

Blood transfusions are needed for the treatment of many diseases and conditions, and for surgeries, By making blood donation part of your lifestyle, you help provide more than 38,000 pints of blood needed for patients at hospitals across the nation each day.

The need for blood is constant and the gratification is instant. Make an appointment to donate blood today and you can change a life, starting with your own.

In Exeter, the next blood drive will be June 26th from noon to 5:30 p.m. at the American Legion Home. To schedule an appointment call Doris Hall at 266-2841 or Ruth Ekeler at 266-8861. Remember to bring a Photo ID and drink plenty of fluids. Some of the requirements have changed recently to allow for more people to be eligible to donate blood. Check the requirements at givebloodgivelife.org to find out more.
Posted by Leesa Bartu at 10:21 AM No comments:

Starting June 1, smoking indoors will be banned in all public enclosed spaces. The ONLY exemptions are up to 20% of hotel rooms (with some specifications on how they are marked and where they are located), places where smoking research is being conducted, and private residences. Smoking is NOT allowed in private residences that are used for child care operations while the children are present, and the child care facility operator must inform the parents if smoking will be allowed indoors off-hours. Bar/restaurant owners who want to construct an outdoor area for smoking (i.e. beer garden) should make sure they comply with the guidelines put forth by the state, or they could be cited or barred from allowing smoking in that ‘outdoor’ location as well. Violations of the law are a Class 4 or 5 misdemeanor depending on violation history. A citation comes with between $100 and $500 in fines – individuals as well as business owners/managers who refuse to comply with the law can be cited and fined. Complaints about individuals who refuse to comply with the smoking ban should be directed to local law enforcement (non-emergency number). Public Health Solutions will respond to complaints about owners/managers who refuse to comply with the law. Both entities are authorized to conduct compliance inspections.

for more information you can visit the public health solutions website at
htpp://www.phsneb.org/smokingbanforresidents.html by clicking on the underlined words
Posted by Leesa Bartu at 12:36 PM No comments:

Village of Exeter Board Meeting Agenda 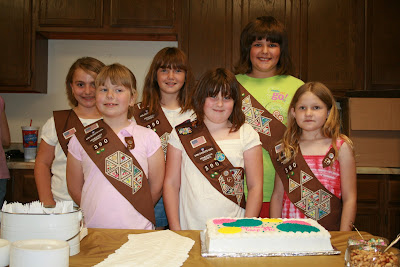 Exeter Girl Scout Troop 390 are pictured at their awards tea. Pictured in the front row from the left are Macy Due, Vicki Androyna and Janey Erkdamp. Second row from the left are Kaitlyn Vavra, Hannah Beethe and Tara Mueller.
The Exeter Girl Scout Troop 390 celebrated the last year's achievements on Saturday afternoon with a afternoon tea. The girls welcomed their families and friends and opened with the pledge of allegiance and the girl scout promise.

Leader Becky Erdkamp explained the five badges the girls earned this year. In November they earned "Wave the Flag" in which they learned about the flag, made patriotic bracelets and celebrated Veteran's Day. In December the girls earned the "People are Talking" badge. They did all kinds of role playing and listening games. They also learned skills to practice being kind to others. The group were part of an adopt a family project at Christmas time and shopped for a girl their age who was in need.

In January, the group started learning about their upcoming cookie sales and then in February they earned the "Make it eat it" badge. They learned about nutrition, planned a menu and then made their own lunch. In March they worked on the "Travel Right" badge. They decorated travel bags and prepared to pack for a trip. The girls worked on travel journals.

The final badge they earned was the "Recycling Rocks" badge. For this project the girls made posters showing the items that are recyclable in Exeter and what happens to the recycled material. They also, along with the Exeter Cub Scouts, held a recycling fair in Exeter to help the community learn more about recycling.

The girls moving into fourth grade this fall will now be Junior girl scouts. This summer the girls hope to attend a camp nearby and will also have a summer outing. They are lead by Becky Erdkamp, Sherri Due and Anita Mueller.
Posted by Leesa Bartu at 10:24 AM No comments: